Tuesday, June 28
Trending
You are at:Home»News»Ottery St Mary»‘There’s nowhere else we would rather be than Ottery St Mary’ – fire-hit family thanks town for new shop support

Ottery has celebrated the reopening of a much-loved shop – 10 months after its firefighter owner battled to save the business as a blaze raged above.

Martin and Lyn Shaw said they were ‘overwhelmed’ by support when The Pine Store, in Broad Street, was relaunched as Otter Furniture on Saturday.

The store had to shut down due to water damage after fire destroyed an upstairs property in the autumn last year.

Jets used to stop the blaze spreading through the building damaged stock downstairs at The Pine Store, leaving Martin and Lyn with no choice but to close.

The support from the town has been very nice and much appreciated. People have kept an eye out for us.  We have been overwhelmed.“There’s nowhere else we would rather be than Ottery St Mary.

Martin, 45, a retained watch manager at Ottery St Mary Fire Station, said he had been ‘overwhelmed’ by the support from the town since the blaze.

He and Lyn thanked the crowd who waited patiently to get a first glimpse of the shop’s new interior, which until Saturday’s unveiling had been shrouded in secrecy behind covered windows.

Martin, of Jesu Street, Ottery St Mary, said: “It seems like half the town has been waiting for us to open.

“It’s been the same for the last ten months. There’s not been many occasions when someone hasn’t stopped us in the street and said ‘when are you coming back?’.

“At one point it took us an hour to get back home from Sainsbury’s, because people wanted to talk to us.

“The support from the town has been very nice and much appreciated. People have kept an eye out for us.  We have been overwhelmed.

“There’s nowhere else we would rather be than Ottery St Mary.”

Jackie Parsons officially opened Otter Furniture, cutting the ribbon; Jackie has worked opposite at Coles, where she has been with the family business for almost 60 years.

Martin said her involvement ‘tied it all up and completed the circle’ because Coles was originally on the site of Otter Furniture.

When the town’s fire crew pagers sounded last September, Martin and his son, Kristian, 20, a retained Ottery firefighter, responded to the shout; the fire was above the family business.

I was at home when I got the call. I got on my pushbike and screeched to a halt outside.

Martin, a firefighter for 12 years, said the fire call had been harder for his wife, Lyn, 40, who had to watch on from outside the shop and wait for news.

He said: “I was at home when I got the call.

“I got on my pushbike and screeched to a halt outside.

“I am luckier than most people. I could go in and look at what I could do.

“I had something practical to do; I could detach myself.”

Martin added: “Because the fire was in the loft it was a bit smoky in the shop because of the water we were putting in the top.

“It was more water damage in the shop than smoke damage; we had to put water on it to stop it spreading.

“We came in the next day to clear everything out.” 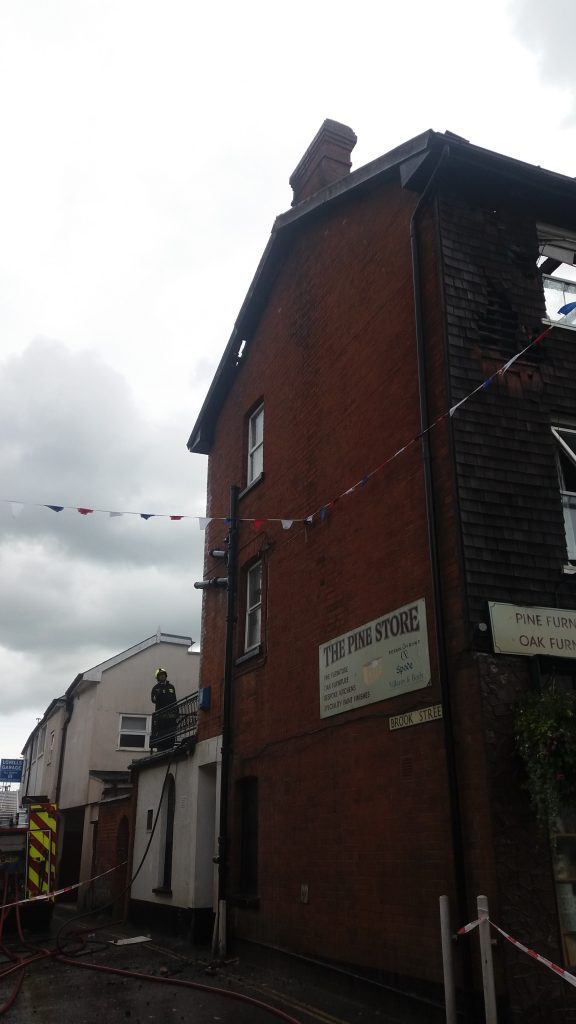