Millions of pounds have been pumped into Exmouth by a developer building hundreds of homes in Littleham.

Taylor Wimpey has announced it has given £2.2million to ‘improving the area’ around its Plumb Park development, boosting transport links, health, school and community services in Exmouth.

The developer has also backed Exmouth Sea Cadets with a £500 donation, plus Marpool Primary School with £100 for pupils’ World Book Day celebrations.

Some £2.1million has been handed to East Devon District Council to spend on infrastructure in Exmouth; schools, health centres, libraries, community and youth facilities.

A further £87,000 has been handed over for a bus service, offering transport links to other areas.
The developer said it will pay £170,000 to South West Water to upgrade the drainage network. 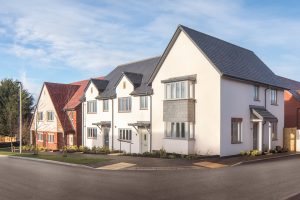 Millions of pounds have been pumped into Exmouth by a developer building hundreds of homes at Plumb Park, in Littleham.
Photo: Taylor Wimpey

Melissa Langton, Taylor Wimpey Exeter spokeswoman, said: “What we do is about so much more than simply building new homes.

“Through funding agreements with local councils and service providers, as well as sponsorship of community groups and charities, we aim to leave a lasting legacy around all of our developments.

“We take pride in our work and we’re pleased to be able to give so much back to the Exmouth area through Plumb Park.

“We hope that both our customers and their new neighbours will benefit from these contributions for many years to come.”