Now the band have financially backed Claire Allinson, of Morton Crescent, Exmouth, and the Oarsome Foursome team, for an undisclosed amount.

The star’s surprise windfall means the women’s row team are just £10,000 away from their £100,000 target allowing them to compete.

“It’s all because of Anthony Martin and Chris Martin. They are just amazing people.  They have gone above and beyond with their kindness. It’s unbelievable; they believe in our story…

Coldplay fan Claire had plucked up the courage to tell Chris Martin’s dad, Anthony, about the Oarsome Foursome’s challenge at a chance meeting earlier this year.

She said Coldplay’s cash had been a secret donation, made public only after the women asked for permission to display the band’s logo on their boat, with their other main sponsors, MuTu System, ReSound and Crown Records Management.

Married Claire, aged 45, said time had been of the essence because the wrap for the boat displaying the team’s sponsors was booked.

Coldplay’s logo as it will appear on the Oarsome Foursome’s boat.

She said: “We had been in discussion with the Coldplay team. Initially it was to be confidential.

“I asked Anthony if there was a possibility he could speak to Chris. I know he’s a massive philanthropist, but quite private.

“Anthony Martin phoned me when we out on the boat. He left a message saying would I call him back.

“Anthony said ‘if you want to give me a call, I may have good news for you’.  He had phoned Chris and talked it through at length.

“It’s all because of Anthony Martin and Chris Martin. They are just amazing people.  They have gone above and beyond with their kindness. It’s unbelievable; they believe in our story.

“We are four normal women and we got exceptionally lucky. We got heard by Anthony Martin.” 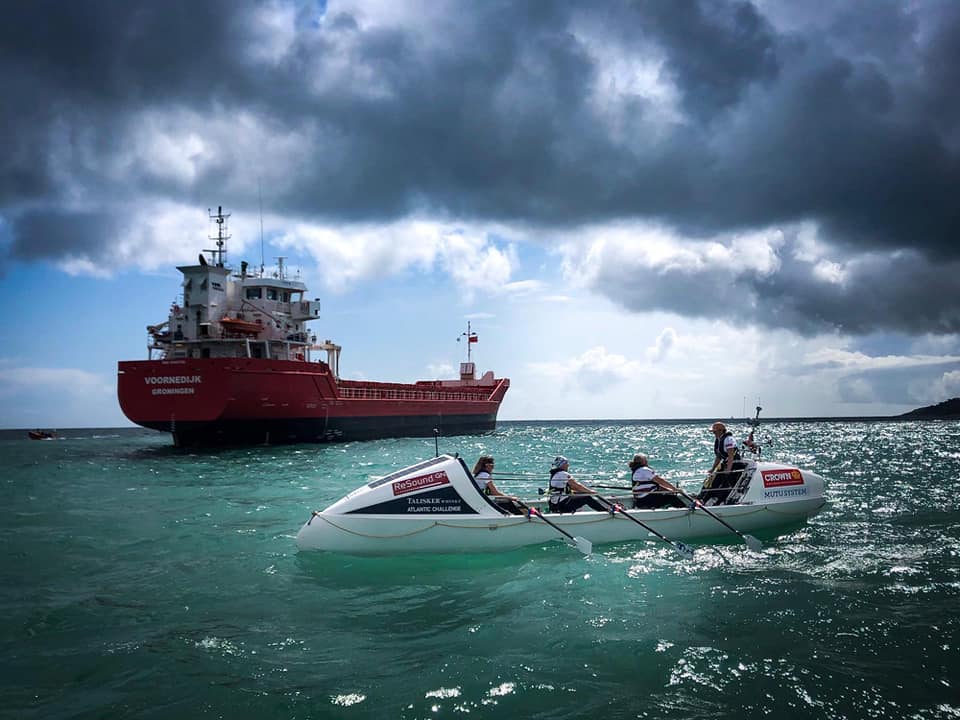 Coldplay have financially backed Exmouth’s Claire Allinson, and the Oarsome Foursome team, for an undisclosed amount.
Photo: with permission.

Alongside Claire tackling the 3,000-mile, Talisker Whisky Atlantic Challenge – billed as the world’s toughest row – is Bird Watts, from Mevagissey, her mum, Mo O’Brien, who is deaf, from Penzance, and Linda Whittaker from Gorran Haven.

Claire, a non-rower taking up the six-week row challenge to raise funds for Exmouth and Lympstone Hospiscare, said Coldplay’s support came after she spotted the singer’s dad, Anthony, at Powderham Castle at a garden event, where the Oarsome Foursome’s boat was on display.

Claire told Chris’s dad about the Oarsome Foursome’s Atlantic crossing, took him to see the boat, and spoke about each women’s personal reasons behind their choice of charities.

When the Coldplay singer wrote to fans on social media about the women’s row team, he said his dad, Anthony, had told him about the Oarsome  Foursome. 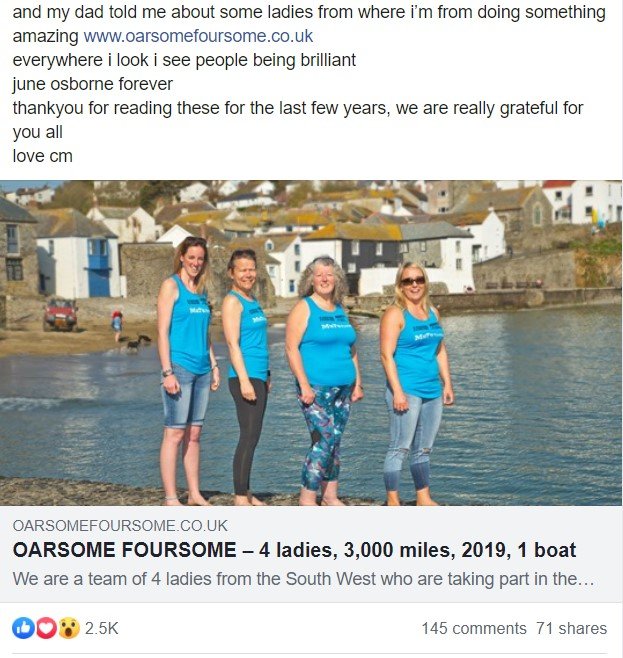 Chris Martin told Coldplay fans: ‘My dad told me about some ladies from where I’m from doing something amazing www.oarsomefoursome.co.uk
Everywhere I look I see people being brilliant.’

Claire said: “Discussions began with the Coldplay team after the August bank holiday.

“They decided to back the Oarsome Foursome financially as well as on social media.

“We received an email that Coldplay will back us financially, for an undisclosed sum.

“I was sitting with a client at work when I checked my email. I couldn’t comprehend what happened.

“I forwarded the WhatsApp message to the team and it all went wild for about half an hour.

She added: “I just can’t believe what happened. It’s surreal. It hasn’t sunk in one bit.

“The team think it’s absolutely amazing; this challenge would not be possible without all the support of every single sponsor, for which we are wholly grateful for.” 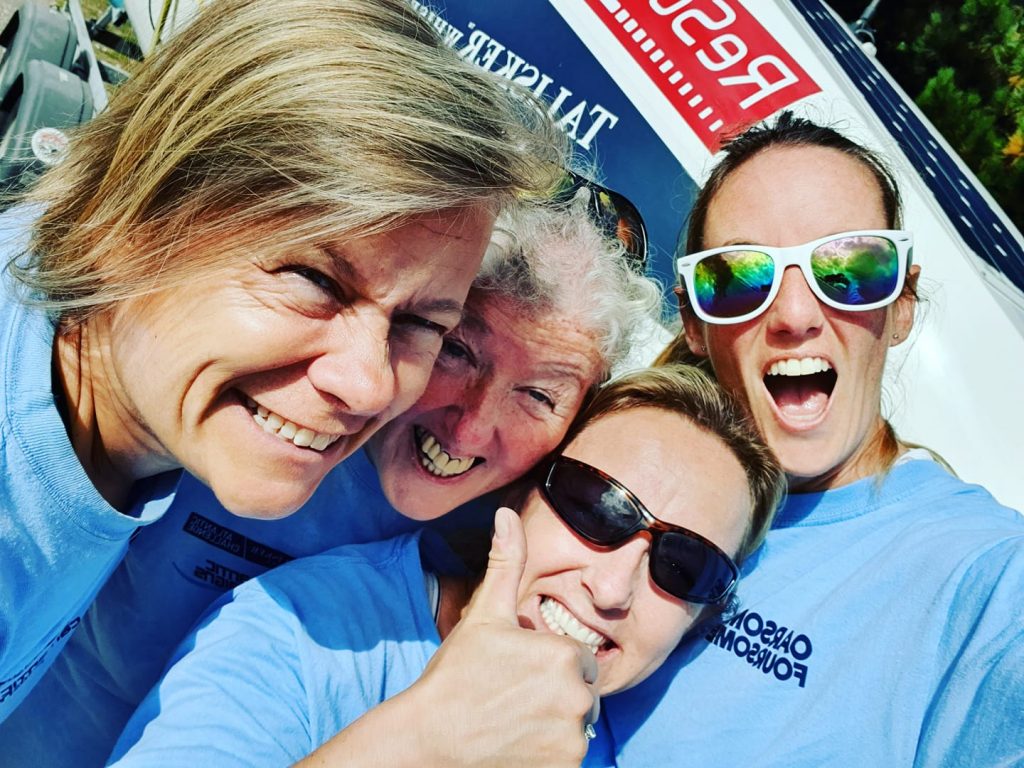 We received an email that Coldplay will back us financially, for an undisclosed sum…

“When we found out Coldplay was sponsoring us, we were really excited.

“They join MuTu, ReSound and Crown Records Management as major sponsors together with many more from across the South West.”

Bird and Mo will hold the world record for the oldest mother and daughter team.

The women are waiting for conformation to learn if Mo will become the first deaf rower to cross the Atlantic.

The Oarsome Foursome set off from San Sebastian in La Gomera, the Canary Islands, on December 12, rowing more than 3,000 miles to Antigua, arriving at Nelson’s Dockyard English Harbour on January 23, 2020, if all goes to plan.

Throughout the challenge, the team of four will work on two-hour on, two-hour off basis, continuously rowing in pairs.

After the Atlantic row challenge, the team will sell their boat and all the kit, sharing the funds between Exmouth and Lympstone Hospiscare, Cornwall Blood Bikes and Carefree.

To sponsor the Oarsome Foursome see the team’s JustGiving page. For more information about the challenge, see the website.