Monday, January 24
Trending
You are at:Home»Features»Exeter: Fifty years of fundraising and Major Geoff is still campaigning as he turns 104!

A tireless Exeter fundraiser who has spent half-a-century championing and helping people with learning disabilities is still campaigning – at the age of 104.

Major Geoff Bird MBE celebrates his birthday on Friday, March 26, and ‘is still able to write a good letter to his MP’.

He has marked the special occasion by reflecting on decades of kind deeds for good causes.

Even now, at 104 he hasn’t stopped campaigning and he is still able to write a good letter if needed to his MP!

Geoff joined the Navy in 1940, transferred to the Army as a private before rising through the ranks in the Royal Hampshire Regiment, serving in both Italy and Greece.

He began raising money in the late 1960s alongside his late wife Molly following the birth of their severely disabled son Christopher.

Recognising the dearth of facilities for disabled children at the time, the couple’s first major fundraising efforts focused on providing Christopher’s school, Ellen Tinkham, with an indoor, heated hydrotherapy pool.

Geoff and Molly’s fundraising efforts involved various schemes – one of which was Molly writing to Devon and Cornwall’s 200 or so arts societies, urging them to donate pictures for the cause. Many did, and the pictures were sold at auction.

Another was slightly more opportunistic and involved selling drinks to thirsty holidaymakers stuck in traffic.

Geoff said: “It was one afternoon, a Saturday, and the A30 was closed. It was hot and it so happened that the summer holiday traffic was diverted down our road and went right past our front garden.

“Well, there was an opportunity and, along with our neighbours, we purchased some lemon and orange essence [cordial]. We diluted it and started selling out of plastic cups for 6p a cup.

“We raised a fair bit – until the police objected of course and put a stop to it!”

Then, around 1972, Geoff and Molly, on behalf of Mencap, purchased a plot of land in Exwick and again began fundraising – this time to build and equip a day centre for school-leavers.

Up to that point the only option for the severely disabled was the Nichols Centre in Polsoe Road, but to use that clients had to be able to look after their own personal needs.

Geoff added: “There was nowhere for those with more severe disabilities to go, and we knew we had to do something.”

The day centre, called Treetops, was one of the first of its kind and Geoff and Molly then passed the management of the facility to Devon County Council.

By 1976, the couple had raised enough money to build a six-bed accommodation unit so parents could stay overnight.

Such was their contribution to those with learning disabilities in 2008, when the facility was moved to Exeter, it retained its ‘Treetops’ name in honour of their original project. 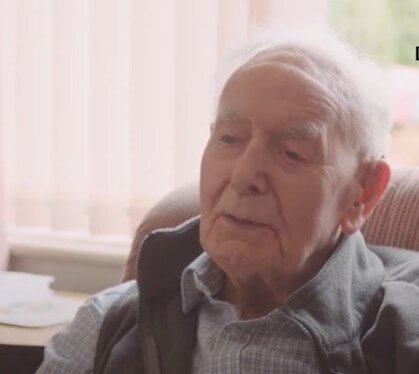 Geoff was a prolific campaigner and champion for the disabled. Alongside countless other fundraising activities he also found the time to hold positions on various health governing bodies and hospital boards.

He was chairman of the Community Health Council, an NHS watchdog, chairman of governors at Ellen Tinkham, and was constantly fighting to improve standards of care in the sector.

It was while sitting on the Royal Western Counties management board he helped persuade Exeter NHS to close its long-stay institutions for the severely disabled.

During the 1960s and 1970s it was common practice around the UK for the severely disabled to spend their lives in such facilities.

Unfortunately, with Covid-19 I can’t do much this year and see people as I would have liked to…I’ll make sure I make up for it on my 105th…

At the time more than 1,600 people were kept in six hospitals, in wards of up to 50, including at Starcross and Langdon Hospital.

Geoff said: “Exeter’s NHS had always been particularly progressive, but I’d like to think I gave them some gentle encouragement.”

And he did all this while working full-time as a surveyor for HM Customs and Excise and bringing up a severely disabled son. Christopher is now 67 and lives near Geoff and his daughter Janet.

In his ‘retirement’, Geoff wrote his wartime memoirs and he is still president of Exeter and District Mencap.

He was awarded the MBE in 1999 for services to the community.

Sophie Holmes, co-chair of the Learning Disability Partnership Board, said: “We want to wish Geoff a very happy birthday.

“His contribution over many years has been immense.

“Today, it is widely recognised that people with learning disabilities want to have the same opportunities as everyone else but in the 1960s and 1970s this wasn’t the case and Geoff has consistently been a champion for change, making a difference to the lives of so many.

“Even now, at 104 he hasn’t stopped campaigning and he is still able to write a good letter if needed to his MP!”

Geoff added: “I’m flattered that so many people are wishing me a happy birthday.

“Unfortunately, with Covid-19 I can’t do much this year and see people as I would have liked to, but I have many cards and notes from people sending me their best wishes.