Friday, September 17
Trending
You are at:Home»News»Exclusive»Exmouth OAP parked mobility scooter in her bathroom and had to use neighbour’s shower during two-year council battle for safe storage

Pensioners keeping mobility scooters in council flats in Exmouth for two years in a battle over parking are frightened they will die if the vehicles catch fire.

Residents of Dray Court, in Rolle Road, have spoken out about their ongoing frustration over the district council’s refusal to give them undercover storage outside where they can safely park their scooters.

Money has been offered to part-pay for permanent outdoor storage, but East Devon District Council (EDDC) denies any knowledge of the financial aid.

For the last two years pensioners have obeyed written council advice to keep mobility scooters inside their homes – but East Devon District Council now says the OAPs are following outdated guidance from a draft document that was never formally approved.

My neighbour kept hers at the bottom of her bed. I said that was dangerous. If it caught fire she would die. She couldn’t get out..

Pensioners were prompted to move mobility buggies into flats when EDDC banned the keeping of any property in communal areas of council-run homes, saying it was a fire risk.

But fear was sparked among the elderly when EDDC’s fire prevention crack-down included sending literature to Dray Court residents showing a burnt-out mobility scooter left in a communal hallway. 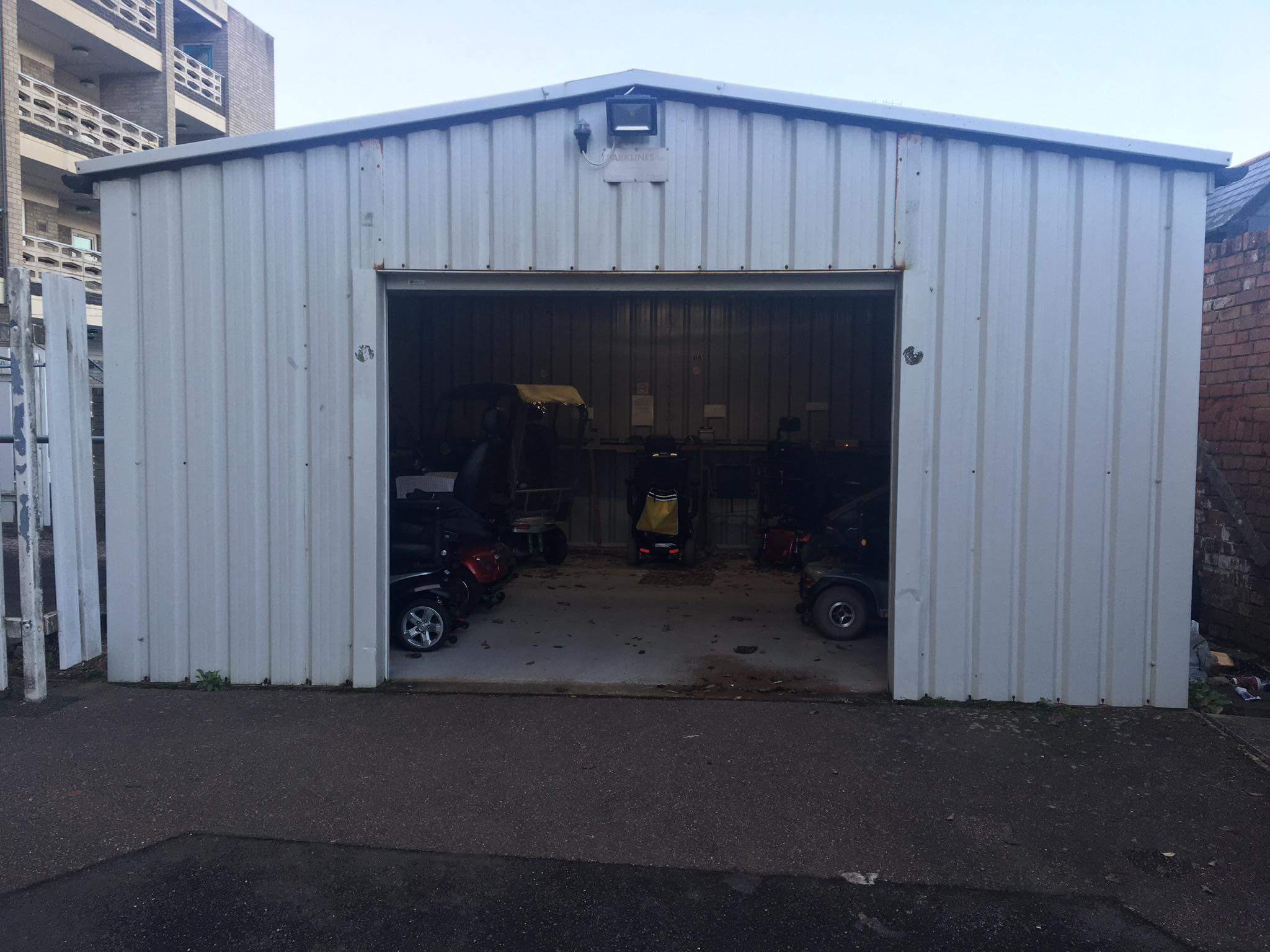 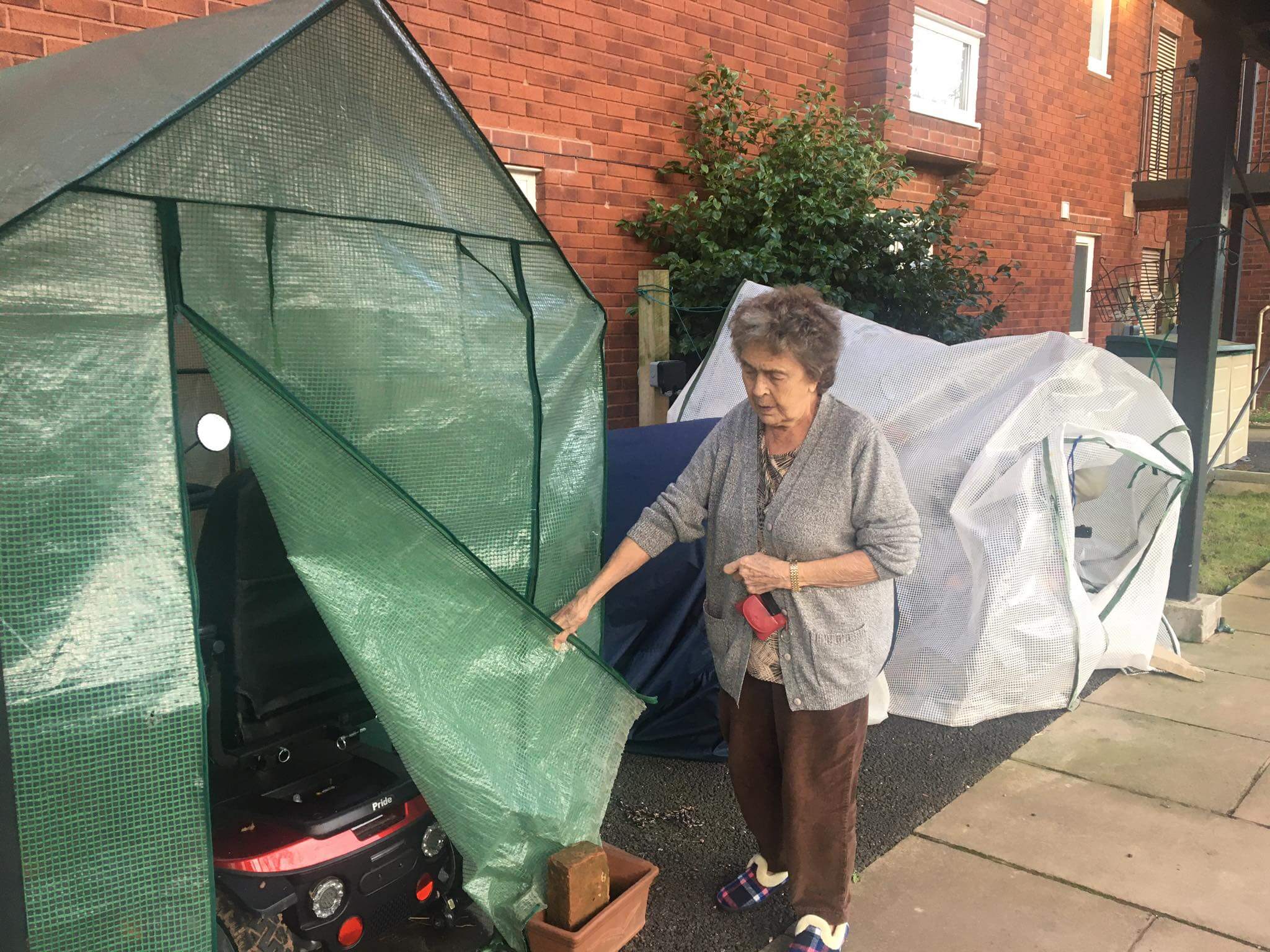 Until then, pensioners are continuing to live in fear, charging and storing scooters in flats, or struggling with makeshift plastic greenhouses used by the OAPs as temporary outdoor cover.

They doubt their mobility vehicles are covered by insurance unless they are securely stored, promoting pensioners to keep them indoors.

The great-grandmother, who suffered a stroke in 1993 and has arthritis of the spine, said: “They said we had to keep them in our flats.

“Mine was in my bathroom, I could just about get into the toilet. I used to go next door for a shower.

“They keep on about keeping the hall clear so we can escape, but how can we escape from them in our flats?

“They keep on saying it’s for the safety of the residents. One time they say one thing, and another time they contradict themselves. It’s been going on and on and on.

“My neighbour kept hers at the bottom of her bed. I said that was dangerous. If it caught fire she would die. She couldn’t get out. She sold hers. She had to drive her buggy into my flat to get it out.

“People don’t like to say a lot because they are frightened they will lose their flat, or be told to get out.”

Pat’s neighbour Catherine Greenland, aged 74, bought her mobility scooter with money left to her by her mum when she died.

She said insurance would not have paid out if the scooter had been stolen when stored outside at Dray Court.

Catherine sold it when the fear of it catching fire in her flat became too strong to ignore.

“I got so scared, I was really worried, said Catherine. “The battery can overheat and catch fire.

“My sister lives in Exton. The one I had, I could take it along the cycle path to see her and back. But when I became nervous about that [catching fire]I just had to give it up. As for using a taxi, I couldn’t afford that.

“I wouldn’t have a had a buggy if it hadn’t been for my mum sadly passing away and leaving me the money.

“I bought it for £1,900. It was just a question of putting it out the back and hoping it was still there in the morning.

“The chances of me getting another one at that price again is unheard of.

“Poor Pat has been battling this for over two years. People are nervous about it. They feel uncomfortable about it.”

An EDDC spokeswoman said: “We believe this draft document may have been issued in line with the draft Mobility Scooter Policy that was taken before a panel of tenants for their comment, and has never been formally adopted/ratified.

“Our current advice is to avoid storage in flats and use the facilities provided on site.”

She added: “We do not actively promote tenants to store mobility scooters or charge them in their home.

“Our recommendation is to use the charging points provided by EDDC.”

The offer of funds to part-pay for better storage at Dray Court has been ignored, say Devon County Councillors Richard Scott and Jeff Trail.

EDDC said ‘we are not aware of this’.

Until recently Pat used a plastic greenhouse to cover her mobility scooter. Now she shares a buggy with a neighbour.

Pat said: “Mine blew down. One blew out into the car park, so we thought ‘that’s not any good’.  There are one or two left.”

She added: “They have got to keep up with the times in this building. They should have thought of that before they had these flats as sheltered accommodation for people.

“For elderly people, if you can’t go out it’s like being a prisoner in your own flat.

“Elderly people come with walking sticks, wheelchairs and buggies, and we want a buggy park, covered over like Morgan Court.”

An EDDC spokeswoman said: “We have explored a range of options and consider that we have made adequate provision on the site.

“I have no knowledge as to why facilities were not as Morgan Court and cannot comment on the decision made to only provide external charging points with no cover.

“Any provision will have to be provided in the rear car park resulting in loss of parking spaces, also the car park is sloping and potentially dangerous for such users.

“It will be nigh on impossible to provide safe level access from such storage in the car park to the flats.”

Dray Court Exmouth EDDC Exclusive Exmouth picks top picks
Previous ArticleChemotherapy: my ‘waste’ is so toxic I have to flush the loo twice
Next Article Police call off search as missing Exmouth boy is found safe and well