Thursday, August 18
Trending
You are at:Home»News»Exeter»Care home plan for ‘derelict and deteriorating’ historic Exeter building is approved – despite opposition from neighbouring school

A ‘derelict and deteriorating’ historic building in Exeter can become a 64-bed care home after plans were approved by the city council.

The former Honeylands Children’s Centre in Pinhoe Road operated until 2012 – when it became surplus to requirements by the NHS – and has since fallen into disrepair.

Existing extensions will be demolished to make way for two new connecting wings.

There will also be new vehicle access from Pinhoe Road with a loop road being constructed in the site to accommodate 27 parking spaces.

Approval came despite strong opposition from the neighbouring Vranch House School, which provides education, treatment, and welfare for children with physical difficulties.

School representative Rebecca Wheeler told members the development would be ‘detrimental to the children we serve and the service we offer’.

She added: “Our parents feel that the intended use of the development, which is end-of-life care, is unfortunately extremely sensitive nextdoor to a school and centre that serves many children with life-limiting illnesses, some of whom sadly die during their time with us.” 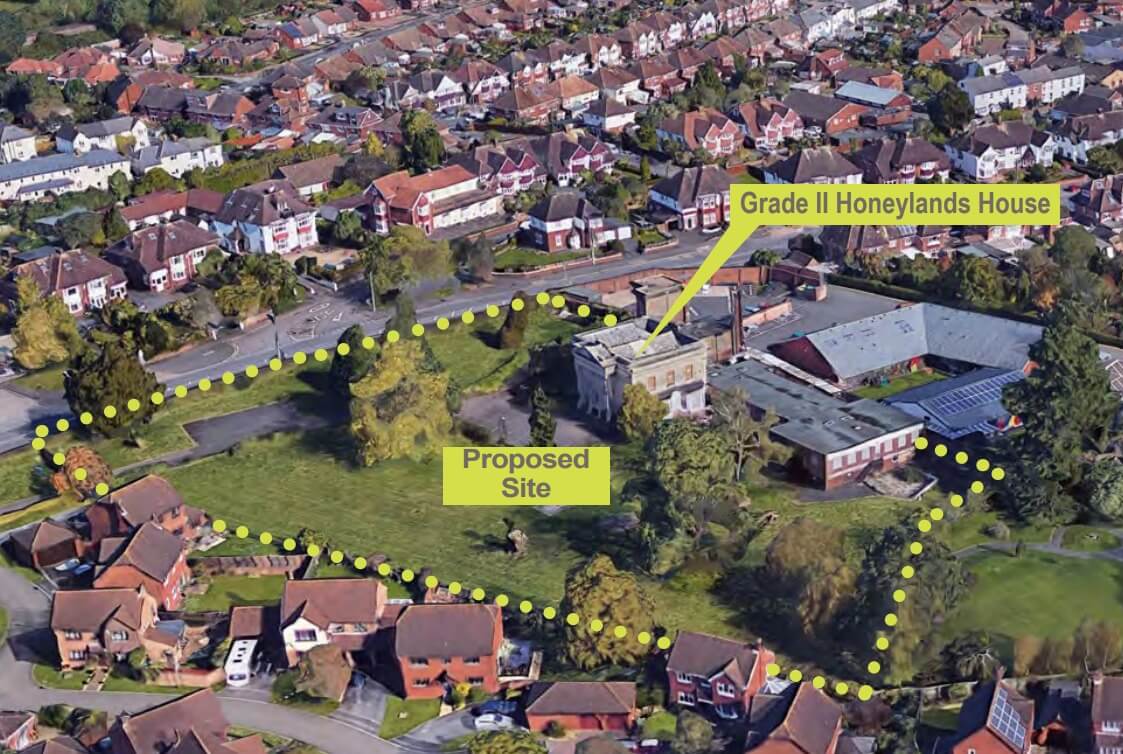 The development site at Honeylands in Pinhoe Road, Exeter. Image from the planning application

Applicant Andy Marshall played down privacy concerns and defended the design. He claimed the school was asked to ‘articulate exactly’ its concerns but had ‘not really been able to get a handle on exactly what those issues are’.

Mr Marhsall added that  the care home would be a ‘quiet neighbour’ and believed the two uses would work well next to each other.

He said the facility is ‘desperately needed by virtue of the increasingly-ageing local population’ – with 550 additional care beds needed in Exeter.

Mr Marshall said the scheme would free up ‘approximately 35 family homes’, create around 60 construction and long-term jobs, and restore a ‘derelict and deteriorating’ listed building.

“Our plan is to conserve the original features, remove the unsympathetic additions – the tower and the two-storey extensions – and develop the site in a more sensitive manner,” he added.

“Residents are likely to move from elsewhere within the city, be cared for by round-the-clock, 24-hour personal and nursing care on the premises, thus actually reducing the impact on GP services.”

Councillor Rachel Sutton said: “As far as I can see, there are no planning grounds on which it would be reasonable to actually turn this down.

“Any development on this site – next to a school which has pupils with very particular requirements is, I suspect, going to be disruptive whatever happens on that site.

“And I only hope the developers will stay in contact with the school and be sympathetic to them.”

Cllr Michael Mitchell added: “There is a need for this. It is a derelict site.”

He was also pleased with commitments made by Mr Marshall that the development would include air source heat pumps, solar panels and electric vehicle charging points.

“I just hope that there is a neighbourliness between the developer and Vranch House so that many of the immediate problems in regard to the development of the site can at least lead to a decent working relationship, so matters are resolved instantly rather than weeks or months later,” said Cllr Mitchell.