Sunday, June 26
Trending
You are at:Home»News»PHOTOS: Moo-chas grass-ias! – Exmouth firefighters come to the aid of a bullock trapped in a swimming pool in South Devon

These photos show how animal rescue specialists from Exmouth fire station helped free a bullock who took a late-night dip in a swimming pool at a home in South Devon.

The bullock, weighing 600 kilograms, had been in the water for around four hours when it was lifted to safety by the Exmouth crew and fire service colleagues.

Crews pumped water from the back garden swimming pool of a home in Paignton,  coaxed the bullock walk to a corner, fed webbing straps beneath the animal, and lifted it to safety using a telehandler.

Spotting the young bull was cold and had numb legs after his ordeal, firefighters held him in the harness until the animal was ready to stand and walk to a waiting trailer. 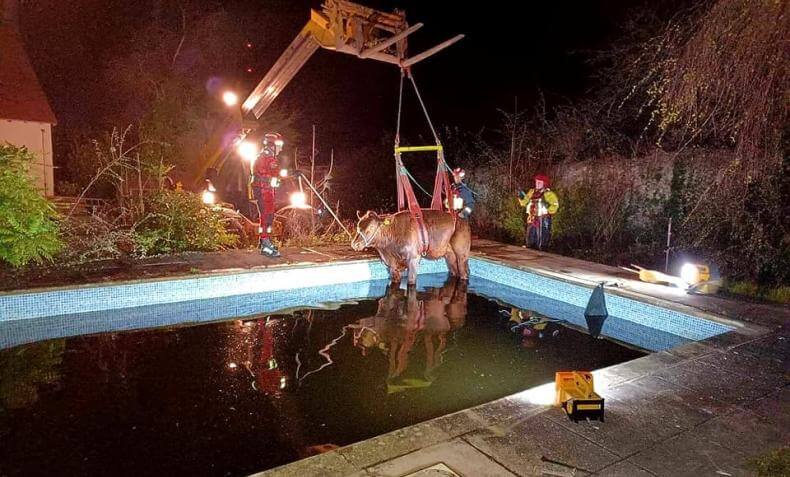 A telehandler was used to lift the animal out of the pool.
Photo: DSFRS. 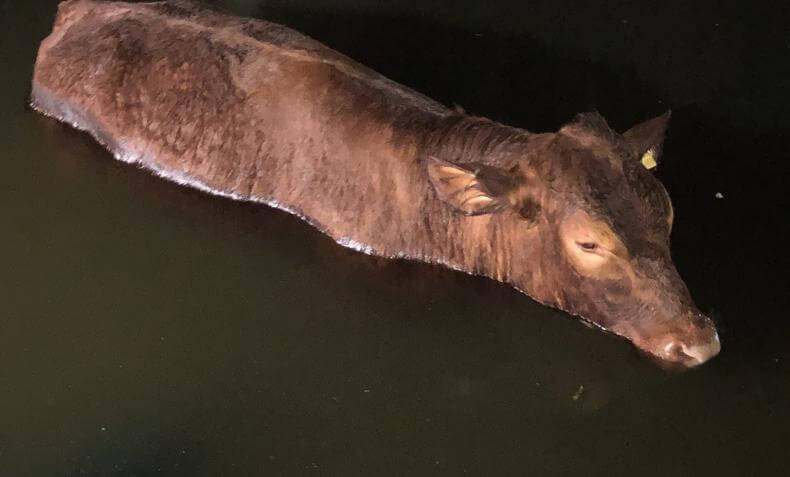 The bullock was coaxed to the corner of the pool.
Photo: DSFRS.

A Devon and Somerset Fire and Rescue Service (DSFRS) spokesperson said: “The homeowners were surprised to find a young bullock in their swimming pool after he decided to leave his field in favour of a late-night swim.”

They added: “Once the specialist animal team from Exmouth arrived, we all got together to discuss the best way to remove him from the pool, providing the least stressful way for the bullock and the safest option for our crews.

“Large animal rescues can be very dangerous due to the unpredictable behaviour of animals, so crew safety is paramount.” 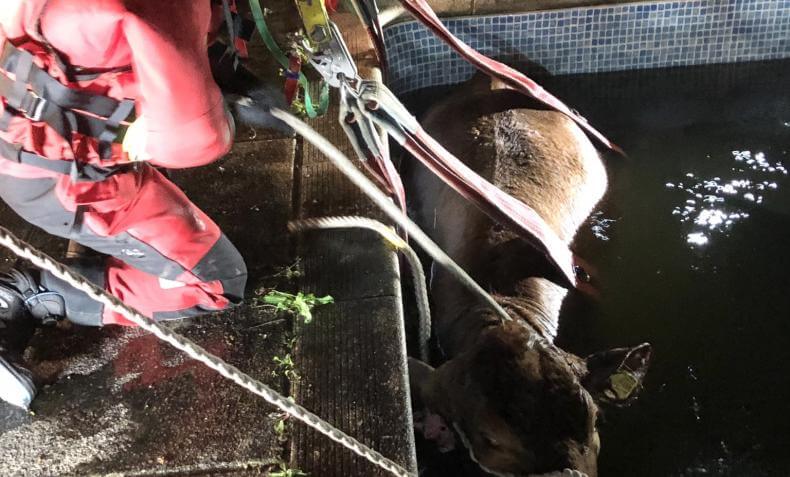 Firefighters fitted straps to the animal, to lift it free from the water.
Photo: DSFRS.

The fire service pumped water from the pool to enable the young bull’s hooves to touch the bottom, where he could be coaxed to walk a short distance into a lifting harness.

A vet was also at the scene during the rescue, overseeing the animal’s welfare.

The fire service said the animal was lifted out of the water by a telehandler and returned to its farmer owner, who was waiting with a trailer.

DSFRS said: “We had to pump some water from the pool to enable the bull – all 600kg of him – to put his feet down.

“When we started pumping out the water the bull seemed to swim along the pool and investigate the pump.”

The DSFRS spokesperson added: “Crews fed webbing strops under the bullock after getting him in the corner of the pool, then we brought in a telehandler to lift him out comfortably.

“Whilst this was happening, a local farmer positioned a cattle trailer ready for him to be put straight in.

“The operation went very smoothly. The bull was lifted, moved to the trailer, and was then held in the harness for a few minutes until he could support himself again.

“By this time, he had been in the pool for three to four hours and was very cold, with obviously numb legs.” 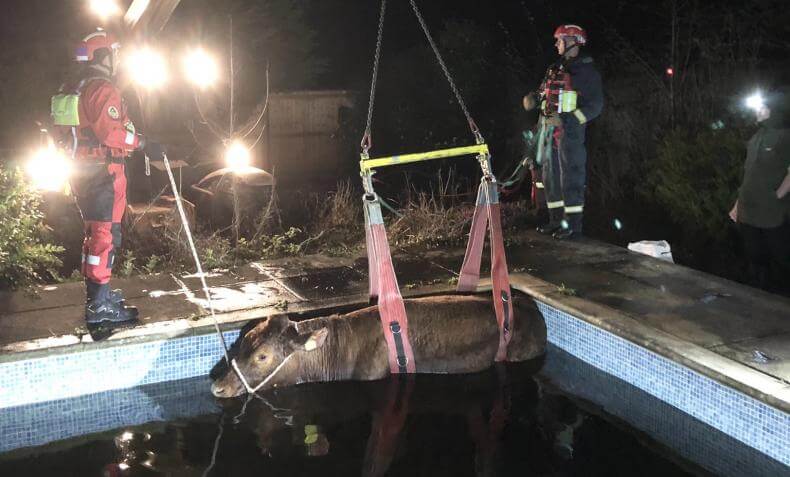 The bullock was fitted with a harness and lifted out.
Photo: DSFRS.

The fire service said the weight-bearing harness it used had a quick-release device. The design lessens the risk of any rescued animal panicking once free, keeping crews safe.

The DSFRS spokesperson said: “The harness we use provides the ability for the cow to stand just weight-bearing, but still supported by the telehandler, where we can then pull a toggle mechanism from outside the penned off area by the trailer.

“This means the harness just falls to the ground and the bull can walk away, keeping our firefighters safer.”