Tuesday, June 28
Trending
You are at:Home»News»Exmouth»You rock my world! Exmouth man asks girlfriend to marry him in museum geology gallery where they had their first date

An Exmouth dad-of-four announced his girlfriend rocked his world when he asked her to marry him in a museum geology gallery where they had their first date.

Joe McIntee got down on one knee and proposed to girlfriend Dawn, in Exeter’s Royal Albert Memorial Museum (RAMM), on the anniversary of their first date, hiding a ‘rock’ – an engagement ring – among one of the exhibits with the help of staff.

Dawn, who said ‘yes’ to Joe’s ‘shock’ marriage proposal, said the museum had been the ideal spot for the surprise ask.

She said: “I was so excited, and a little in shock. RAMM was the perfect setting for the proposal.” 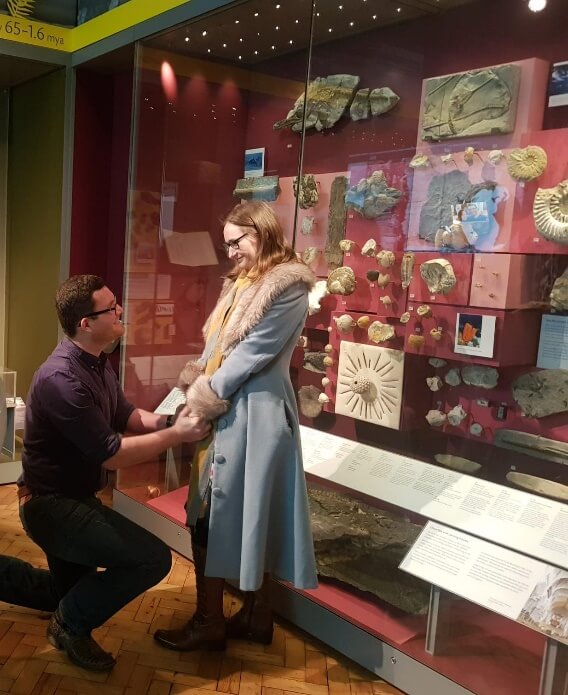 The moment of the proposal.
Photo: with permission.

Joe thanked museum staff who ‘went out of their way’ to help him hide an engagement ring in the geology gallery on the second anniversary of the couple’s first date.

A RAAM spokesperson said: “With the help of the RAMM team, Joe arranged to have a ring dangling from the tail of a 3D-printed model carnotaurus, his favourite dinosaur.

“The carnotaurus was hidden in the geology case, ready for Dawn to find it and say ‘yes’.

“It was on their first date that Dawn asked Joe what his favourite dinosaur was.”

Lisa Hogg, visitor services supervisor, who helped Joe set the scene, said “Our museum is important to so many people for a variety of reasons, and it was an honour to share in Joe and Dawn’s special day.

“We wish the whole family much happiness in the future.”

It is not the first time that RAMM has been chosen as the backdrop for a romantic proposal.

In 2016, Simon Connett surprised his girlfriend Katie Jones with a handmade copper rose among the historical artefacts in the Making History gallery.

A marriage proposal at the museum in 2019 included the bride-to-be finding an engagement ring tucked between a tray of moths and a medieval stone carving in the central courtyard displays.

Queen’s Drive in Exmouth to get spruce-up, new benches and lights with EU cash