Friday, May 27
Trending
You are at:Home»News»Covid-19»New figures show Covid-19 cases are on the rise in East Devon and Exeter

Covid-19 cases recorded in East Devon have increased by a third in week, with an additional 325 infections confirmed.

Official figures for the week to Thursday, January 20 show the rate in the Devon County Council area went up by just over 20 per cent, with slightly smaller increases in Torbay and Plymouth.

East Devon recorded 1,285 cases of coronavirus in the last seven days, up to January 20, an increase of 325 on the previous week. 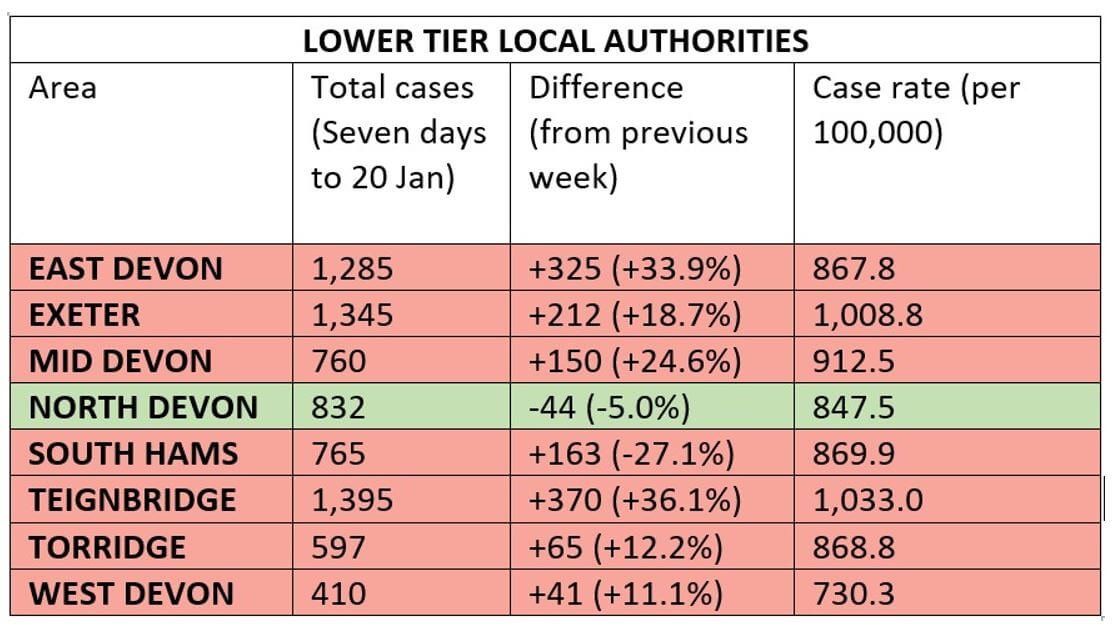 The latest figures released for the week to Thursday, January 20 show the rate in the Devon County Council area went up by just over 20 per cent, with slightly smaller increases in Torbay and Plymouth, writes Ollie Heptinstall.

It comes as national rates have also stopped falling after weeks of considerable reductions.

At a district level, all areas apart from North Devon recorded higher numbers of infections in the latest figures.

Teignbridge and East Devon recorded the biggest increases, both going up by around a third, while Covid in South Hams and Mid Devon increased by a quarter.

West Devon now has the lowest infection rate in the county at 730, followed by North Devon (848) and East Devon (868). Teignbridge now has the highest district rate for the virus (1,033).

Fuelling much of the rise in cases appears to be young people aged up to 19. The rate has increased sharply in the Devon County Council area, from 1,035 cases per 100,000 on January 13, to 1,700 six days later, with similar jumps in Torbay and Plymouth.

It follows a warning earlier this month by Devon County Council’s director of public health Steve Brown, as cases began to fall.

He said there could still be an uptick in cases from students returning to schools and colleges after Christmas.

As of the most recent data from Tuesday, January 18, some 221 patients with Covid-19 were in Devon’s hospital, a similar number to a week ago. Like last week, more than half (130) were being treated in Plymouth.

Elsewhere, 41 were in the Royal Devon and Exeter Hospital, 35 in hospital in Torbay, 13 in North Devon and two at Devon Partnership mental health trust sites. Of the total number of patients, two are on ventilation beds, a reduction of five on last week.

Last week, the boss of the NHS in Devon, Dr Paul Johnson, said Covid-19 admissions were expected to peak around the end of January.

Some 15 people died in the county within 28 days of testing positive for coronavirus in the latest complete weekly period (up to Thursday, January 20). Nine were in the Devon County Council area, five in Torbay and one in Plymouth.

A total of 1,515 people in Devon (including Plymouth and Torbay) have died within 28 days of a positive test since the pandemic began.

The number of people aged over 12 who have received their booster (third) Covid-19 vaccination has been recorded at 70 per cent in the Devon County Council area, 65 per cent in Torbay and 58 per cent in Plymouth.

Take-up for at least one dose of a vaccine is 88 per cent in the Devon County Council area, 86 per cent in Torbay and 85 per cent in Plymouth.