A temporary one-way layout on Queen Street in Exeter to encourage social distancing amid Covid-19 is to be made permanent at a cost of £250,000

The ‘pop-up’ layout, which has split public opinion, was implemented early last year to help with social distancing and to encourage walking and cycling.

Exeter City Council has agreed to spend £250,000 constructing a layout similar to the current single-traffic track design, with additions of a widened pavement and two cycle lanes.

Will Pratt, the council’s lead for transport, strategy and infrastructure delivery, said traffic volumes had reduced by 25 per cent on Queen Street and 35 per cent on the Iron Bridge since the changes were introduced, while the number of people cycling had increased.

He said: “It’s a small intervention with a big change, that helps to significantly improve the environment for the most important users in that part of the city centre.”

When the measures were introduced, Devon County Council described them as ‘temporary’ but a four-week consultation on whether to keep them subsequently took place last year, following a recommendation from the Exeter highways and traffic orders committee (HATOC).

Of around 600 public responses received, they were broadly spilt 50-50, though improving the area for pedestrians was mostly welcomed and the majority of local organisations were in favour.

Councillor Percy Prowse (Conservative, Duryard and Pennsylvania) said residents’ views should not be ignored in favour of businesses and stakeholders.

He said “As important as their views may be, I do like myself to pay attention to what the voters have actually told us.”

As part of the plan, approved by HATOC – made up of county and city councillors – the southern pavement opposite the Royal Albert Memorial Museum will be widened and two cycle lanes will be added either side of a single lane for motor vehicles.

Like the current temporary setup, the road will remain one-way eastbound between Paul Street and Northernhay Street. The Iron Bridge will also become permanently one-way westbound from Paul Street to south of Dinham Road. 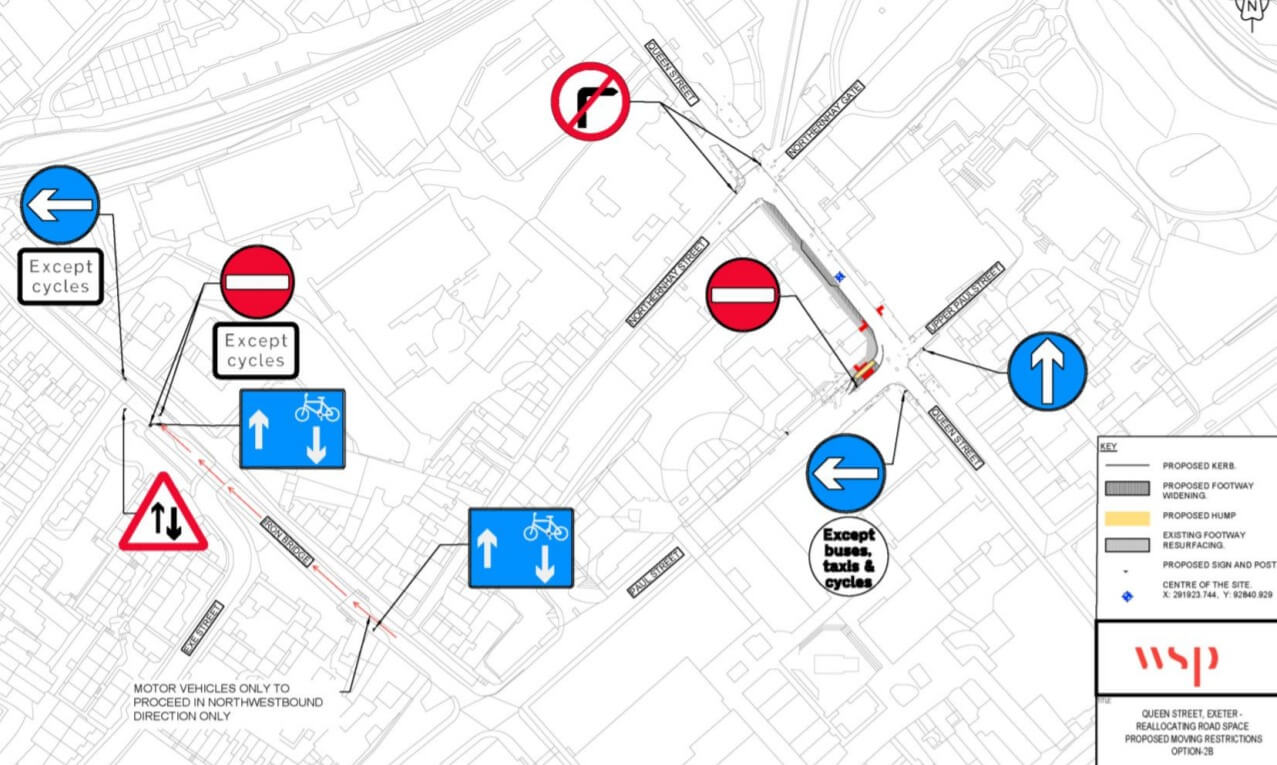 Exeter City Council was previously told there had been complaints about vehicles having to drive further to navigate round the one-way system, while views were mixed on whether the Iron Bridge should be reopened fully or pedestrianised.

St David’s Primary School was against the changes. And a public consultation found the majority of properties on Queen Street, Dinham Road and St David’s Hill wanted the temporary measures scrapped altogether.

Local ward member Councillor Carol Whitton (Labour, St David’s) said that although the local communities in Dinham Road and St David’s Hill were more against the scheme than the rest of the city, she was in favour.

Cllr Whitton said: “Queen Street is very much part of our city centre. It has a role for the wider community. And for that reason, I do urge members to take into account the stronger response from the wider community in favour of addressing these issues in Queen Street and as a result on the Iron Bridge as well.”

Cllr Whitton added the positive response of stakeholders ‘really does push us towards the balanced view of saying the majority of our community – when we look at the bigger picture – is supporting that we proceed with this’.

Councillor Peter Holland (Conservative, St Loyes) questioned what impact it would have on car traffic in the city, given that it would cause congestion elsewhere, and described the plan as ‘like a bubble under wallpaper’.

He said: “We will solve Queen Street perhaps if this is adopted today, but those cars aren’t going to go anywhere else other than in the nearby roads. And in doing so they will reduce the air quality and until 2030 – when we have legions of electric cars – that will go on.”

Councillor Rob Hannaford (Labour, St Thomas) said he supported the layout becoming permanent, ‘predominantly for the safety of all the college students’.

He said: “We know that all along there, there are Exeter College buildings with hundreds and if not thousands of students. And during their break times, they all pour out onto very narrow pavements, so I particularly welcome the fact that you’re widening that footway.”

Some councillors also expressed concerns about the potential impacts of the changes on people with visual impairments, particularly surrounding the planned no entry bypass for cyclists.

Mr Pratt said there would be a meeting with the Royal National Institute of Blind People (RNIB) to see if any possible modifications could be made.

The committee approved the proposal, with two members voting against.