Friday, January 28
Trending
You are at:Home»News»East Devon»Covid cases in East Devon almost double as virus rises sharply across the county

The latest coronavirus statistics show the virus has risen across East Devon, as the county begins to replicate the rest of the UK’s rising levels of Covid-19.

In East Devon, Covid cases have almost doubled in the last week, up more than 44 per cent.

The infection rate recorded in East Devon during the same timescale was 912 people per 100,000. 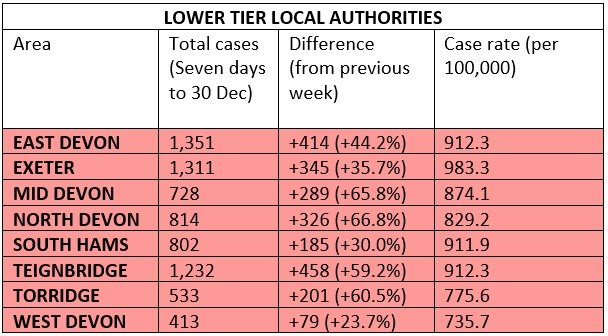 In tables released on Tuesday, January, 4, results show the week to Thursday, December 30, 2021, Torbay’s rate rose by more than 50 per cent, with increases of just under half in Plymouth and the Devon County Council area.

It marks a change from the first half of December when Covid rates were falling in Devon and the Omicron variant was not yet believed to have spread substantially.

At district level, Mid Devon and North Devon recorded the largest increases – just over 65 per cent. Cases in Teignbridge and Torridge both went up by 60 per cent in the last week of December.

West Devon, which recorded the smallest increase of 24 per cent, now has the lowest covid rate of the county’s council areas at 738, with Exeter’s rate of 983 being the most prevalent part of the county council area.

As of the most recent data from Tuesday 28 December, 123 patients with covid were in Devon’s hospitals, a reduction of eight from a fortnight ago. Seventy-one people are at Derriford Hospital in Plymouth, 24 at the Royal Devon and Exeter Hospital, 17 in Torbay and 11 in North Devon.

Of the total number of patients, 15 are in ventilation beds.

Twenty-three more people died in the county within 28 days of testing positive for covid in the latest complete weekly period (up to Thursday, December 30). Fifteen were in the Devon County Council area, five in Torbay and three in Plymouth.

A total of 1,459 people in Devon (including Plymouth and Torbay) have died within 28 days of a positive test since the pandemic began.

The proportion of people aged 12 or over who have received their booster (third) Covid vaccination is 66 per cent in the Devon County Council area, 61 per cent in Torbay and 52 per cent in Plymouth.

Take-up for at least one dose of a vaccine is 88 per cent in the Devon County Council area, 86 per cent in Torbay and 84 per cent in Plymouth.

Where can I recycle my Christmas rubbish, tree, wrapping paper and cards in East Devon?