Friday, August 19
Trending
You are at:Home»News»Exmouth»‘It’s a great honour’ – Exmouth woman receives Queen’s award for political and community service in the town

The Queen has recognised the efforts of a woman from Exmouth who 30 years ago founded a community transport lifeline to help combat loneliness.

Jill Elson, who set up the Exmouth and District Community Transport Group in November 1990, last month received the royal recognition when she was presented with an MBE by the Lord Lieutenant of Devon, David Fursdon – thanking her on behalf of the Queen for her political and community service in the town.

Jill, who received the award at a specially-organised ceremony held at the Lympstone Commando Training Centre after the pandemic halted a 2020 planned presentation, said it was a privilege to work for the community.

She said: “I feel it was a great honour for working in the community to try and make a difference to many peoples’ lives.” 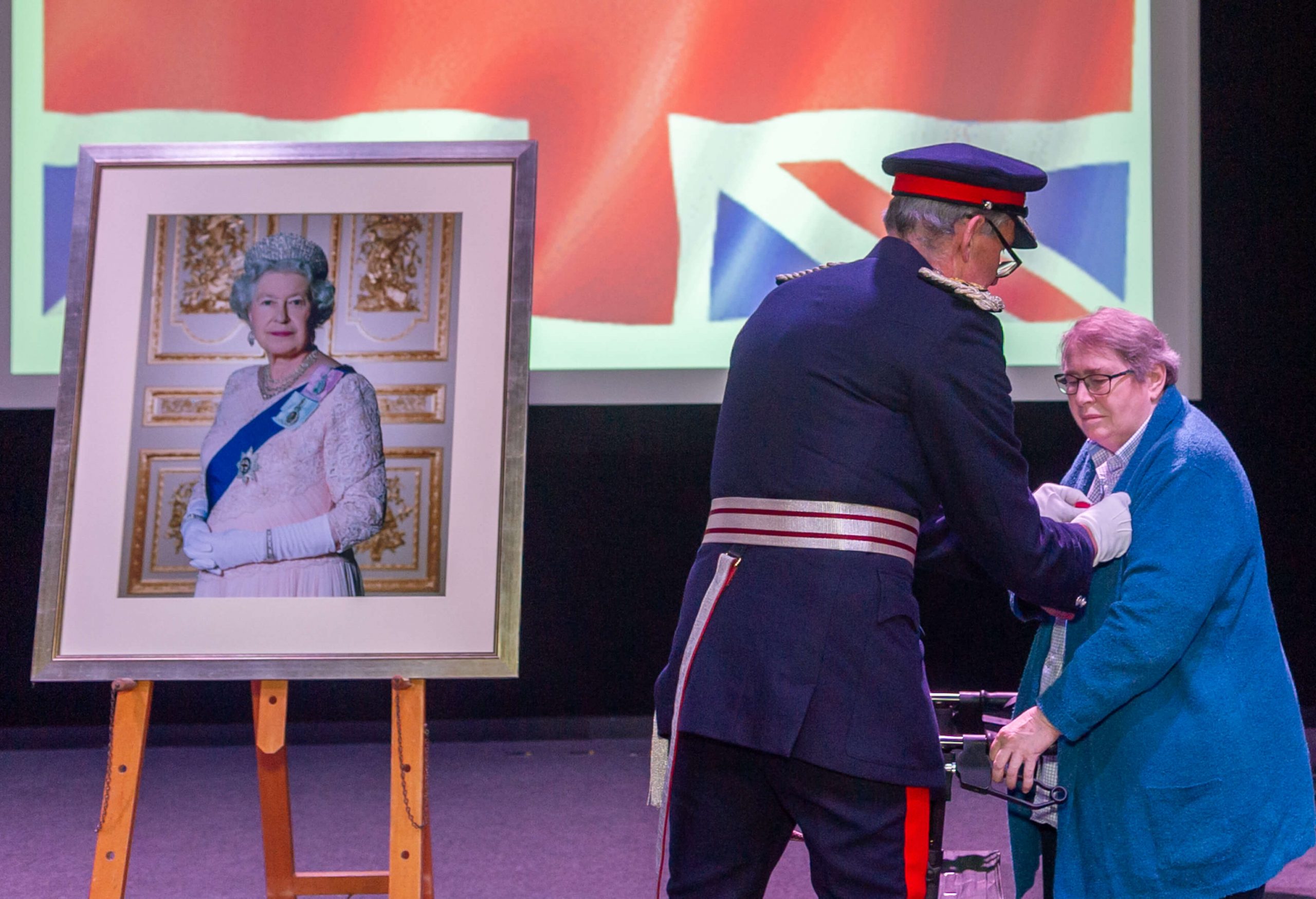 Jill Elson received the award at a specially-organised ceremony held at the Lympstone Commando Training Centre, after the pandemic halted a 2020 planned presentation.
Photo: with permission.

When in 2019 it was announced Jill had been made a Member of the Order of the British Empire (MBE) in the Queen’s New Year’s Honours, she said it was ‘a real surprise’ and had no idea who nominated her.

At that time, Jill celebrated the news by going out for lunch with her sister Lynne.

Jill said: “I founded the Exmouth and District Community Transport Group in November 1990. It was in partnership with Devon County Council to provide transport for those unable to use public transport – either because they have a health problem or there is no public transport service.”

She added: “We need to raise over £100,000 per annum to make sure the fares are affordable, pay our staff, and maintain the vehicles.

“We do have to have special fundraising to replace the vehicles before the end of their life.” 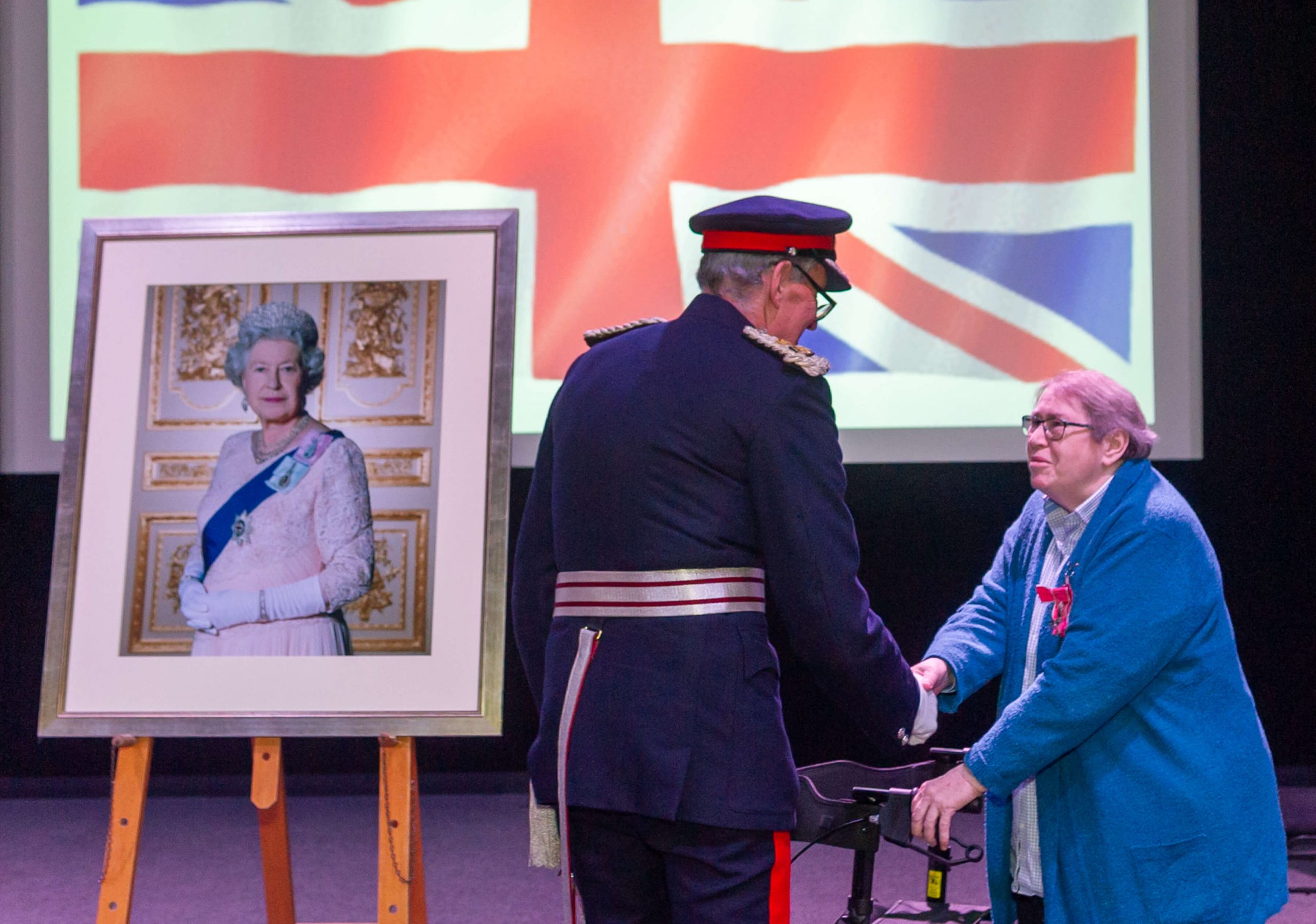 When Jill was named an MBE in the 2019 Queen’s New Year’s Honours, she celebrated by going out for lunch with her sister, Lynne.
Photo: with permission.

The pre-booked ‘ring and ride’ service, using wheelchair-accessible vehicles, picks people up from their homes in Exmouth, Budleigh Salterton, and the surrounding villages, and offers affordable transport in a host of different ways.

“It is a pre-booked service using wheelchair accessible vehicles that pick people up at their front door and return them there, with help from the driver,” said Jill.  “We provide transport on a timetable for shopping in addition we provide transport to medical appointments, lunch trips, flower festivals, garden centres, charging a return fare.

“It is to ensure people can be as independent as possible to do their own shopping, etc.

“During the pandemic we collected prescriptions and shopping from their lists.

“We have three vehicles; two eight-seater minibuses with passenger lifts and one single wheelchair-accessible vehicle.”

Jill, who served as a district councillor representing the Exmouth Halsdon ward for 36 years, was first elected to East Devon District Council in 1979 and lost her seat in May 2019.

She said her work with housing – helping vulnerable people – and the community transport scheme were her proudest achievements.