A government watchdog investigating what caused a crash between a Honiton-bound train and another passenger service near Salisbury has released its initial findings.

The Rail Accident Investigation Branch (RAIB) has completed a preliminary examination after emergency services were called to the major incident at around 6.45pm on Sunday, October 31.

It says ‘wheel slide’ led to a braking London Waterloo to East Devon service passing a red danger signal and colliding with the side of a Portsmouth to Bristol train at a junction.

This was ‘almost certainly’ the result of ‘low-adhesion’ between the first, slowing train’s wheels and the track, according to the RAIB. 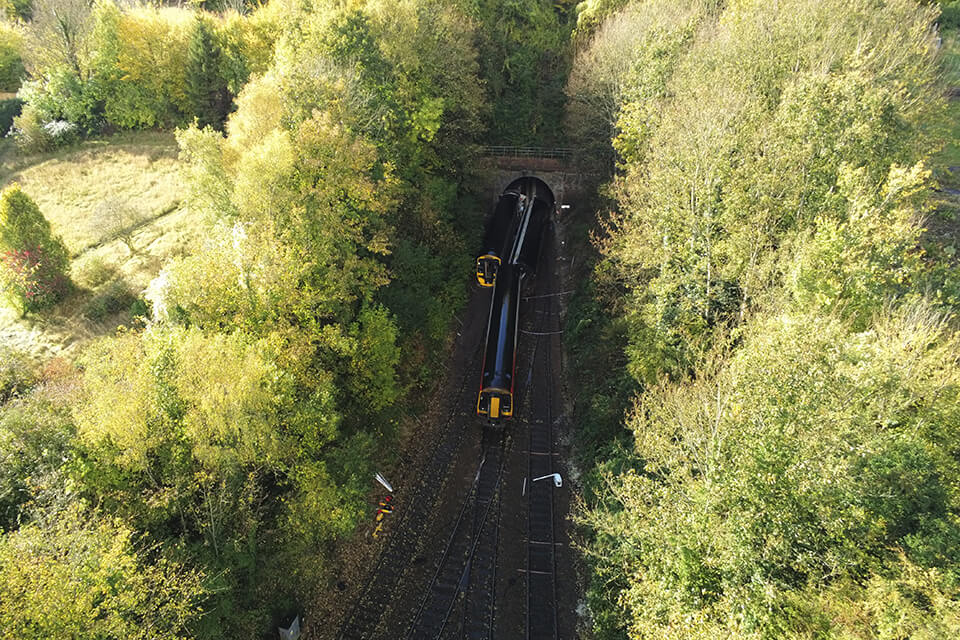 An aerial view of the accident site near Salisbury. The October 31 crash involved a Honiton-bound service. Image: RAIB

The crash happened at Salisbury Tunnel Junction – on the immediate approach to Fisherton Tunnel.

“Both trains continued some distance into Fisherton tunnel following the collision, before they came to a stop.

“Thirteen passengers and one member of railway staff required treatment in hospital as a result of the accident, which also caused significant damage to the trains and railway infrastructure involved.

“RAIB’s preliminary examination has found that the movement of train 1F30 [Portsmouth Harbour to Bristol Temple Meads] across the junction was being protected from trains approaching on the Down Main line by signal SY31, which was at danger (displaying a red aspect).

“Train 1L53 [London Waterloo to Honiton] passed this signal, while it was at danger, by around 220 metres, immediately prior to the collision occurring.

“Preliminary analysis of data downloaded from the On Train Data Recorder (OTDR) fitted to train 1L53 shows that the driver initially applied service braking to slow the train on approach to the caution signal before signal SY31.

“Around 12 seconds after service braking started, the driver made an emergency brake demand.

“These emergency brake demands did not prevent the train from reaching the junction, where the collision occurred.

“OTDR analysis indicates that wheel slide was present both when the driver applied service braking and after emergency braking was demanded.

“This was almost certainly a result of low adhesion between the train’s wheels and the rails.” 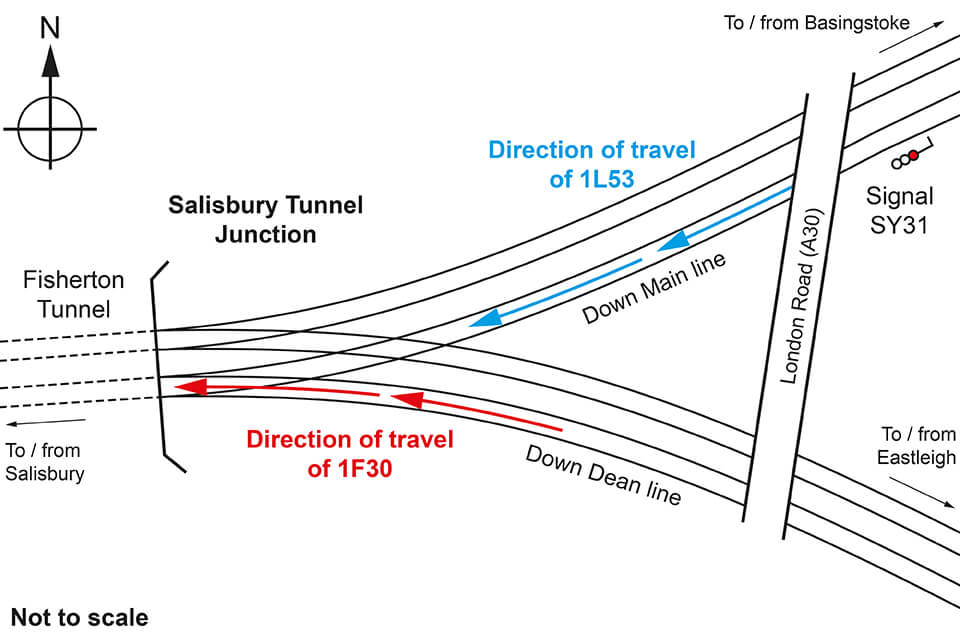 Initial findings indicate that the driver acted in an impeccable way in a valiant attempt to keep his passengers safe, staying at the controls throughout – South Western Railway

A South Western Railway spokesperson said: “RAIB’s statement on their initial investigation into the train collision near Salisbury on Sunday points to low adhesion between the wheels and the track as the most likely cause.

“Their early assessment shows the South Western Railway driver reacted correctly to the signals by braking to slow the train down.

“While the investigation has a long way to run, these initial findings are helpful to stop speculation and focus attention on the evidence about the likely cause of the collision.

“Our thoughts are with all those caught up in this serious accident and we will continue to cooperate fully with the relevant authorities as they continue their investigations.

“We want to pay tribute to our driver who was injured on Sunday night.

“He is a deeply-respected colleague, who has over 50 years’ experience of driving on this route and an excellent professional track record.

“All our drivers are regularly assessed to the highest standards and he has fully satisfied all requirements.

“Initial findings indicate that the driver acted in an impeccable way in a valiant attempt to keep his passengers safe, staying at the controls throughout.

“We thank him for his actions and we wish him a speedy recovery as he continues to be treated in hospital.”

The RAIB spokesperson added that the investigation will now ‘seek to identify the sequence of events which led to the accident’.

It will also consider:

The investigation is independent of any probe by the railway industry.

Findings, including any recommendations to improve safety, will be published on the RAIB’s website once the process has concluded.