Friday, May 27
Trending
You are at:Home»News»Exeter»Eco-friendly ‘parkland village’ of up to 150 homes proposed for Stoke Hill in Exeter

A ‘green and leafy’ eco-friendly housing development with up to 150 dwellings has been proposed for Stoke Hill in Exeter.

It would also feature a farm shop/café, orchards and renewable energy production.

Developer McMurdo Land Planning and Development Ltd says almost half of the 25-acre plot will be set aside for open space as part of an ‘intention to create a new ‘feathered’ edge to Exeter’.

A variety of properties are proposed ‘to meet local needs with appropriate proportions of each housing type and tenure’.

They would be two storeys high; with some single-storey structures such as outbuildings and garages.

The final mix and ‘affordable’ allocation would be agreed at a later stage.

New pedestrian and cycle routes to Exeter are proposed through Mincinglake Valley Park, as well as to Mile Lane to the east. 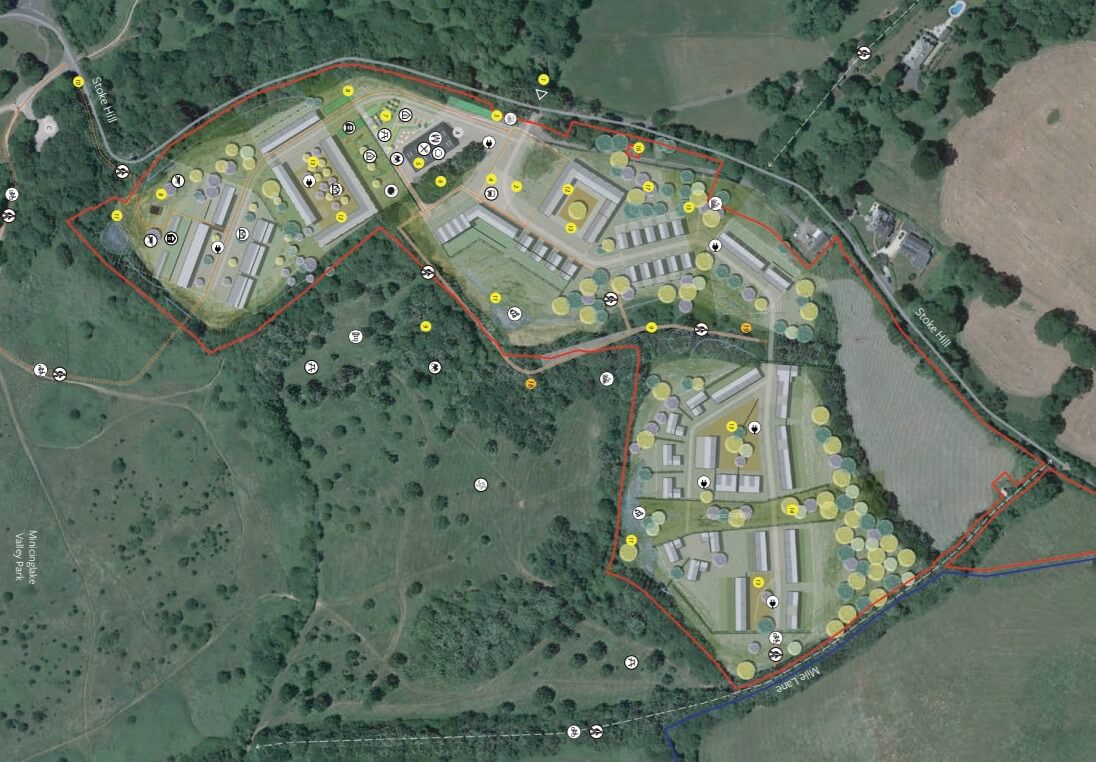 Blueprints for the mooted development at Stoke Hill, Exeter, from the planning application.

The plans state: “Emphasis has been on achieving an accessible, low-traffic, low-speed, walkable, and cyclable, urban village neighbourhood.

“This forward-thinking proposal represents the epitome of sustainable development, promoting a unique culture change towards green technologies and infrastructure, eco-friendly modes of transport and a focus on community living.

“The vision looks to disrupt conventional housing delivery through innovative and sustainable building and development that recognises the importance in the preservation of our planet and generating wealth for all (carbon-zero).”

The application has already garnered several objections from the public.

One resident said: “There are brownfield sites available closer to the city centre without covering another greenfield site with development.

“This site is adjacent to a valued nature reserve which is used by many residents for recreation purposes.

“It would spoil the views currently enhancing this part of Exeter and surely impinge upon the outline of the city by creating a visible sight of development on the north ridge.”

Another objector said: “We have sufficient brownfield sites in Exeter to avoid destroying our greenfield areas and the environmental impact that that entails.

“There is also insufficient road infrastructure on Stoke Hill for increased traffic, and no public transport provision to that area so people would have to use cars.

“The local school is already over-subscribed so there is no room for further families/children. Please reject this application.”

One person supporter added: “I completely disagree with building homes in the city centre when there is land available for building elsewhere.

“In years to come, there will be no city centre to visit to shop. All the shops will have gone bankrupt.”

Exeter City councillors last month rejected controversial plans for up to 93 new homes on another greenfield site near Beacon Heath because of concerns over their impact on the landscape.

Speaking at the planning committee meeting, the authority’s leader Phil Bialyk said: “I am totally committed to saving the hills around Exeter, as I have said. They are so important to us. It is an important amenity space. We have to protect it for the residents of Exeter.”

The fate of the Parkland Valley Village application will be decided by the council at a later date.