Sections of Exmouth beach will be closed-off in November as the RNLI proceeds with long-awaited improvements to its launching ramp.

The charity is to build a ten-metre extension to the ramp from the lifeboat station to improve access to the sea, writes Local Democracy Reporter Joe Ives.

Although it’s only around 12 years old, the current ramp no longer reaches the sand because of erosion, meaning there’s a drop at the end.

This wasn’t originally part of our beach work, but it’s something we don’t really want to leave…

Shortly after opening, the ramp had to close again because of problems with its construction. 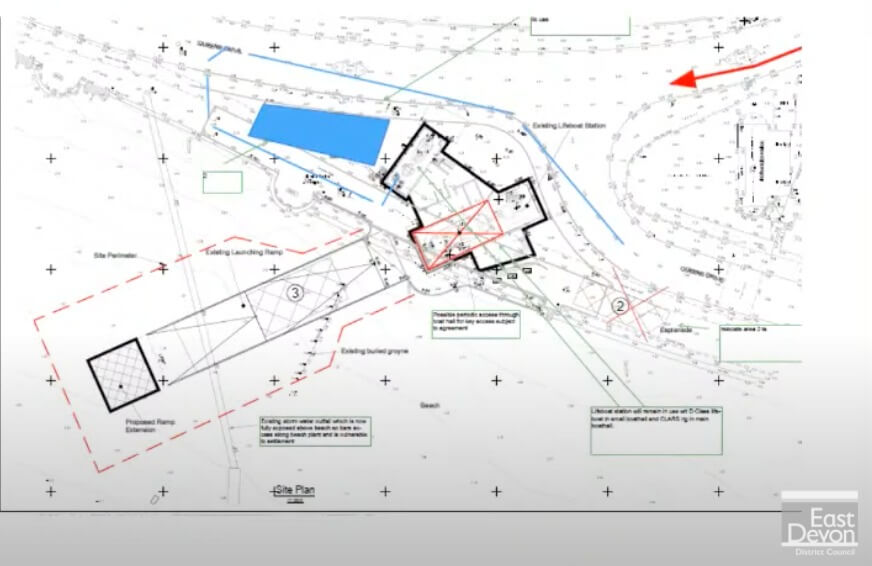 Plans for the RNLI ramp extension at Exmouth beach. The public won’t be able to access the areas marked by red lines. The black box highlights where the new ramp will reach to. Image: East Devon District Council 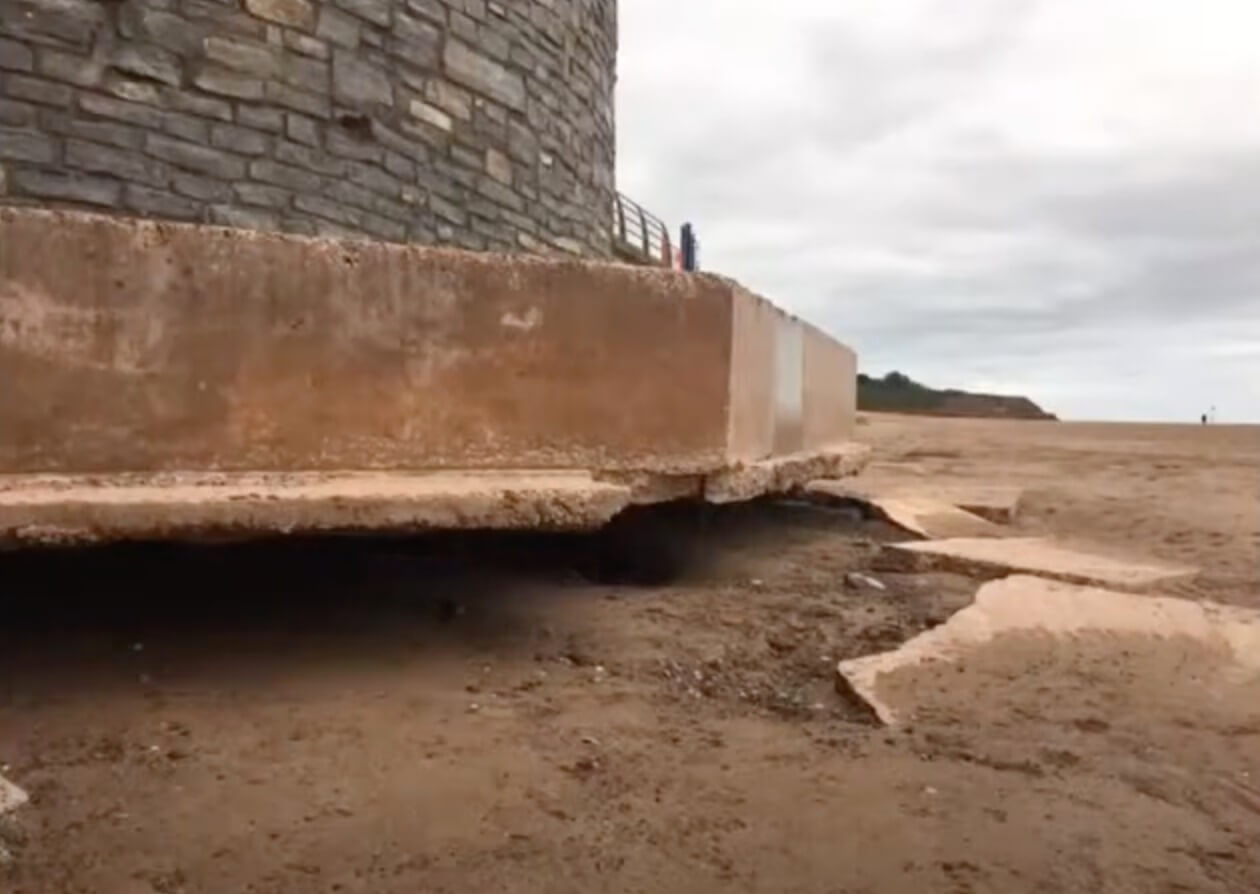 Concrete has broken away from the sea wall at Exmouth beach. Image: East Devon District Council

Once that issue was fixed, the RNLI housed both an inshore lifeboat and the larger ‘D-class’ vessel.

Half of the ramp’s new extension will be buried in the beach to ensure against further erosion and sand loss.

It should make it easier and safer to get the lifeboats in and out of the water, whatever the conditions.

The construction work will effectively close sections of the beach around the lifeboat station for the majority of the tide.

Planning permission for the ramp extension was granted by East Devon District Council (EDDC) in late 2018.

The lifesaving charity will also repair a piece of the sea wall that recently snapped off – addressing concern the damaged concrete could be a danger if thrown around in the sea in a storm. 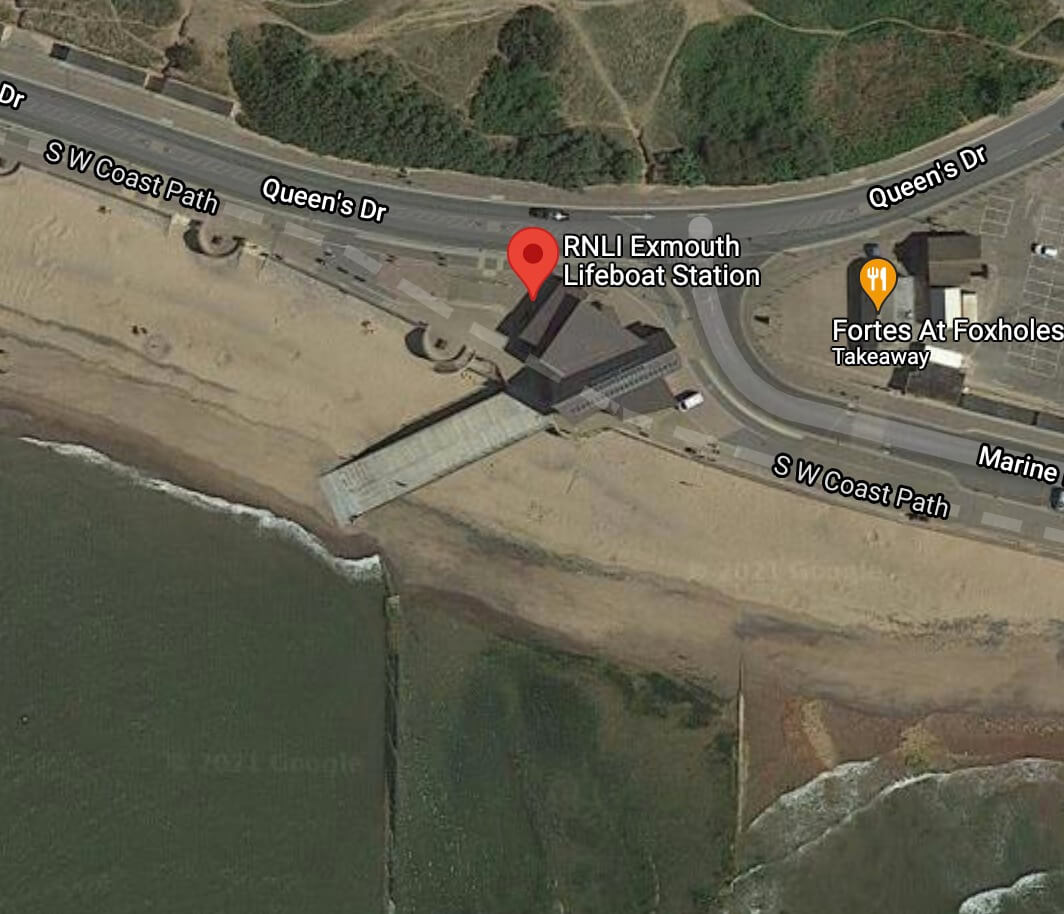 A birds-eye view of Exmouth Lifeboat Station where erosion has meant the ramp no longer reaches the sea. Image: Google Maps

Broken pieces will be removed and the damage repaired, adding extra depth to the concrete defence so that water doesn’t scour the structure beneath the promenade.

Speaking at a meeting of EDDC’s Exmouth Beach Management Plan Steering Group, Max Underhill, an estate engineer for the RNLI, said: “This wasn’t originally part of our beach work, but it’s something we don’t really want to leave.”

An officer report written around the time planning permission was granted states the ramp extension works could take three to six months to complete.