First-time London Marathon runners Tanya Robinson, from Exmouth, and Kelly Lawson, from Exeter, each completed the 26.2 miles in just over four hours, to raise vital funds for the Devon Freewheelers charity, based in Honiton.

Exmouth resident Tanya, who is married to Devon Blood Bike volunteer Jim, secured a place to run the marathon in London, finishing the race in four hours and 58 minutes.

Mum-of-three Kelly completed the virtual London Marathon in four hours and 44 minutes, forging her own route in Devon, which included beauty spots close to her heart, in memory of her dad. 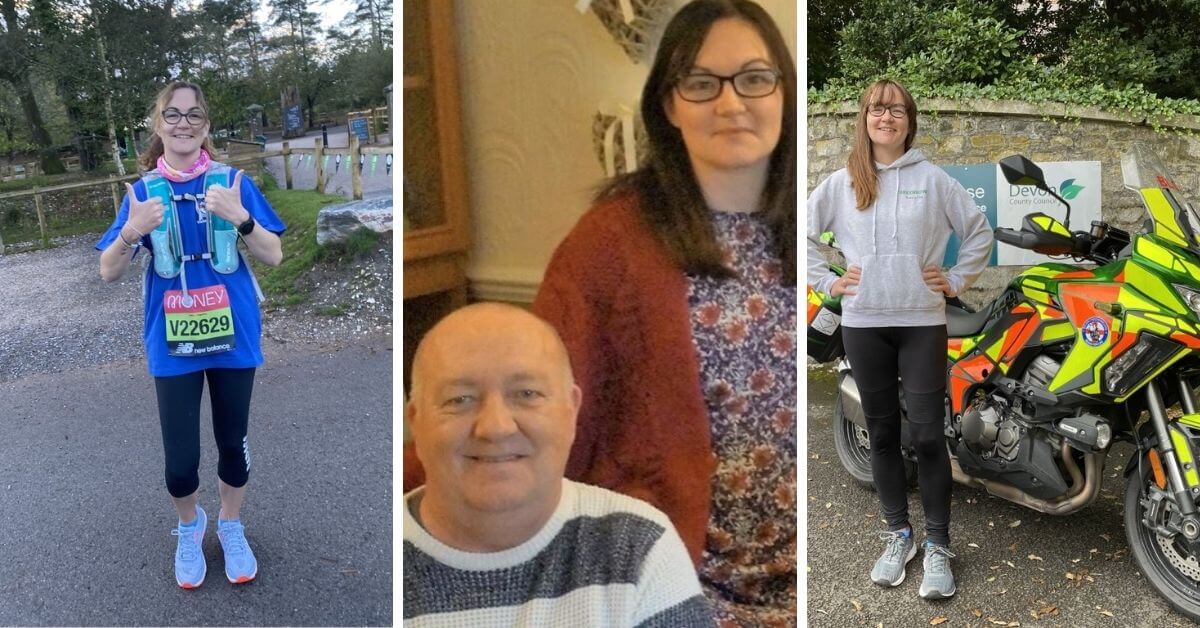 Tanya, aged 41, of Bradham Lane, Exmouth, was cheered along the route by her Blood Biker husband and wept as she crossed the London Marathon finish line. 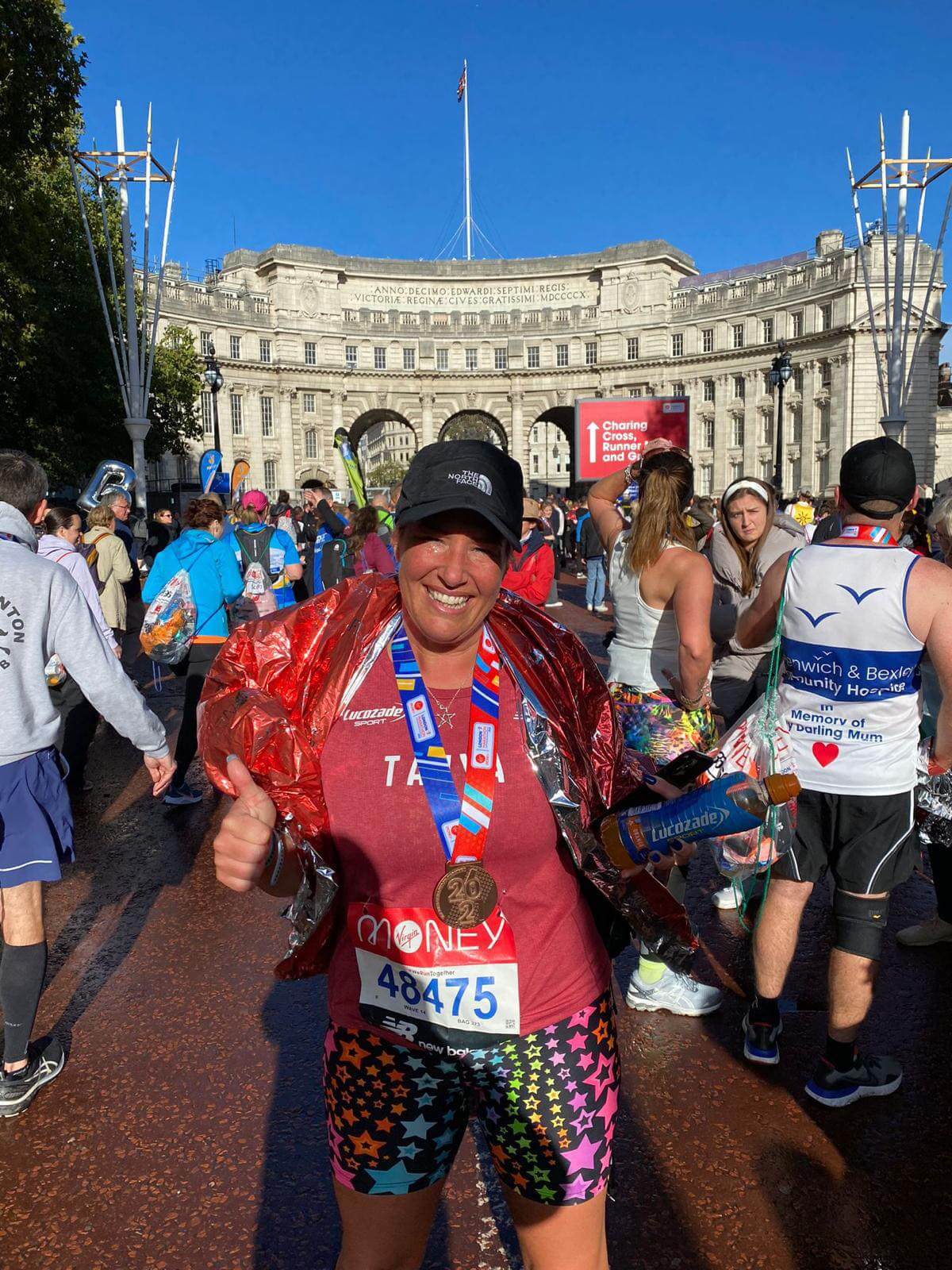 Tanya Robinson is pictured here after finishing the London Marathon in aid of the Devon Freewheelers.
Photo: Tanya Robinson 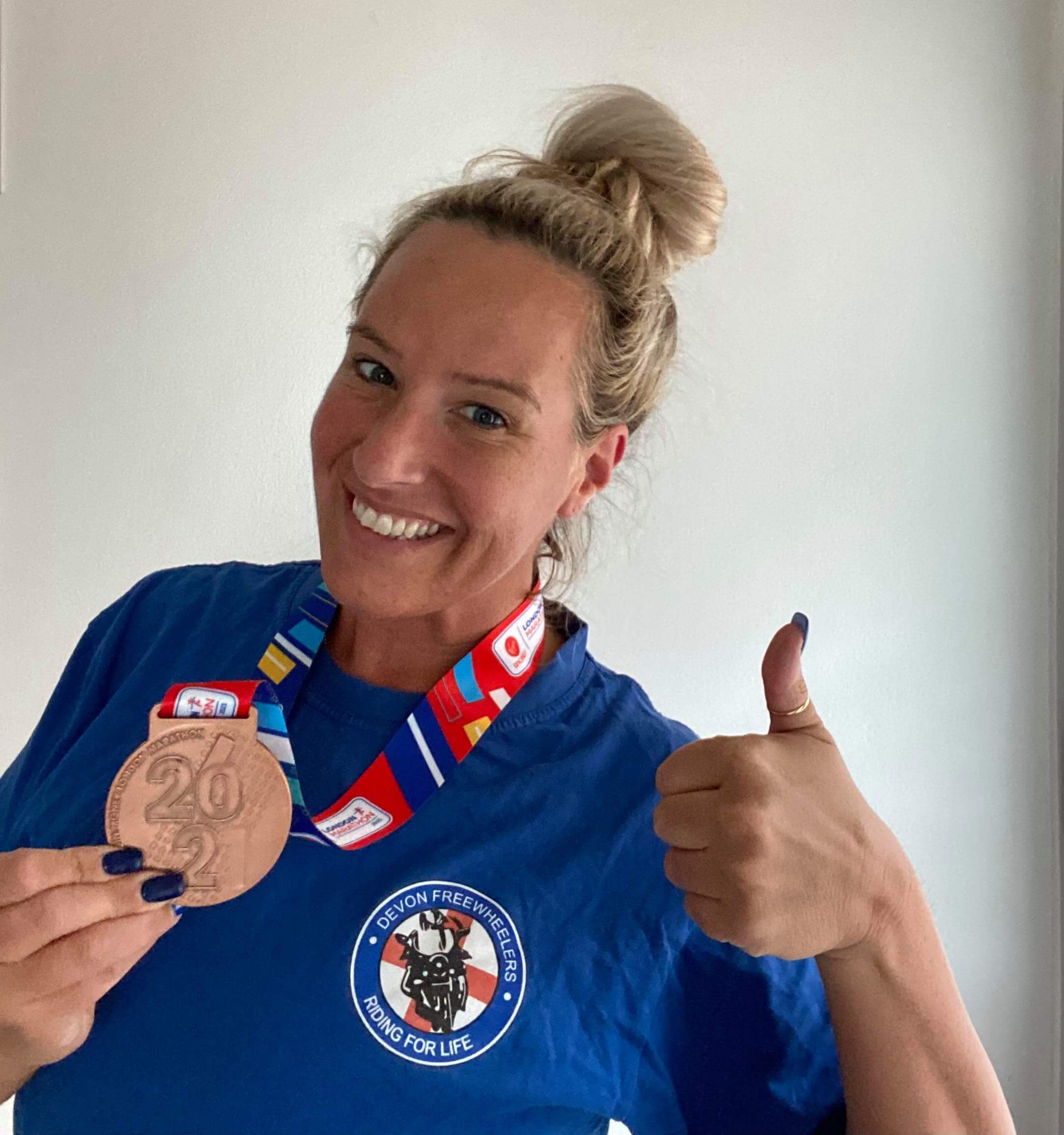 The mum-of-one said: “That atmosphere was immense. It was insane. Everyone taking part knew they were part of something really special this year because of Covid.

“Everyone understood they were running for charity and it meant something because everybody has been so desperate for money because of the coronavirus.

“I crossed the finish line and I just burst into tears. It was such an overwhelming feeling of emotion.”

Spa manager Tanya said the support of her husband, Jim, and the cheering crowds, carried her when the going got tough.

She said: “The blood bikes never left my mind and that is why I pushed every step.”

Tanya, from Withycombe Raleigh, Exmouth, said: “Jim was there for me at 13 and 24 miles and to catch me at the end.

“He lifted me at 13 miles and when I wanted to break down, he hugged me and shouted ‘let’s get this done’.

“I had a tee-shirt with my name on, people were calling it all the time, saying ‘you’re looking great, you’re still smiling’, it was fantastic. It was a real pick-up; emotional. It carried us through.

“It was amazing. I think it’s something that will stay with me forever.

“I was almost home. My hips were sore and I had blisters between my toes that felt like razor blades.

“I came up through the tunnel at 23 miles. I saw Jim before he saw me. I was absolutely full of emotion. I wanted to give him a big hug. He could see I was right on the brink of tears. He said ‘you have got this’.” 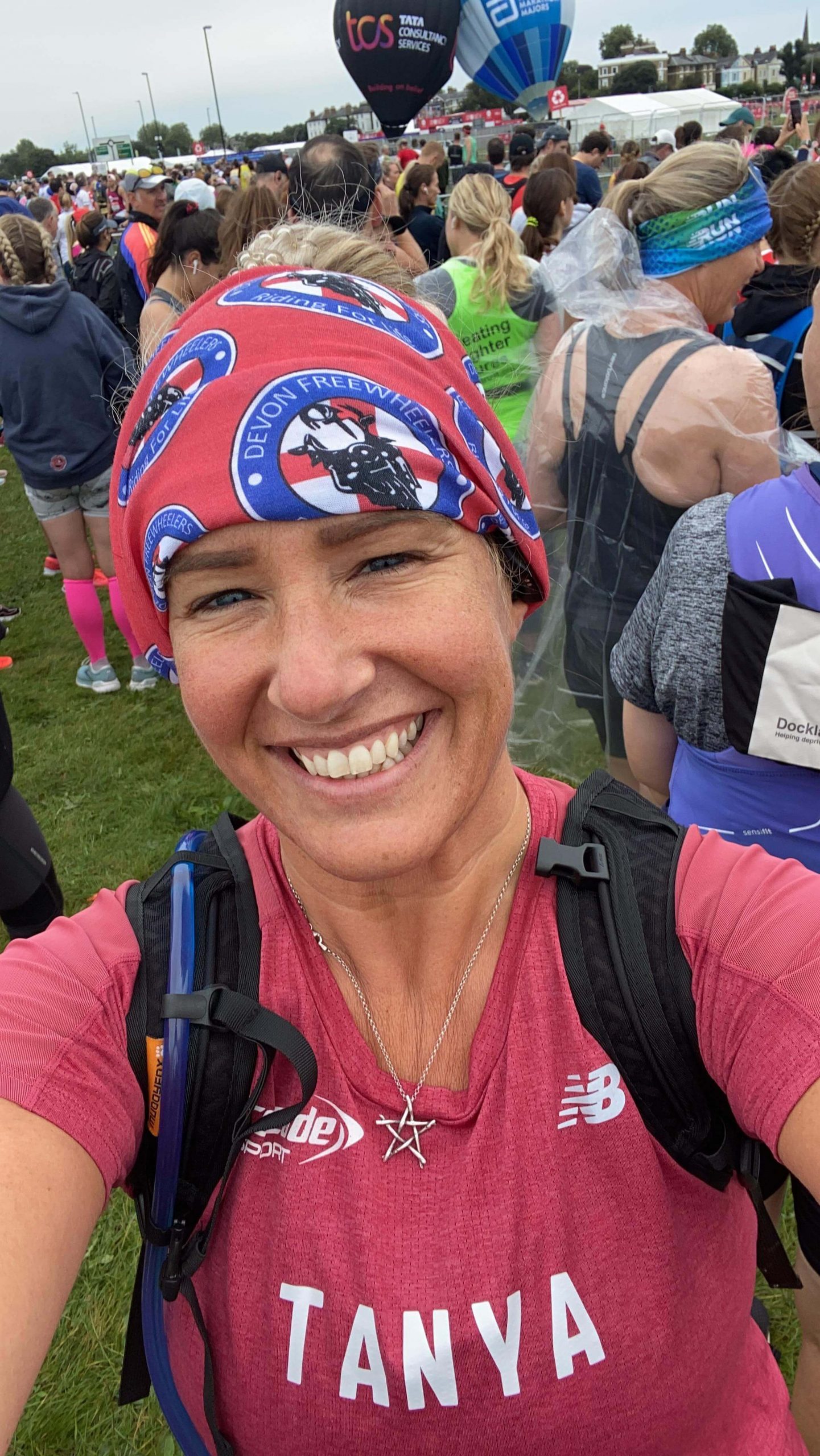 Tanya Robinson’s tee-shirt attracted lots of support and shouts of ‘you can do it’ as she ran the course.
Photo: Tanya Robinson

Accountant Kelly ran her route in Devon, setting off from Haldon Forest and finishing at Cockington Court country park, in Torquay.

Using the official race App, Kelly had three-time London Marathon winner Paula Radcliffe in her ear, spurring her on, alongside cheering crowds. The bells of Big Ben chimed once she crossed the finish line.

Married Kelly, who was cheered on by her family during 26.2miles, thanked the motorists and passers-by who clapped, waved and sounded car horns when they spotted her and other virtual marathon runners near Teigngrace and Newton Abbot.

“Cars were tooting and people were waving to us and clapping when they saw us wearing London Marathon numbers,” said Kelly. “When we finished Big Ben rang out.

“When I got to Newton Abbot the heavens opened. It absolutely threw it down for about two or three miles. I was drenched right through. I was a bit soggy when I got to Torquay seafront.

“When I got to Cockington there was a woman doing the race. I ran past her family who were holding up the London Marathon sign and they all cheered me on when I went past.

“I ended the race at Cockington Court country park because it’s a special place; mum lives nearby, I worked there until I had my first son. I used to go there with dad and walk the dogs. I had my wedding reception there. It was just like going home for me.” 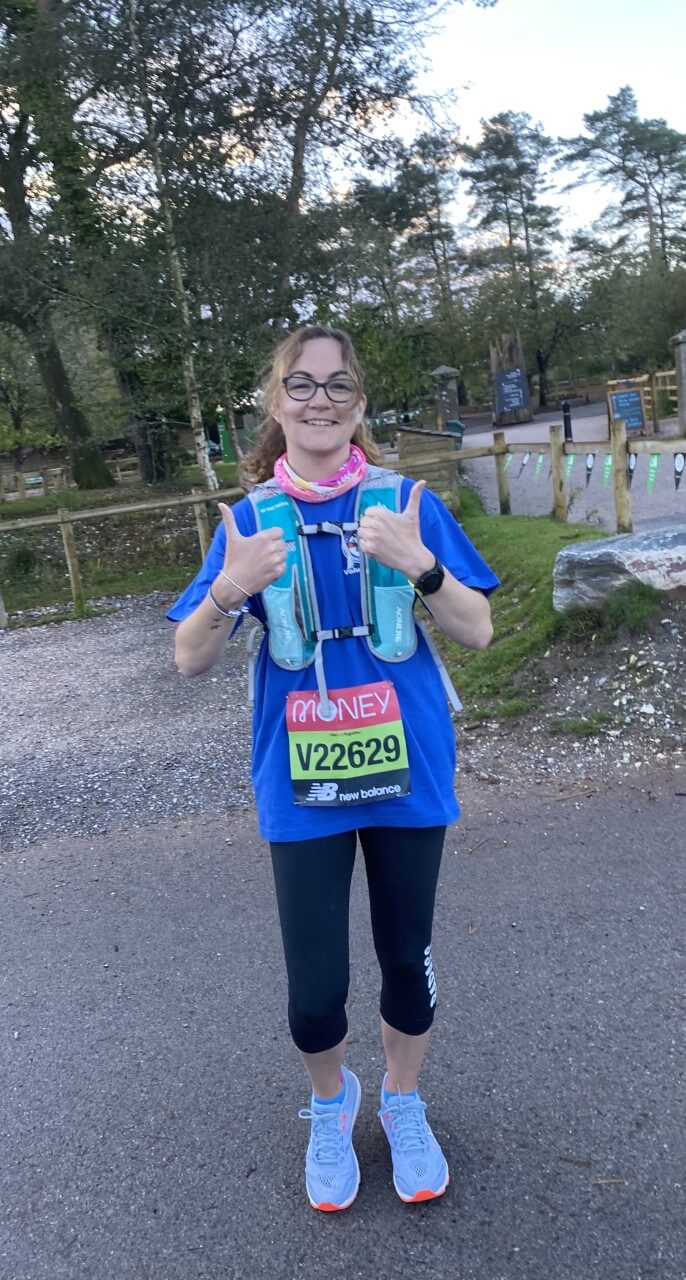 Kelly Lawson is pictured here setting off from Haldon at the start of her virtual London Marathon race in aid of the Devon Freewheelers. Photo: Kelly Lawson.

Earlier this year keen runner Kelly launched Challenge 62 as a tribute to her dad David Meyer, from Chelston, in Torquay, who died from coronavirus in March 2020, aged 62.

She celebrated her ‘petrol head’ dad’s life by swimming 62 lengths, and running and cycling 62 miles for each discipline, raising funds for the Devon Freewheelers charity through a JustGiving page.

Tanya in 2020 launched a year of challenges to mark her 40th birthday, also raising funds for the Devon Freewheelers through a JustGiving page.

When the Covid-19 pandemic cancelled a host of planned challenges, Tanya pledged a further year of punishing monthly tasks, which come to an end in March 2022 to mark her 42nd birthday.

Russell Roe, Devon Freewheelers deputy CEO, based at the charity’s Honiton headquarters on the Heathpark Industrial Estate, said: “Over the last year Kelly and Tanya have repeatedly pushed themselves to the extreme to raise money for the Devon Freewheelers. The charity is indebted to them.

“Their latest challenge, running the London Marathon, had us all in awe.

“The Devon Blood Bikes rely on fundraising to offer a free service, supporting the county’s communities and the NHS.

“We cannot express enough the level of gratitude everyone at the Devon Freewheelers feels towards Kelly and Tanya for all they have done for the charity over the last year, and continue to do.”