Thursday, October 28
Trending
You are at:Home»News»Covid-19»Covid-19 cases rise in East Devon but drop in Exeter in latest weekly stats

Recorded new Covid-19 cases in East Devon have risen by seven per cent in a week, but have dropped in Exeter by 18 per cent.

But there was a decrease of 139 in Exeter where the infection rate is 469.5 – the second highest in Devon.

Both areas are still well above the national average rate of 304 cases per 100,000 residents.

Torbay once again has the highest Covid rate in the county after cases rose by 20 per cent. 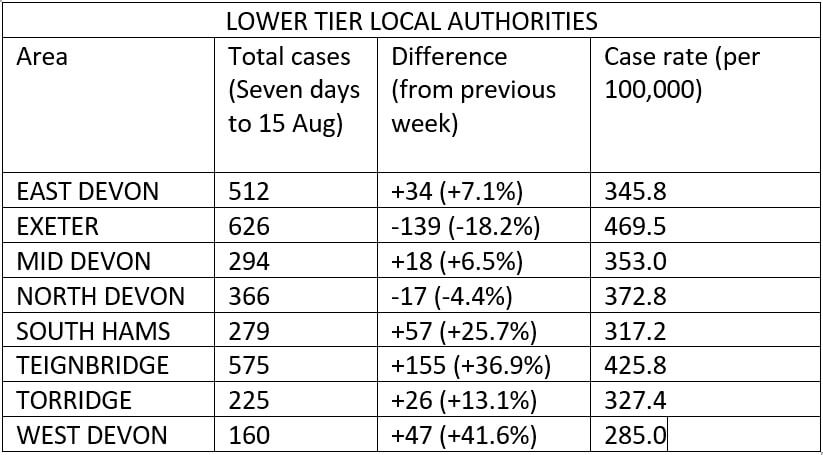 Lower tier local authorities in the week up to August 15.

The biggest weekly rise was in West Devon, which has seen cases rise by more than 41 per cent.

There was also a significant increase in Teignbridge, which now has the third highest infection rate in Devon.

Upper tier local authorities in the week up to August 15.

The number of people in hospital with Covid in Devon has risen.

The latest figures, up to Tuesday, August 17, show 120 patients with the virus in the county’s hospitals – a rise of 31 on the previous week.

Of the 120 patients, 34 are at the Royal Devon and Exeter, 48 are at Derriford Hospital in Plymouth, 24 are in Torbay and 14 are being cared for in North Devon. Eighteen people are on mechanical ventilation beds.

Eight people died in Devon within 28 days of testing positive for Covid-19 in the seven-day period up to and including Sunday, August.15

Six were in the Devon County Council area, one in Plymouth and one in Torbay.

A total of 1,079 people in Devon have died within 28 days of a positive test since the pandemic began.

This includes 216 in Plymouth and 165 in Torbay. Across the UK, 131,487 people have died within four weeks of testing positive.

The number of adults aged 18 or over who have received at least one dose of a Cover vaccine is now 87 per cent in the Devon County Council area, 86 per cent in Torbay, and 84 per cent in Plymouth.