‘You could be crushed or suffocated’ that is the stark warning from Exmouth firefighters warning against digging giant holes after spotting this huge pit recently left on the beach.

The town’s firefighters are urging visitors to Exmouth beach not to dig deep holes, calling them a ‘massive risk’ to the public.

HM Coastguard said the deep pits in the sand were ‘potential death traps’ and could prove ‘lethal’. 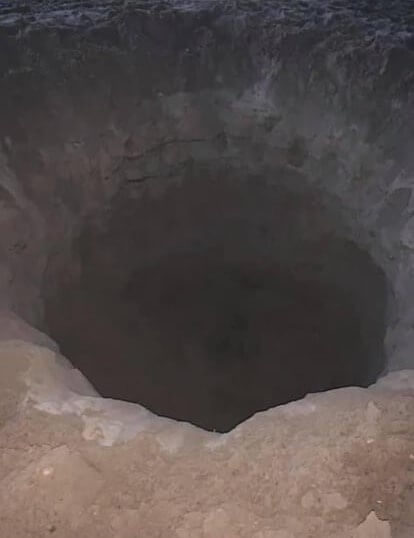 The emergency services said those digging giant holes could be risking their lives if the sand pit collapsed with them inside.

It could take the rescuers hours to dig out a casualty trapped in a sand hole the Coastguard has warned.

An Exmouth Fire Station spokesperson said: “Digging holes might be a classic beach activity for young children, but some of the holes we have seen are so deep they are definitely not dug by kids.

“These holes are a massive risk to both the people digging them and anyone unfortunate enough to accidentally fall down one.

“Sadly, we have been to many incidents in the past involving large holes and trenches which have quickly turned from a casualty rescue to a body recovery job.

“Sand is heavier than you think. You could be crushed, or suffocated. Please don’t dig deep holes.”

The Coastguard said deep sand holes were ‘highly’ unstable and prone to collapse.

Cascading sand from collapsing pits had the potential to quickly trap and suffocate anyone inside, the Coastguard said.

“Sand hole collapses are rare but can be lethal if you become trapped in one. There’s nothing wrong with digging holes at the beach and filling them with water for your kids to play in. But if you dig a hole so deep that your head is barely poking out or burrow into a sand dune then you could be putting your life at risk.

“If it’s taken you three hours to dig your hole – that’s how long it might take someone to dig you out.”

The Coastguard said deeply-dug holes were at risk of collapsing inwards, because of falling sand.

“These deeper types of holes are highly unstable,” said the Coastguard spokesperson. “The wet harder sand that you dig out will dry out in the sun making it loose and the deeper you dig the more danger there is of the hole collapsing inwards and potentially trapping you inside.

“The holes can collapse when people fall into them and a casualty can be trapped by cascading sand, making it impossible to move.

“In severe cases the weight could restrict breathing so badly it could be fatal. Sadly that has happened in recent years here in our beautiful county.”

The Coastguard said the ‘best way’ to rescue someone was to have a circle of people digging with their hands, while another outer circle does the same while also removing the sand from the first circle.

“More circles of people digging will be added as they become available. This will then create a wider shallow hole with no risk of any further collapse of sand,” said the Coastguard spokesperson.

They added: “Never leave your hole unattended and always fill it back in so it isn’t a hazard to others.

“Spend the day wisely on a lifeguarded beach where trained experts are on hand to give safety advice and keep you safe.”