Tuesday, May 11
Trending
You are at:Home»News»Ottery St Mary»Ottery gran, 98, dreams up sitting room cycle challenge for homelessness charity set up by great-grandmother

Diana O’Flynn, from West Hill, this month got stuck into her around-the-sitting-room-in-80-days quest, fundraising for West London Mission (WLM), a charity set up in 1887 by her great-grandmother, Katherine Price Hughes.

From her sitting room, Diana, a retired teacher in prisons, aims to cycle daily for around half an hour each day, finishing her personal challenge at the end of June.

The 98-year-old, who recently broke her elbow, set up a GoFundMe page for donations and has already smashed her goal of £1,000.

Jovie McMillan, Diana’s granddaughter, said the on-the-spot cycling challenge had been dreamed up during the coronavirus lockdown.

She said the generosity of donations spurred her grandmother on to cycle for longer each day.

Jovie said: “Because we’ve raised more than the £1,000 she said she has been cycling more every day just because people have been paying more.

“She’s loving it, she gets excited every time a donation comes in and she calls me to say ‘look, did you see?’.” 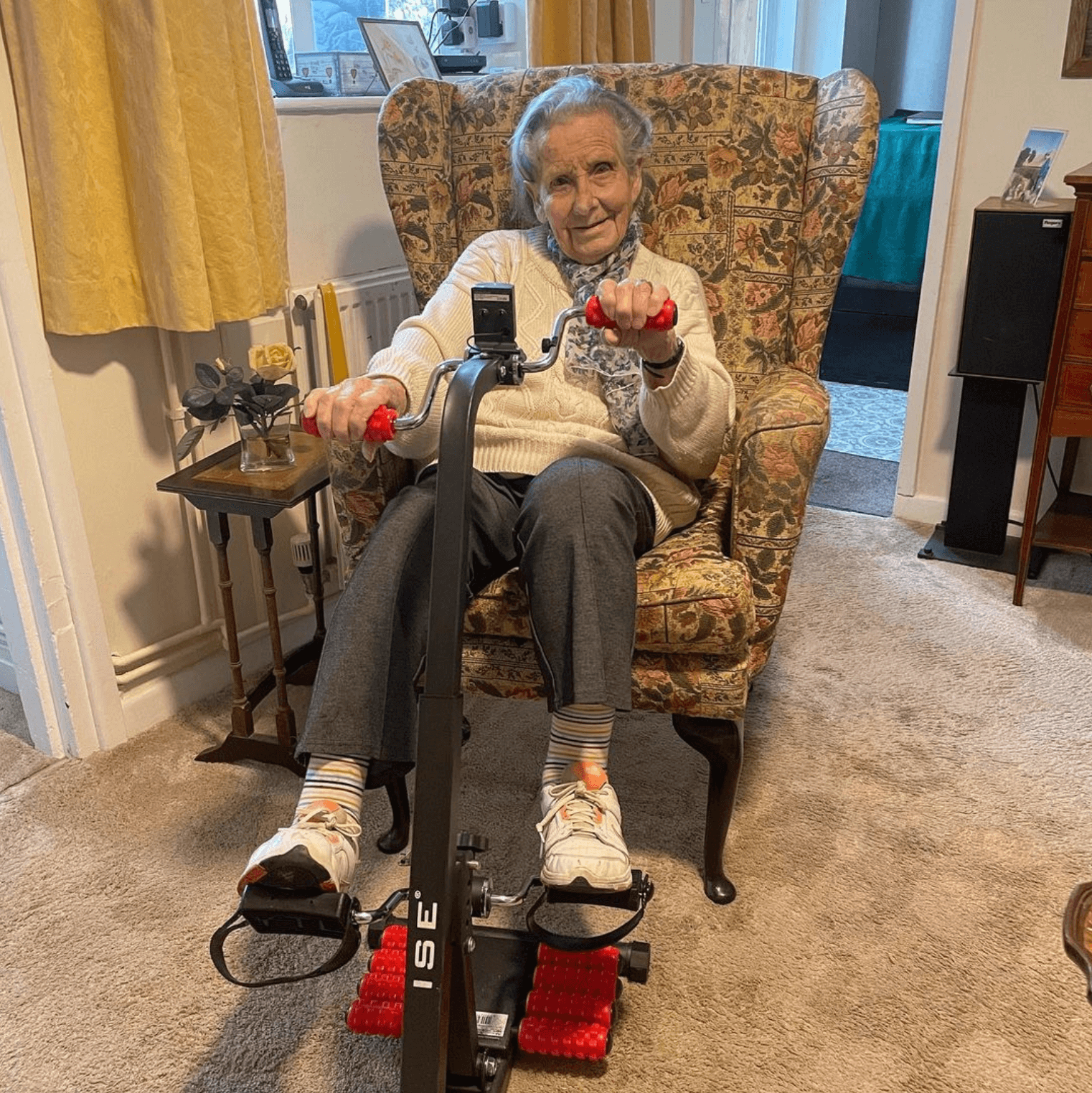 Diana, a retired teacher in prisons, aims to cycle daily for around half an hour each day, finishing her personal challenge at the end of June.

Jovie said her active grandmother, who in the past has skied, flown a glider and cycled around the Pyrenees, called during lockdown to ask for an exercise bike.

“During lockdown, my grandmother asked me to purchase her an exercise bike – not an ordinary request, but this is no ordinary grandmother,” said Jovie.

“She was used to daily walks and adventures and found the change of pace difficult to adjust to. Those who know her will not be surprised by this. She was always off doing something and usually raising money for charity along the way.

“This is a woman who finds it difficult to stay still. She asked me if there was any way of her doing a sponsored bike ride.”

Jovie added: “Doing anything close to this at 98 is a feat all by itself and deserves a few pennies.”

Roger Clark, WLM chief executive, said the charity was ‘so incredibly grateful’ to Diana for her efforts.

He said: “We are very proud of our founders Katherine and Hugh Price Hughes.

“Just like her great grandparents, Diana has shown an amazing commitment to helping people who have found life difficult.

“Following an incredibly challenging year responding to the pandemic Diana has inspired us to keep empowering positive change for those we serve.”

West London Mission has named one of its six services after Diana’s great-grandmother.

The WLM Kathrine Price Hughes (KPH) service, is a 24-hour/seven day-a-week Independent Approved Premise with capacity to house 20 ex-offenders leaving prison where residents receive high-level support as they transition from custody to the community.