Tuesday, May 11
Trending
You are at:Home»News»‘Unsung hero’ Jim retires from police after ‘unprecedented’ 55 years of service in Exeter, Exmouth and Budleigh Salterton

A police ‘unsung hero’ who once walked the beat in Exmouth, Budleigh Salterton and Exeter is retiring after 55 years of service.

Jim Shand’s five-and-a-half decades with the force has been hailed as ‘unparalleled and unprecedented’ – and he’s been nominated for a lifetime achievement award.

Jim has spent the last quarter of a century working in the city’s Middlemoor control room after 30 years as an officer.

“It has been a privilege working with everyone over the years,” said the 73-year-old.

“It has been a fantastic experience working both here and on the streets.

“There has been no better crew to work with, from the top, down to this level.”

Jim, who retires on Sunday, May 2, has been nominated by colleagues for a lifetime achievement gong in the Control Room Awards 2021.

He is shortlisted along with two other finalists from London Fire Brigade and Northumbria Police respectively. 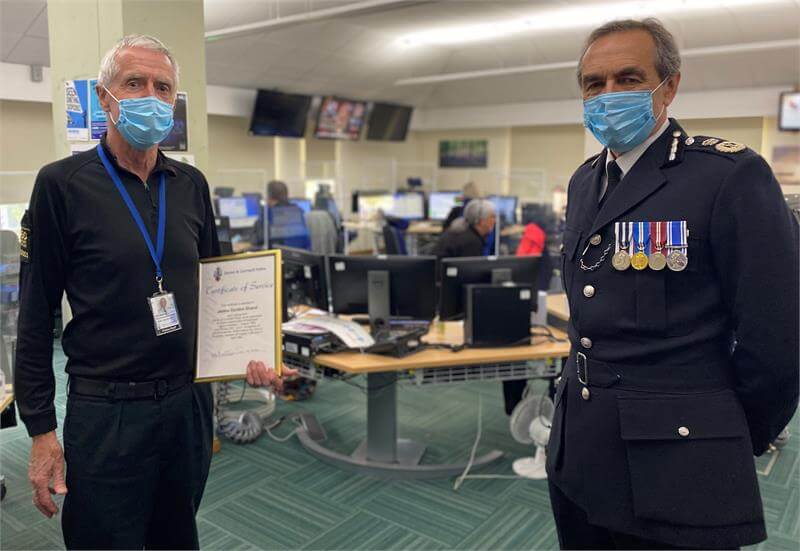 Jim joined what was Devon and Exeter Police in 1966 as a probationary constable, working in Plympton in Plymouth, before moving on to Exmouth, Budleigh Salterton and Exeter.

Later on he took up different roles in the operations room.

Having served as a police officer for three decades and has worked as a resource deployment officer (RDO) in the control room in Exeter for the last 25 years.

‘Fountain of knowledge’ Jim has taken many new members of staff under his wing.

In nominating Jim for the lifetime award, his colleagues in the control room said: “Jim epitomises the phrase ‘unsung hero’.

“There is nothing specific, no one spectacular job he dealt with that gives cause for this nomination.

“Jim is just a hard-working, reliable member of staff who we have been able to count on in the department for many years, for which he is thoroughly worthy of recognition.

“His stories of the old days are absolutely fascinating, he is kind and thoughtful, always offering to wash the cups at the end of the day among other things.

“For this, and many, many other reasons, he will be very sorely missed when he retires.”

A presentation was made to Jim by Devon and Cornwall Police Chief Constable Shaun Sawyer to mark his retirement.

The Chief Constable said: “Jim joined the Devon and Exeter Police is 1966 so this is an unparalleled length of service. It is unprecedented.

“For Jim to be operating in the control room environment after all these years is brilliant.

“I was three years old and the Prime Minister was only two years old when Jim was first keeping the streets safe.

“We wish him well in his retirement.”

Jim has recalled experiencing many different situations in his career – including working in Derbyshire for 12 weeks during the miners’ strike in the 1980s.

One unexpected situation he remembers dealing with was turning a corner in Exmouth to find a roof had slid off a building into the street.

He is looking forward to spending his retirement walking with his two dogs and taming his garden.

Jim’s colleagues nominated him for the lifetime achievement award at the fourth annual APD Control Room Awards which are being staged as a virtual event.

The awards, organised by APD Communications, will take place on Friday 14 May.

They aim to recognise the extraordinary dedication and selfless service to the public provided by control room heroes across the country.

Almost 500 control room employees will receive pin badges of honour from APD having been nominated individually or as a team member.