An Exmouth charity champion has taken on a further year of extreme challenges to raise funds for the Devon Freewheelers, based in Honiton.

Tanya Robinson, of Bradham Lane, in Withycombe Raleigh, last year raised more than £2,000 for the Devon Blood Bikes tackling a challenge a month which included running, cycling and climbing more than 200 miles, and ended with a 73-mile overnight walk from North Devon to the charity’s Honiton headquarters.

Mum-of-one Tanya, whose 2020 year of challenges marked her 40th birthday, is aiming to raise at least £3,000 with a JustGiving page for the Devon Freewheelers, through a fresh set of punishing monthly tasks.

She is gearing up to run a half marathon along the Jurassic Coast later this month.

Tanya, aged 41, who is married to blood biker Jim, said she was inspired to continue fundraising for the Devon Freewheelers in a bid to support the volunteers and charity through the pandemic.

Joining Tanya along the way is her best friend Annaka Lloyd, from North Devon, who also tackled the 2020 challenges. 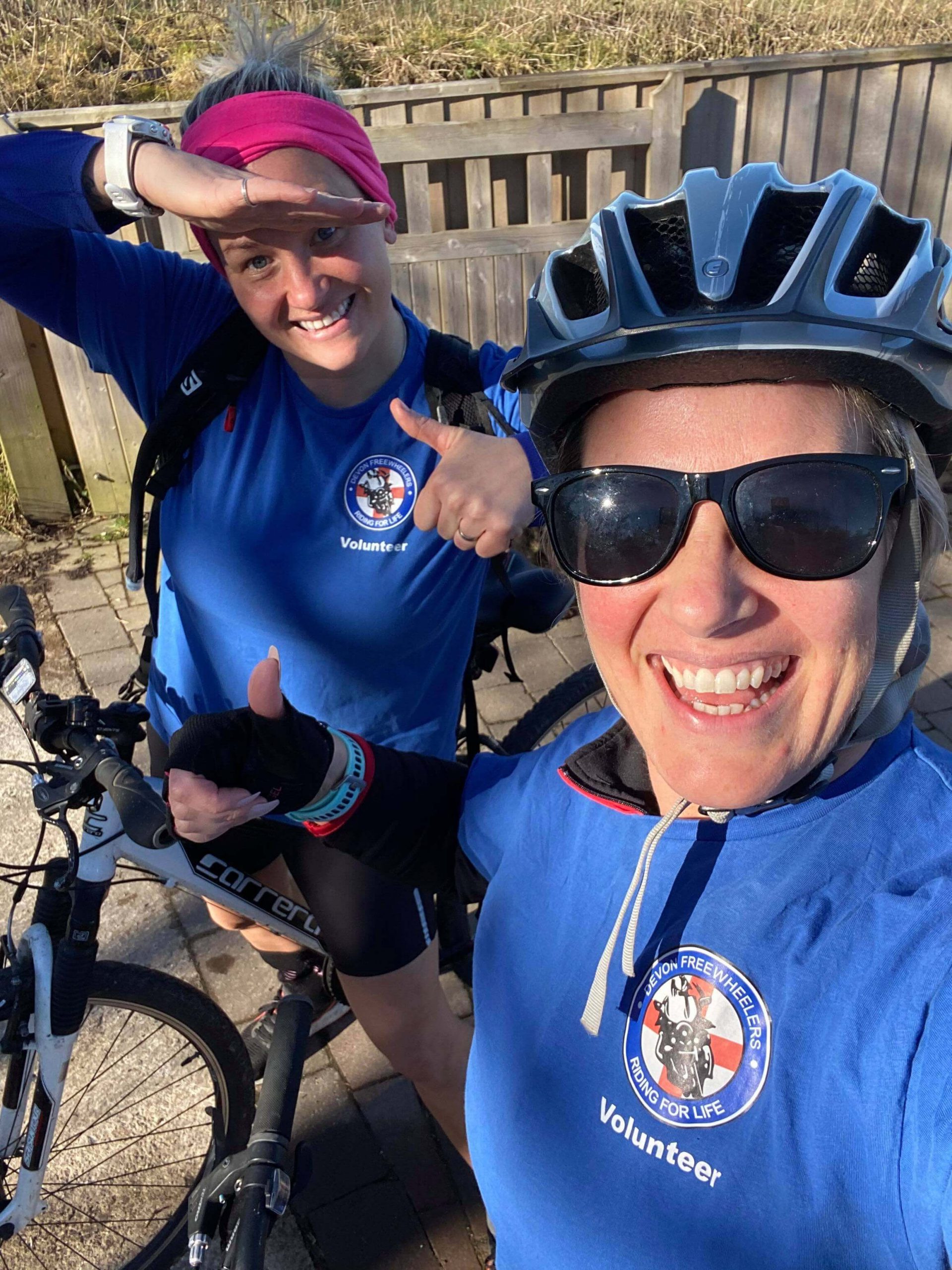 Tanya said: “I see what the Devon Freewheelers are doing. I see Jim and the guys going out; the blood bikes going past. They are going out day after day and that just keeps us going.”

Russell Roe, Devon Freewheelers deputy CEO, said: “It’s been an extremely difficult fundraising year for us because of the coronavirus pandemic.

“If it wasn’t for people like Tanya, we wouldn’t be able to survive. She has given up her own time, away from her family, to raise money for the charity.

“Without our volunteers we would be nothing. I call them our hidden heroes.”

Since the start of the year, Tanya has completed a half marathon around Exmouth with her dog as running buddy. 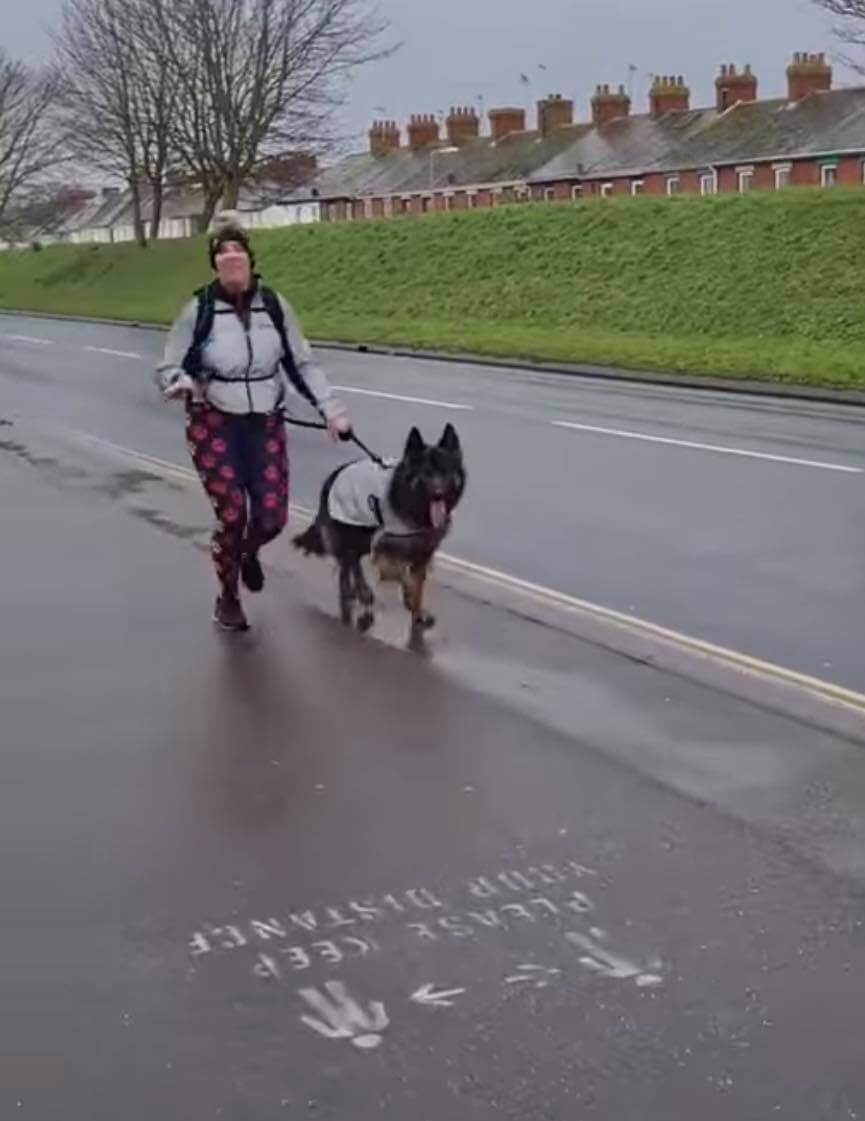 Last month the friends tackled a 20-mile night run on Woodbury Common, with blood biker Jim as the pair’s support and safety team. 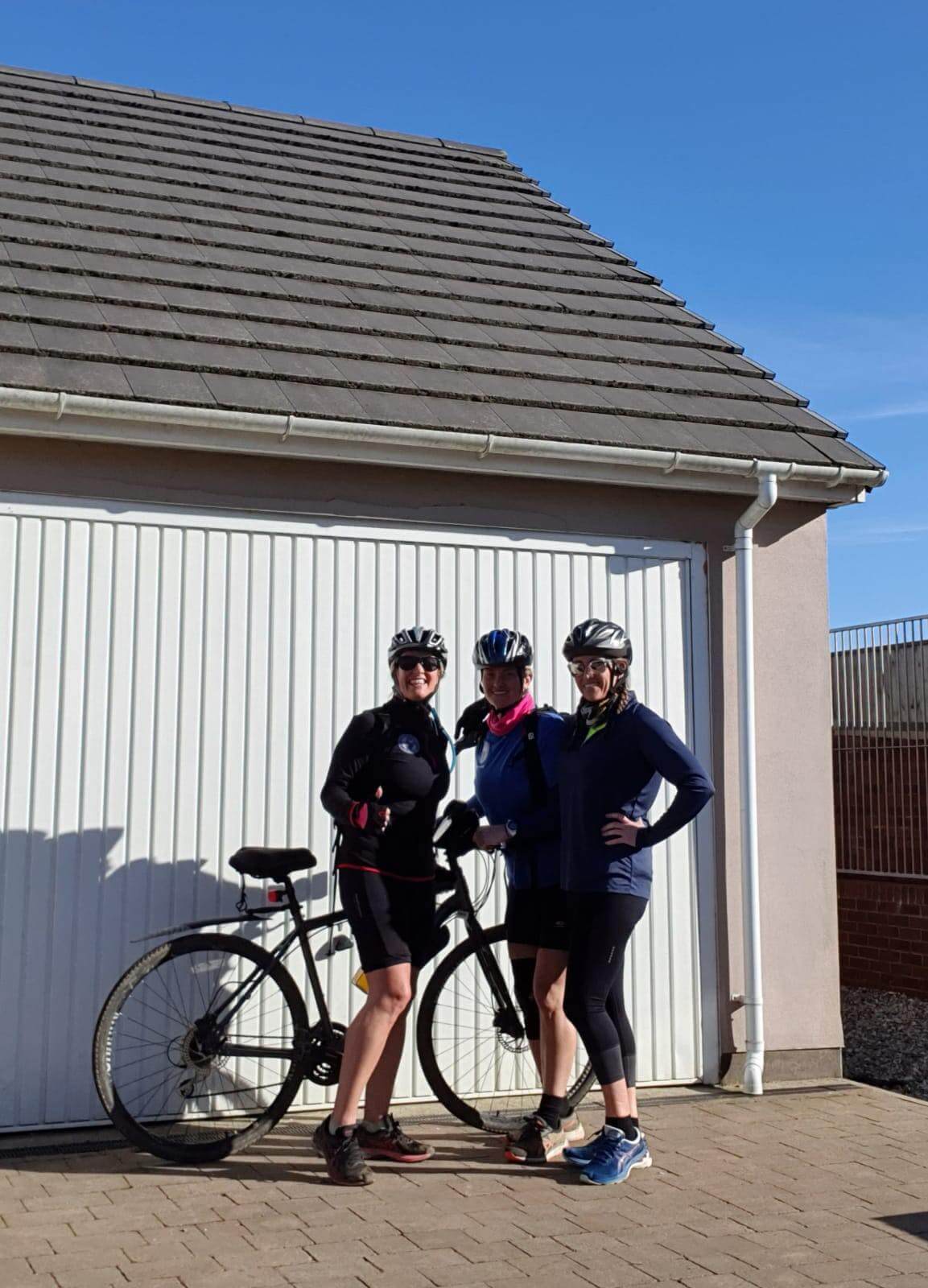 The two friends cycled and ran around the hilly lanes of Spreyton.
Photo: Tanya Robinson. 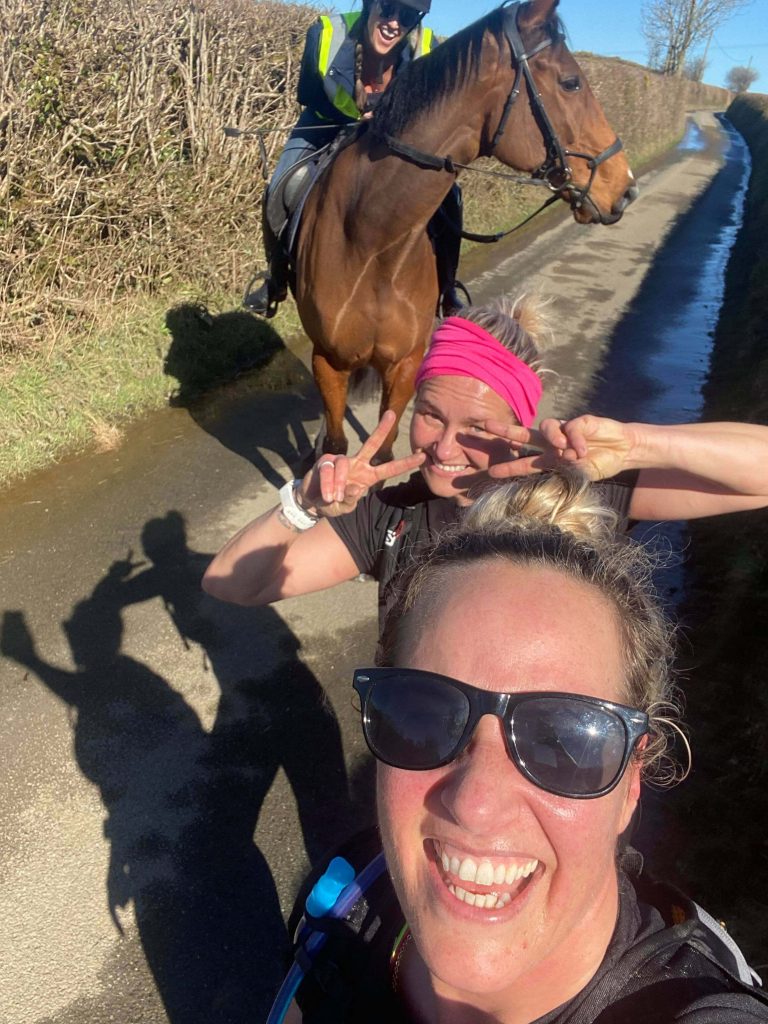 Beauty therapist Tanya said: “It was really hard. It was so dark up there you could just run in circles. You get really disorientated. It’s so hilly as well. The hills are relentless.

“I did get quite grumpy. I did get sick of the hills, but if one of us is grumpy the other one will pick that person up.

“We also did the reverse duathlon of two cycles and one run around Spreyton. It was so hilly it was a hideous area to cycle around and quite difficult.

“Next week is our first organised event, the Jurassic Coast run. It’s going to be hilly and gravelly. It’s your typical coastal path.

“I am hoping the weather will be alright because if it’s raining it’s going to be horrendous.” 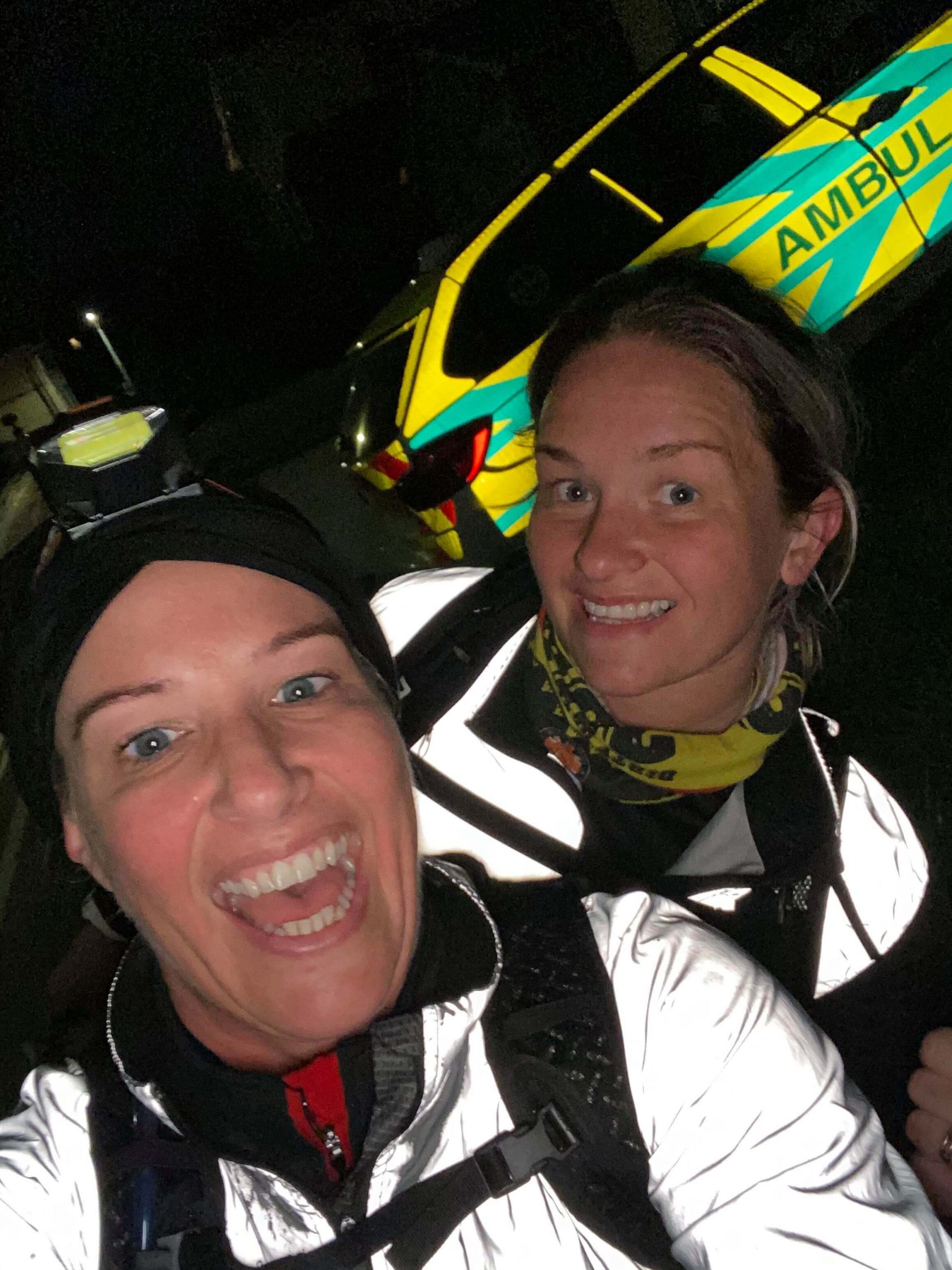 Tanya was inspired to start raising funds for the charity after seeing the ‘amazing’ Devon Freewheelers Blood Bikes ‘step in wherever they can’ as the UK was put into lockdown to stop the spread of the virus.

She made up many of her 2020 trials after the coronavirus pandemic cancelled a host of planned events.

“I thought ‘I can’t drive an ambulance or a motorbike, but I can do this’,” she said.

Tanya felt ‘really sad’ when the year of challenges came to an end, saying at the time ‘we never want it to end’.

The two friends’ final test was a through-the-night walk from North Devon to the Devon Freewheelers Honiton headquarters, which left Tanya’s feet ‘in bits for weeks’.

“I said never again. I have never felt pain like it,” she said.

Her current plan is to ‘probably’ swap monthly challenges at the end of 2021 for ad-hoc fundraising.

Before that, Tanya and Annaka aim to test themselves against the Tough Mudder, in August, the Portsmouth and London marathons – extreme events cancelled in 2020 because of the pandemic – and climbing Ben Nevis in September.

Exmouth: Family shares Tim Mock’s last letter of thanks and unseen story of his lifeboat life