Tuesday, September 28
Trending
You are at:Home»News»Exmouth»‘A true RNLI legend, he will always be part of Exmouth lifeboat history’ – town pays tribute to ‘hero’ Tim Mock, who has died

“A fine man and coxswain, and committed to the Exmouth lifeboat station and RNLI.”

Tributes have been paid to lifeboat ‘legend’ Tim Mock, a retired Exmouth coxswain mechanic, who died on April 10 after a short illness.

His RNLI crew have spoken of their former ‘fantastic’ leader, calling him a true friend, ‘one of life’s great heroes’, who they were ‘proud’ to serve under.

They praised his wealth of knowledge at sea and spoke of their ‘confidence’ that Tim would always bring the crew and lifeboat safely home after every shout.

Tim’s love for the RNLI and dedication to the sea safety service lives on in his son, Henry, who joined Exmouth RNLI as a crew volunteer in 2011 aged 17. 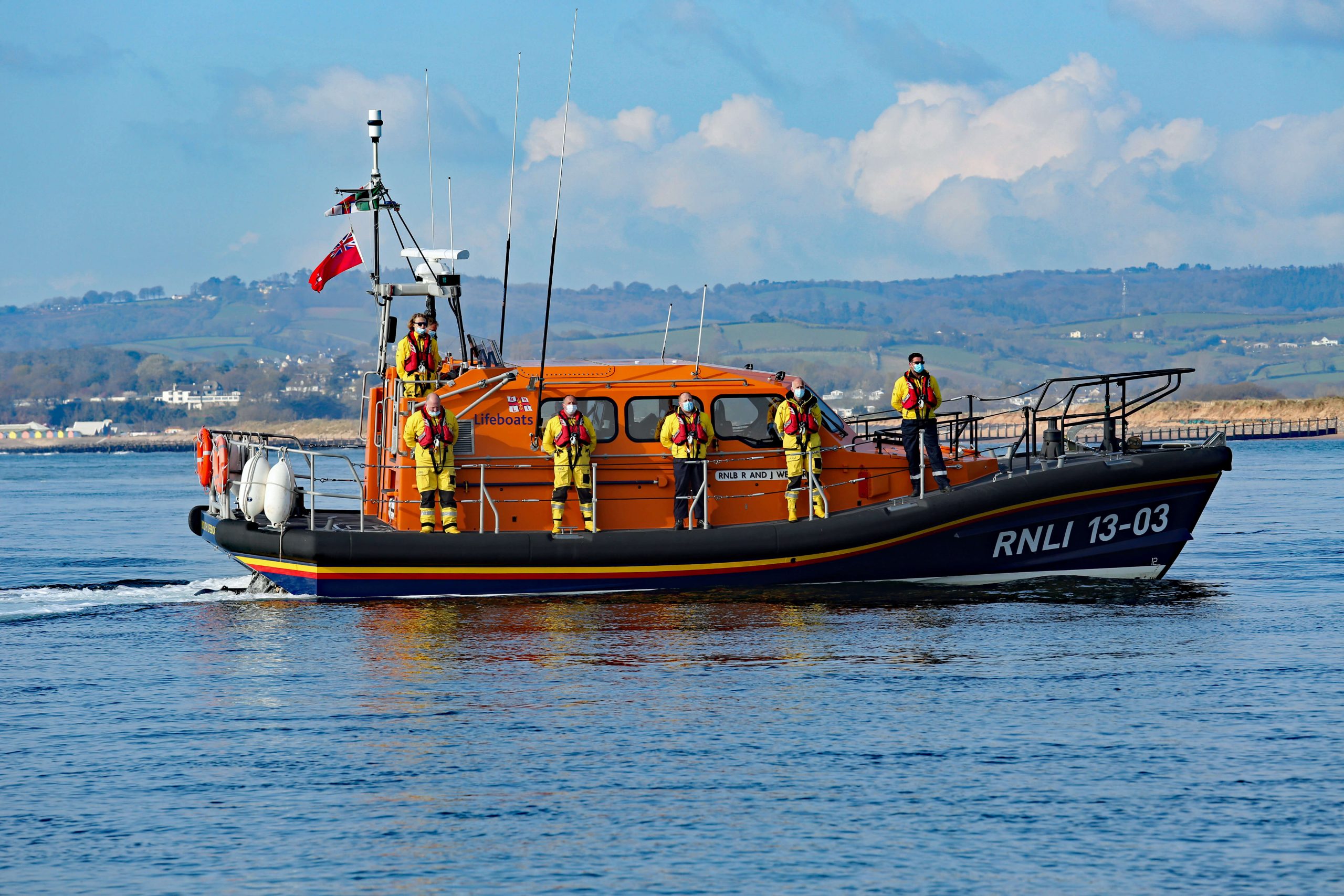 ‘More than just a lifeboat hero’ the volunteers highlighted Tim’s ‘obvious pride’ in watching his son, Henry, follow in his footsteps.

Tim, husband to Mel, introduced Henry to the RNLI from a young age. Their son was Christened on the Louis Marchesi lifeboat on May 12, 1995. 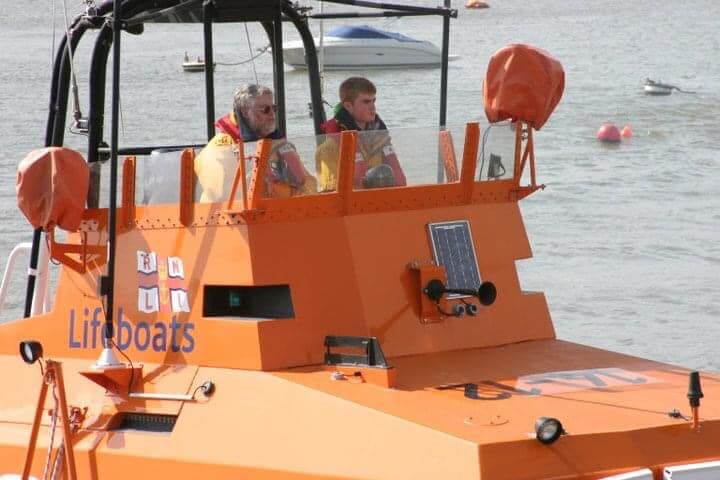 Tim Mock with his son, Henry, who is now on the Exmouth crew as a volunteer.
Photo: RNLI.

Roger Jackson, Deputy Coxswain, said: “Tim will be deeply missed by so many people locally as well as around the coast of the UK.

“A true RNLI legend, he will always be part of Exmouth lifeboat history.

“He was a true friend as well as a fantastic leader of lifeboat crews around the coast.

“I wouldn’t be where I am today without Tim’s wealth of knowledge and skill of training us so well.”

“His passion and professionalism is why we still have a Shannon lifeboat at Exmouth.  Exmouth and the RNLI owe him a debt of gratitude.”

Kevin Riley, retired Exmouth RNLI lifeboat operations manager, said: “Tim – without a doubt – started the growth and sound operational procedures that brought Exmouth lifeboats, its station and the crew into the 21st century and we should all be eternally grateful that Exmouth had this man to do that.

“His legacy lives on.”

Guy Munnings, inshore lifeboat helm and navigator, said: “I am fortunate enough to have served under Tim on many shouts in all sorts of weather, always with full confidence that we would return safely.”

He added: “He will be sorely missed and I will always remember him with fondness, admiration and respect.” 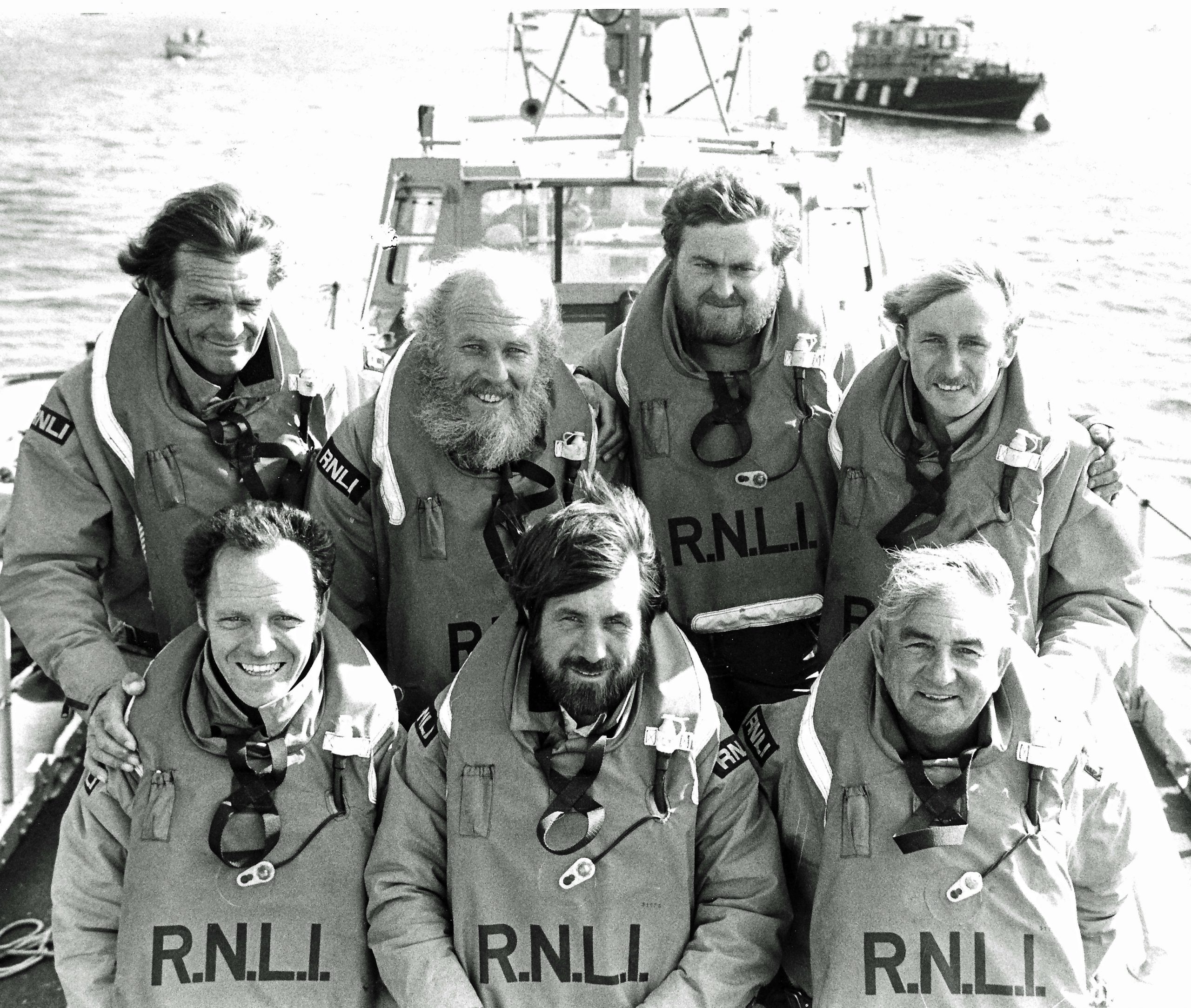 He became boats mechanic three years later, a post he ‘excelled’ at for 30 years, the RNLI said.

The RNLI said Tim saved ‘thousands of lives in the course of a quite incredible career of dedication, bravery, leadership and astute seamanship’.

Tim finally hung up his RNLI pager and yellow lifeboat wellies on Christmas Day 2013 to retire, leaving his post of coxswain mechanic – a role he held since 1998.

Tim’s dedication to the sea safety charity was recognised through accolades including the RNLI Certificate of Service. 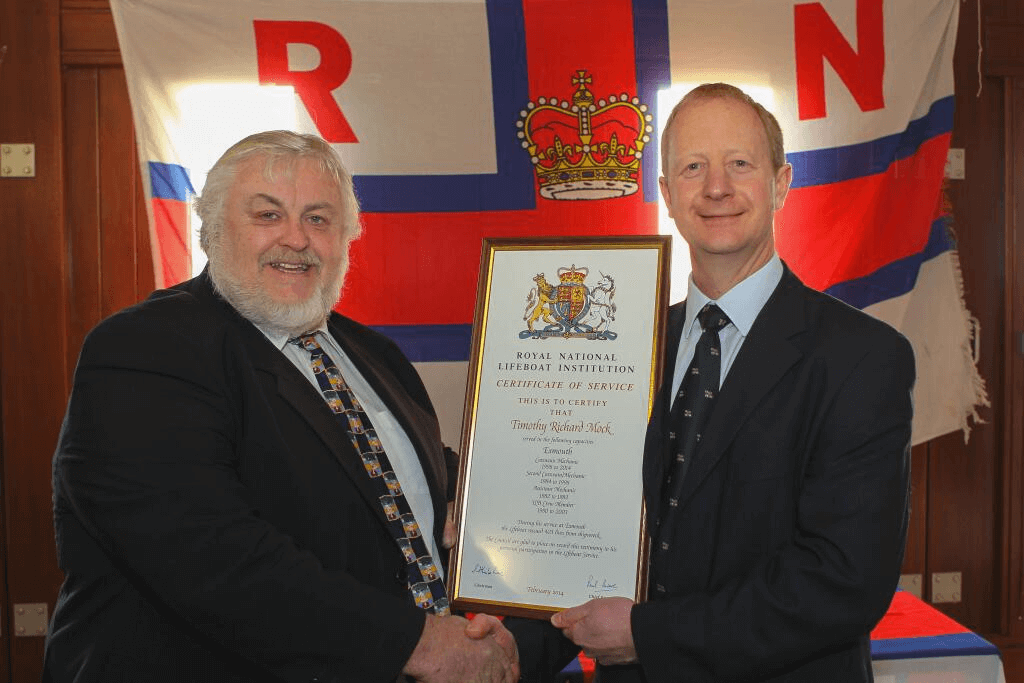 On his retirement in 2013 Tim received an Honourary Membership of the Exe Sailing Club, and in 2014 the Rotary Club Citizen of the Year Award, plus a town council shield for his years of service to Exmouth.

Tim was called a ‘’great asset’ by the Exmouth and District Community Transport Group.

He joined the charity, driving buses for the elderly passengers, on his retirement from the RNLI.

Jill Elson, chairman, of the transport group, said: “Tim Mock was a very valued driver for Exmouth and District Community Transport Group after he retired as the coxswain of the lifeboat.

“Our passengers liked him very much on their travels with us shopping, trips or medical appointments.

“He was a great asset to the charity.”

Councillor Jeff Trail, Devon County Council vice chairman, and former Exmouth mayor, said: “Exmouth will remember Tim for his long and exemplary service to the towns residents and its visitors.

“In times of need, the coxswain is at the helm and making those all-important decisions, very often in extremely hazardous and risky conditions, and Tim’s long service has shown that his decisions over the years have saved many, many lives.”

Simon Davidson, Exmouth RNLI lifeboat management group chairman, said “Even within the RNLI, people of the stature, personality, and with the devotion to service of Tim Mock are rare. No wonder that he was held in such high regard and affection by all who knew him.

“His family, friends, fellow volunteers and Exmouth have lost a colossus.” 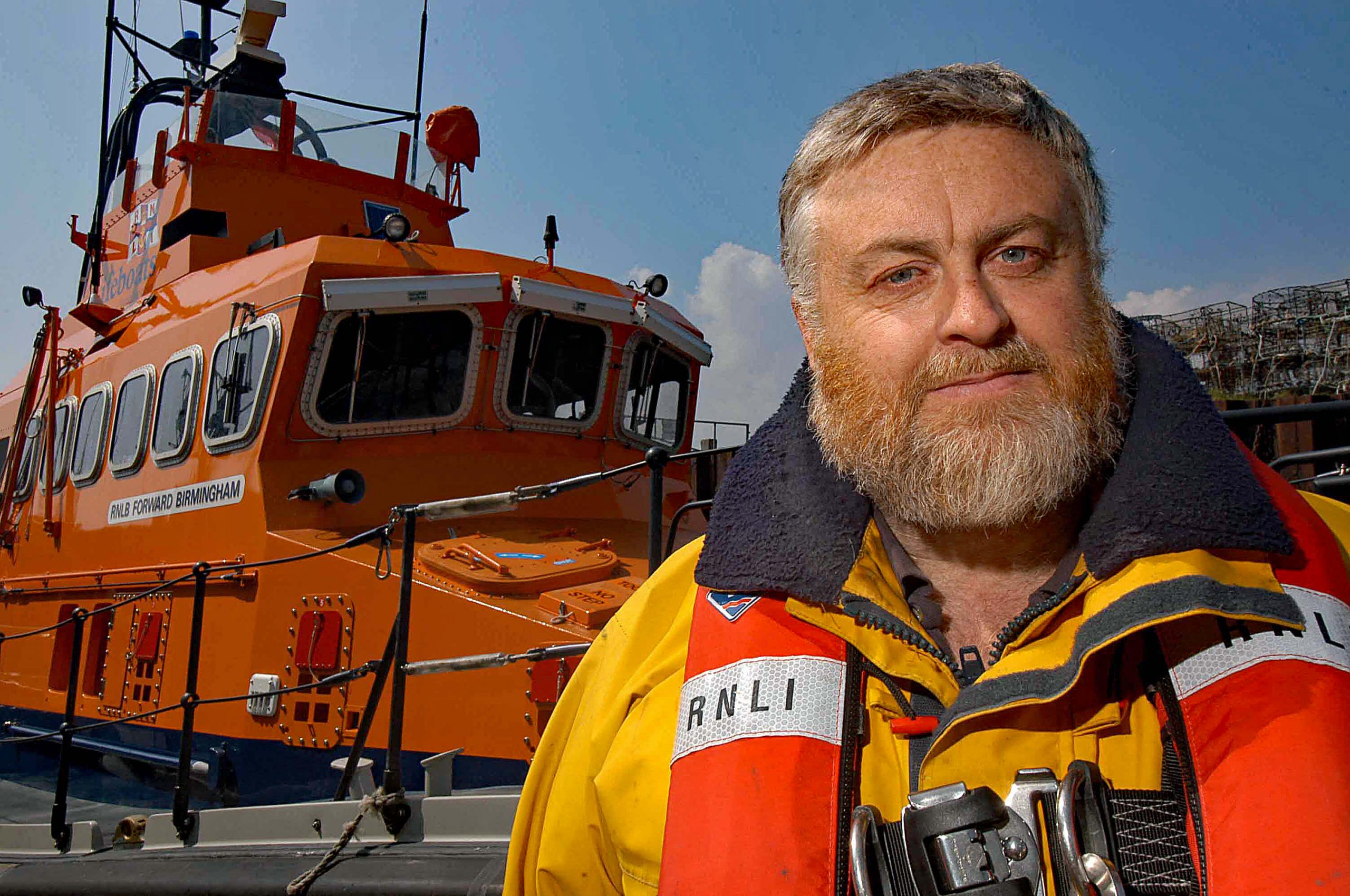 “We will miss him and remember fondly his inspirational character,” he said.

Ian Taylor, the town’s lifeboat operations manager, said Tim was was always the ‘archetypal lifeboatman’, who was ‘strong and calm’ and could be relied upon.

“To me he was a larger-than-life character you were glad to know and proud to serve under,” he said.

Exmouth RNLI Coxswain, Steve Hockings-Thompson, spoke of the ‘honour’ of taking the helm when Tim retired.

Steve said: “He was always there for advice and guidance, which was a great help.”

Second Coxswain, Scott Ranft, who joined the lifeboat crew at the start of 1999, thanked ‘very hands-on coxswain’ Tim for his support over the years, and the times he shared his extensive knowledge and experience with the volunteers.

Tim was known as a family man, and for his humour.

Ed Steele, crew and volunteer, said: “His enduring affection for the lifeboat service was palpable, and his pride in Henry obvious.”

Paul Balbi, volunteer crew and assistant mechanic, said: “One of Tim’s favourite quotes when we spoke about mechanical problems was ‘it could be anything, and probably is’ – that never failed to raise a smile.”

She said: “Little did I realise then that he would become a permanent – call-outs allowing – feature of Sunday lunches, read Topsy and Tim stories to my children, teach them to ride their bikes, marry my best friend and always be there to fix whatever electrical or mechanical problems anyone might have.

“He was more than just a lifeboat hero.”

Exmouth: Family shares Tim Mock’s last letter of thanks and unseen article of his lifeboat life