Tuesday, August 16
Trending
You are at:Home»Features»Exmouth: Family shares Tim Mock’s last letter of thanks and unseen story of his lifeboat life

A last letter of thanks penned by Exmouth RNLI ‘hero’ coxswain Tim Mock shortly before he died has been shared by his family.

Married Tim, who died on April 10 after a short illness, wrote the ‘letter of praise’ with the intention of it being made public after his death.

Tim thanked all who had helped him throughout his short illness and urged consideration for those caring for the terminally-ill through the pandemic.

Signing his note off with his name, Tim wrote ‘When you read this I will have passed away with the cancer.

“This is not an obituary but a letter of praise for all the people family, friends and the care profession that have been so good at looking after my medical needs throughout.

“Whilst the Covid situation has been overwhelming to society there is still the medical situations we find ourselves in, on-going in the background, and these professionals deal with such passion.

“Please be considerate to them, value them and even a thank you doesn’t go amiss.’

Exmouth this week rallied to pay its respects to ‘lifeboat legend’ Tim, who served the with the town’s RNLI crew for 34 years, until his retirement at the end of 2013.

As his former crew spoke warmly of the ‘fantastic leader’ they trusted to take them to sea – and always bring them safely home – a previously unseen article, written about Tim’s dedication to the RNLI, has been made public.

The feature, Tim Mock; My Lifeboat Life, was written by Emma de Saram, Exmouth RNLI volunteer deputy lifeboat press officer from 2011 until 2019, with the support of Melanie Mock, Tim’s wife.

Emma penned the article on the eve of Tim’s retirement from the town’s RNLI, in December 2013.

Here Emma writes: Tim Mock joined as a crew volunteer at Exmouth RNLI in April 1980, at the age of 21.

‘In 1980, I joined as an inshore lifeboat crew volunteer on a D-class inflatable with the first series of Mariner outboard engines, a radio that kept falling out of its mounting, a first aid kit and not much else. We didn’t have dry suits and the lifeboat operated for the summer season only. When the season started each year, the new engine required six hours of running in time! When I was a crew volunteer on the inshore lifeboat, I had two near capsizes and a dislocated finger.’

The first all-weather lifeboat Tim experienced was the Solent-class City of Birmingham. Built of steel and aluminium, this lifeboat was very strong and said to ‘push through the waves like a bulldozer’.

The Solent only had a few call-outs a year and Tim recalled spending time polishing the metal up to impress visitors to the lifeboat station. When the City of Birmingham was away for a refit, the station was given Watson and Barnett-class relief lifeboats.

One Watson-class Tim remembered fondly was the Winston Churchill. Originally a Civil Service lifeboat built after the Second World War, she was made from wood with a semi-open wheelhouse. At 47 foot and six inches, the Winston Churchill performed well in rough weather by gliding over waves in Lyme Bay. 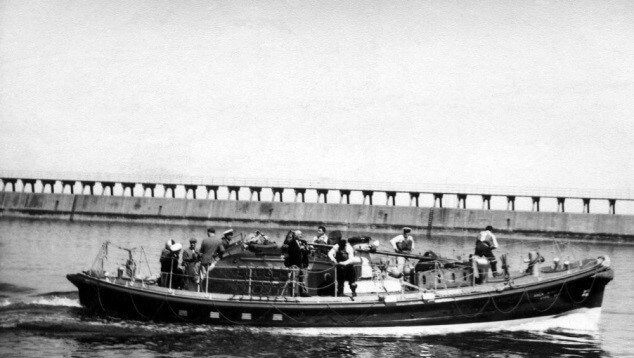 On 17 July 1983, Tim became Exmouth lifeboat’s full-time Mechanic. In the same year, the Solent-class was replaced by Brede-class, Caroline Finch and it was Tim’s responsibility to collect her from Rye, East Sussex. This was an intermediate class lifeboat with a weather restriction but capable of 21 knots when the rest of the RNLI fleet were managing 16 knots. The class was withdrawn in favour of all-weather lifeboats, but Caroline Finch acquitted herself well whilst in service at Exmouth for 11 years and was still used as a lifeboat in South Africa until late 2020. 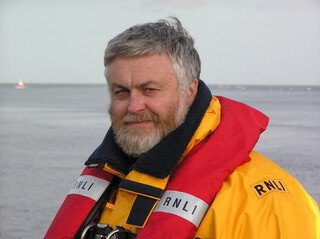 With the desire to re-introduce an all-weather lifeboat back to cover Lyme Bay, the charity allocated Exmouth RNLI a steel and aluminium Waveney-class in 1994. The Louis Marchesi of the Round Table had a shelter/open wheelhouse design which offered excellent visibility but left the crew volunteers cold and wet. Tim described a difficult passage one Christmas to deliver a relief Waveney to Chatham, where she would be left as a museum exhibit; 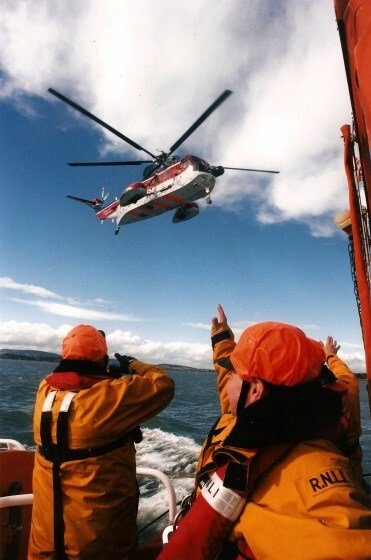 Aboard the Waveney-class in 1996 with Coastguard helicopter Hotel Lima.
Photo: with permission Mel Mock.

‘We left Exmouth in thick fog at 6am bound for Yarmouth, Isle of Wight. From midday onwards, we were enjoying glorious sunshine and calm seas. The next day, the weather deteriorated with easterly winds and moderate sea conditions for our next port of Dover. During the day, the radar broke and mist combined with rain made the trip that much more difficult. Luckily, the radar was fixed at Dover as during the following day, en-route to Sheerness, we experienced a very cold and grey morning, followed by snow blizzards. The open wheelhouse became a bit of a challenge as we navigated up through the estuary to Sheerness, by which time we were very pleased to get off!’

It was on the Louis Marchesi on 12 May 1995 that Tim’s son, Henry was christened.
Henry was the first christening aboard a lifeboat in Exmouth and the service was conducted by Revd. Dr Geoff Harris.

The event took place on a windy day on the mooring with the guests watching from Deputy Launching Authority, Andy Herbert’s boat. 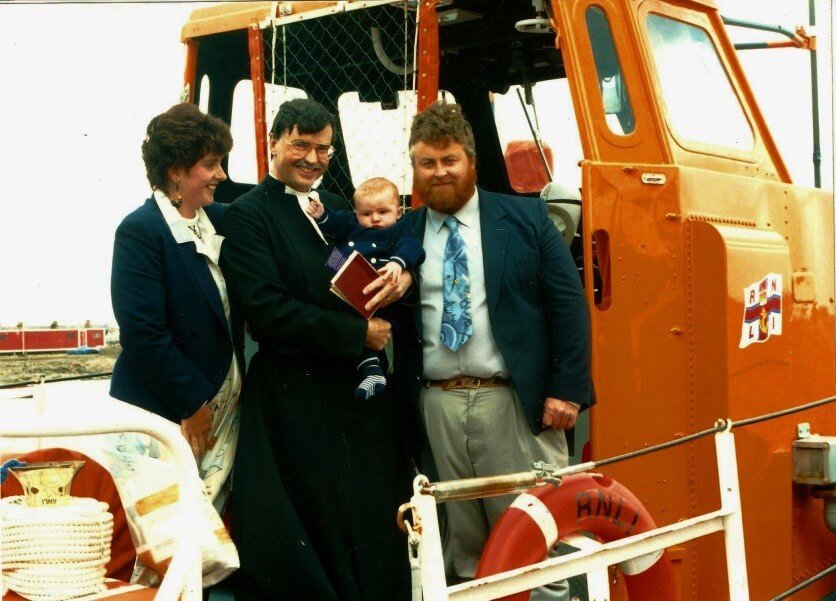 Henry’s christening aboard the Waveney-class Louis Marchesi of the Round Table, in 1995.
Photo: with permission Mel Mock.

A year later, Exmouth RNLI was given a Trent-class, one of the first 25-knot all-weather lifeboats. The Forward Birmingham and the earlier Solent-class City of Birmingham were funded by supporters of the lifeboat station in the Midlands. The Trent-class experienced a series of refits and various repairs at boatyards over a 12-year service. 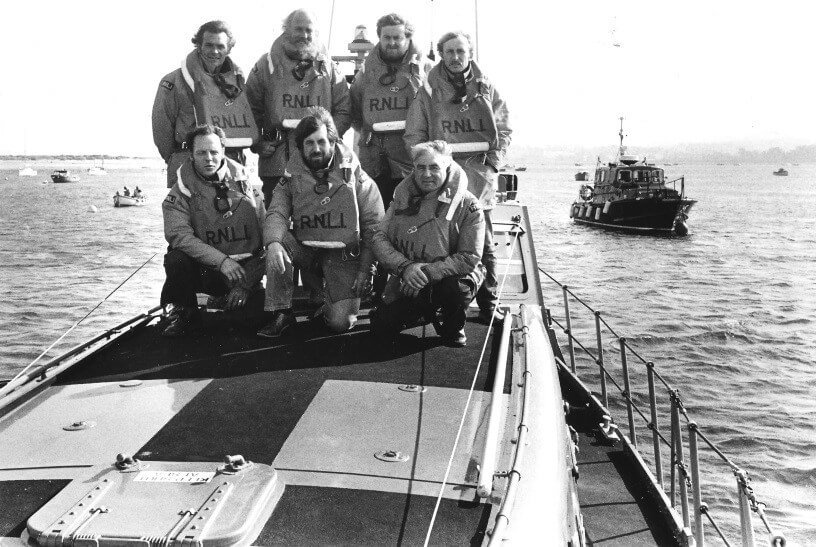 Crew on the Solent-class, City of Birmingham with Caroline Finch in the distance, 1983.
Photo: with permission Mel Mock. 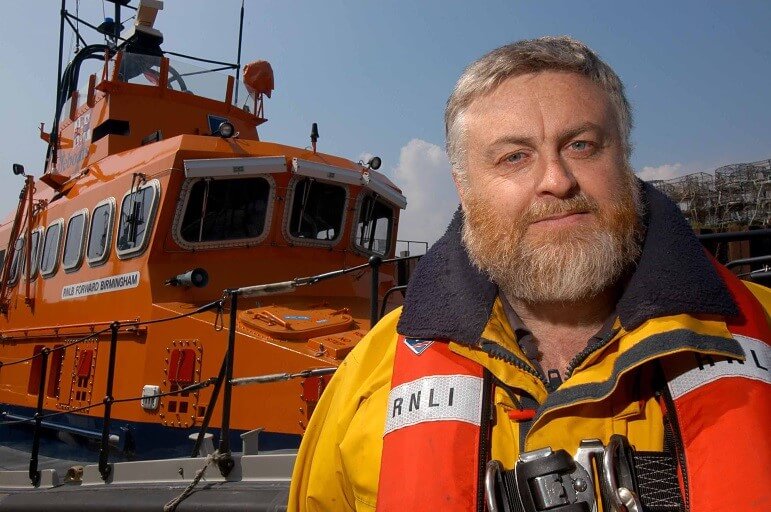 Tim when he took over Forward Birmingham, in 1998.
Photo: Neil Palmer.

While the Trent was away, the station would often receive a Tyne-class relief lifeboat. Tim reminisced;

‘The Tynes proved to be very successful lifeboats for us, much enjoyed by myself and the crew. The engine’s 2×2 stroke diesel Detroit engines had a sound all of their own. Having spent many hours in them, I would have to say that it was a very versatile boat, easy to use and probably the class I favoured the most.’

By this time in 1998, Tim had become the Coxswain Mechanic at Exmouth. Due to the continual shoaling of the river Exe, he made the difficult decision to request that the Trent be withdrawn and replaced by another all-weather lifeboat. 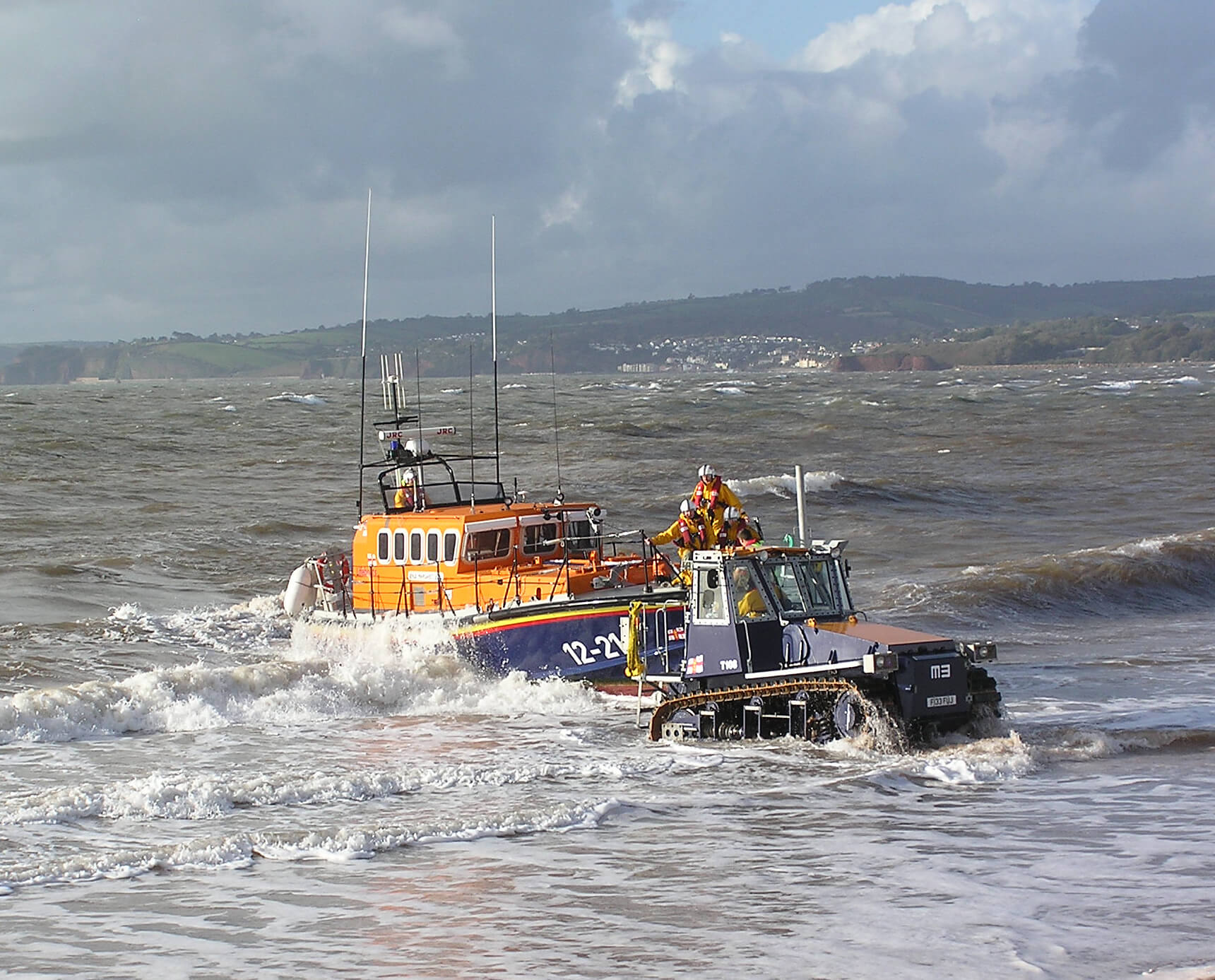 The Mersey-class Margaret Jean arrived in 2008 and lay afloat until a new boathouse was identified and built in 2009. 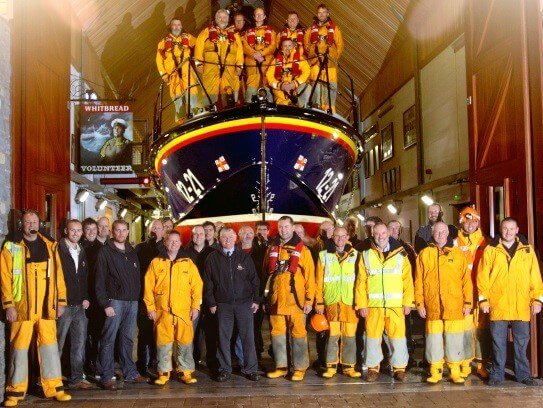 The new boathouse was built to specifications to house the new Shannon-class and therefore, minor modifications were made to house the Mersey temporarily. Looking back on the charity’s fleet in his career, Tim said;

‘We have been fortunate to have the best lifeboats the Institution could provide and it’s fair to say that there have been occasions when I wouldn’t have launched in anything else.’

In 2011, Tim’s son joined the lifeboat crew at the age of 17. Henry became one of the country’s youngest Head Launchers for the Mersey carriage launch and recovery system. He is now an inshore lifeboat Helm and a Head Launcher and Tractor Driver for the Shannon Launch and Recovery System.

Tim and wife Melanie were proud of him having done extremely well in a relatively short period of time, demonstrating a mechanical ability he definitely appeared to have inherited.

Speaking of her experiences as a lifeboat Coxswain’s wife, Melanie said;

‘I cannot think of another job where you work your hours and are then on call 24/7 with call-outs – it’s all in a day’s work. That’s the reality and way of life. The golden rule is to have transport and always have a contingency plan because it’s guaranteed if you have to be somewhere together, there will always be a ‘shout’.

I have been known to eat all three Christmas puddings at a Christmas meal when the pagers sound!

‘I believe lifeboat families are truly unsung heroes as it’s not always easy to pick up the pieces and carry on, or be the one who’s left behind ashore. We all have our part to play in supporting and encouraging our dedicated volunteer lifeboat crews.’ 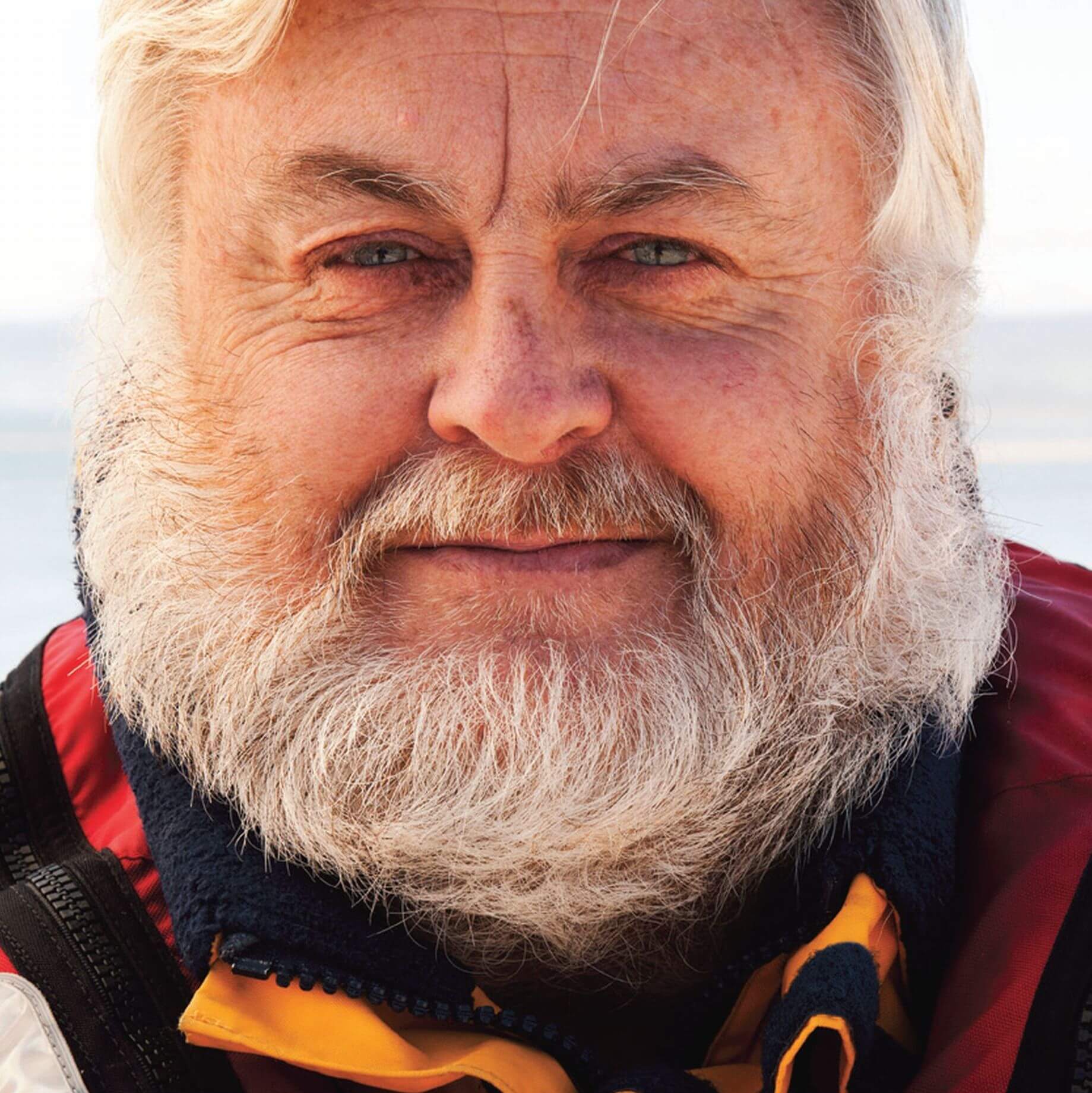 ‘A true RNLI legend, he will always be part of Exmouth lifeboat history’ – town pays tribute to ‘hero’ Tim Mock, who has died