An East Devon pub team has been ‘overwhelmed’ by community kindness after a thatch blaze ripped through the inn’s roof at the weekend.

Fire crews from three counties tackled the blaze at the White Hart Inn, Wilmington, near Honiton, shortly before midday on Sunday morning (April 4).

The pub resumed its takeaway service on Tuesday (April 6) thanks to the community rallying to help clear the garden and grounds of thatch and other fire damage.

The pub team said the ‘severe fire’ caused ‘significant damage throughout the building’.

The team took to social media to thank everyone who helped with the clean-up efforts, saying it was ‘pleased’ it could resume its takeaway service.

“We are very grateful for your support and are looking forward to buying you a drink soon.

“Thank you so much.” 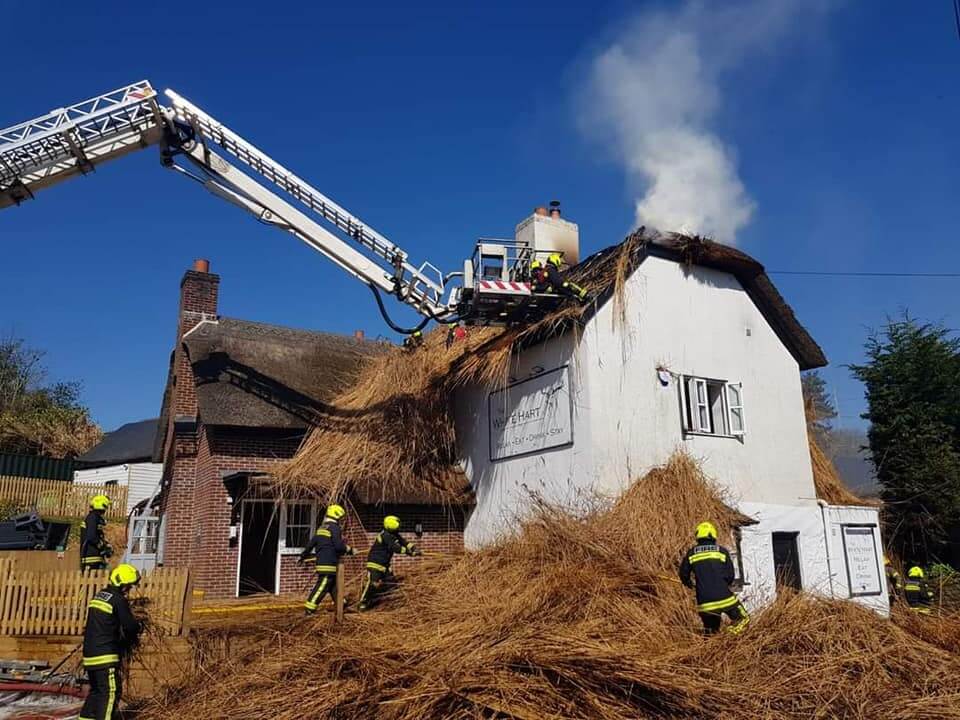 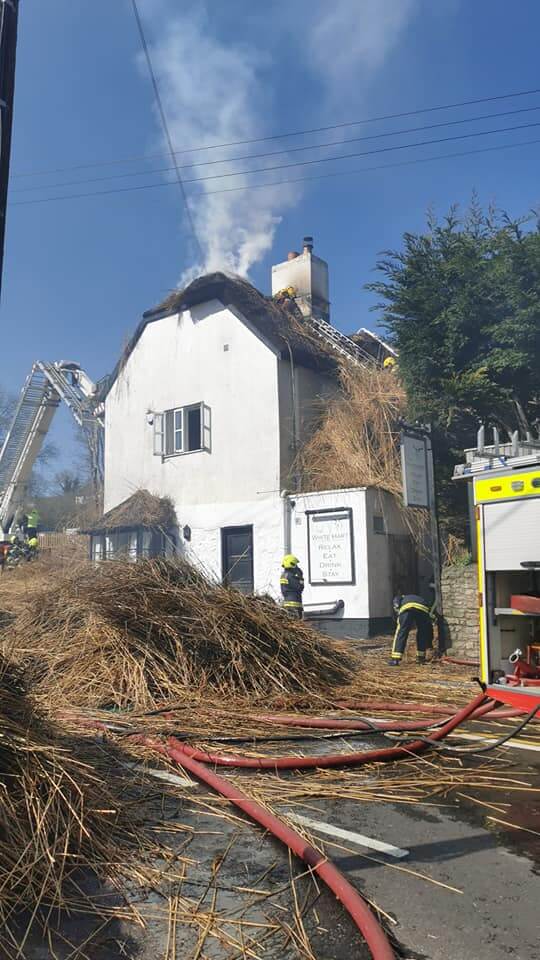 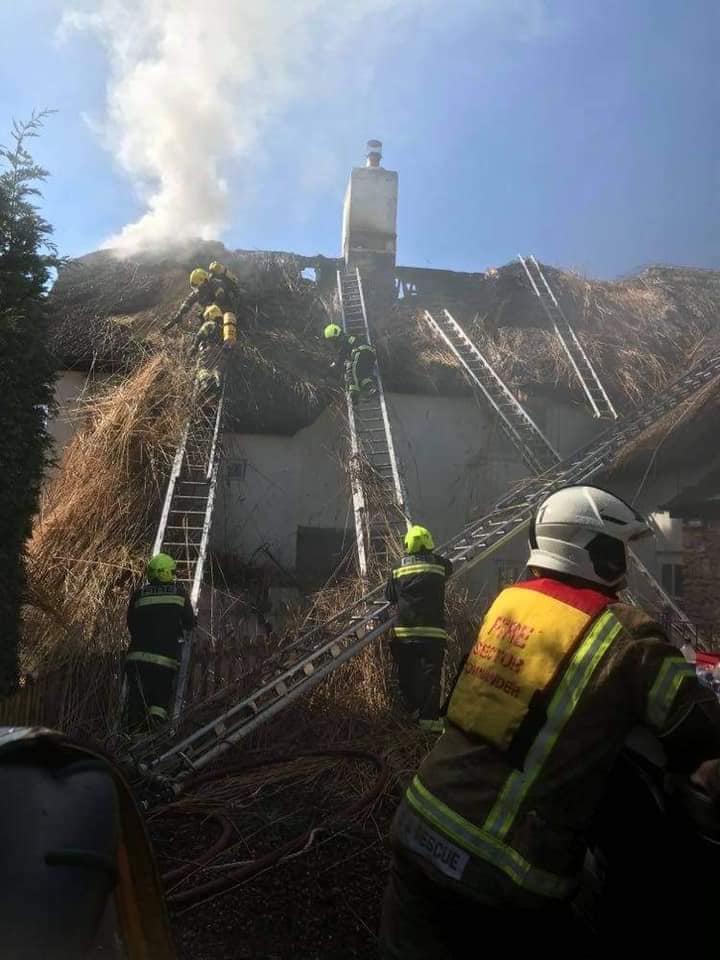 Firefighters from Honiton, Axminster, Colyton, Ottery St Mary, Seaton, Charmouth, Lyme Regis and Sidmouth were among the 23 appliances from Devon, Somerset and Dorset sent to the White Hart Inn, Wlimington, shortly before midday, to tackle the accidental blaze.

“Thankfully these actions allowed us to save the majority of the property.”

They added: “On behalf of us all we would like to thank the local community and the pub for the refreshments.”

The fire service said the cause of the blaze was accidental. 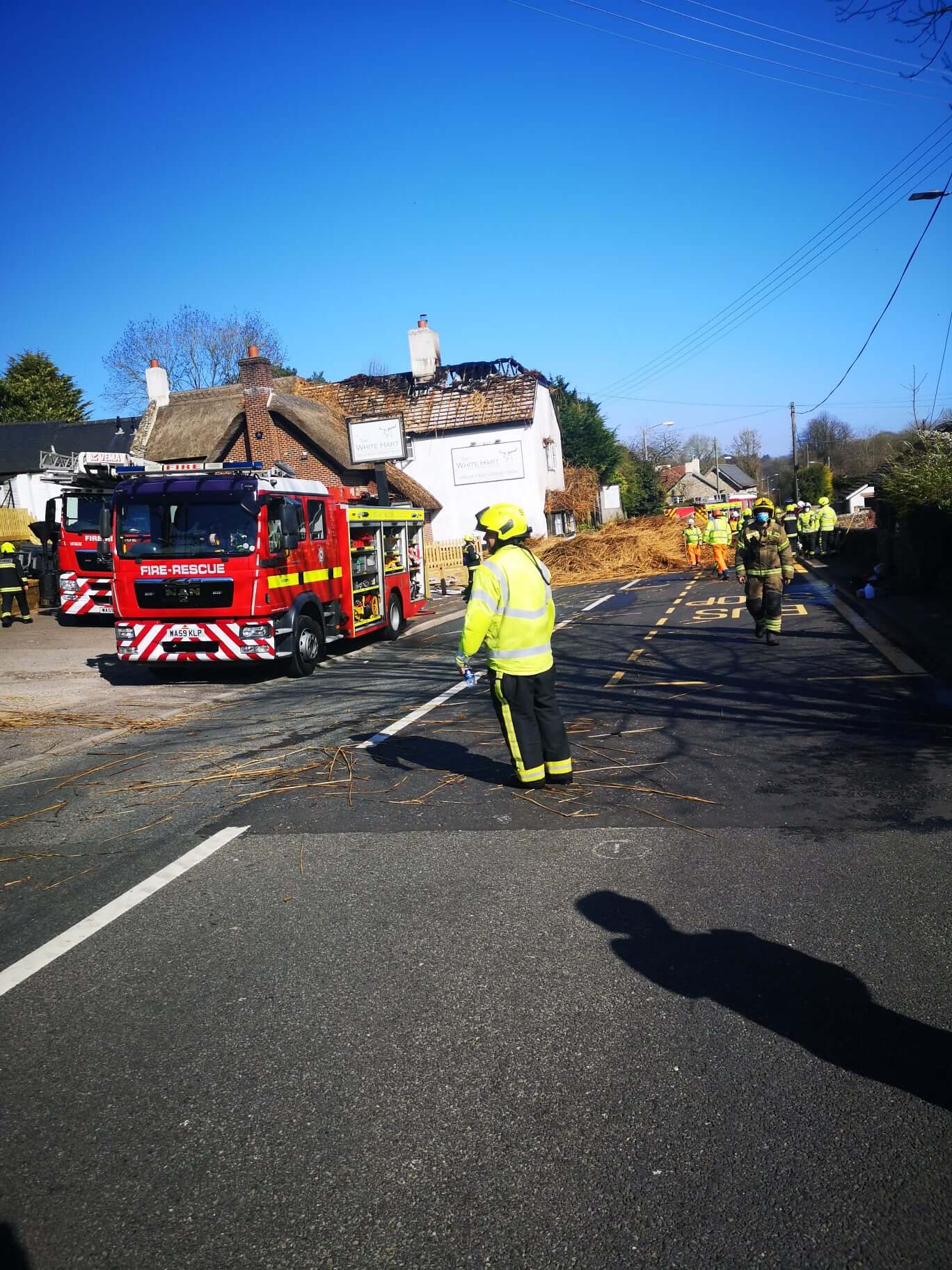 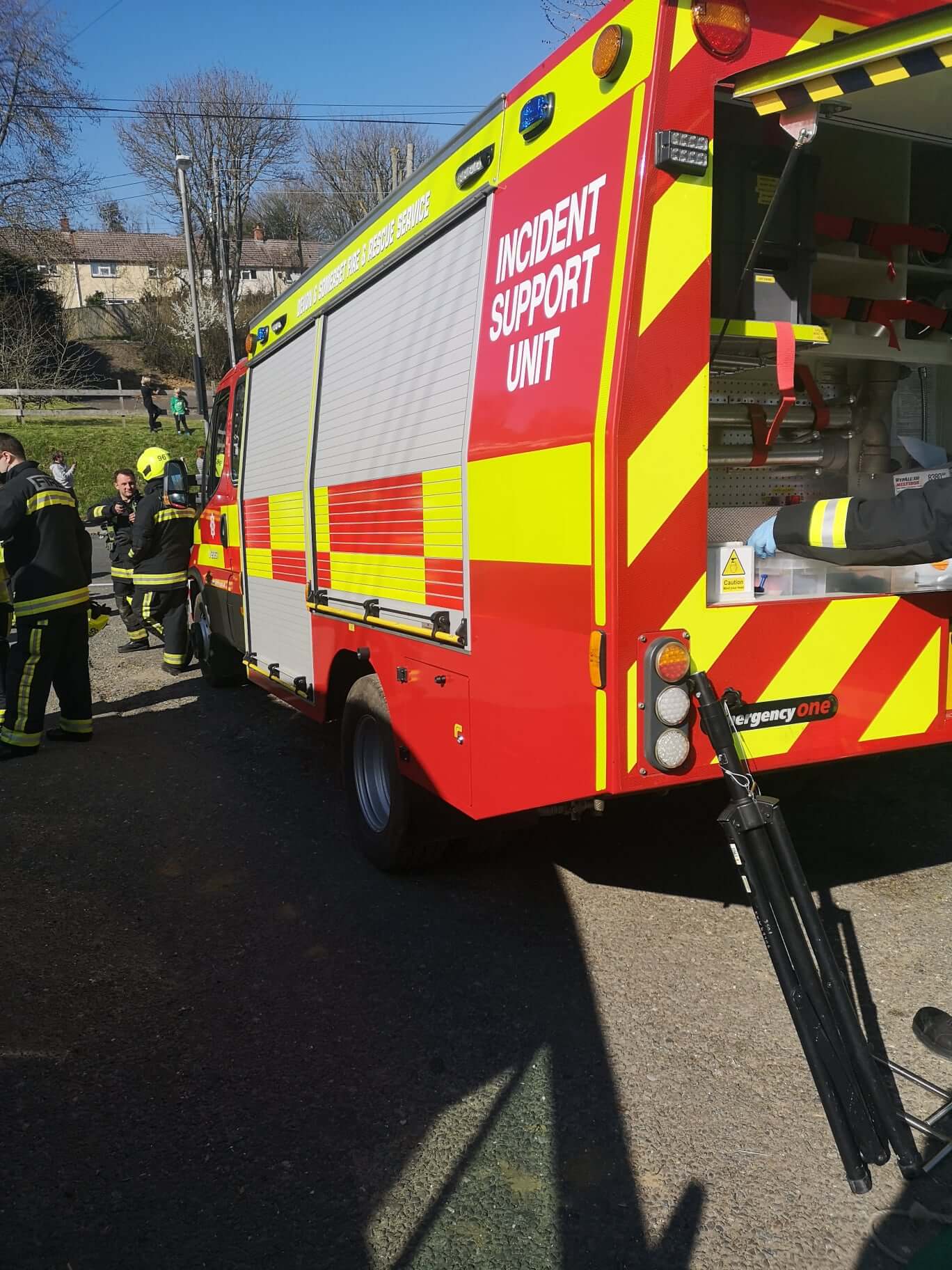 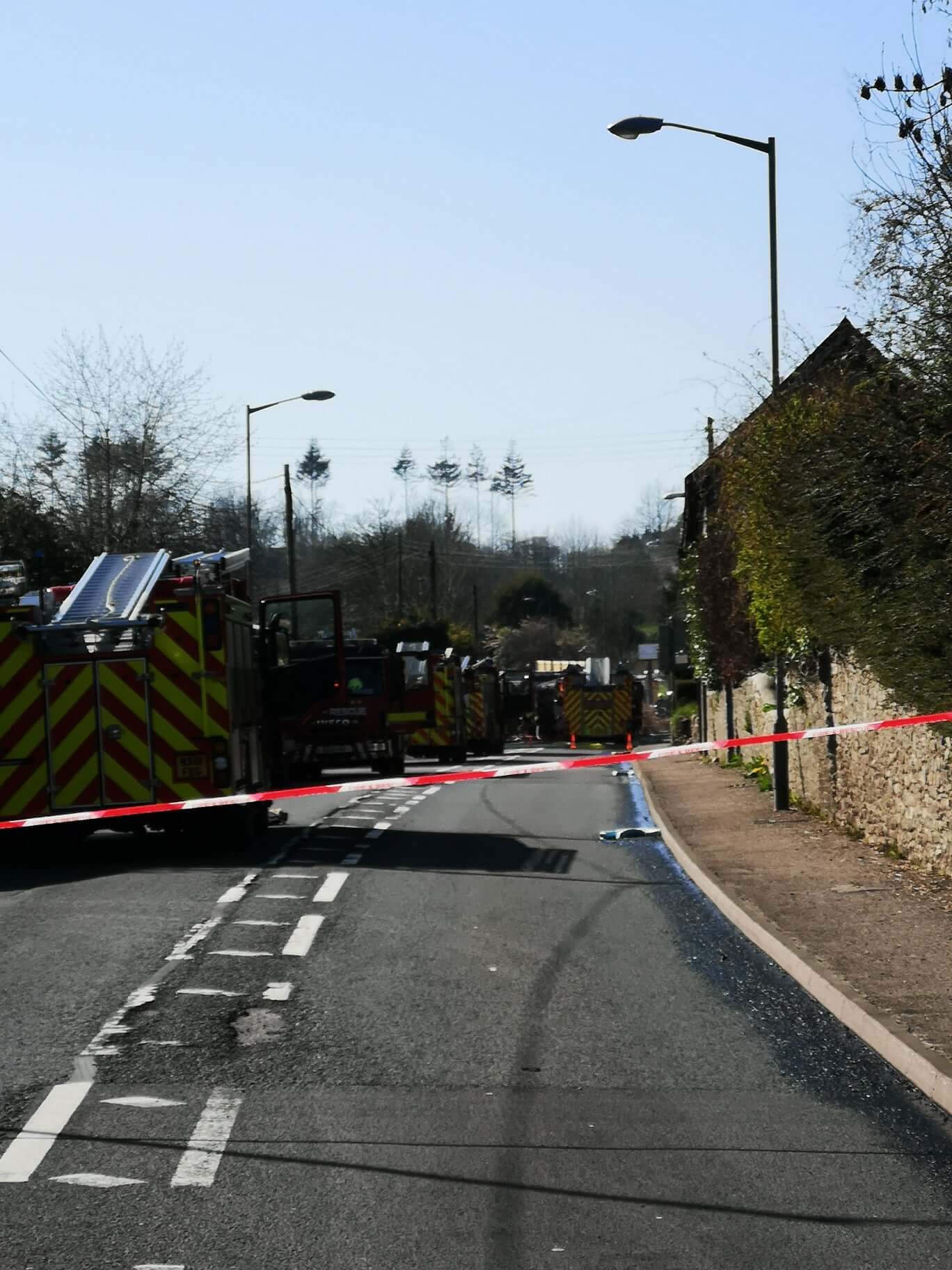 A water carrier and an aerial ladder platform from Danes Castle, in Exeter, the welfare unit from Crediton, a high-volume pump from Taunton, the incident command unit from Wiveliscombe, the environmental protection unit from Taunton and the incident support unit from Martock, were sent to the scene. 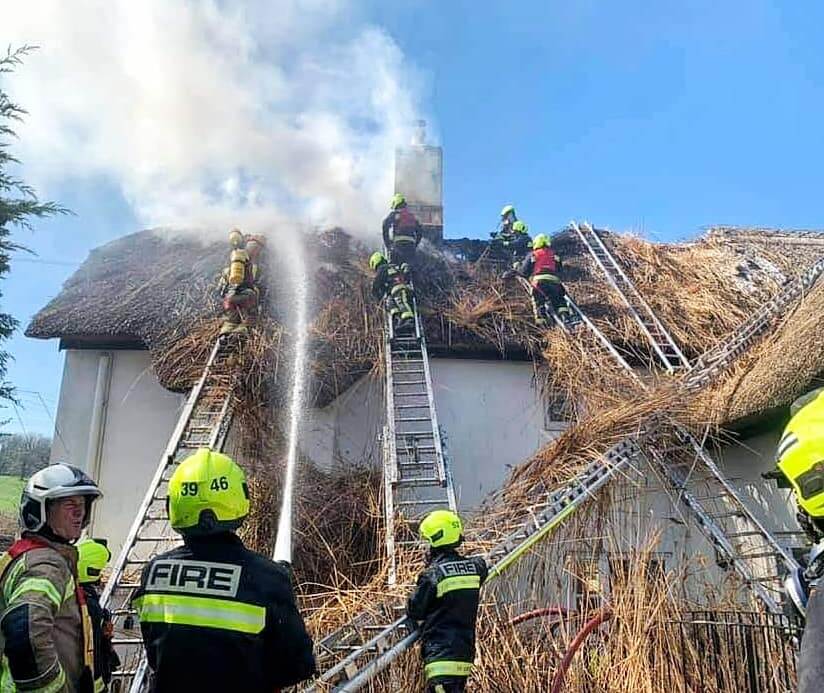 On arrival, the first crew assessed the scene and requested another four pumping appliances to be mobilised.

These were sent on from Middlemoor, in Exeter, Bridport and Exmouth.

The crews stripped thatch from the roof in a bid to create the fire break. 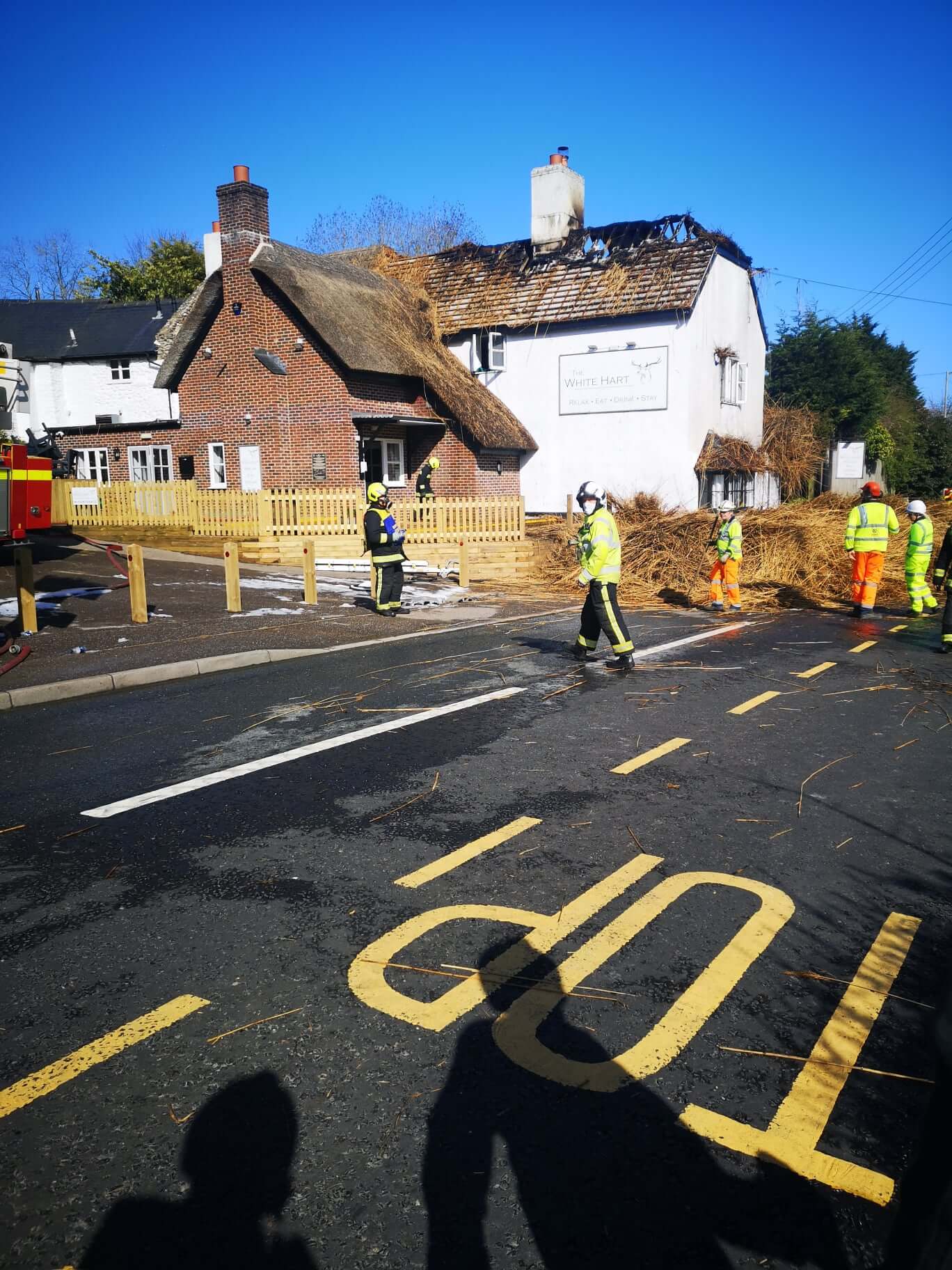 Devon and Somerset Fire and Rescue Service said an environmental risk assessment was carried out.

Shortly after 2pm the officer in charge increased fire engines to 15, with three more crews arriving from Cullompton, Newton Abbot and Chard.

At around 2.30pm the crews had successfully created a fire break and continued to strip away the affected parts of the thatch.

By 4.30pm the fire service scaled down the incident to eight fire engines at the scene from Bridgwater, Bampton, Witheridge, Dawlish, Ashburton, Yeovil, Crewkerne and Paignton, as ‘steady progress’ was being made.

An hour later the fire service further reduced crews at the scene to six appliances, as firefighters finished the stripping of the thatch from the roof, covering the area with salvage sheets.

By 7.30pm five fire engines remained at the scene as crews finished working on the roof with the help of the aerial ladder platform from Exeter.

The fire service said a thermal imaging camera was used to carry out an external and internal inspection of the building.

The fire service left the scene after a final inspection at 10.30pm.

Afterwards the pub owners carried out two-hourly checks of the premises, the fire service said.