Sympathy for the wife of a blood biker for a charity based in Honiton raised almost £500 when Devon Freewheelers volunteer Stephen Nash shaved off his winter beard in return for donations.

Married for 30 years Tracey Nash, aged 57, joked divorce had been avoided by a whisker after husband Stephen agreed to bin the beard if he could raise £150 for Devon Freewheelers, with its headquarters in Honiton.

When sympathetic supporters rallied round to give £470, Stephen said farewell to the face fuzz and Tracey no longer had to ‘kiss a hedgehog’.

To save my dignity and make my wife happy, and save the marriage, I said if I could raise £150 for Devon Freewheelers, I would shave it off…

Stephen, also 57, a volunteer blood biker for Devon Freewheelers, said: “I thought I might be able to raise £60 or £70 and I could get to keep it.

“To save my dignity and make my wife happy, and save the marriage, I said if I could raise £150 for Devon Freewheelers, I would shave it off. I didn’t think I could get that.

“It got to about £140 then there was a lull, then it all took off. People must have shared it on social media because I am not an influencer or anything. I couldn’t influence a cup of tea out of a tea pot.

“I am surprised at the amount. It was just a bit of fun to raise some money.

“I not only raised the money, it went to £470. So people must really like my wife and hate my beard.

“My wife says I look twenty years younger, which is a plus side which gets me down to about sixty.

“The trouble is I am fifty-seven so I have got to think of something else to shave now.”

He added: “It’s a difficult time to get funds raised at the moment for the Devon Freewheelers.

“We haven’t got our usual avenues open to us and we have potentially lost another summer.

“Because we can’t attend the normal functions – like everyone else – it’s difficult raising funds so we are just trying to come up with more original ways to raise money.” 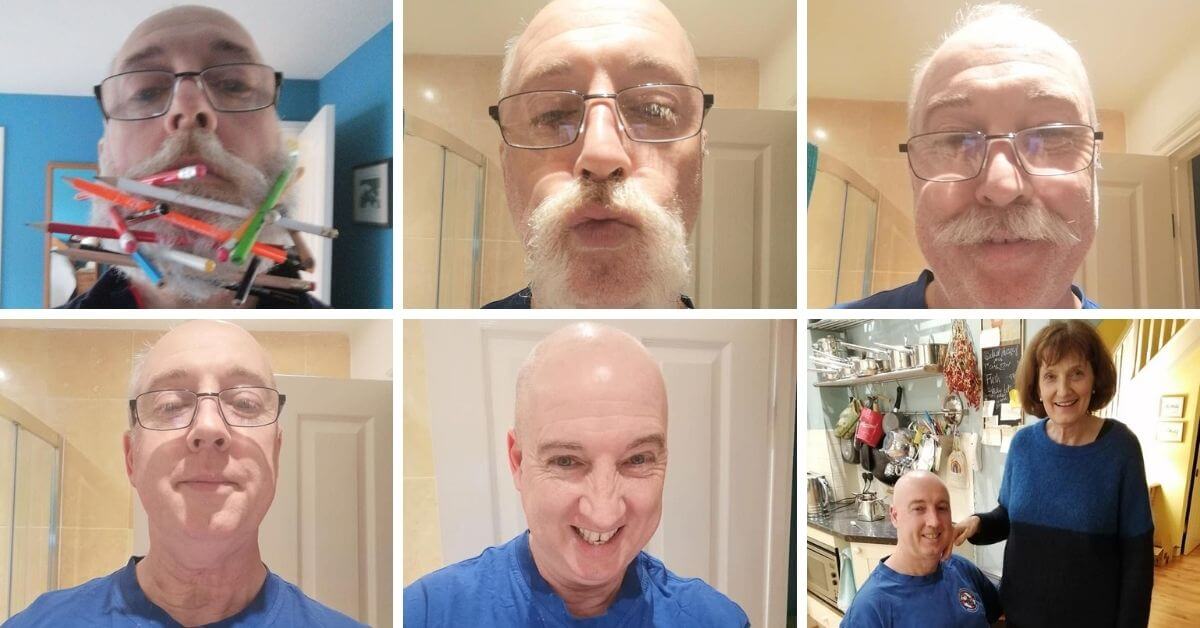 The couple, who live in Tiverton, Mid Devon, held the grand shave-off at their home at Moorhayes, which was filmed by 22-year-old daughter Hattie.

After making the first cut of the much-hated beard, Tracey handed the clippers to Stephen, who removed it in stages.

He said he was tempted to stop shaving when he was left with a moustache.

“I quite liked the moustache but if I had kept that divorce would have ensued,” said Stephen, a Devon Freewheelers Blood Bike volunteer for the Honiton-based charity since 2016. “I’ve got now what’s a happy family, now I have shaved it off.

He added: “I grow the beard to keep warm in the winter while I am blood biking because it can get a bit chilly up the front of your crash helmet in the icy weather. I am missing it a lot. It’s very chilly.

“But my wife absolutely hates it and I normally agree after Christmas – because I look like a poor-man’s Santa Claus – to get it shaved off professionally, but with lockdown that couldn’t happen.

“It will get grown back next winter. I am sure I will get cold in October and have it for a few weeks before Tracey notices it’s back.”

Tracey said: “The beard makes him look a lot older. I don’t like snuggling up to all that hair. It’s like kissing a hedgehog. I like to feel his lovely skin on his cheeks.”

She added: “All the people who have given that money have given it because they have sympathy with me and they support me.”

Each year Stephen and his beard turns into a human game of Kerplunk – his family pokes in pencils because of a challenge started by the couple’s 24-year trainee doctor son, Edward, when he sent his dad a photo of his own facial hair holding six.

“The rules are they have to hang there by themselves,” said Stephen. “The secret of many pencils is a curly beard. It gives good grip.”

He added: “I thought I would be quite safe, I would raise £80, I would get to keep my beard, the family could be persuaded to stop poking pencils into it and I could carry on staying warm on the bike.” 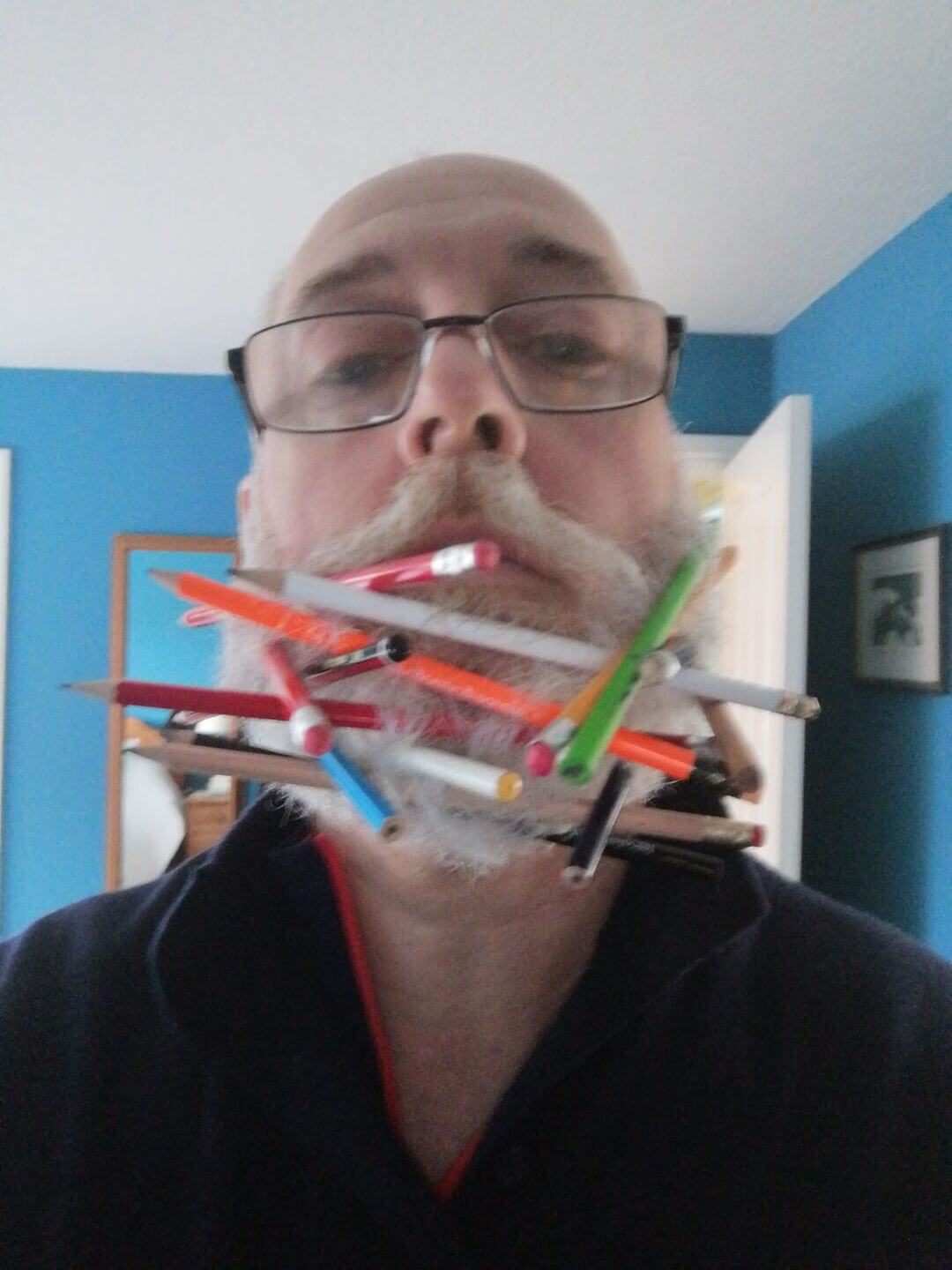 Stephen Nash and his ‘Kerplunk’ beard.
Photo: with permission. 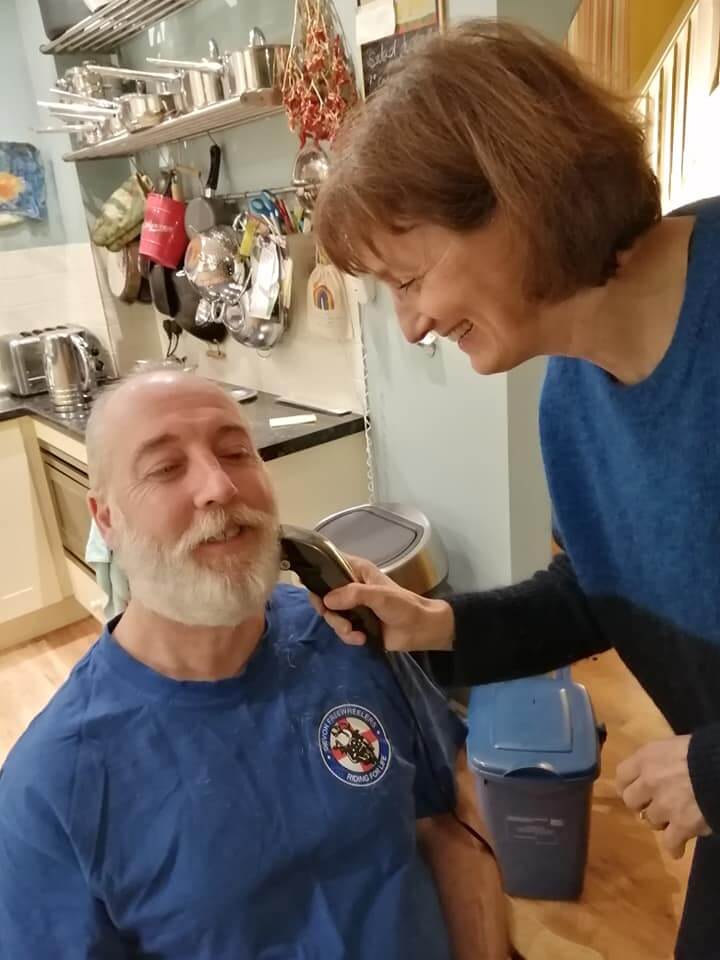 Tracey makes the first cut of the much-hated beard.
Photo: with permission. 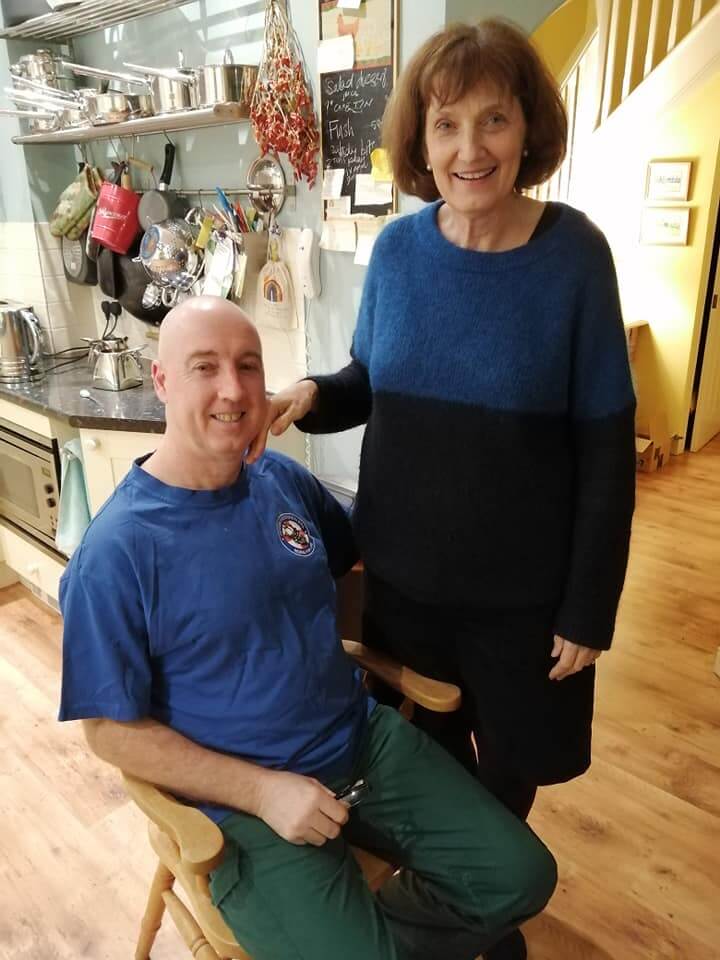 Stephen and Tracey Nash after the beard has been cut off.
Photo: with permission.