Tuesday, January 26
Trending
You are at:Home»News»Ottery St Mary»Plans for 150 homes and new school in Ottery St Mary are REJECTED

Controversial plans for 150 homes and a new primary school in Ottery St Mary have been rejected.

East Devon District Council’s (EDDC) Planning Committee went against the recommendation of its officers when it turned down the scheme for land at Thorne Farm, off Exeter Road.

They debated the proposals for nearly three hours.

Proposals would have seen flood-hit Tipton St John Primary School relocated from its village setting to the site on the town’s outskirts.

The outline application from Devon County Council (DCC) was for a 210-place new school on the western part of the plot, which lies opposite Barrack Farm.

A new roundabout and access point on Exeter Road and a through-road junction onto Cadhay Lane were also proposed.

But despite councillors agreeing that Tipton’s school needs to be relocated, they refused the plans by 11 votes to two due to the housing.

If there was no school there, this wouldn’t have even got validated. I am not prepared to drive coach and horse through the planning policy when weighing up the good, bad and the ugly – Cllr Philip Skinner 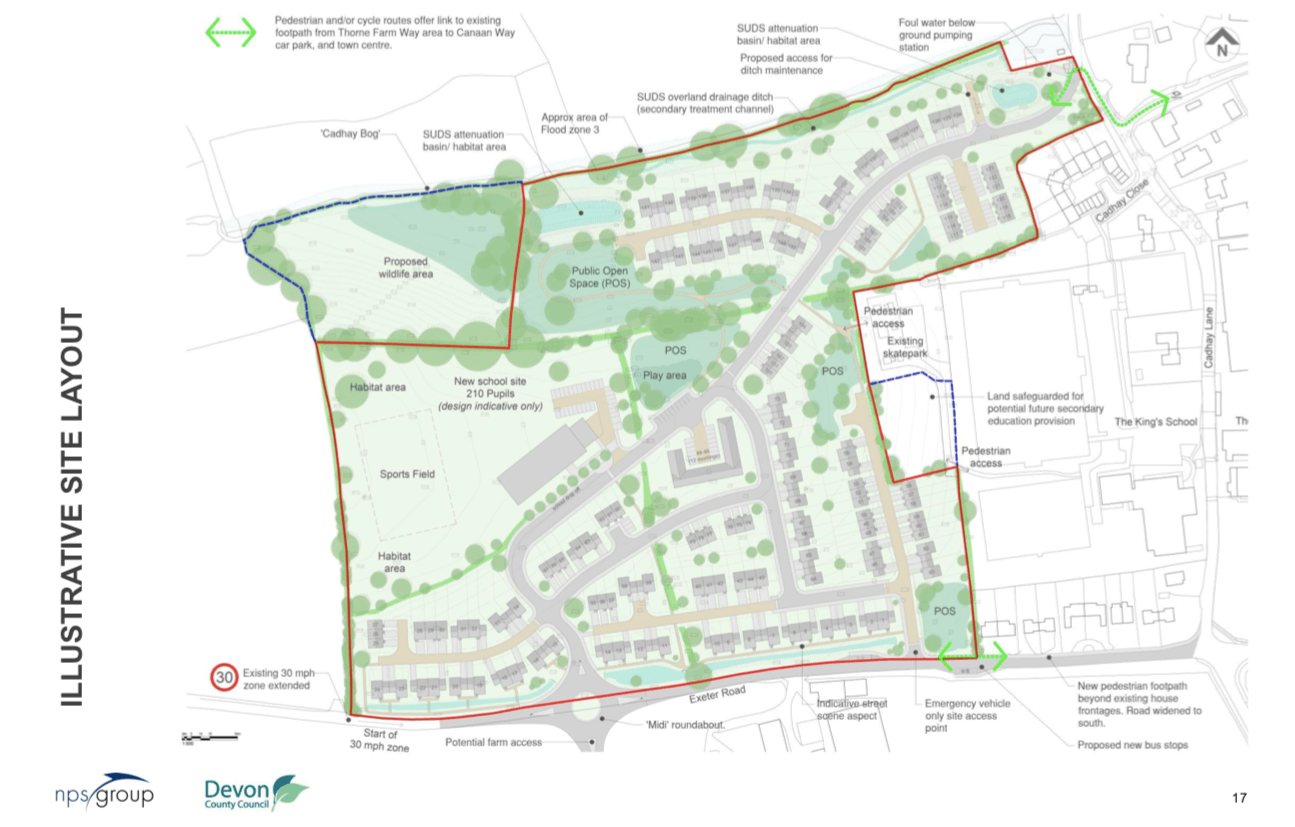 Members said the application ‘wouldn’t even have been validated’ had it not been for the educational element.

Tipton St John Primary School executive headteacher Colin Butler called for the plans to be given the go-ahead and said:  “It is not about if the school will flood again, but when.

“I do not want a child to be the first to die due to flooding at Tipton school.

“The school is wonderful and served the community for over 150 years, but the relocation is the only viable proposal, and without the move I fear for the long-term future of the school.”

Governor Jane Halse added: “The site and the buildings are too small and not fit-for-purpose.

“Remaining on the site remains a risk to life and the scepticism of the flood risk could encourage decisions that endanger the children.

“More children at the school live outside of the village and moving two miles to safety will meet the needs of the children as a whole.”

Opposing the scheme, resident Lewis Carr said there were ‘pages and pages of objections’ to the housing element.

He added that the lack of investment in the existing school had ‘sucked the life out of the community and this will rip out the heart’.

Councillor Claire Wright, who represents the Otter Valley ward on Devon County Council, said she had never felt so sad about the position she had to take – but called for the committee to refuse the scheme.

She added: “On paper, this breaches all the planning policies it shouldn’t.

“I hear the anger in the voice of the objectors and the sadness in the headteacher, but I cannot support as it is  contrary to the Local Plan, Neighbourhood Plan, and not the right solution for Ottery St Mary.” 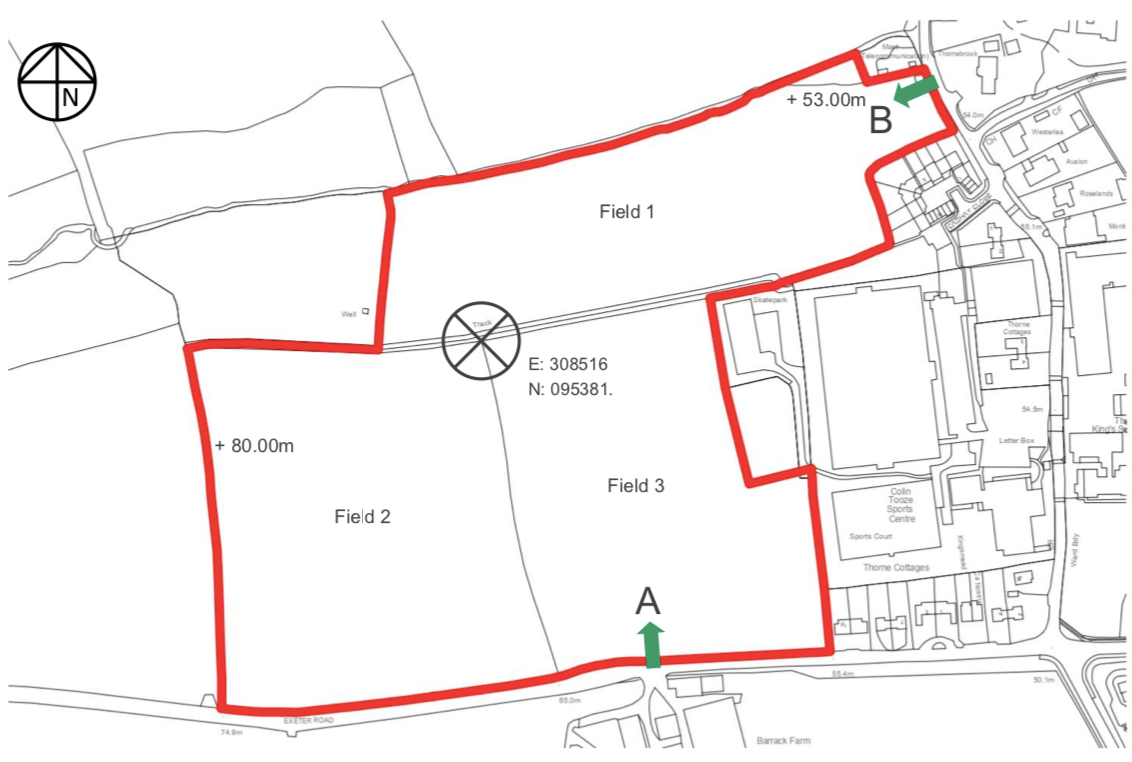 Ottery representative Cllr Vicky Johns said: “I object as it stomps all over the Local Plan and goes against everything in the Neighbourhood Plan and the Local Plan.

“We have adequate housing in Ottery and don’t have infrastructure for another 150 houses, regardless of what they are for.

“This is a planning application and we have to take out why the school has to be relocated.”

Fellow ward member Cllr Peter Faithfull said that the application was about new houses, not the relocation of the school, and would lead totraffic chaos.

Cllr Geoff Pratt, a committee member, called for the scheme to be refused and said: “The harm in the application is the provision of houses on agricultural land outside the built-up boundary, the visibility of the site, and the lower than policy requirement affordable housing.

“The only benefit is the replacement of the primary school.

“Cadhay lane is not suitable for 150 homes and a school. This is a breach of Local Plan and Neighbourhood Plan and it will end up with an urban sprawl.”

Cllr Philip Skinner added: “If there was no school there, this wouldn’t have even got validated. I am not prepared to drive coach and horse through the planning policy when weighing up the good, bad and the ugly.

“What is important to Tipton St John is that if the school could be relocated there, but in the right location.

“The land has not been put forward as it is suitable but because it is owned by Devon County Council and they need it to fund it.

“We just cannot put the policies to one side to fit this in and I am so apologetic to the school but I cannot support this.”

Cllr Geoff Pook said the scheme was ‘an application of financial convenience rather than good planning’. 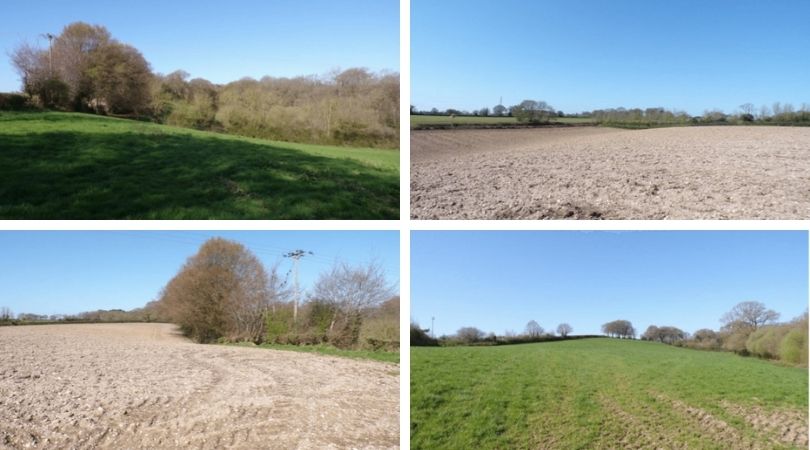 Cllr Mike Howe added: “We need to be realistic and I am most concerned about the kids in the school.

“Devon County Council has come up with an option to make the kids safe and secure and with the support of the school community, come up with a solution.

“Do I like it? Hell no, but we have to be realistic and realise what we are saying yes and no to.

“Where are the other options for relocation? This is the only one that has come forward and we need to think about what is best for the kids and the community around.”

A report to the Planning Committee said around £5.2million of funding needed to be found by DCC for the new school.

The authority, which owns the application site, would have netted all but £600,000 of its target through the scheme for 150 homes.

Other funding would then have beene used to make up the deficit.

The plans were refused on the grounds of the countryside location of the housing scheme.

Councillors said the mooted dwellings were proposed in an area not allocated for residential development and outside the built-up area boundary of the town.

They also cited the harmful visual impact and said the scheme did not provide the 50 per cent affordable housing required in policy.