A family of garden gnomes, a jeweller’s trunk of precious stones and a barrister cloak with wig are among some of the property left behind in Exeter’s Travelodge over the last year.

The hotel chain this week revealed a list of its lost property haul, handed in across its 563 UK sites over the last 12 months.

Shakila Ahmed, Travelodge spokeswoman, said with millions staying in the budget hotel over the year, staff often found a host of interesting things left behind.

She said: “This year’s audit for our Exeter Travelodge hotels includes a jeweller leaving behind a trunk filled with precious stones, a wedding coordinator leaving behind a seven-foot flower arch for a couple’s upcoming nuptials and a barrister’s cloak and wig.”

Some of the more unusual items listed as being left behind in the Exeter Travelodge include:

The hotel chain spokeswoman said there had been an increase in medical items left behind in 2020 across its UK sites. 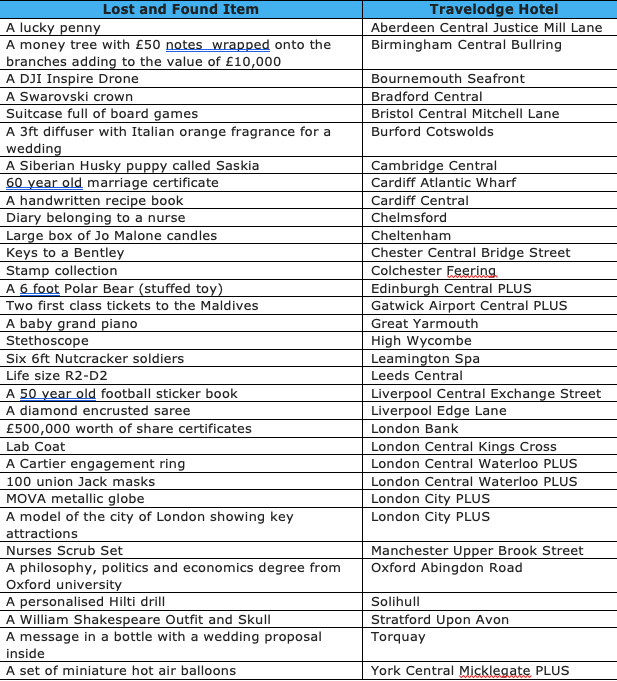 The unusual items left in Travelodge hotels around the country.

The hotel team at Chelmsford went the extra mile to reunite a nurse with a personal diary that documented her work amid the Covid-19 pandemic.

Ms Ahmed said: “Interestingly, as we kept some of our hotels open during both lockdowns to support local communities and provide accommodation for key workers, local authorities and for businesses that could travel for work, we have seen a rise in items being left behind by medical professionals.

“This includes a stethoscope, scrubs, Crocs and a nurse’s personal diary documenting their experience of working through the pandemic – plus lots of personalised face masks.”

She added: “When it comes to why so many of our customers forget their treasured items, it’s basically due to us all being time poor, juggling multiple tasks and being in a hurry to get from A-to-B.

“In the rush, valuable possessions are easily forgotten.”

Around the country the hotel chain’s lost property inventory included a wedding reception money tree totalling £10,000 in pinned-on £50 notes, left behind by a bride’s mum.

A three-feet high Italian diffuser bottle of bespoke fragrance imported from Florence, forgotten by a bridesmaid, was safely delivered to the wedding by the hotel manager before the bride noticed.

A groom sent a courier to collect his forgotten wedding gift to surprise his new wife – a six-feet tall toy polar bear.

Honeymoon first-class flight tickets to the Maldives were rushed to the airport by one hotel manager.

A framed wedding certificate left behind by a couple celebrating their 60th anniversary was reunited with the pair when they returned to the hotel.

Housekeeping found six life-size Nutcracker soldiers standing to attention in one hotel room, left behind by a wedding planner.

Other items forgotten by travellers over the last year included the keys to a new Bentley, a MOVA globe highlighting the customer’s international companies, and a stockbroker file containing £500,000 in share certificates.

A flight was missed when a CEO returned to pick up his lucky penny, carried around for 40 years, and a construction boss was ‘devasted’ to leave behind his personalised drill.