Friday, January 28
Trending
You are at:Home»News»Covid-19»East Devon and Exeter in Tier 2: MPs and council bosses react with ‘disappointment’ over Covid restrictions

MPs and council chiefs have reacted with disappointment that East Devon and Exeter will be placed into Tier 2 of Covid-19 restrictions when the national lockdown ends next week.

All of Devon will enter the ‘High Alert’ second-strictest set of rules from next Wednesday (December 2).

Health Secretary Matt Hancock said today (Thursday) that case rates in the county are 121 for every 100,000 people, but are higher in Exeter, Plymouth and Torbay.

Mr Hancock said there is pressure at the Royal Devon and Exeter Hospital (RD&E).

Reacting to the news, East Devon MP Simon Jupp said: “I’m very disappointed that Devon will be in Tier 2 (High) from next Wednesday with a review two weeks after.

“I remain concerned by the pressure at the RD&E and I am in touch with the chief executive.

“Pubs, restaurants and the hospitality sector must receive enough support to survive.”

Hospitality businesses selling food or drink for consumption on their premises are required to:

Exeter MP Ben Bradshaw said: “It is not surprising, but it will be extremely disappointing to many people, given Boris Johnson stupidly raised expectations of a greater relaxation.

“Devon’s figures are among the lowest in England, less than half the English average and falling.

“I hope this decision has not been skewed by the current pressure on our hospitals because of a lack of staff and resources.

“I shall be asking the Health Secretary these questions in a Zoom meeting with him this afternoon.

“The Government must also publish the basis on which these decisions have been made and clear criteria for moving up or down tiers.

“The last tier system failed, which is why we had to go into another month’s national lockdown.

“The worst thing would be for this to fail again so we end up back in lockdown, especially when vaccines are now on the horizon.

“I will want to examine the detail and hear what Mr Hancock has to say before deciding how to vote.

“The problem with these votes, however, is they are on a take it or leave it basis and if the proposals are rejected, there would be no restrictions at all, which would be disastrous.” 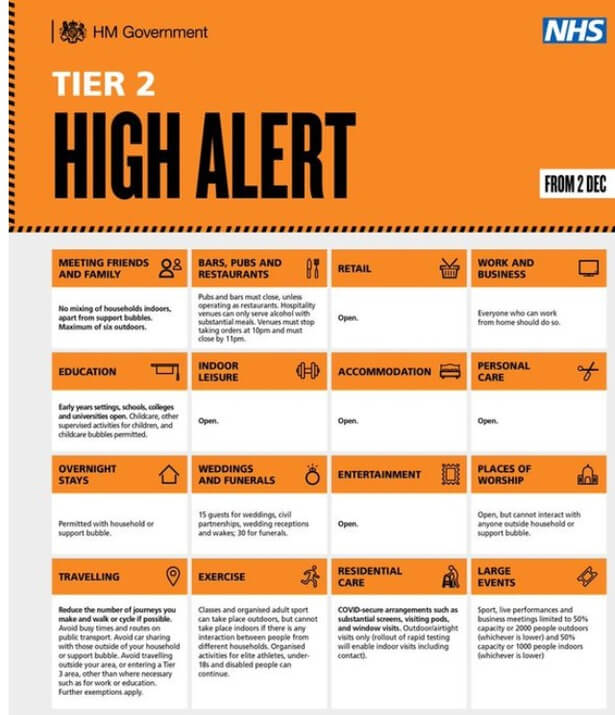 Neil Parish, MP for Tiverton and Honiton, added: “I am glad that retail can reopen in our area ahead of Christmas…and I am also glad our pubs serving meals and our restaurants can open, too.

“The package of measures is also welcome so people can go back to church, play sport and do a lot more than under lockdown.

“I think everyone will be keen to review the tiers regularly and see if we can move down into Tier 1.”

Up to 2,000 fans will be allowed inside St James Park and Sandy Park for Exeter City FC and Exeter Chiefs fixtures.

“The expectation of local people and businesses had been that we’d be out of lockdown on December 2 – but now this. We will do all we can to respond as fully and positively as possible.

“It must be said that it is deeply distressing for Devon to be marooned in Tier 2.

“Despite campaigners – including me – warning the Government for many years that to continually shrink our local hospital capacity was dangerous, we now find ourselves in Tier 2 mainly because of inadequate current and projected NHS capacity.

“Non-Conservative councillors have been begging and pleading on this topic for years through the DCC Health and Social Care Scrutiny Committee, but the Tories consistently refused requests to go into battle to prevent the loss of East Devon’s community hospital beds.

“Now, our poor local businesses and employees – indeed our entire local economy – will pay the price for the failure of those Tories at Devon county who were not prepared to put the blue rosette to one side and tell truth to power.”

Devon County Council leader Cllr John Hart said: “Devon has done well so far in keeping case numbers relatively low and I would like to thank everyone for their actions during the latest lockdown, so I’m disappointed that we have been placed in Tier 2.

“It’s even more vital now that we all stick to the guidelines and maintain social distance, wash our hands regularly and wear masks where required so we can get cases down and get into Tier 1.

“And working with MPs and Team Devon partners I will be strongly lobbying the Government to provide tailored support for our hard-hit hospitality industry, which is losing out significantly during what’s usually their most lucrative period.

“I’m pleased local shops will be able to re-open in the run-up to Christmas and begin to help our economy recover, but in Devon, hospitality businesses are crucial and they need targeted support.

“In the meantime, I would renew my appeal to people to stick to the rules to keep themselves and their families and neighbours safe and minimise the pressure on our local health services.

“I welcome the opening of the Nightingale Hospital in Exeter today but, as Boris Johnson has conceded, the South West still lacks hospital beds and this must be urgently addressed.”

Director of Public Health for Devon Steve Brown added: “Whilst the number of cases across Devon has stabilised, it is clear that the virus is still with us.

“Local cases were rising when previously in Tier 1 and it has only been through the additional restrictions and efforts of residents that we are now just starting to see a reduction in cases.

“The number of cases still out in our communities remains a real concern, particularly in the working age population and among older people – in workplaces, care homes and other settings where people come together.

“We must not let down our guard over the next few weeks, nor throw caution to the wind over the Christmas period.

“It would take little for the numbers to start to increase again and for our hospitals to be put under increased pressure, and none of us should want to pay the price for that in a few weeks’ time or in the New Year.”

Two Covid-related deaths recorded in East Devon, and one in Exeter, in latest weekly statistics