Tuesday, December 7
Trending
You are at:Home»News»Exmouth»Nine-year-old schoolgirl among Exmouth winners to scoop Pride of Devon awards

A nine-year-old schoolgirl is among the Exmouth winners who have scooped 2020 Pride of Devon awards, organised by Radio Exe.

The aim of the annual awards is to celebrate people who help their community and make a difference to the lives of others.

The 2020 Pride of Devon Awards will be streamed on the radio’s YouTube channel on Thursday, November 19, at 7pm.

“We wanted to honour some of the people who make a difference to lives of individuals as well as the broader community.”

Shannon Potter, aged nine, was named Child of Achievement, for caring for her disabled parents and fundraising for the Dream-A-Way charity.

The youngster was nominated by Dream-A-Way founder Jeff Merrett, in recognition of the time the youngster spends looking after her disabled mum and dad.

The judging panel was told: “Shannon is a nine-year-old girl who spends most of her time caring for her parents who have physical disabilities causing their mobility to be difficult.

“Somehow, she continues to support her mum and dad while raising funds for local charity Dream-A-Way.

“She has organised fashion shows and generated more than £800 by cutting her hair for the first time and thoughtfully donating it to the Little Princess Trust.

“She is the youngest person to receive a Voluntary Service badge from the Queen.” 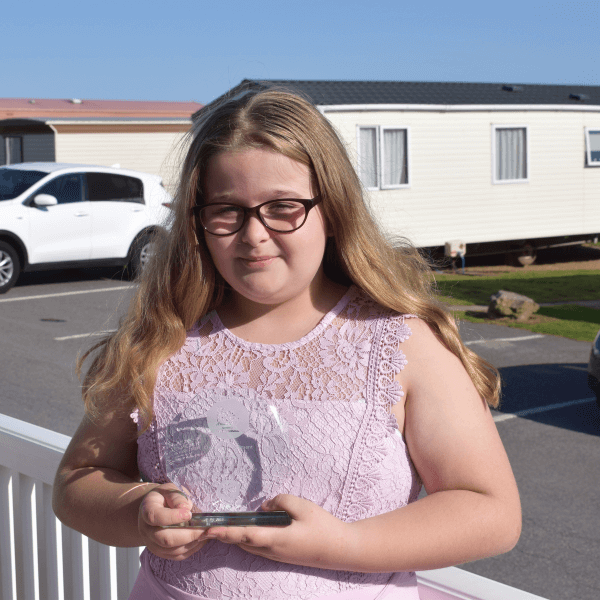 Kate Ponting, from Clinton Devon Estates, who nominated Patrick, calling him a ‘true countryside champion’, said he plays ‘a huge part’ in the Otter Valley Association, organising projects and practical conservation work including annual litter picks and removing the fast-spreading invasive and non-native Himalayan balsam from the Otter Valley.

The judges heard: “This year, despite restrictions on group sizes, Patrick’s efforts have not been diminished.

“He and a team of volunteers have still managed to win the fight against the invasive plant.

“His personal contribution and response to this alien invader locally would not be where it is today.

“The landscape and communities of the Lower Otter Valley are much indebted to Patrick’s tireless efforts.” 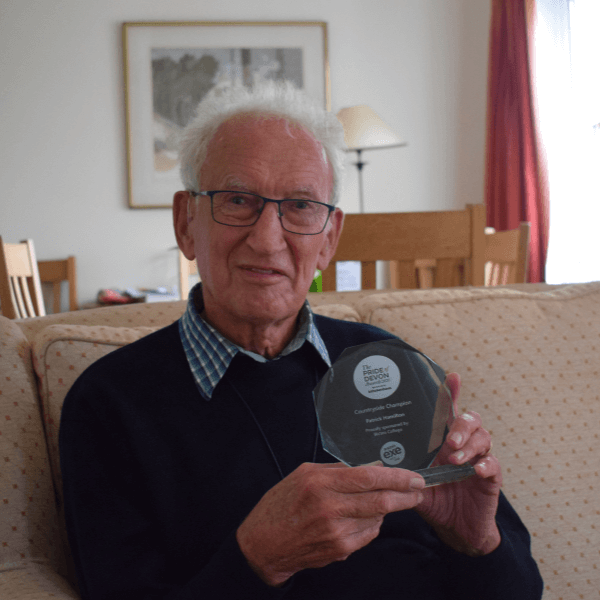 A decade of helping adults with learning disabilities has been recognised after Paul Baldwin was named Volunteer of the Year for his work with the Exmouth Gateway Club.

Paul, who was nominated by his wife and club co-founder Emma, works full time and dedicates his remaining hours to the charity.

The judges heard ‘Paul works full-time but gives many spare hours to the club most days and evenings – helping with the day-to-day running and sometimes stepping in as referee and washing the kits.

‘Paul has been doing this now for over ten years and his reward is to see the members happy, to help them develop and achieve new things and to encourage and support them. 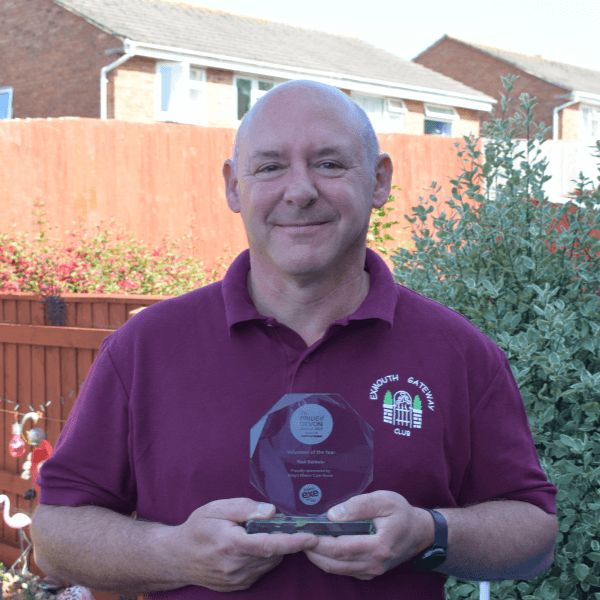 Paul Baldwin was named Volunteer of the Year for his work with the Exmouth Gateway Club.

Exmouth resident Helen Joscelyne has been named Neighbour of the Year for going ‘above and beyond’ four years ago when cancer targeted her neighbour’s family.

The judges heard how Helen, who four years ago was diagnosed with breast cancer, stepped in to help neighbour Shirley Beasley when her husband Alan was told he had terminal bowel cancer.

Before Alan died, Anne helped Shirley whenever she could, and continues to support her neighbour daily.

Shirley nominated Anne for the award, with judges agreeing Helen ‘has gone above and beyond for Shirley in many ways and is a true neighbour of the year.’ 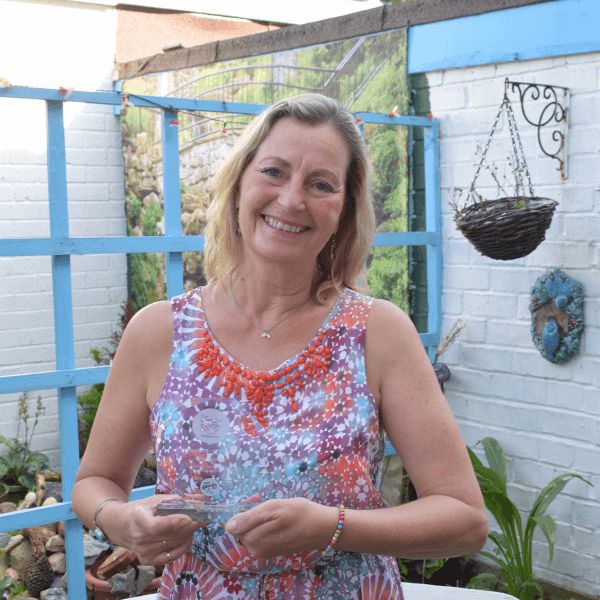 Exmouth resident Helen Joscelyne has been named Neighbour of the Year.

Claire Austin, who set up the Exmouth Friends in Need Facebook group, has won the Community Contribution award for her work supporting local families.

The judging panel heard how Claire ‘has built a community of care for families in poverty and need in the town, helping over twenty families a week.’

“It is now at the point where it’s become a formal voluntary organisation and Claire has had to give up her job to run it,” judges were told. 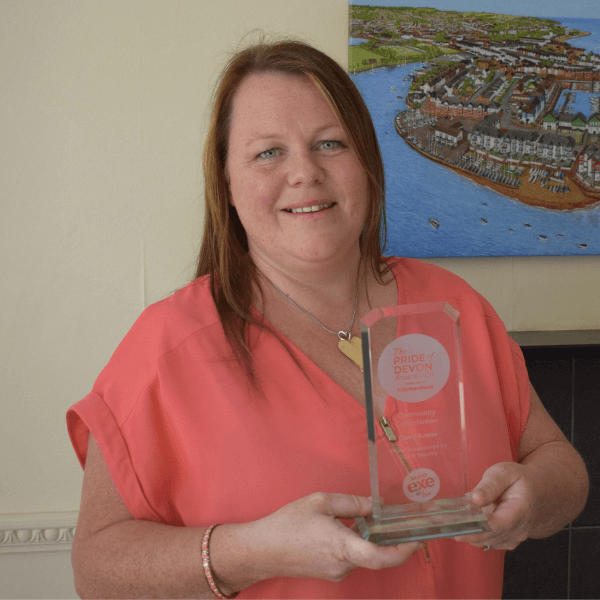 The Community Sport award has gone to Shelly and Neal Stammers from Tri Hards Exmouth.

The judging panel said it had received ‘several entries’ for the pair’s community fitness and wellbeing group for anyone of any age.

Nominations in favour of the married group founders said: “They give up their time freely to put on running, cycling, walking, and swimming courses that have helped locals get fitter and improved their mental health.

“The group has made many friendships and raised a lot of money for several local and national charities.” 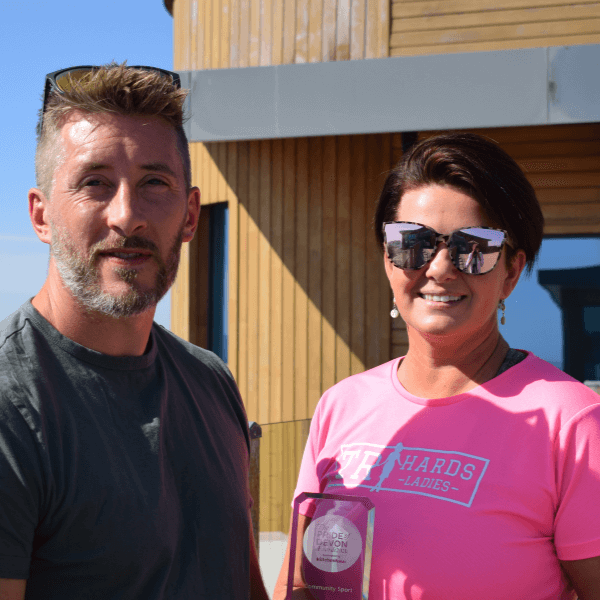 The Community Sport award has gone to Shelly and Neal Stammers from Tri Hards Exmouth.

Nigel Dilly, awards sponsor spokesman, said it was ‘great’ to celebrate and recognise the people who help us.

He said: “It reminds you of all of the good people who live amongst us not necessary the bad ones.

“You don’t normally hear about all the good things that most people are doing who lead normal lives.”