Thursday, August 18
Trending
You are at:Home»News»Exeter»Weekly stats show 379 new Covid cases in Exeter – with ‘clusters’ in EVERY part of city

Weekly government figures show 379 new coronavirus cases have been confirmed in Exeter – with ‘clusters’ identified in every area of the city.

Public health chiefs have called for extra vigilance after infections among students dropped, but increased in the wider community.

The city’s infection rate of 1,097.4 per 100,000 people is currently marginally above the national average.

There were 1,133 new cases across both Devon and Cornwall.

Six-hundred-and-three new cases had been confirmed across Exeter in the previous seven days.

However, around half of these were backdated to a widely-reported national database glitch.

‘Clusters’ have been identified in all 15 areas of Exeter in:

The ‘clusters’ data, last updated yesterday afternoon (Friday, October 16), is based on a rolling rate of new cases by specimen date ending on October 11. 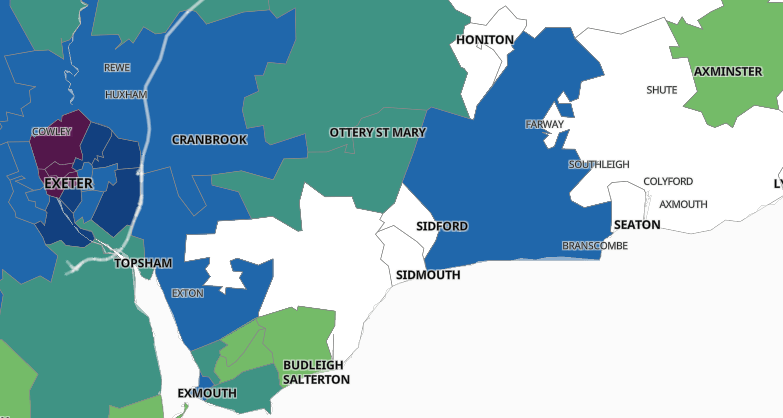 The Government’s online map showing the ‘clusters’ of coronavirus cases in East Devon.

Reduction in student cases but rise in wider community

Devon’s director of public health Dr Virginia Pearson said: “The pattern in Exeter has shown a successful reduction in student cases with no sign of significant spread thanks to the swift actions of the university and other partners in working together to contain the situation. But we must not be complacent.

“We are now seeing more community cases in Exeter and across Devon, in line with the rise in the rest of the country, particularly in the working-age population, and we expect cases to increase over the next few weeks.

“These cases cannot be linked to university students and the coronavirus appears to be passing between people outside of Covid-secure settings, which suggests that community spread is now occurring.

“Obviously, we want to limit the impact on people in older age groups and on to those who are particularly vulnerable so the time to act is now.

“Everyone – and particularly those people of working age – must be extra vigilant about maintaining social distancing, handwashing, wearing face coverings and avoiding social mixing if they can.”

Some 943 new cases of coronavirus have been across Devon in the past week.

Two-hundred-and-eighteen of these were in Exeter and 50 in East Devon.

Eight-two of Cornwall’s cases has specimen dates in the past week.

The number of people in hospital in the South West in the past week has risen to 151 from 77 and there are currently 17 people on a mechanical ventilator.

How the figures compare to the previous week

Of the 1,369 Covid cases confirmed across Devon and Cornwall in the week before last, 745 had a specimen date between October 2 and 8.

The total in Cornwall and the Isles of Scilly is 1,804 cases.