A judge has jailed a murderer for at least 22 years for killing a Newton Poppleford loner who he claimed sexually abused him since childhood.

Lewis Finch, aged 31, beat and strangled 47-year-old Geoffrey Pearce in the early hours of January 9, 2020, torching his caravan with the dead man inside to destroy the evidence.

Finch, of of Briseham Close, Brixham, formerly of Exmouth, was jailed for life at Plymouth Crown Court on Wednesday (October 14).

Finch had been found guilty of murder last week by an Exeter Crown Court jury following an eight-day trial.

Judge Peter Johnson warned him he would serve 22 years before being eligible for parole for the revenge killing of the scrapyard loner who had a ‘heart of gold’.

Judge Johnson said: “I make it clear a life sentence means just that.”

When passing sentence ,Judge Johnson accepted Finch’s claims Mr Pearce had abused him since the age of 13.

The judge dismissed Finch’s tale he lost control and flew into a rage because he woke to hear Mr Pearce playing with himself while lying on a mattress next to him.

Judge Johnson said: “You told lie after lie to the police and the jury. The account you gave them was a carefully-contrived construction of lies designed to minimise the price you would have to pay for this dreadful deed.

“Mr Pearce was a man with poor social skills who was ill-suited to normal living and preferred the company of young males.

“I bear in mind he is not able to deal with the allegations you made against him.

“His family described him as no saint but said he had a heart of gold and is greatly missed.

“I am satisfied he abused you, but to what degree is unclear. I find this is what led to his death.”

Fuelled on booze, cocaine and dog morphine, Finch smashed Mr Pearce over the head at least three times, with a hammer or pick-axe handle, fracturing his skull.

Leaving his victim unconscious on the floor of his Newton Poppleford caravan, he went outside to a nearby barn for a plastic cable-tie to throttle Mr Pearce – zipping it so tightly he fractured the man’s larynx.

The judge said that during Finch’s ‘dreadful deed’ he made ‘chilling’ phone calls to his sister, Ronni Smith. In between battering and strangling Mr Pearce, Finch twice called to ask her for lifts to Exmouth.

“You had already assaulted him when you made that chilling call to your sister,” said Judge Johnson.

“The pathologist’s evidence was that he survived at least 30 minutes.

“You told Ronni what you were doing and what the outcome would be.

“You told your sister that he was not dead yet but was going to be dead.

“She pleaded with you to call an ambulance but you wanted a lift so you could get away and avoid detection.

“You got a cable tie from the barn and went back to the caravan where you delivered further heavy blows to the head and used the cable-tie on his neck.

“He pleaded for you to spare his life but you killed him by a combination of the heavy blows to the head and the cable-tie. One small mercy is that he was dead before the fire took hold.

“On one view, you took a weapon to the scene in the sense that you took the cable tie from the barn. That is an aggravating feature. This was not spontaneous violence by any means.

“There was a significant degree of pre-meditation and you caused physical and mental suffering before Mr Pearce’s death.

“He sustained a serious injury at least 30 minutes before he died and was begging for you to spare him.”

The judge praised Finch’s sister Ronni Smith for her ‘right and proper conduct’ in trying to save Mr Pearce; calling the emergency services to the Newton Poppleford scrapyard after her brother alerted her to the brutal attack.

His killer had an ‘extremely unsatisfactory’ upbringing and knew Mr Pearce from a young age when he supplied Finch’s addict mother with drugs.

Drug addict Finch, who denied murder but admitted the manslaughter of Mr Pearce, claimed the victim had sexually abused him since the age of around 13.

Finch said he suffered from post-traumatic stress disorder as a result of the abuse, and his responsibility was diminished when he attacked.

The judge said he rejected Finch’s story and said that he intended to murder Mr Pearce after arriving at the Newton Poppleford scrapyard in the early hours of January 9 this year.

He said Finch ‘became animated’ days before the attack, when Mr Pearce found out where his girlfriend lived, turning up outside her home in Exmouth.

Judge Johnson said he was satisfied Finch had not arrived at the scrapyard with any weapons, but refused claims of a spontaneous killing.

The judge rejected that Finch took the cable-tie from Mr Pearce’s hand, saying he walked 50 yards to the barn to find the make-shift noose and a blunt object with a ‘degree of premeditation’ to kill.

Finch murdered the man he claimed was his ‘friend and role model’ in the early hours of the morning, arriving at the victim’s scrapyard home in a taxi.

Finch said he lost control and struck out, hitting him with a pick-axe handle then strangling him after he shouted ‘weird-ophile’ instead of ‘paedophile’ and Mr Pearce started laughing at him.

After torching the dead man’s caravan with his body still inside, Finch set off on an eight-mile walk to Exmouth to his friend’s house in Cheshire Road.

There, he asked to wash his blood-stained clothes, saying he killed Mr Pearce because he was a ‘nonce’. 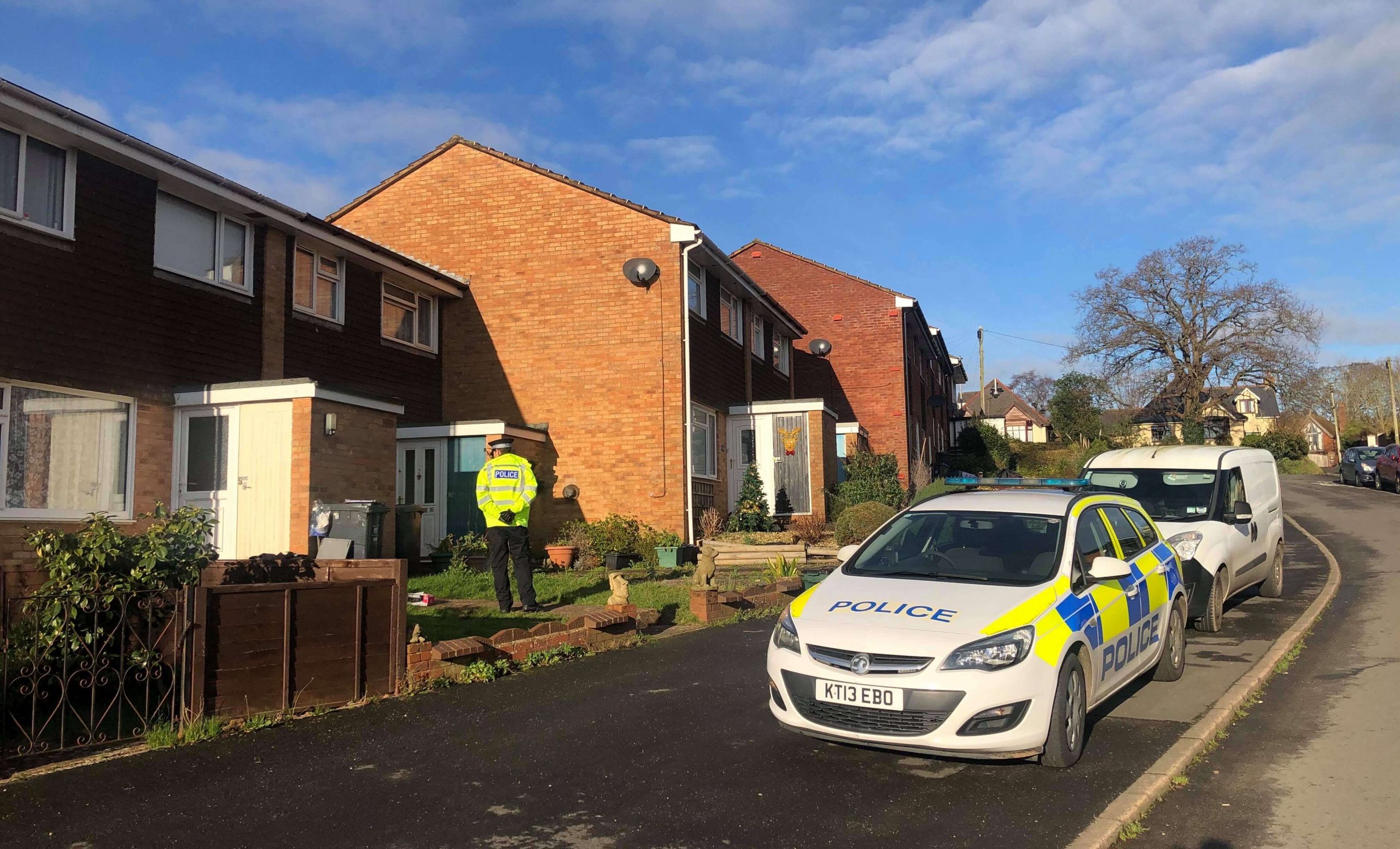 Police and forensic officers searched a property in Cheshire Road, Exmouth, after Lewis Finch fled there after he murdered Geoffrey Pearce. 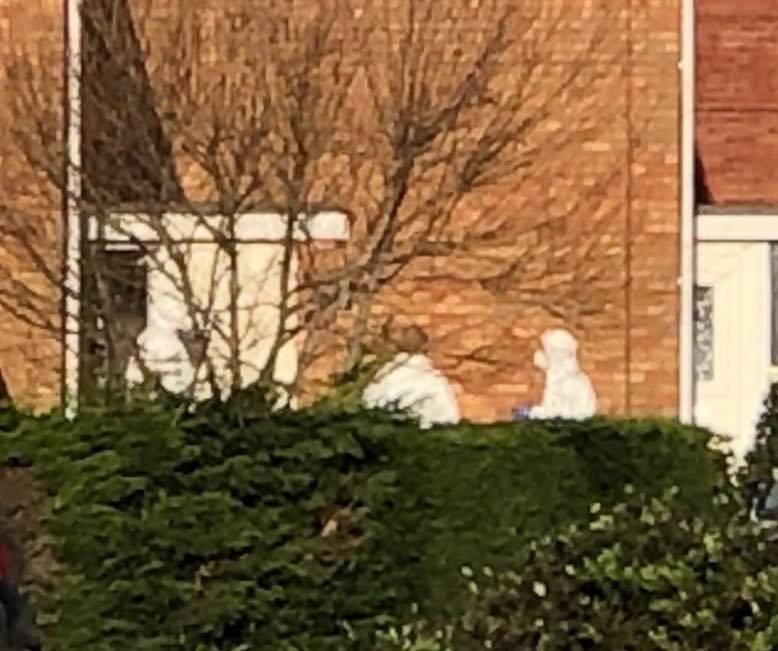 On his arrest the following day, Finch told police ‘I’ve done you a favour, I’ve killed a paedophile’.

Mr Adam Vaitalingam, QC, defending, asked the judge to take into account Finch’s history of childhood abuse, saying it was relative to the killing.

He said Finch had not planned to kill and had not taken any weapons with him to the yard on the night Mr Pearce died.

Mr Vaitalingam said the killing was the result of ‘a very specific relationship dynamic based on sexual abuse’.

He added: “This was not a random killing of someone who was not known to him, which may suggest Finch poses a danger to anyone.”

Judge Johnson offered the court’s condolences to Mr Pearce’s family, praising their dignity and conduct during the eight-day hearing of ‘harrowing evidence’.

Lewis Finch, 31, found guilty of murdering ‘friend and role model’ at Newton Poppleford scrapyard, is warned he faces a life-sentence