Friday, September 17
Trending
You are at:Home»News»Budleigh Salterton»Budleigh community is key to workshop success as volunteer drive is announced

Open day plans to recruit volunteers are being made in Budleigh Salterton now the keys from the sale of the former fire station have been handed to the town.

Budleigh Community Workshop Trust (BCWT) is celebrating becoming the ‘proud custodian’ of the decommissioned Station Road fire station after the town rallied round to buy the building.

The next step is to recruit volunteers to help refurbish the building to create the activity workshop space for the community.

Budleigh Community Workshop Trust plans to turn the building into a town asset where people can share and learn new skills, and make friends.

Bill McDermott, BCWT chairman, said the process of refurbishment could begin now the transfer of the building was complete.

He said: “This will require considerable work to make the facility fit for our concept of a space for practical and creative activities for the whole community.

“We hope to have an open day later in the year, when conditions allow, to showcase our plans, recruit volunteers and, also, to discover the hidden skills and talents that exist locally.

“We hope to involve as many as possible in the creation and development of the community workshop.”

Celebrations were held at the beginning of September when it was announced Budleigh Community Workshop Trust won the sealed-bid sale of the town’s former fire station.

The town raised £50,000 in 27 days to add to £150,000 in donations and pledges, giving the charity group a ‘significant fighting fund’ to be able to bid for the building at auction.

But when Devon and Somerset Fire and Rescue Service suddenly pulled the building from auction days before the sale, and invited sealed bids to ‘achieve best value’, BCWT was left with days to find sufficient funds – much of the money raised was crowdfunded, and not due for release by online operators in time for the new cut-off date. 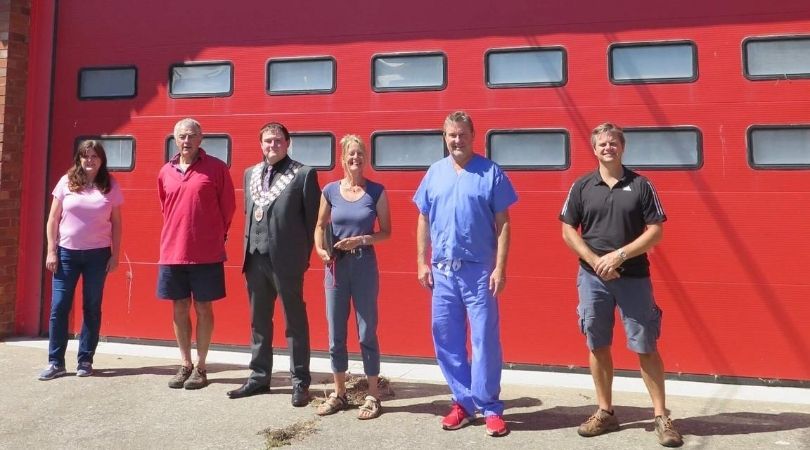 Mr McDermott said the ‘phenomenal response’ by the community, ended in an ‘emotional moment’ when Budleigh Community Workshop Trust won the sealed bid.

Devon and Somerset Fire and Rescue Service said in July 2020 auctioning the property would enable ‘a transparent, certain and fair route to sale’.

The two-storey fire base permanently closed at the start of April 2020 as part of Devon and Somerset Fire and Rescue Service’s cost cutting consultation, Safer Together.