Wednesday, June 29
Trending
You are at:Home»Sport»Table-topping Ottery St Mary AFC overcome Totnes & Dartington 3-0 as keeper O’Callaghan picks up player-of-the-month award
Ottery St Mary AFC goalkeeper Jacob O’Callaghan celebrated picking up the club’s September Player of the Month award with a second successive clean sheet in his table-topping side’s 3-0 win at Totnes and Dartington.
Second-half goals from Charlie Cox, Liam Carey and Lorin Newcombe helped the Otters to a seventh win in in eight Scott Richards Solicitors Devon League South and West games.
They now head the table by four points from Buckland Athletic Reserves.
The game was played out in severe weather conditions, but Ottery started well and fashioned good opportunities in a goalless bit end-to-end first-half.
However, the in-form strike duo of Liam Carey and Pete Grover were both guilty of missing good chances while, at the other end, the home side saw Ottery glovesman O’Callaghan make two excellent saves.
When he was beaten, the frame of his goal came to his rescue.
Ottery ended the first-half on the front foot, but the interval arrived with the game still without a goal.
In the second-half, more Ottery chances came – and went – with Carey, Grover, Dan Gill and Luka Nickles all going close, but each was thwarted by the impressive home custodian.
The deadlock was finally broken when Ben Lawrence delivered a fine cross that saw Charlie Cox head beyond the ‘keeper.
It was soon 2-0 with Grover providing the assist for striker partner Carey to net.
The third and final goal was set up by player-boss Billy Rouse, who joined the action from the bench and provided the cross that was spilled by the home goalkeeper giving Lorin Newcombe the simplest of chances to tap home. 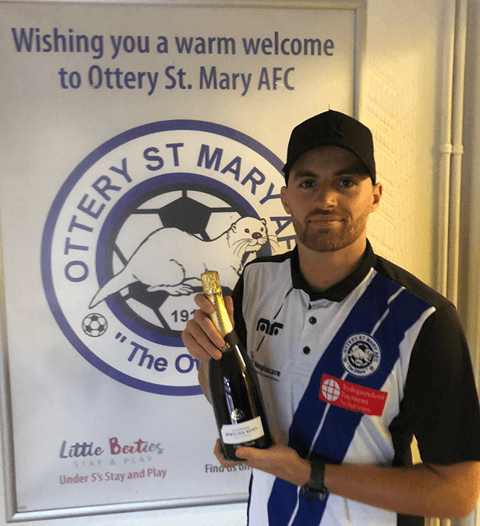