It started from Budleigh Salterton in the Lime Kiln car park with Ross and his brother Guy setting off just before 8.30am.

The lads made very good time for the first 20km to Harpford, averaging a 10min/mile pace.

Navigation wasn’t an issue as Ross had done a full reconnaissance of the entire published route (including a couple of short ‘revisions’) prior to the race.

They passed several of the 8 Trigs walkers on the climb out of Budleigh and eventually caught the leading pair on Woodbury Common whilst they were struggling to locate Woodbury trig point.

The brothers ran all the way to Harpford holding the relentless pace.

Here they had to part ways as Guy was running the 5 Trigs version.

This is where things started getting tough for Ross both physically and mentally.

The thought that he effectively had the 4 Trigs race route ahead of him, plus the path up High Peak and onto Budleigh was daunting.

Ross held the pace until Sidbury before admitting defeat on the climb up to Buckton Trig which he walked up.

Ross found eating difficult due to a lack of appetite and saliva to help digest his sandwiches, so he was very relieved to be the first runner to arrive at CP2 in the Weston car park where he refilled with electrolytes and took some painkillers.

The pain and cramps were now subsiding and the race appeared to be back on.

Weston trig marked the start of the homeward-bound stretch, but the climbs would be tough. 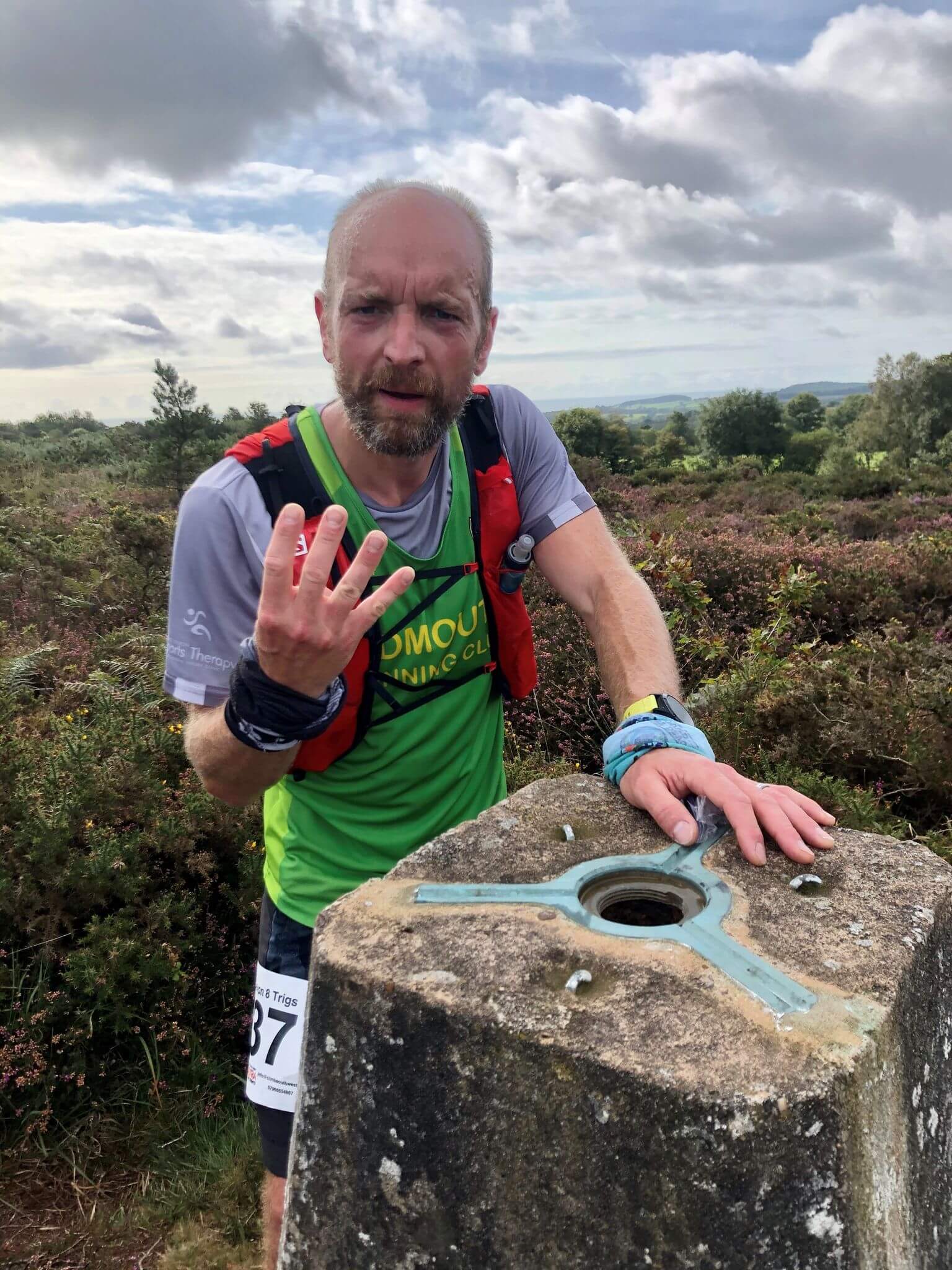 So, not wishing to burn out, he took the decision to divert inland slightly to Salcombe Regis to avoid the muscle busting steps up to Frog Rock (a normal decision of any local runner), before dropping down Salcombe Hill into Sidmouth.

He purchased a ‘calippo’ from the ice cream kiosk outside Dukes on the seafront.

This helped with overcoming the long climb up Peak Hill, but not as much as seeing his wife Polly and two lads cheering him on his way up.

Summiting Peak Hill was a significant mental milestone for him, knowing he only had the ridiculously, short, sharp climb up-to the High Peak trig to contend with meant the finish line was not far.

The last leg from Ladram was peppered with the usual SW Coastal Path tourists, some of which were not best pleased to see something resembling the beginning of a zombie apocalypse heading towards them.

It wasn’t long before the finish line from east of the Otter was tantalisingly close and in view.

However, there was the short section around the mouth of the River Otter.

Having just passed the 50km in a time of under the six-hour mark (5:55) Ross was boosted sufficiently to push on.

He crossed the finish line in just over six hours (6:10) to finish third out of the 35 runners.

Ross was welcomed home by his brother and Antony Hall, marking the end to a great, if not very challenging 52km/4800ft race around a breathtakingly beautiful part of East Devon.