Friday, August 19
Trending
You are at:Home»News»Ottery St Mary»Funding boost for £80,000 Samuel Taylor Coleridge statue bid in Ottery St Mary that would be a world-first

The mooted bronze sculpture of the East Devon town’s most famous son, sited outside St Mary’s Church, would be a world-first.

This is not just celebrating history, but making history as the statue, the church and the town will outlive us…

Coleridge Memorial Trust has already secured planning permission for the memorial – but £50,000 was needed for the first phase of work.

The scheme was awarded £5,160 by East Devon District Council’s (EDDC) Community Grants Panel at its September meeting to help the group meet a £20,000 crowdfunding target.

Mike Ferguson, of the trust, said: “This is not just celebrating history, but making history as the statue, the church and the town will outlive us, and this is the final jigsaw piece of the memorial to him.”

Supporting the project, Councillor Paul Millar said: “It is not very popular to erect statues these days, but Coleridge campaigned against the slave trade, as well as being an important poet.”

Cllr Helen Parr added: “This is a very worthy project and I think, as they have gone a good way to raise the funding they want, we should support them.” 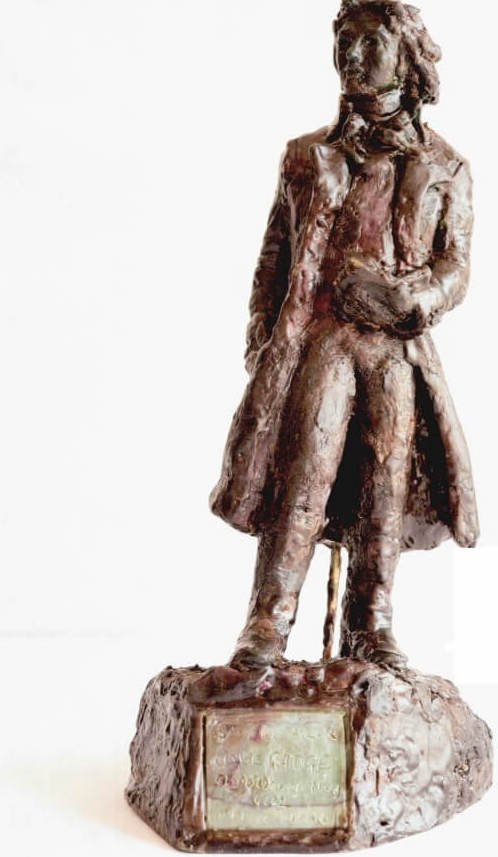 What the Ottery Samuel Taylor Coleridge statue church could look like. Image from the planning application.

While the overall cost of the statue is estimated to be £80,000, campaigners say that hitting their £50,000 target leaves them in a better position to reassess and potentially reduce the price.

The trust said it has already been promised some of the £30,000 shortfall.

Kubla Khan and Rime of the Ancient Mariner scribe was born in 1772 in the School House in Ottery.

His father John was the vicar of the parish and master of the King’s Grammar School.

The statue, on a granite plinth made out of Devon stone, would be sited on the south side of the church as the poet spent his youth in the grounds.

Plans for the memorial, given the go-ahead last year, stated: “There has long been a wish in Ottery St Mary that the poet should be appropriately memorialised in sculptural form close to his birthplace.

“There is an unquantifiable benefit to the town as a whole if the church, which is already a draw for visitors, is ornamented with an additional level of interest in its association with the poet Coleridge.

“Tourism is a significant factor in Ottery’s local economy and anything that bolsters this effort is of great value.”

Nicholas Dimbleby has been chosen as the sculptor for the project and it is hoped the statue can be unveiled before 250th anniversary of Coleridge’s birth in 2022.

Supporting the fundraising campaign, internationally-acclaimed writer Dame Hilary Mantel said: “He was a visionary who helped shape our national imagination, and it is right that he should have a memorial in the place that shaped him – and in the very churchyard where he told the secrets of his heart to the grass and the nettles.”

Former Poet Laureate Sir Andrew Motion added: “There is no memorial statue of Coleridge anywhere in the world to recognise and honour his shaping of our modern view of the world through his literary and philosophical contributions.

“It seems completely astonishing that such a thing doesn’t exist already.

“Coleridge is one of the greatest poets and thinkers who ever lived, as well as being one of the most fascinating human beings, and Ottery St Mary should honour and celebrate him.”