Thursday, October 1
Trending
You are at:Home»News»Budleigh Salterton»Budleigh fire station auction aborted for sealed bids that close TODAY in less than an hour

You have under one hour to help save Budleigh Salterton’s former fire station for the town – an auction to sell the building has been aborted in favour of sealed bids which end at 5pm today (Wednesday, September 2).

A charity group who successfully raised funds to bid at auction for Budleigh’s former fire station has hit out at the fire service’s ‘cruel’ moving of goal posts.

The Budleigh Community Workshop Trust (BCWT) successfully raised £50,000 during August to add to more than £150,000 in donations and pledges to be in ‘a strong position’ to buy the decommissioned Station Road fire station for the community.

The charity group was due to bid for the Budleigh building on September 10, but on Friday, August 28, the auction was aborted in favour of sealed bids that close today at 5pm, Wednesday, September 2.

It’s cruel. We would rather have an auction and have the open competition and see what it’s costing us…

The BCWT charity said the changes have ‘come as a blow’ to the town, because some funds raised for the auction will not be available in time for the closed bid deadline.

The group said it hopes Devon and Somerset Fire and Rescue Service, the freeholders and sellers, will ‘look favourably on the community bid, understanding how much it would mean to so many people’.

Now the BCWT’s only hope of securing the former fire station is to hope it submits the highest bid before 5pm today, September, 2.

Bill McDermott, BCWT chairman, said he feared the town would not have sufficient funds available by the deadline to win the sale.

The £50,000 raised by the town from a successful August crowdfunder will not be fully available in time for the bid deadline, and other community fundraising efforts are still being counted.

Mr McDermott said: “It’s cruel. We would rather have an auction and have the open competition and see what it’s costing us.”

He added: “The crowdfunder site has been particularly fantastic in meeting its target of £50,000 in twenty-seven days, with a little help from East Devon District Council, who topped up the last £5000 to get the charity over the line.

“The auction has now been aborted in favour of a sealed bid offer, that closes on Wednesday (September 2) and the highest bid will win.

“This has come as a blow to the trust as they thought they had until next week to get all the funds together but hope they can still make an acceptable offer.

“Hopefully the Devon and Somerset Fire and Rescue Service, the freeholders and sellers, will look favourably on the community bid, understanding how much it would mean to so many people.

“We have been overwhelmed by the generosity of the public in getting behind the crowdfunding campaign and also in their enormous enthusiasm for a workshop in the community for the community.

“The public have dug deep and come up trumps.

“We now hope we are able to succeed in our bid to retain the fire station in the community.”

The town’s fire station was closed earlier in 2020 by Devon and Somerset Fire and Rescue Service, as part of its cost-cutting Safer Together consultation.

The fire service instructed the sale of the building through an online auction on September 10.

Devon and Somerset Fire and Rescue Service has been approached for a comment.

Last month East Devon MP Simon Jupp said gave his support to the workshop project, saying it would ‘be a big boost for the town’ , calling it a ‘brilliant opportunity’ in helping to bring people together to improve their skills and confidence. 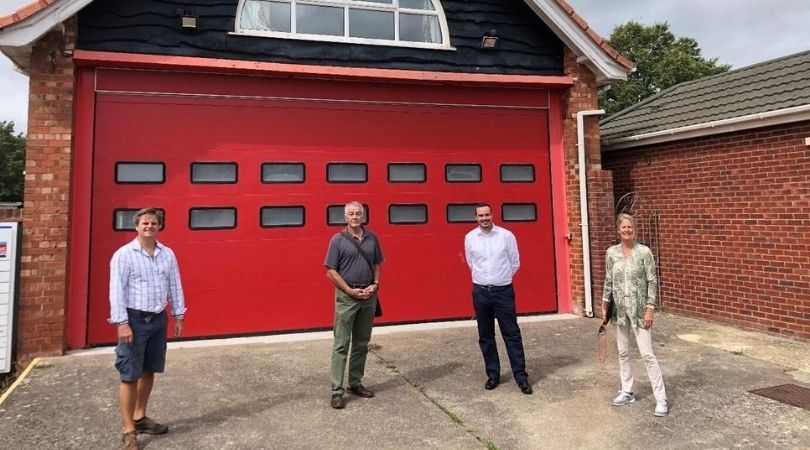 A sealed bid is a form of auction often used when there is significant interest in a property and offers the chance for sellers to reap more money.

The seller chooses the best bid. It it may not be the highest amount, but can be based on aspects such as if the bidder is a cash buyer and how quickly the sale can complete.

Race is on to raise £23,000 in seven days if Budleigh is to bid at auction to buy former fire station and turn it into town’s community workshop