Friday, September 17
Trending
You are at:Home»News»Exmouth»Overhaul of CCTV in Exmouth to combat anti-social behaviour starts with number-plate recognition trial on seafront

Number plate recognition CCTV is being trialled on Exmouth seafront as part of a camera overhaul to tackle anti-social driving and behaviour.

The town’s current CCTV system is under review and options for new security in Exmouth include forming a police-backed hub that would monitor several towns in East Devon.

Exmouth’s trial of automatic number plate recognition (ANPR) technology on the seafront, opposite Alexandra Terrace, is one of a number of CCTV developments operating in the town.

The trial camera is in addition to CCTV equipment opposite Exmouth Lifeboat station, which has number plate recognition and night vision.

And a town council mobile CCTV camera has been positioned at the top of the Zig Zag footpath, near Orcombe Point.

Although the ANPR camera information cannot currently be stored on a data base, Exmouth police can access as-it-happens footage, or view the recordings if an offence has been committed.

Sergeant Richard Stonecliffe, neighbourhood team leader for Exmouth and Ottery St Mary, said: “The current CCTV scheme that covers the town centre is under review and the town council are looking at options for a completely new system.

“The current one is monitored by police volunteers but is administered by East Devon District Council.

“The new scheme has the support of the Office of the Police and Crime Commissioner and several options are being considered including the creation of a CCTV hub that could include other towns in the East Devon area.”

He added: “East Devon District Council have placed a new camera opposite the lifeboat station.

“The camera does not link to an ANPR database. However, the camera will record the registration numbers of vehicles as they pass.

“Funding for that camera came from the East Devon Community Safety Partnership which has been made available to them from the OPCC’s budget for seasonal demand.

“At this time because neither of the ANPR cameras are linked to a database, the police will only be able to access the footage for offences that have been committed – looking for a suspect vehicle after the report of an incident or to view the footage in live time.

“The two cameras cover a significant proportion of the seafront area and it is hoped they will help prevent anti-social driving as well as general anti-social behaviour.”

Exmouth Town Council said it is looking at a spend of around £100,000 – part-funded by the Office of the Police and Crime Commissioner – to replace the town’s aged CCTV cameras, which are around 20 years old and run on out-of-date technology.

It aims to install, own, and data-control, around 20 cameras throughout Exmouth with ‘heavy focus’ on the town centre.

The current four-week council trial of ANPR CCTV on the seafront began on August 10. 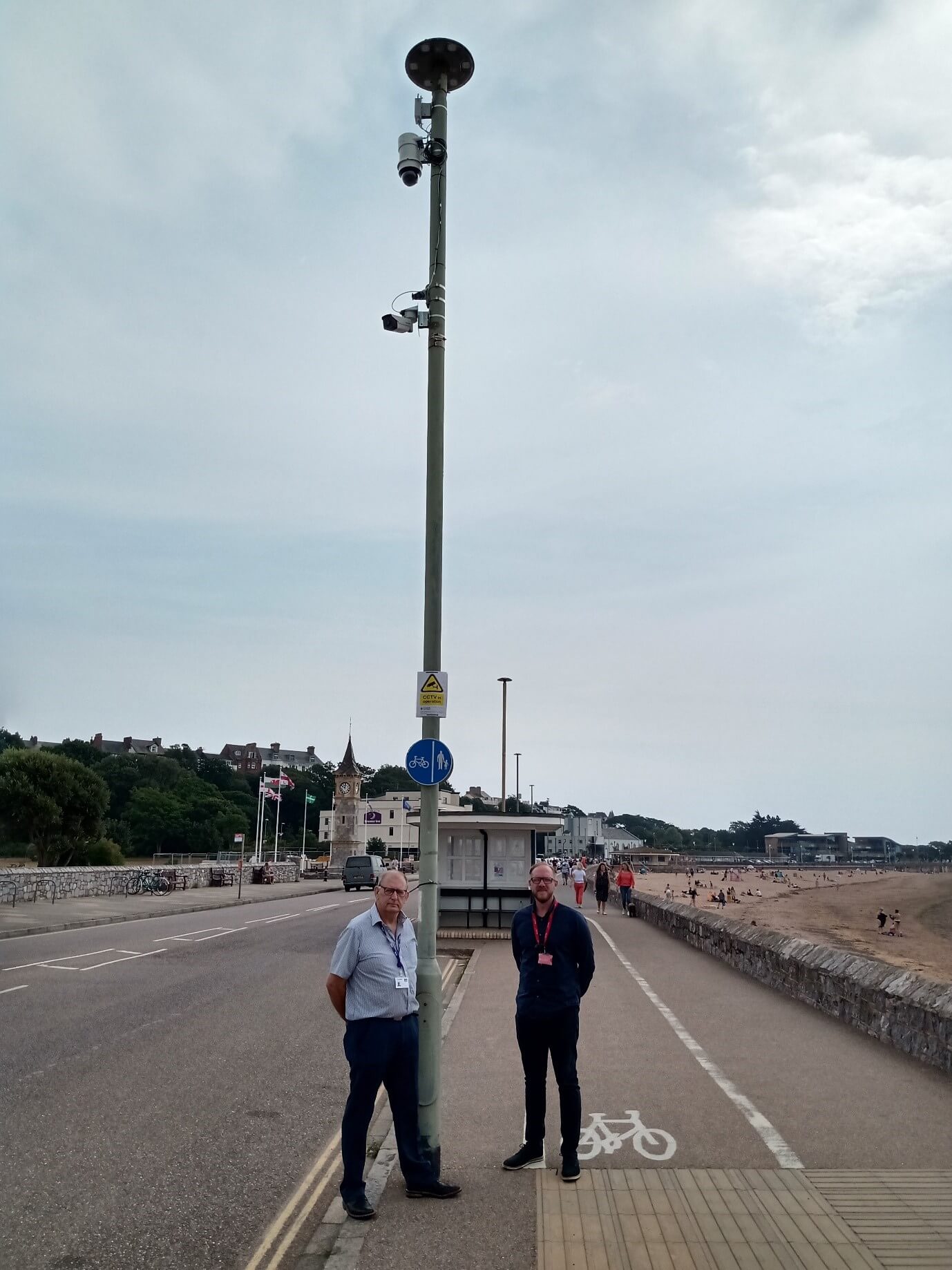 Exmouth Town Council’s trial of automatic number plate recognition (ANPR) technology on the seafront, opposite Alexandra Terrace, is one of a number of CCTV developments operating in the town.

The trial camera, fixed to a lamppost where the seafront festoons usually hang, has night vision, runs off 4G technology with a mobile signal, and an existing electrical power source.

Town council clerk Lisa Bowman said if the trial proves successful members will put together a proposal and offer it out to tender.

She said: “We are looking at replicating the coverage with heavy focus on the town centre, and extra coverage at the request of the police.”

Mrs Bowman said the current seafront trial location had been selected for ease rather than ‘Big Brother’ reasons.

“We have had conversations with the police,” said Mrs Bowman. “They said they would like extra CCTV on the seafront, with ANPR to combat anti-social behaviour.

“We are trialling the ANPR with the mobile signal for four weeks to see what quality is like.

“If the trial is successful, we will put a spec together to go out to tender.

“This is part of a trial to identify the technology that’s available now. We want to have a trial with a mobile signal, to meet our needs.”

It said any new equipment would be owned by the town council and be more suited to the needs of Exmouth.