Police are appealing for help to trace a bronze life size metal statue of a grazing donkey stolen from a garden centre in Sidmouth.

Devon and Cornwall Police said three statues in total were stolen from Sidmouth Garden Centre at around 11.25pm on Thursday, August 13.

The statues stolen were a bronze donkey, worth £899, a five-foot high white lady on a round plinth, with a value of £149, and another figure, with details yet to be released.

Police have released an image of an exact replica of the donkey statue stolen from the garden centre, in the Stowford area of Sidmouth. 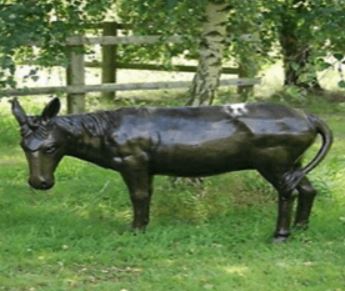 Have you seen this donkey statue?

Anyone with information about the theft, or who knows of the whereabouts of the statues, is asked to call 101.

A Devon and Cornwall Police spokesperson said: “Police have received a report of the theft of three statues from Sidmouth Garden Centre.

A bronze metal life-size donkey grazing, valued at £899, was stolen along with a white five-foot lady statue on round plinth, valued at £149, plus another statue at present unknown.”