Proposals for new flats in the heart of Seaton –  that will ‘show the town means business’ – have been approved.

They described the mooted reasons for refusal as ‘poppycock’.

A pair of commercial units and a dwelling will be demolished and replaced with eight flats and two retail units as part of the project. 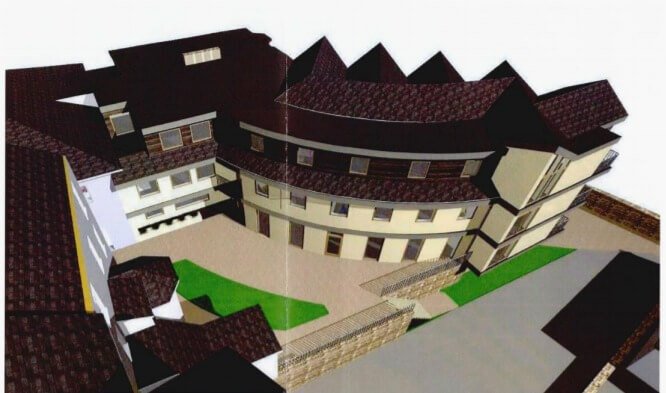 EDDC officers had said the bid should be turned down over ‘substantial harm’ to the conservation area, overlooking, overdevelopment, and the ‘absence of any significant public benefits’.

Applicant Garry Mettam told the meeting on Wednesday his proposal would replace a ‘dilapidated’ space that was in ‘desperate need’ of improvement.

He added that it would improve the ‘vitality’ of the town centre and the only issue was an ‘overly-restrictive’ policy that it would harm the conservation area.

Councillor Geoff Pook said: “The car park is the only place you will be able to see this from.

“This is a new an emerging part of Seaton, it needs regenerating, and are we really saying what we can see now is a heritage asset that needs to be protected? I cannot see that is a viable argument.

“This will be quality development and give new opportunities there for people to live and work and visit.

“I cannot see anything to oppose this.

“Seaton needs regeneration and, while the subjective design may not be to everyone’s liking, it fits with the new buildings that have gone in in recent years.

“This is someone who wants to invest and get Seaton moving again. It will show that Seaton does mean business and this will get a new and more modern area of Seaton.”

How the plot could look.

Cllr Philip Skinner added: “Seaton is an up-and-coming town and this is a developer who wants to invest money in the town.

“Is this overdevelopment of site? That’s poppycock as we are talking about eight flats in the middle of the town centre. We need people living in them and using the shops and I fully support of this.”

Cllr Mike Howe said that the design was out-of-keeping with the area, adding: “Reading the report, I thought the officers had got it wrong and it should be approved, but, seeing the pictures, I just don’t like the design.

“It is the three large windows staring at the car park that just look out of place and if that was changed, I could support it.

“The design is sticking with me and out-of-keeping with every other building around there, and just think it is wrong. It is a good idea, but I don’t like the design.”

Councillors voted by nine to four, with one abstention, to approve the plans.

Delegated authority was given to EDDC’s development manager to apply appropriate conditions to the scheme in consultation with the chairman of the committee and ward members.

Play areas in Exmouth, Honiton and Seaton to benefit from £325,000 of improvements