Tuesday, August 9
Trending
You are at:Home»News»East Devon»Firefighters from two counties work through the night to tackle large blaze at an East Devon business park

Crews from two counties have spent the night tackling a large blaze at an East Devon business park after a 500-tonne pile of wood caught fire.

Crews from across Devon and Somerset worked through the night to bring the blaze under control, with firefighters still on scene and tackling the blaze at 10am.

Crews are expected to remain on-site throughout Friday, damping down the area ahead of the clear-up.

The fire service reported the wood pile ‘still alight’ at mid-morning on Friday (July 17), covering an area of 50m square.

At 10am crews were still at work with the aerial ladder, three ground monitors, two main jets and water bowsers with dams.

“Then they increased the number of appliances and made pumps eight, two aerial platforms, and high-volume pumping from the Urban Search and Rescue Team to make sure we had plenty of water.

“We had appliances from all around the area.

“They tackled the fire. It’s still ongoing. It’s reduced down to four appliances, one aerial platform and one water bowser to make sure we have an adequate water supply.

“They will be there for the day, damping down and clearing up with the occupiers.” 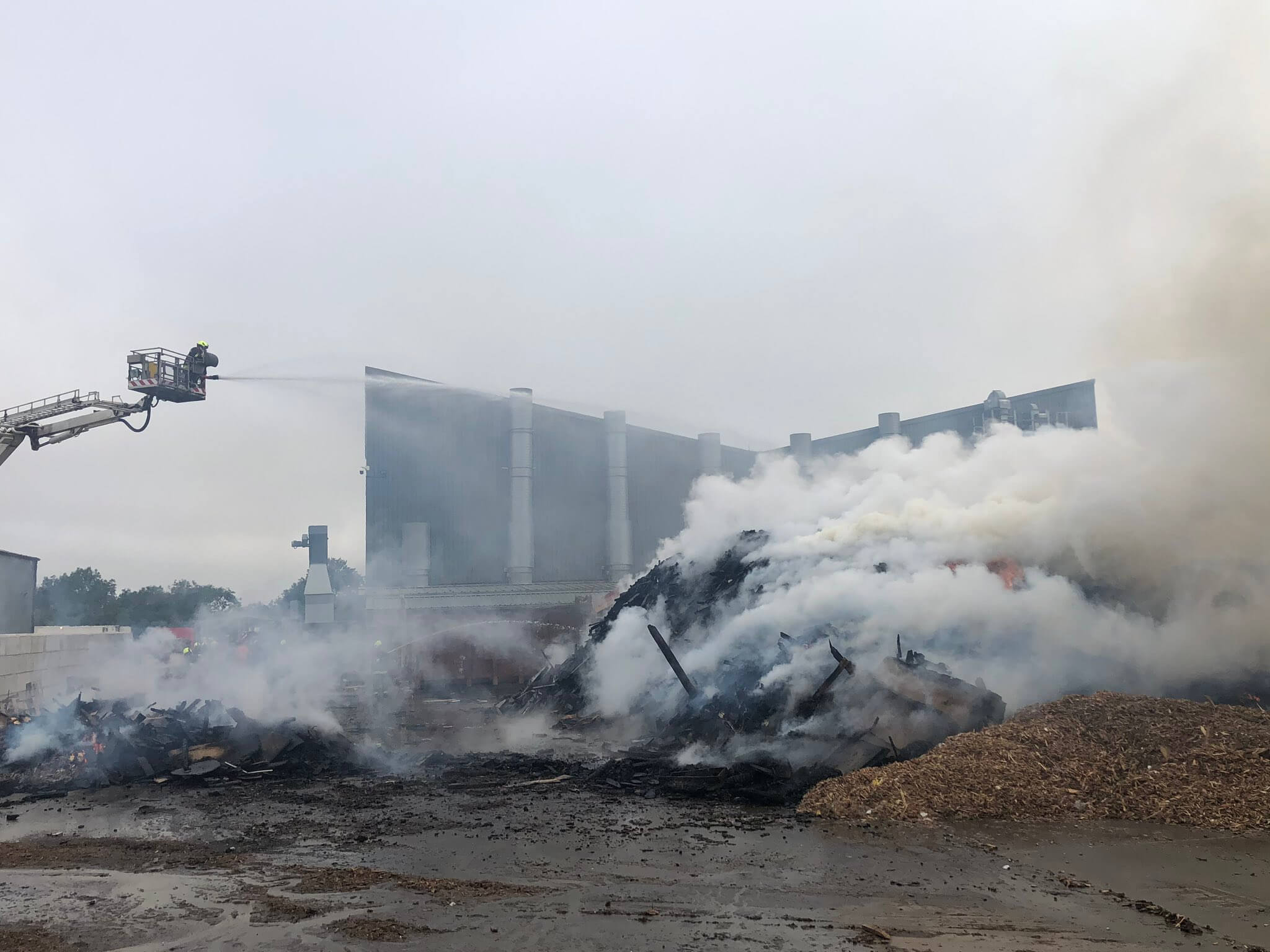 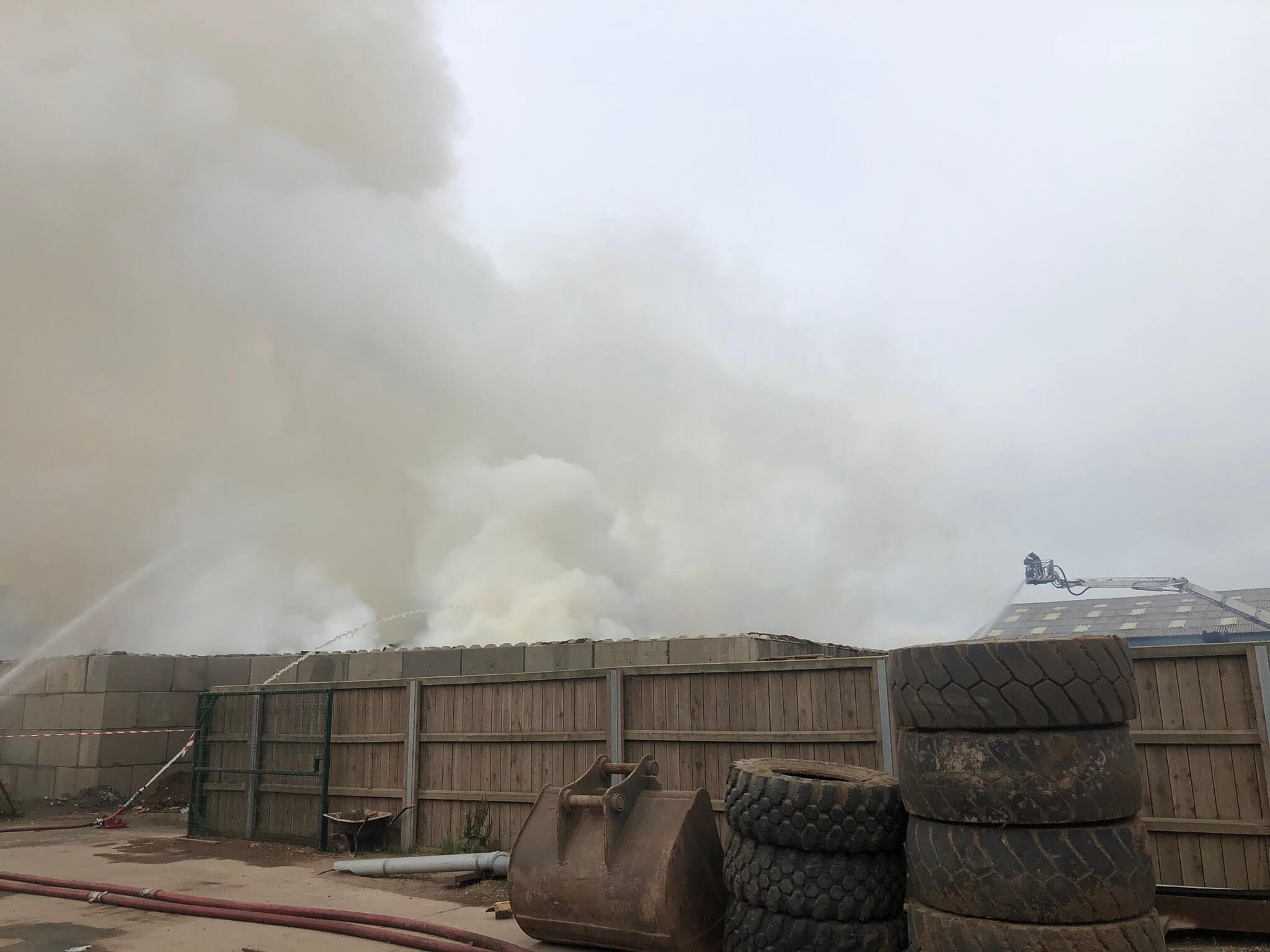 Because of the scale of the blaze, crews were sent from fire stations across Devon and Somerset, from Middlemoor, Danes Castle, Topsham, Sidmouth, Exmouth, Honiton and Colyton and the Urban Search and Rsecue team, based at fire service headquarters, Clyst St George.

A Devon and Somerset Fire and Rescue Service spokesperson said: “Fire appliances from Middlemoor and Danes Castle were mobilised to this incident along with the water bowser.

“On arrival, crews made a request for an additional six fire appliances and two aerial ladder platforms to be mobilised.

Fire crews were called to the business park a few minutes after midnight where they got to work with compressed air foam jets.

Shortly before 1am, crews requested the high-volume pump, the foam cannon and extra foam.

Surrounding buildings were kept cool by crews using safety jets as crews continued to tackle the blaze, from above, using two aerial ladder platforms, jets and the high-volume pump.

Shortly before 3.45m, a second high-volume pump was sent to the site at the request of firefighters.

The fire service said ‘steady progress’ had been made by 7am, with crews damping down the site with five jets and the aerial platform used as a water tower.

By 7.30am four crews and appliances remained, fighting the fire and later, damping down the site.

By 9am the fire service brought in relief crews from Teignmouth, Tiverton, Colyton, Ashburton, Buckfastleigh, Dawlish, Seaton, Chagford and Middlemoor.