Tuesday, March 2
Trending
You are at:Home»News»East Devon»Seaton»Cycling Seaton mum defies dislocated collarbone to get back on her bike and help cancer charity

A dislocated collarbone couldn’t stop a Seaton mum-of-two from pedalling her way through a cycle challenge to boost a cause close to her heart.

Liz Slade needed surgery after suffering the painful injury after she hit a pothole and fell from her bike at 20mph in April.

She had been out training when the accident scuppered her plans to take part in her first Nello 100 ride in aid of Force Cancer Charity.

But plucky Liz donned a sling and clocked up 26 miles virtually using a turbo trainer as part of the cause’s Furloughed Flyer instead.

“I like to have a goal and it gave me something to aim for. I was absolutely determined the injury wasn’t going to stop me,” she said.

Liz wanted to support Force due to the kindness its volunteers showed her husband Jeremy as he underwent successful treatment for bowel cancer.

The disease had also claimed the life of her beloved grandmother. 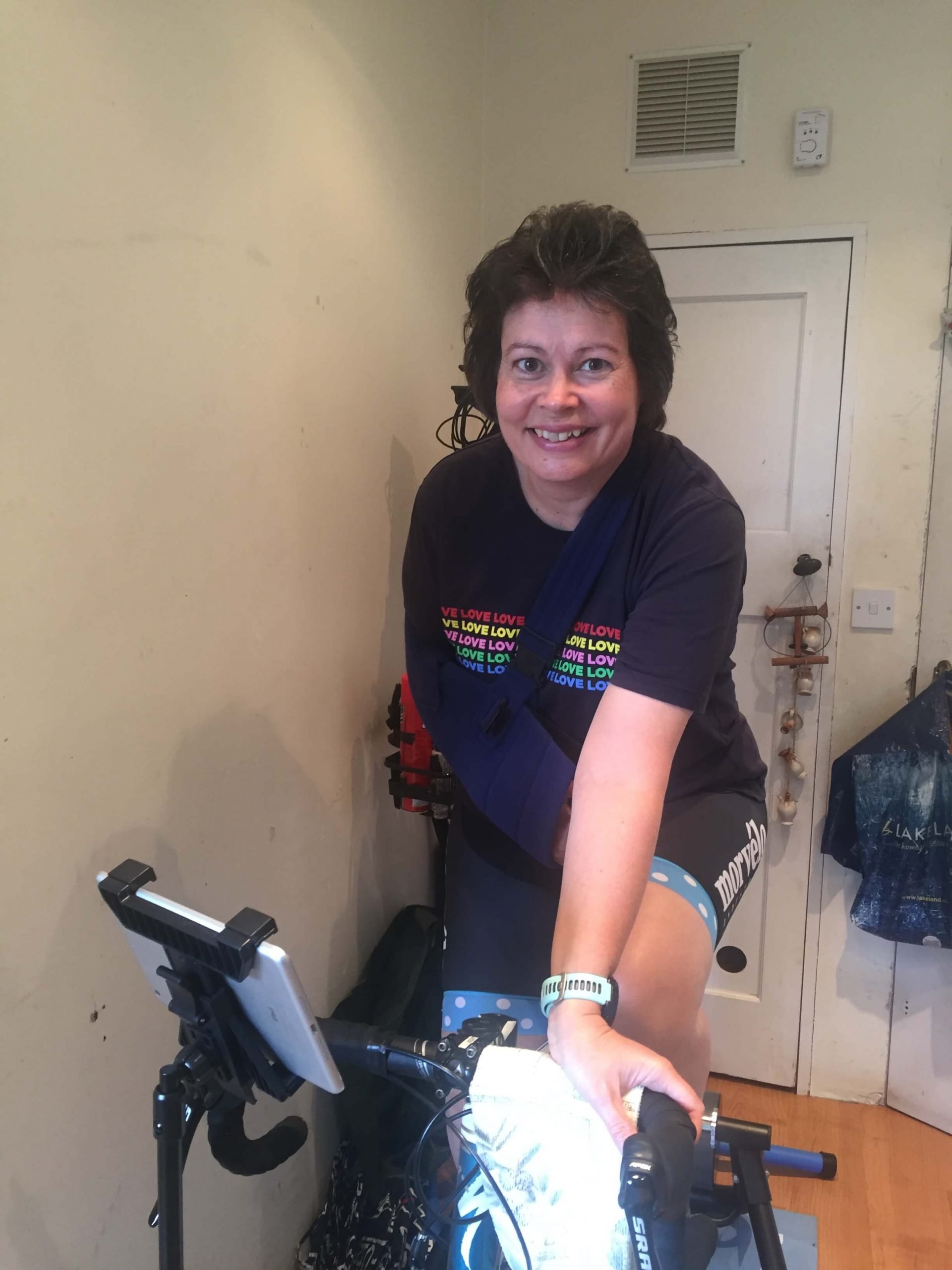 Legal secretary Liz had been training with Jeremy when she went over her handlebars riding downhill and landed heavily, seriously dislocating her clavicle.

Surgeons had to use a special screw to pin the bone back into place.

“I almost overtook my husband as I flew through the air and split my cycle helmet in half when I landed on the tarmac,” said Liz.

The Nello – Force’s biggest fundraiser of the year – takes place every June and sees riders complete 100-mile or 50-mile courses.

This year’s event had to go virtual after the coronavirus pandemic put the brakes on mass participation events.

Cyclists have instead been riding independently over the traditional distances and the Furloughed Flyer was also introduced especially for those who have preferred to stay indoors.

Liz used a virtual cycling app for extra motivation and smashed the 26-mile distance in 75 minutes.

“It was like being out on the road with other cyclists in a big event. Nothing was going to stop me. It was a personal challenge,” she said.

He has ridden the full distance event before and is doing the virtual 55-mile challenge this year.

Jeremy, a self-employed service delivery manager, ‘absolutely loved’ his first Nello experience and was keen to share the buzz with his wife.

The couple were particularly looking forward to riding together on Liz’s first major long-distance event after Jeremy’s recovery from bowel cancer.

He was diagnosed just six weeks after being made redundant and underwent chemotherapy and five weeks of radiotherapy before getting the all-clear.

The couple say they will never forget the kindness shown by Force volunteers running the snack bar at the Royal Devon and Exeter Hospital’s oncology centre during their regular visits for treatment.

“They were so lovely and always made us feel welcome whenever we stopped for a cup of tea or coffee and a slice of fruit cake after Jeremy’s treatment,” said Liz.

“It used to make him sleepy and he needed a lift from something sweet.”

Both are keen to support NHS and cancer charities and are encouraging others to get on their bikes and sign up for the Force Virtual Nello.

“It’s all about you and your ability. If you are pushing yourself to achieve something you didn’t think you could, you are winning,” added Liz.

Play areas in Exmouth, Honiton and Seaton to benefit from £325,000 of improvements