Tuesday, January 19
Trending
You are at:Home»News»Updated interactive map shows where coronavirus deaths have been recorded in East Devon and Exeter

New figures have shown coronavirus-related deaths have been recorded in all but six of the wards in East Devon – with the highest numbers in Axminster, Seaton, Exmouth and Sidmouth.

An updated interactive map has also revealed just one area of Exeter has avoided fatalities due to the virus.

The Office for National Statistics (ONS) has analysed all deaths involving Covid-19 that occurred between March 1 and May 31, and were registered by June 6.

In East Devon, statistics show there have been ten confirmed deaths in Axminster – five of which occurred in April and five in May.

There have also been ten in Seaton; nine of them in April and one in May.

Nine fatalities have been recorded in Exmouth, six of which have been in the Littleham area, two in Halsdon and one in the town ward.

Five deaths have occurred in Sidmouth Town – all of them in April – with one recorded in Sidford in May, and a single fatality in Sidbury, Offwell and Beer.

There have been a total of three deaths in Honiton, two in Budleigh Salterton and one in the Ottery St Mary and West Hill ward.

The number is zero in Feniton and Whimple; Newton Poppleford, Otterton and Woodbury; Cranbrook, Broadclyst and Stoke Canon; and Dunkeswell, Upottery and Stockland.

The figures are based on coronavirus being confirmed as the underlying cause or mentioned on the death certificate as a contributory factor.

In Exeter, a total of 13 deaths have been recorded in St Thomas, and nine in the Pennsylvania and University ward.

Only Heavitree West and Polsloe has had no fatalities. 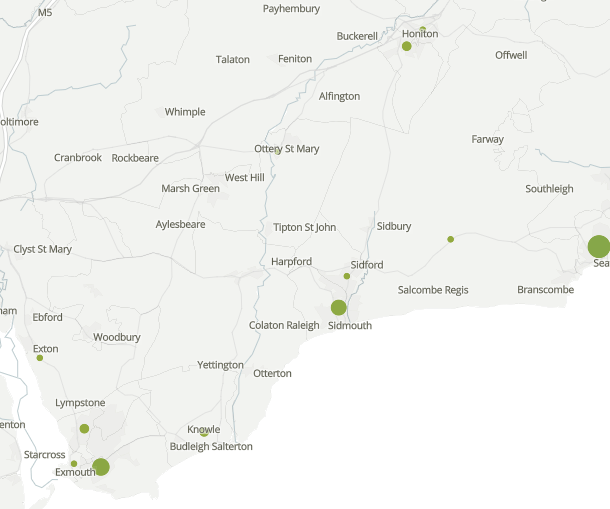 Coronavirus-related deaths in Exeter by area 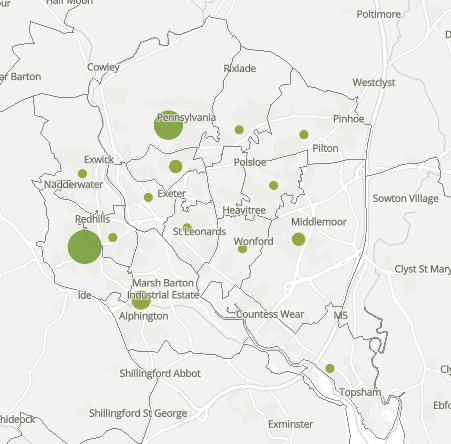 The map for Exeter. Image: ONS

Points on the map are placed at the centre of the local area they represent and do not show the actual location of deaths.

The size of the circle is proportional to the number of deaths.

The ONS says that, to protect confidentiality, a small number of deaths have been reallocated between neighbouring areas.

Figures exclude deaths of non-residents and are based on May 2020 boundaries.

The ONS uses a number of different data sets to record the figures related to Covid-19 deaths.

Another set of numbers for fatalities up to May 29, but registered up to June 6, show a total of 44 deaths have been recorded in East Devon and 38 in Exeter.