A five-year-old coronavirus survivor from Sidmouth has received a special delivery from Boris Johnson, full of praise for his ‘fantastic’ model Lego Nightingale Hospital.

Freddie Taylor was ‘ecstatic’ to learn the Prime Minister had written to thank the Sidmouth Primary School pupil for his ‘great effort’.

The youngster went to great lengths to create the detailed model after watching Mr Johnson unveil Nightingale Hospital plans on the news.

Freddie was presented with the personally-signed letter today, Saturday, June 13, by East Devon MP Simon Jupp, who made a social distance special delivery to the schoolboy’s home. 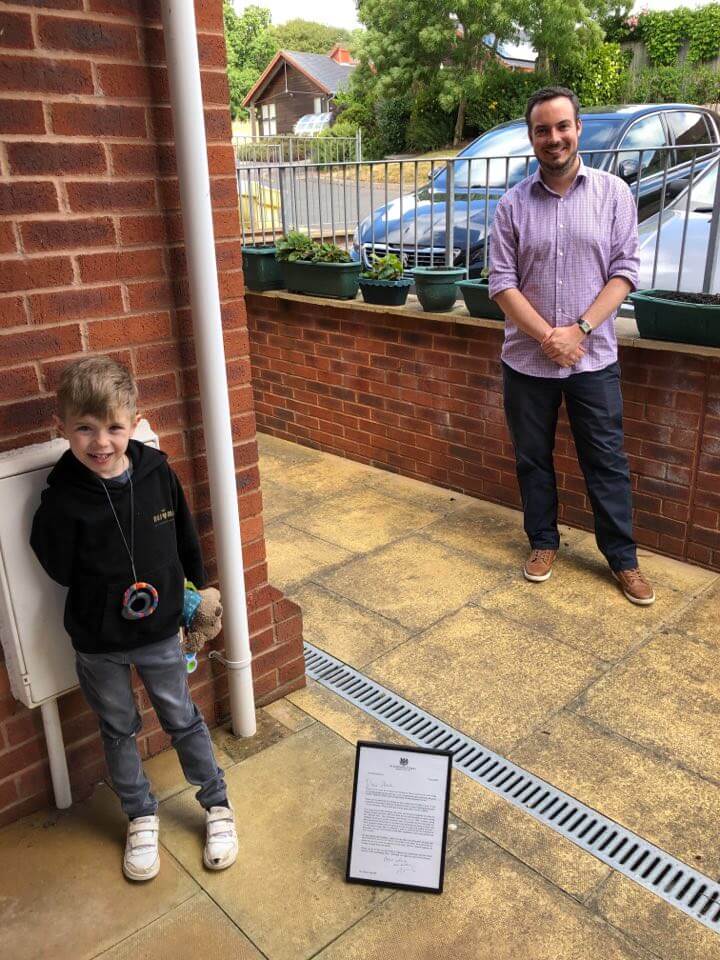 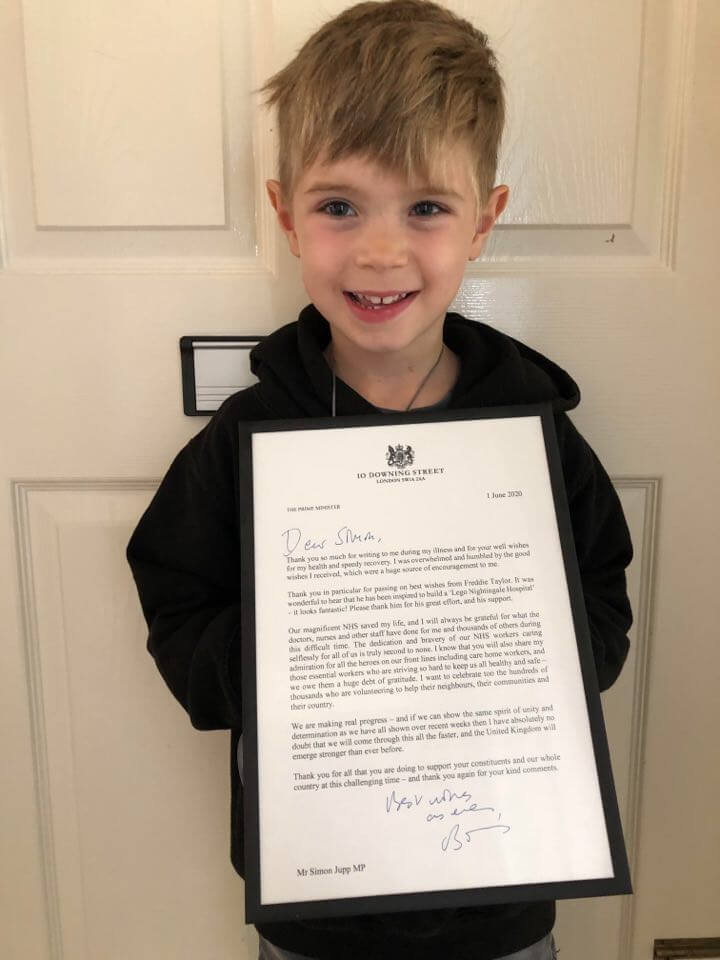 Freddie was presented with the original copy of the letter, signed by the Prime Minister.
Photo: Katie Turner. 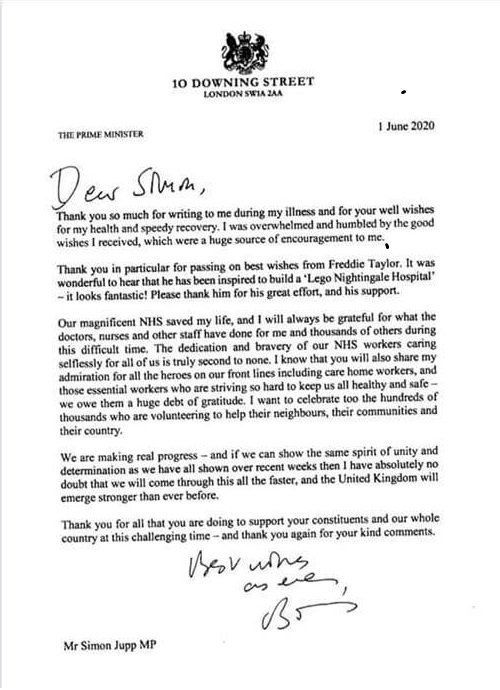 The letter sent by the Prime Minister, Boris Johnson. 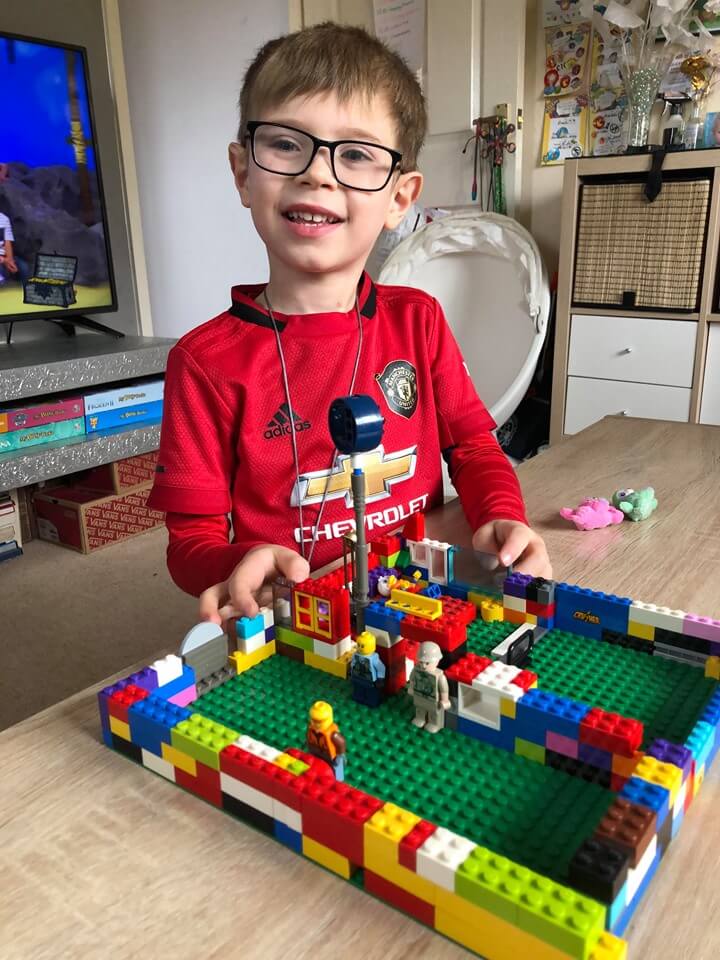 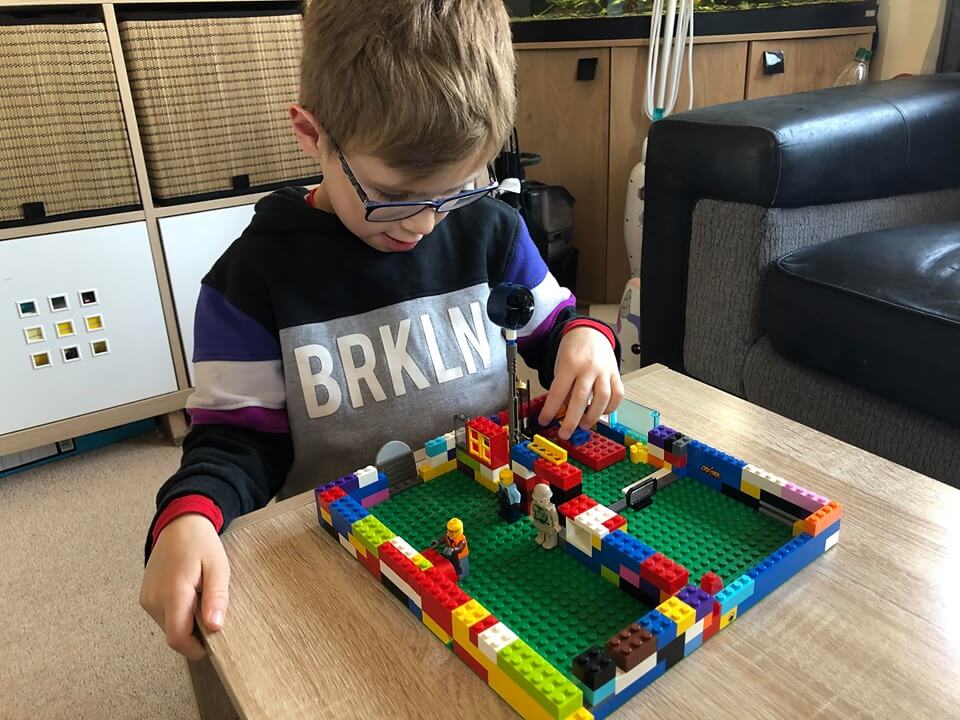 The youngster had seen Boris Johnson talk on the news about Nightingale Hospitals, and decided to make one from Lego.
Photo: Katie Turner.

Freddie’s mum, Katie Turner, 24, of Chambers Close, Sidmouth, said: “Freddie said it was his best day ever. He wanted everyone to know ‘Boris said my Lego was fantastic’. He’s just absolutely over the moon.”

Freddie’s Lego Nightingale Hospital, with a two-bed ICU unit, doctors on standby, a box for used PPE equipment, a fan to help patients breathe, and windows so the sick can wave to relatives outside, caught the attention of the PM – and the world – when it became a social media hit in April.

The schoolboy – who himself fell ill with the virus shortly after finishing the model – had been keen Boris would see his creation, and mum Katie promised she would do her best to make sure a photo of Freddie’s Lego would reach the Prime Minister.

Freddie’s dream became a reality when MP Simon Jupp told the family he wanted to help. He wrote to the PM with a photo of the youngster’s model.

Simon said helping Freddie had been ‘genuinely one of my favourite moments as an MP’.

He said: “It was great to meet Freddie and his lovely family. I know how much the letter means to him and wanted to make sure he had the original signed by the Prime Minister.

“It definitely put a smile on both our faces.”

Mum-of-two Katie said her son has sensory processing disorder, which means he has a different interpretation of what he sees or hears. He is waiting for tests to determine if he is autistic.

Without his daily routine of school, Katie said lockdown had often left Freddie feeling overwhelmed and unable to cope.

She said his avid watching of the news during the pandemic helped Freddie understand the coronavirus crisis.

“He was watching the daily news conference when Boris was talking about the Nightingale Hospitals and how helpful they would be,” Katie said.

“Freddie’s interest in watching the news is intellectual. It’s helped him to ask questions. I have kept it to the basics – what he can watch.

“With the Nightingale Hospital he could process that we are going to come out of this and there’s a place that will help people get better and there’s enough space for people.

“Freddie said the next day ‘I am going to build a Nightingale Hospital with Lego’ so I left him to it.

“He’s five and I wasn’t expecting what he produced.

“He wanted Boris to see. He wanted his picture to reach Boris. I said ‘we can try’.

“I always tell both my kids ‘if you try that’s the best you can do’. Whatever happens after trying, it’s winning.”

She added: “We are just so grateful to Simon Jupp, to take the time out and do this for Freddie. He must have enough to do, apart from making a little boy happy.

“Freddie is just ecstatic. He said ‘everyone can see my hospital now’.”

Katie, who is also mum to three-year-old daughter Robin, turned to social media in her quest to help Freddie reach the PM.

The photo of his Lego quickly became a global hit, reaching Australia and America – it also caught the attention of the East Devon MP, Simon Jupp.

Boris, who had just tested positive with COVID-19, learned of Freddie’s Lego Nightingale Hospital when Simon wished him a speedy recovery, and sent a photo of the youngster’s creation.

In a letter to Boris, Simon told The PM ‘you are Freddie’s hero for your work to keep the country going in these unprecedented times. I am sure you’ll agree Freddie’s hospital is brilliant and he’s an extremely talented and thoughtful young man’.

Boris Johnson later replied ‘it was wonderful to hear that he has been inspired to build a ‘Lego Nightingale Hospital’ – it looks fantastic! Please thank him for his great effort, and his support’. 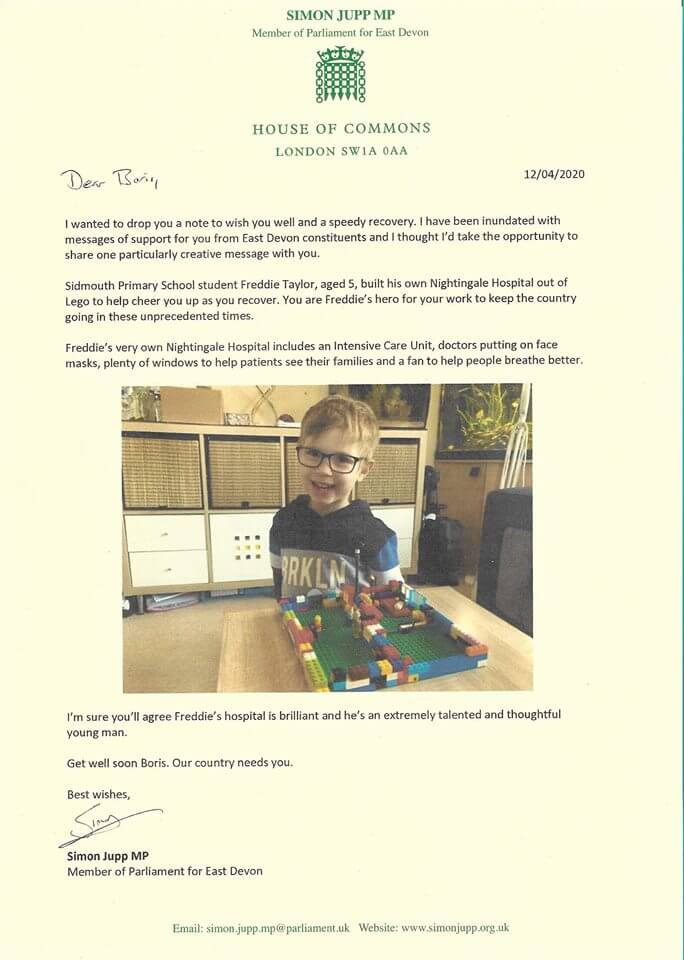 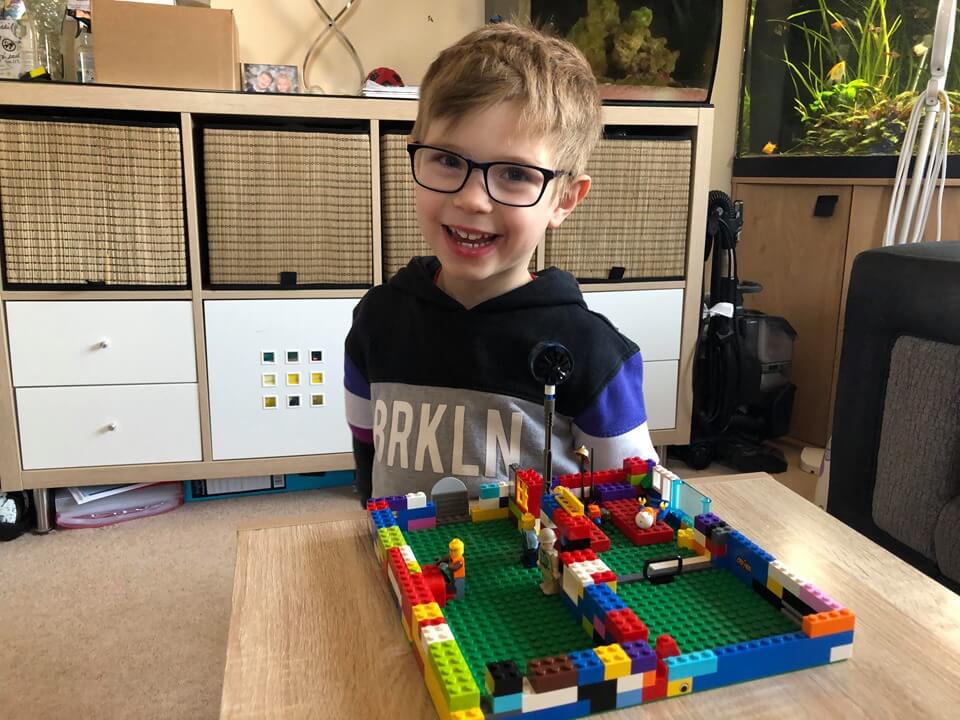 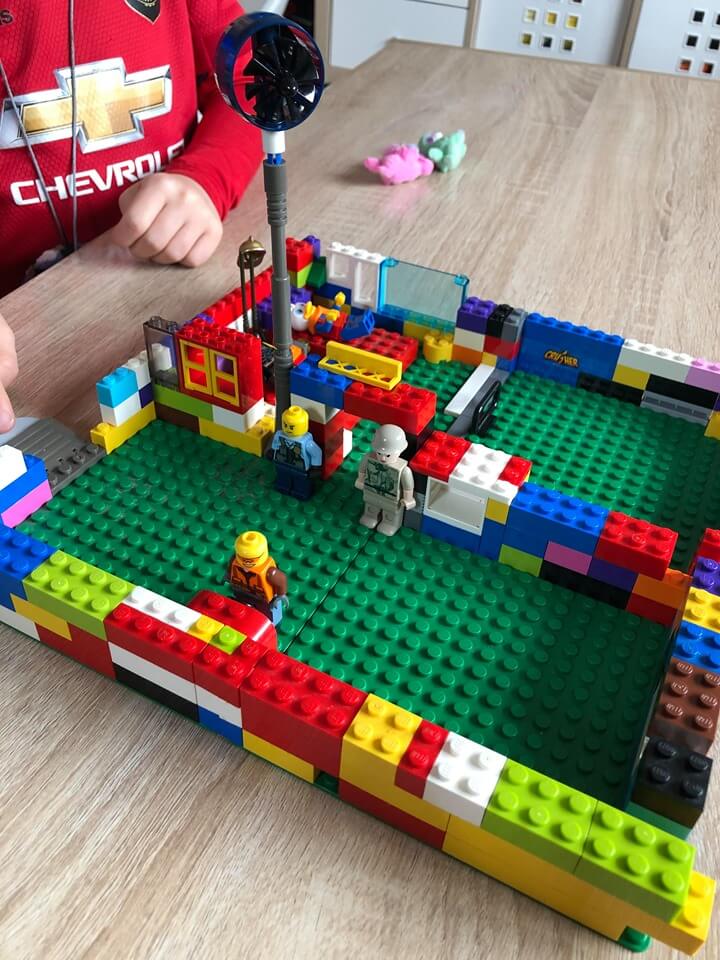 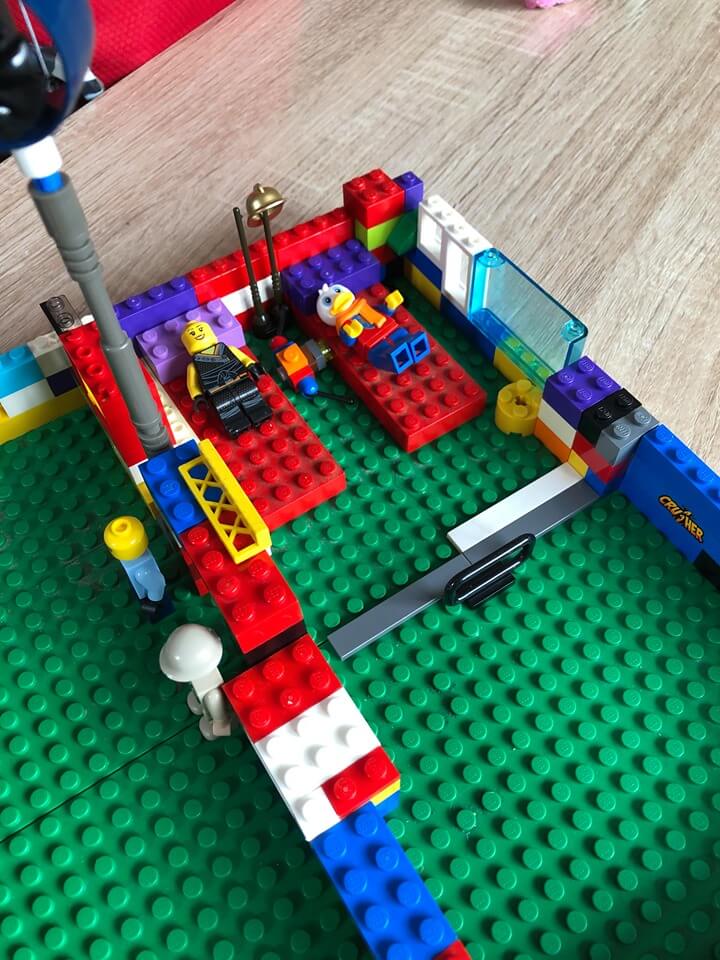 Not long after Boris was taken into intensive care with the virus, Freddie was struck down with coronavirus, on top of a chest infection, and taken to hospital.

Full-time mum Katie said: “He was really, really poorly. The doctors and nurses were amazing but there was nothing physically they could do. We just had to ride it out.

“He was gasping for air. You could see he couldn’t get enough air in. You just feel helpless. You can’t do anything to help him.

“I remember the day when the doctor said it’s COVID. Hearing those words, it was bit surreal.

“I couldn’t believe we got it. We have only been at home. My partner and I take in turns to go shopping.”

After spending the day in hospital, the youngster was given antibiotics and he made a full recovery at home.