Plans to keep the £300million redevelopment of Exeter city centre moving have been unanimously backed by councillors.

The CityPoint regeneration scheme features 250 build-to-rent homes and a budget hotel in Sidwell Street, a four-star hotel opposite John Lewis, a new office quarter, food, drink and retail outlets, and a new square and civic space in Paris Street.

Proposals will see the Civic Centre relocated into a new public sector hub and the existing building replaced with housing.

A meeting on Tuesday night was told: “We must seek to keep the project moving.” 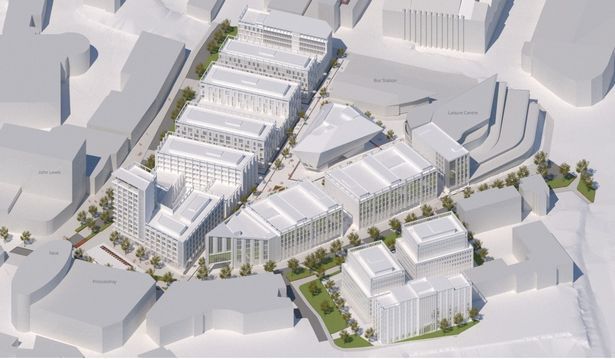 Exeter City Council’s executive backed a recommendation to allow its surveyor to explore potential routes to the early appointment of a development partner to deliver the collective vision.

City surveyor Michael Carson told members it is critical to maintain the momentum, adding: “There is some concern that the trend towards higher utilisation and densification of offices may reverse as transmission risk of highly dense, large, open planed offices is now clearly up for debate and the council may also decide to review its own workplace and take less space as a result.

“That said, it is felt that any impact on residential investment yields will be short-lived as the market fundamentals have not changed – there is still an acute shortage of good-quality homes, and both housing and infrastructure delivery will be a key focus for any government initiatives to re-start the economy.”

Mr Carson said the main risk for the scheme rests on the speculative hotel and office elements and that interest is likely to be more cautious over the next nine to 12 months, but, in the long-term it will still be there.

He added: “Our aspiration now must be to explore how we can deliver partnerships with other organisations that are not only attracted to the fundamentals of the proposed scheme but also are inclined to take a long view of the development potential of the CityPoint site.

“We need to look forward without delay and try to secure partners for a ‘patient capital’ approach for the site and have a long term vision for the site to bring things forward sooner rather than later.”