Sunday, May 16
Trending
You are at:Home»News»East Devon»PHOTOS: Jar of Lidl gherkins brings London landmarks to life in Sidmouth for firefighter’s ‘marathon’ run

A firefighter brought the landmarks of London to Sidmouth when he tackled a marathon with a difference during lockdown.

The London Eye, Shard, The Gherkin, Tower Bridge and Cutty Sark appeared at the Manstone Recreation Ground when Allan Kay, 46, ran his alternative London Marathon in Sidmouth, in aid of The Fire Fighters Charity.

Married Allan lapped past painted pictures of London busses and black cabs, a jar of Lidl gherkins, the Cutty Sark made from a full-size surf board, and a bicycle wheel London Eye for his 26.2 challenge of laps around the pitch. 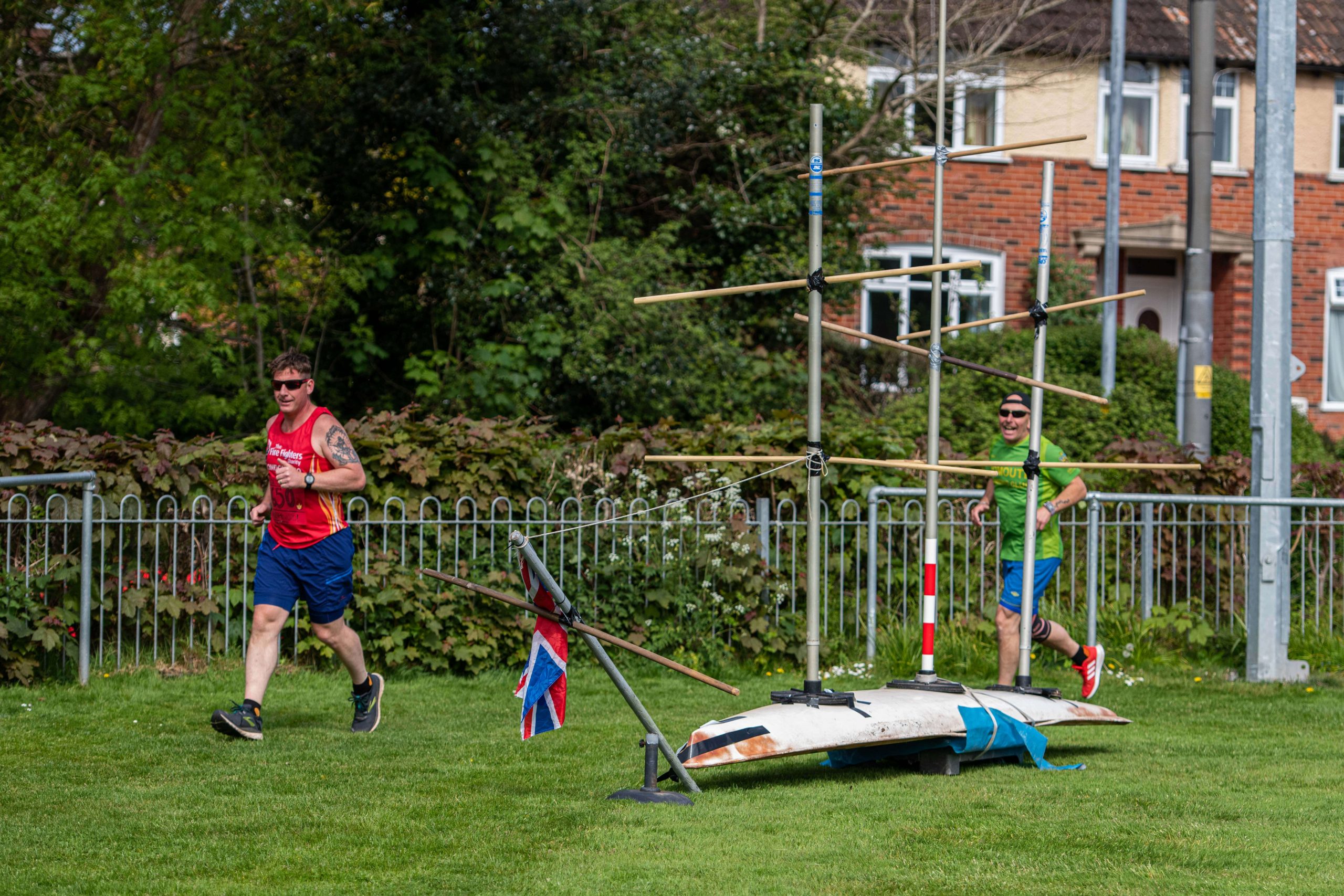 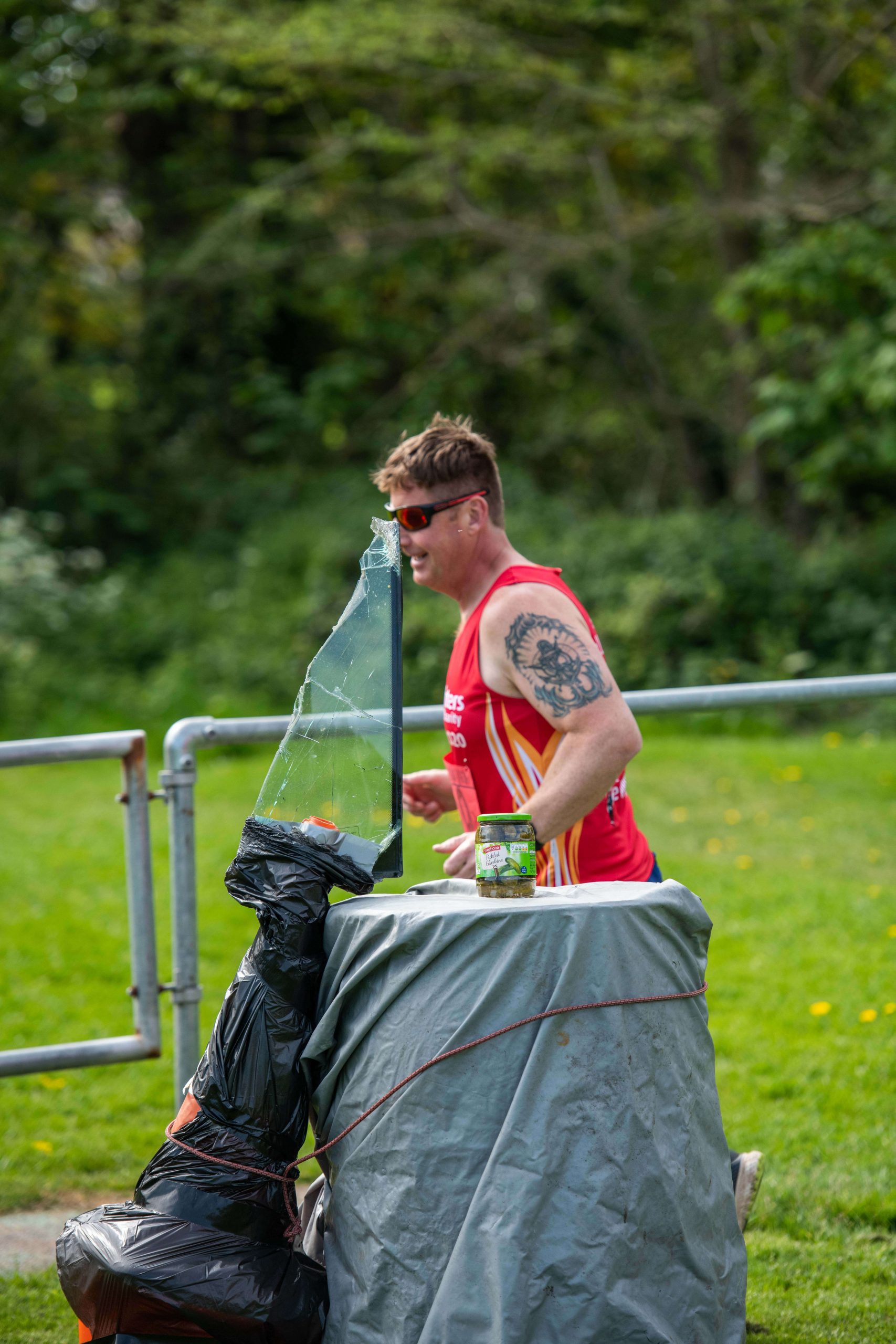 A jar of Lidle gherkins and a model of a shard of glass sorted the problem of how to create London landmarks, The Shard and The Gherkin.
Photo: Kyle Baker. 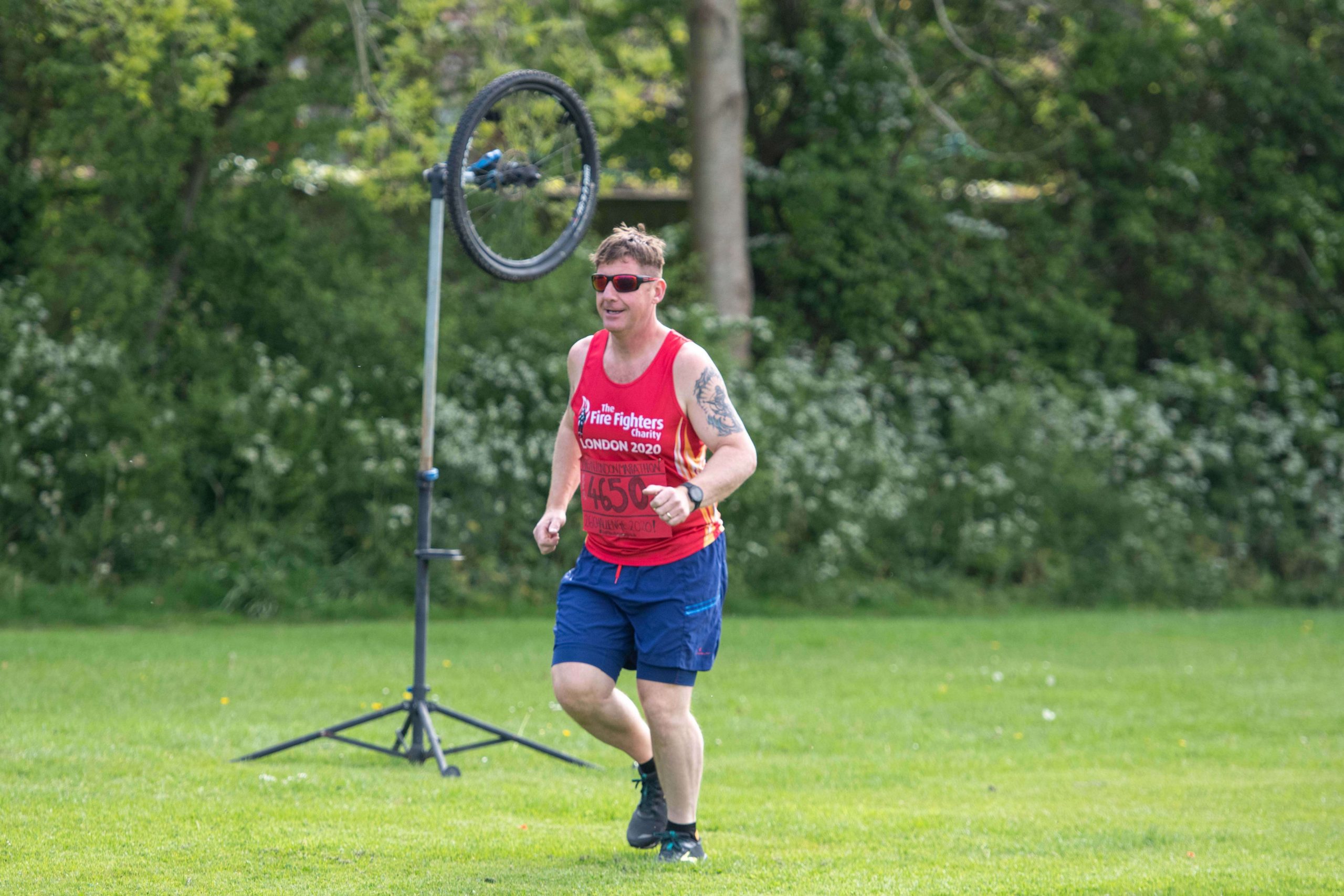 The Sidmouth version of the London Eye.
Photo: Kyle Baker.

His alternative 26.2 lap ‘marathon’ of 5.35 miles took 49.53 minutes to complete and ended with Allan receiving a medal made by his 21-year-old daughter Nikita, when he crossed the finish line of a painted crowd, which included images of his own family and friends.

Allan, an on-call firefighter at Sidmouth, and wholetime crew member at Exmouth fire station, had been training for April’s London Marathon but changed his plans when it was postponed until October because of the coronavirus crisis and lockdown.

Marathon organisers set up the 26.2 challenge in a bid to help charities faced with the loss of funds as a result of the pandemic.

Allan, who was geared up to run the London Marathon for the first time, in aid of The Fire Fighters Charity, said: “I thought if I can’t do the London Marathon I would go around Sidmouth football pitch and would put some London landmarks out for me to look at while I was doing it. It was for a bit of fun really.

“It was really fun running around looking at the bits and pieces I could have seen.

“The most simple one was The Gherkin. I just I went to Lidl and bought a jar of gherkins. I thought ‘how can I build a gherkin?’ and thought ‘well I will just do that’.

“I was disappointed at the time about the London Marathon was but what do you do?

“Whatever happens I will still get to do it at some point. It just means I have got more time to train and hopefully I will be quicker and have more time to raise money for the Fire Fighters Charity.”

A collection bucket left on the path nearby raised more than £180 for the cause in donations made by walkers on the day, added to more than £2,800 raised through Allan’s JustGiving page for The Fire Fighters Charity.

The iconic London landmarks recreated at the Sidmouth football pitch were designed with the help of Sidmouth firefighter Barry Morton.

Allan ran past a full-size canoe with masts for the Cutty Sark, a jar of Lidl gherkins instead of The Gherkin; plastic boxes were turned into Tower Bridge. The London Eye was a suspended bike wheel and a plastic model of a shard of glass attached to a traffic cone meant Allan could run past The Shard. 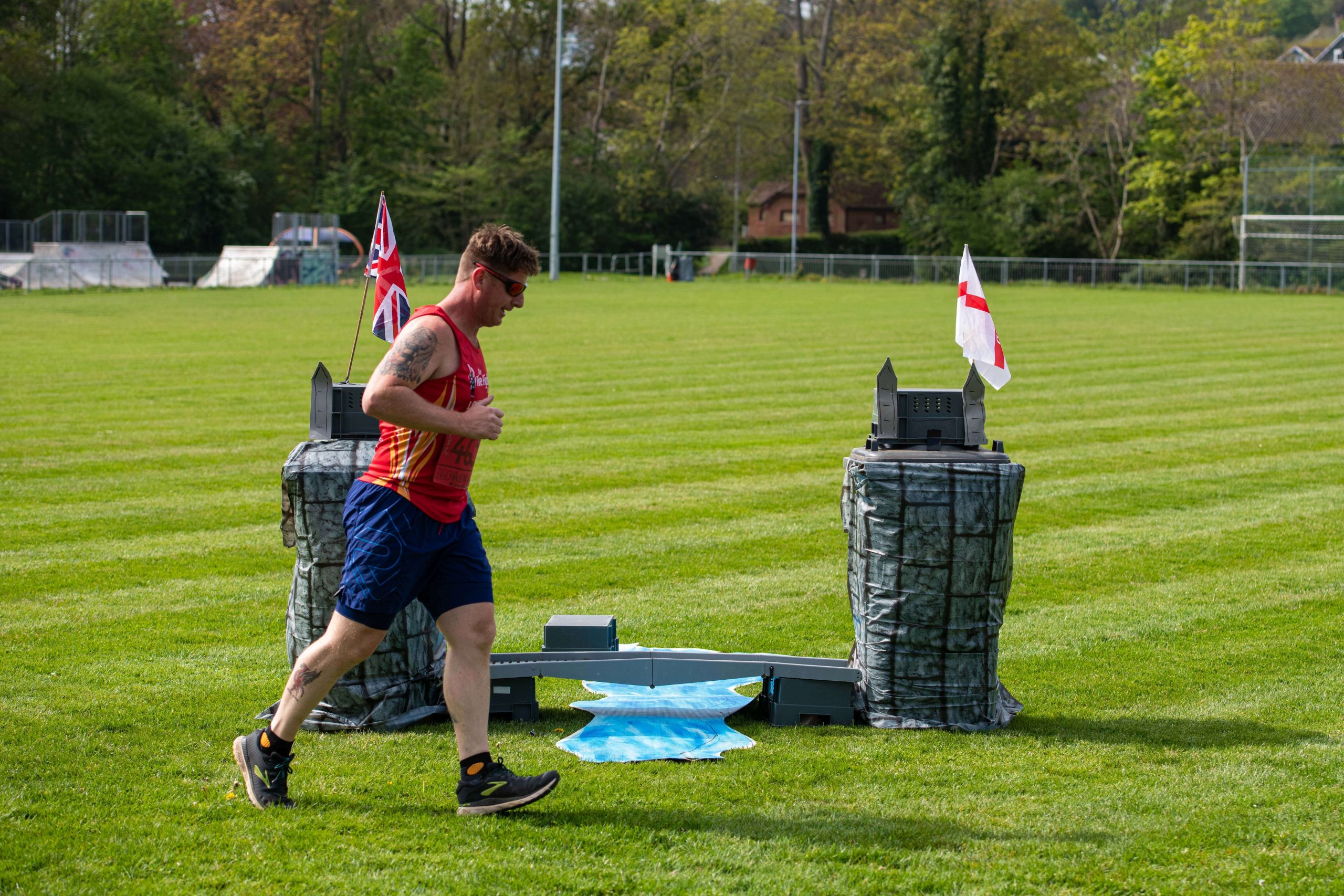 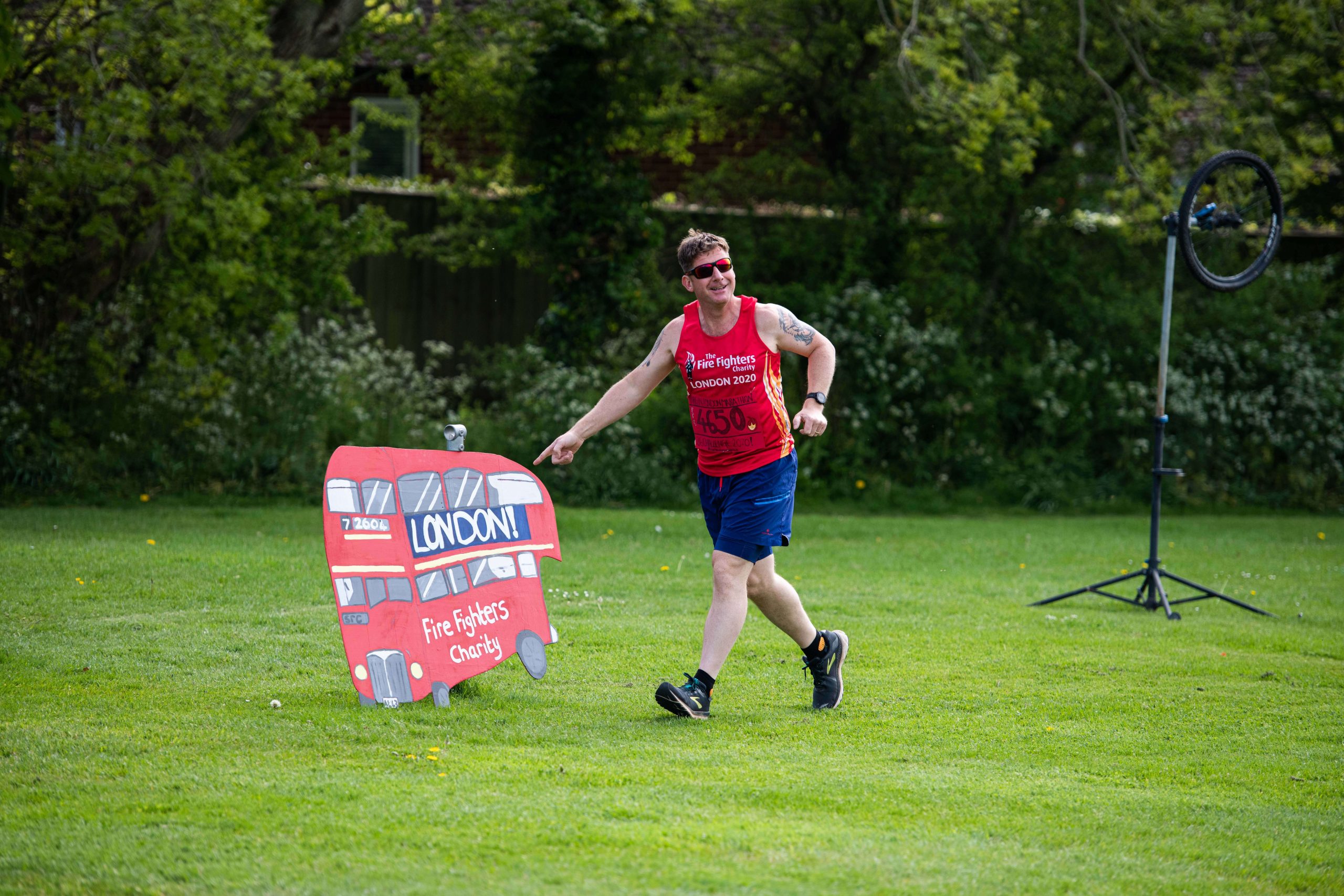 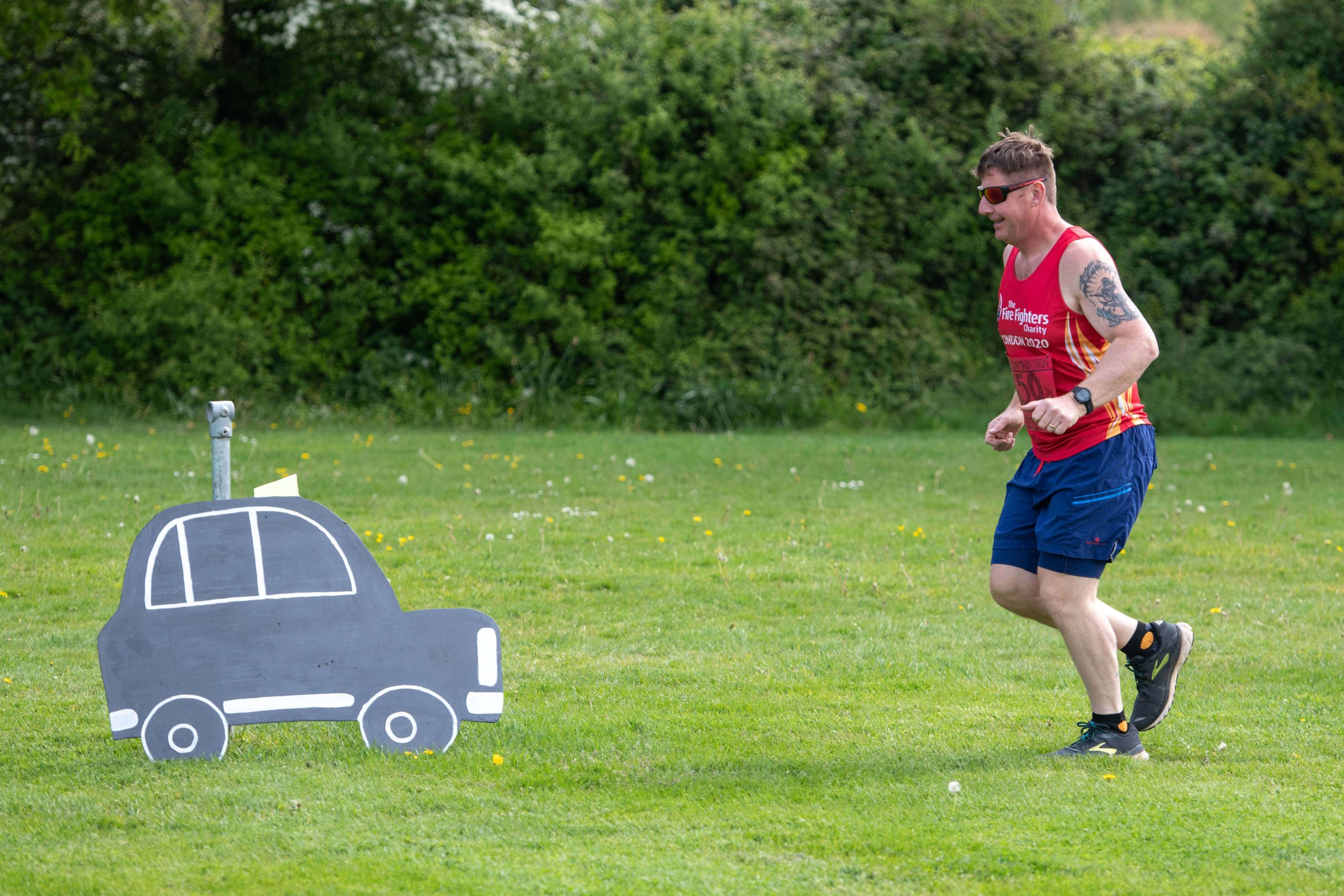 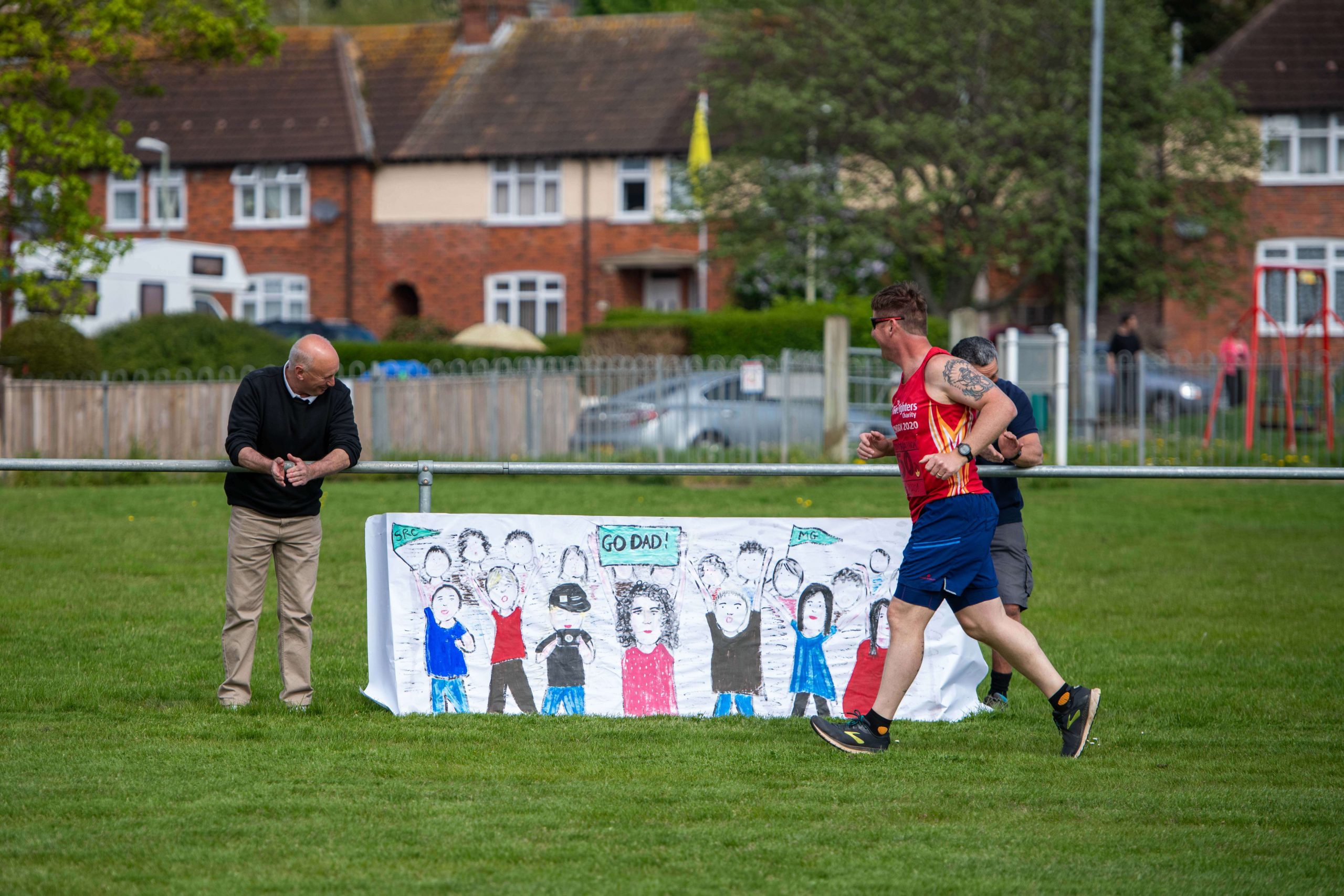 At the finish line was a painted crowd, created by Allan’s family, which included the faces of those who had been expected to cheer him home in London.

The firefighter’s wife Jenny, 44, their daughter Nikita, her boyfriend, Kyle Baker, and his parents, Alexa and Graham Baker, were painted into the crowd in what Allan said was ‘a really nice touch’ in bringing the London Marathon to him.

He was joined in his challenge by Adrian ‘Gripper’ Horne from Sidmouth Running Club, who kept at a two-metre distance to keep him company as he ran.

Allan, who has previously run trail and off-road marathons, said: “I live just over the road from the pitch. I wanted to make sure I was sticking to social distancing guidelines, which is why I chose the football club. It’s 100 yards from where I live and it was going to take under an hour.

He added: “Any help I had they could do social distance-wise, so they could keep away from each other.” 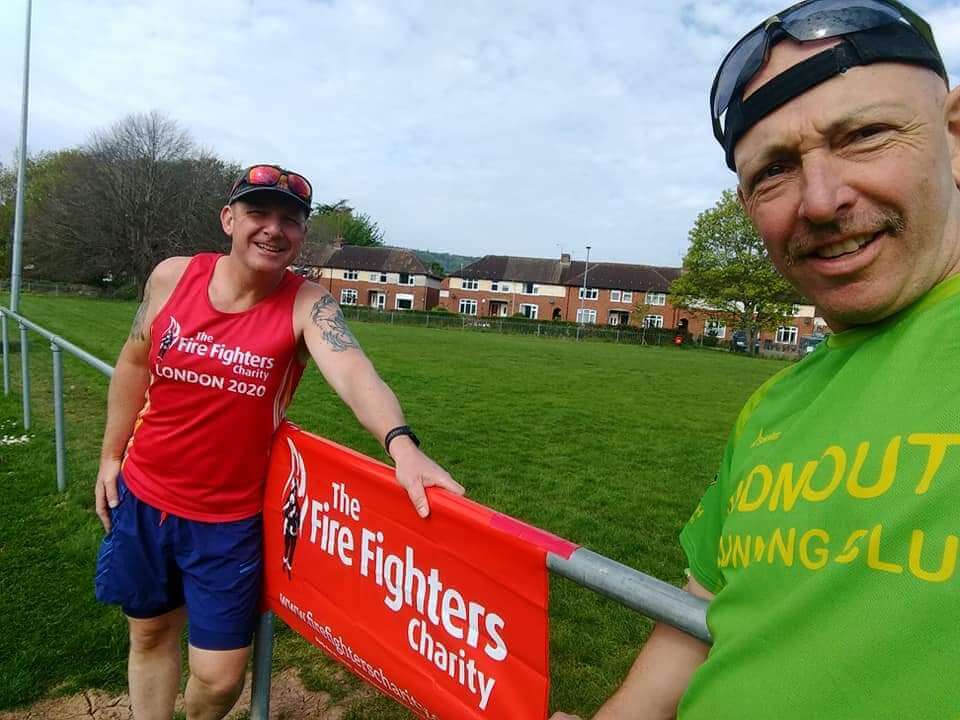 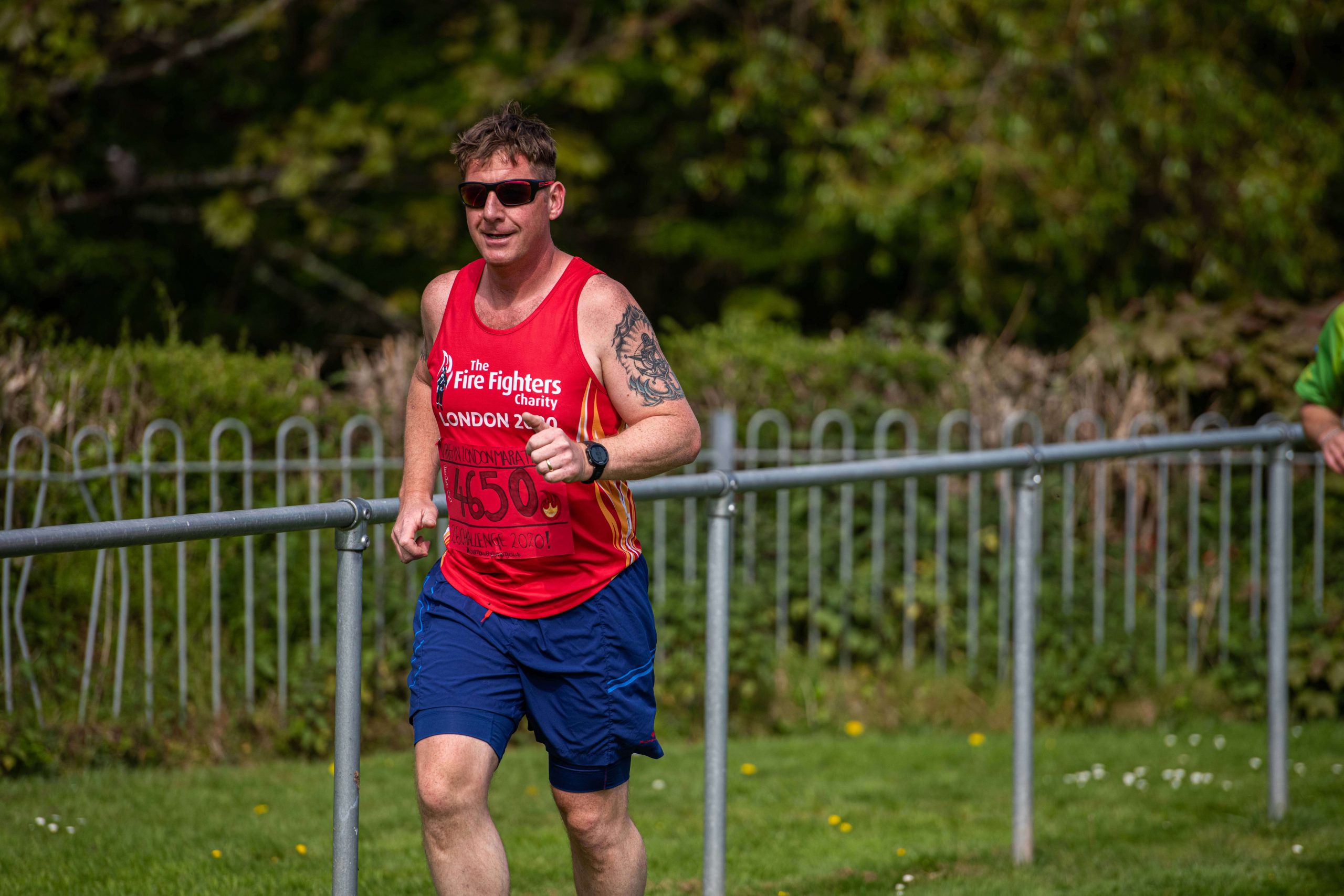 You can donate to Allan’s charity challenge for the Fire Fighters Charity here.

Driver escapes without injury after tree falls on car at Sidmouth