Wednesday, March 3
Trending
You are at:Home»News»Exeter»Exeter: Green light for 40 zero-carbon homes in Pinhoe despite traffic concerns

Plans for 40 zero-carbon ‘smart homes’ in Pinhoe, Exeter, have been given the go-ahead after the developer increased the number of ‘affordable’ dwellings.

City council planning chiefs approved the scheme – on land between Pulling Road and Church Hill – after debating the proposals for an hour last night (Monday).

Verto Homes had upped the number of affordable units from six to 10 following talks with the authority.

Exeter City Council’s planning police states new developments should be made up of 35 per cent of affordable homes.

Pinhoe councillor Trish Oliver raised concern over the plans and said: “I welcome a zero-carbon development, but not in Pinhoe. 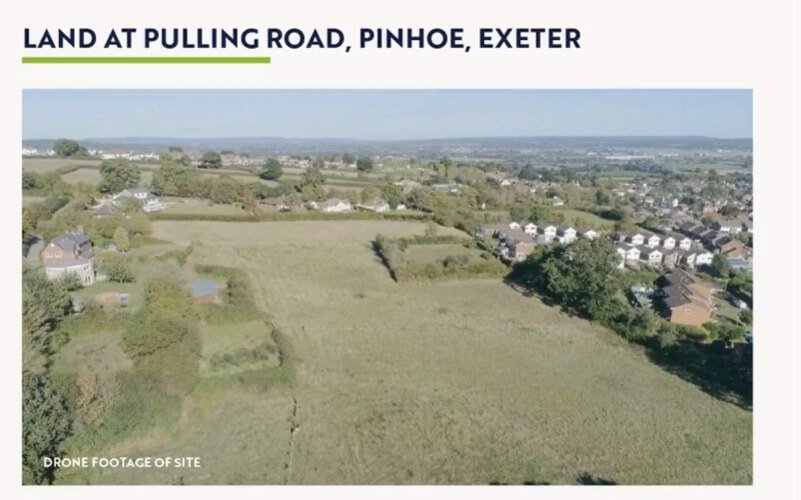 A drone image of the Pulling Road site in Pinhoe, Exeter.

“We suffer from increasing traffic congestion and decreasing air quality and this will be exacerbated by all the other developments.”

She called for the number of parking spaces to be reduced and the affordable housing allocation to rise to 30 per cent.

Fellow ward member Councillor Duncan Wood added: “This is a very interesting development and, in an appropriate location I would support it, but this in the wrong location.

“It will increase traffic flow that is already at capacity.

“This seems to be a development to be achieved at any cost, irrespective to whether it can be safely accessed or the traffic can be absorbed on a network already beyond capacity.” 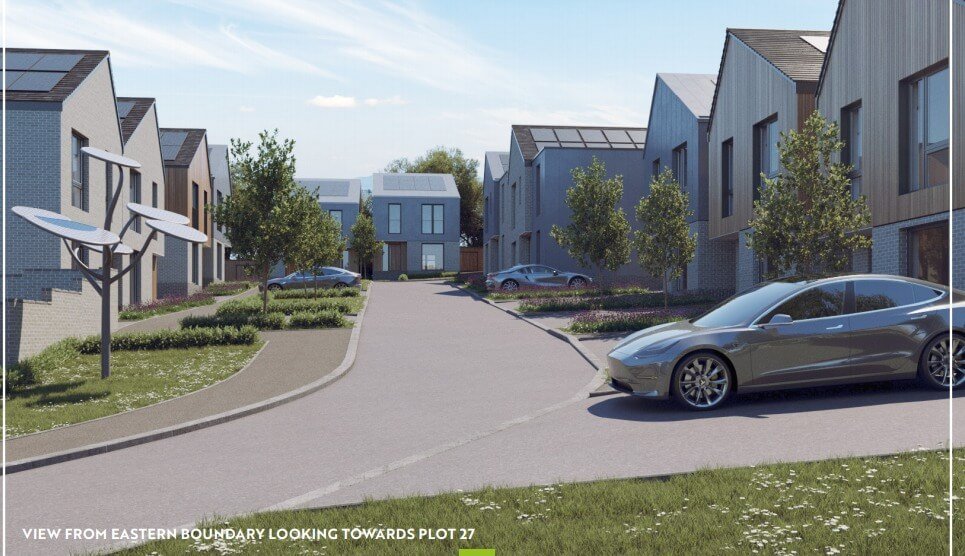 However, Devon County Council’s highways department raised no objection to the plans, much to confusion and surprise of the committee.

Cllr Amal Ghusain said: “I don’t understand the logic behind highways allowing this to go ahead.”

Cllr Phil Bialyk added: “I don’t think it is satisfactory in my view, and it will increase traffic quite a lot. I don’t get how highways have reached the decision that it is OK.”

One way in which the traffic impact may be mitigated was by an improved bus service to the area. 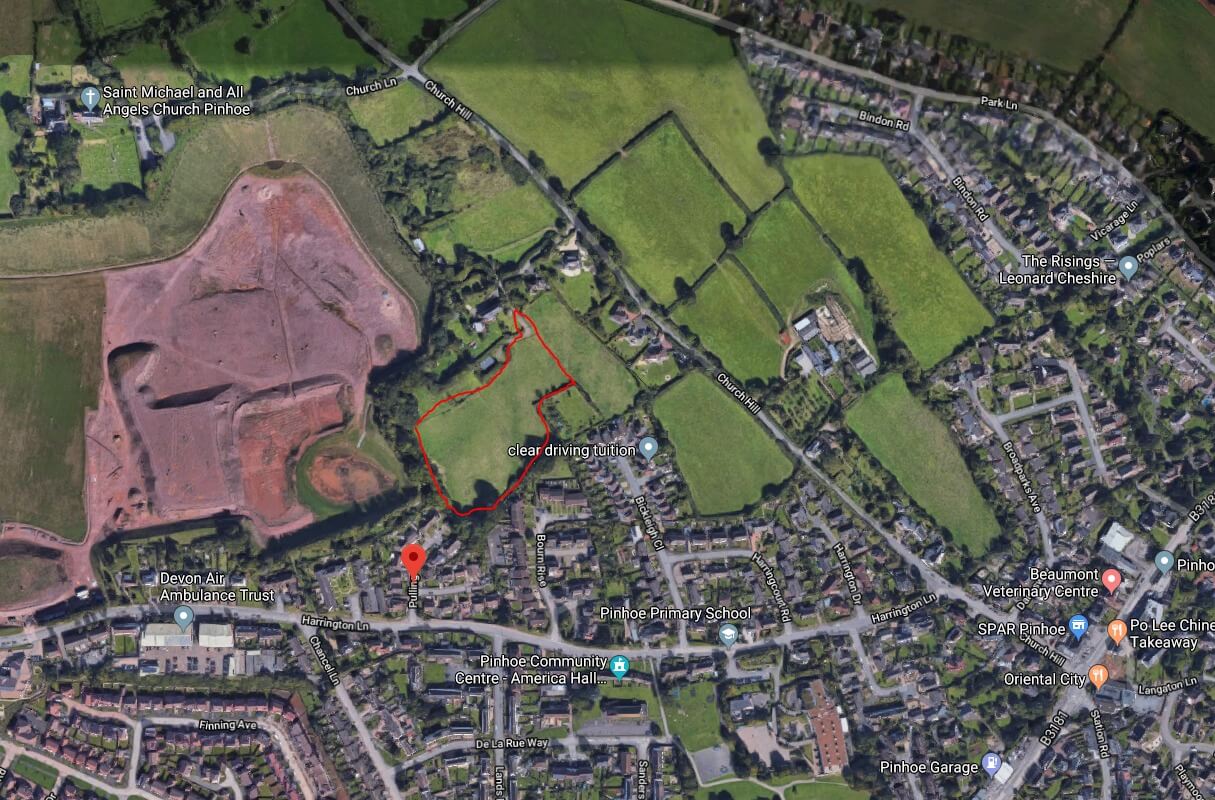 In red, a rough outline of the proposed development site. Image: Google Maps

But Cllr David Harvey said: “I am convinced that the bus service will not return to anything like it did before the Covid-19 crisis.

“Highways are saying that there is no problem because it can be dealt with by buses, but they have no possibility to use them.

“I will vote against this as there will be traffic congestion – as the way Devon suggest it will be mitigated won’t happen.”

Cllr Rachel Sutton said that, while the committee may not like and may disagree with the highways advice, there are not any reasons that they could justify refusal of the scheme on those grounds.

She added: “Building around the edge of communities will always will be unpopular.

“As cities expand, people on the edge don’t like it, even though their homes were probably objected to by the people who lived two fields before them.

“There is a lot to like about this. The quality of the houses is commendable and I like zero-carbon homes as that is what we need. This is finely balanced but I am broadly in favour.” 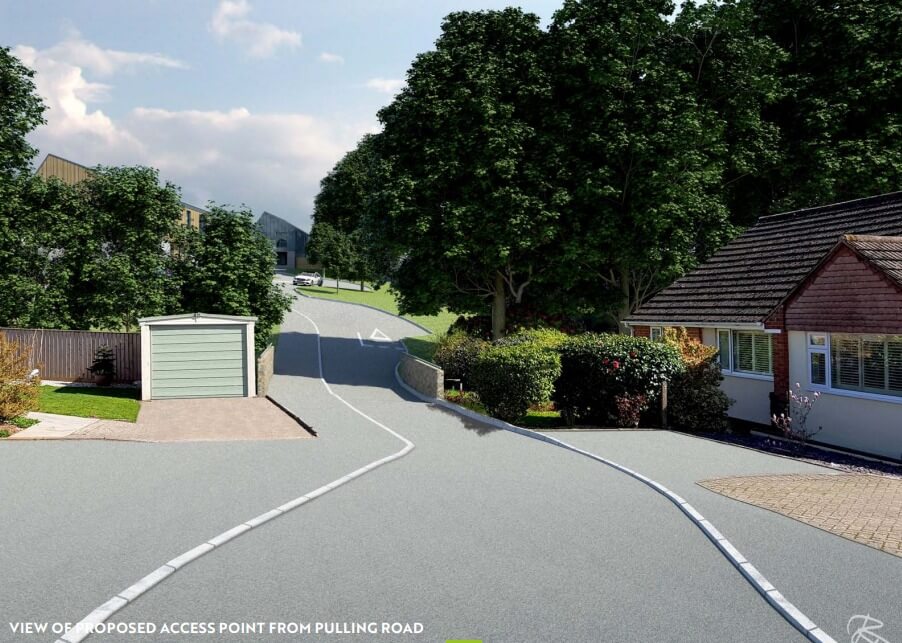 “Opposing on the traffic isn’t going to work, so this should go ahead, and I can’t see that an extra six per cent will create extra traffic issues.”

Darren Summerfield, associate director of LRM Planning, added: “We have made a significant number of concessions and will be accepting a reduced profit, but this shows the desire to deliver zero carbon homes.

“This will provide both open market and affordable homes and help meet the council’s carbon neutral aims.”

Councillors voted by nine to three, with one abstention, to approve the scheme.