Friday, May 27
Trending
You are at:Home»News»Budleigh Salterton»PHOTOS: Budleigh thank you to NHS is set in stone as popular pebble art returns to beach

Budleigh Salterton has set in stone its thanks to the NHS with a pebble art tribute on the beach.

The accolade in praise of frontline NHS workers dealing with the coronavirus has earned applause from passers-by.

The design, made entirely from stones, is the creation of Budleigh’s own ‘Banksy’ – beach artist Simon Wood who for several years has wowed visitors with his unique designs.

After a break from beach art Simon, of Armytage Road, Budleigh, has been inspired to once again pick up the pebbles – this time echoing national feeling, setting it in stone.

The NHS pebble tribute has prompted Simon to dream up some new designs for the summer. 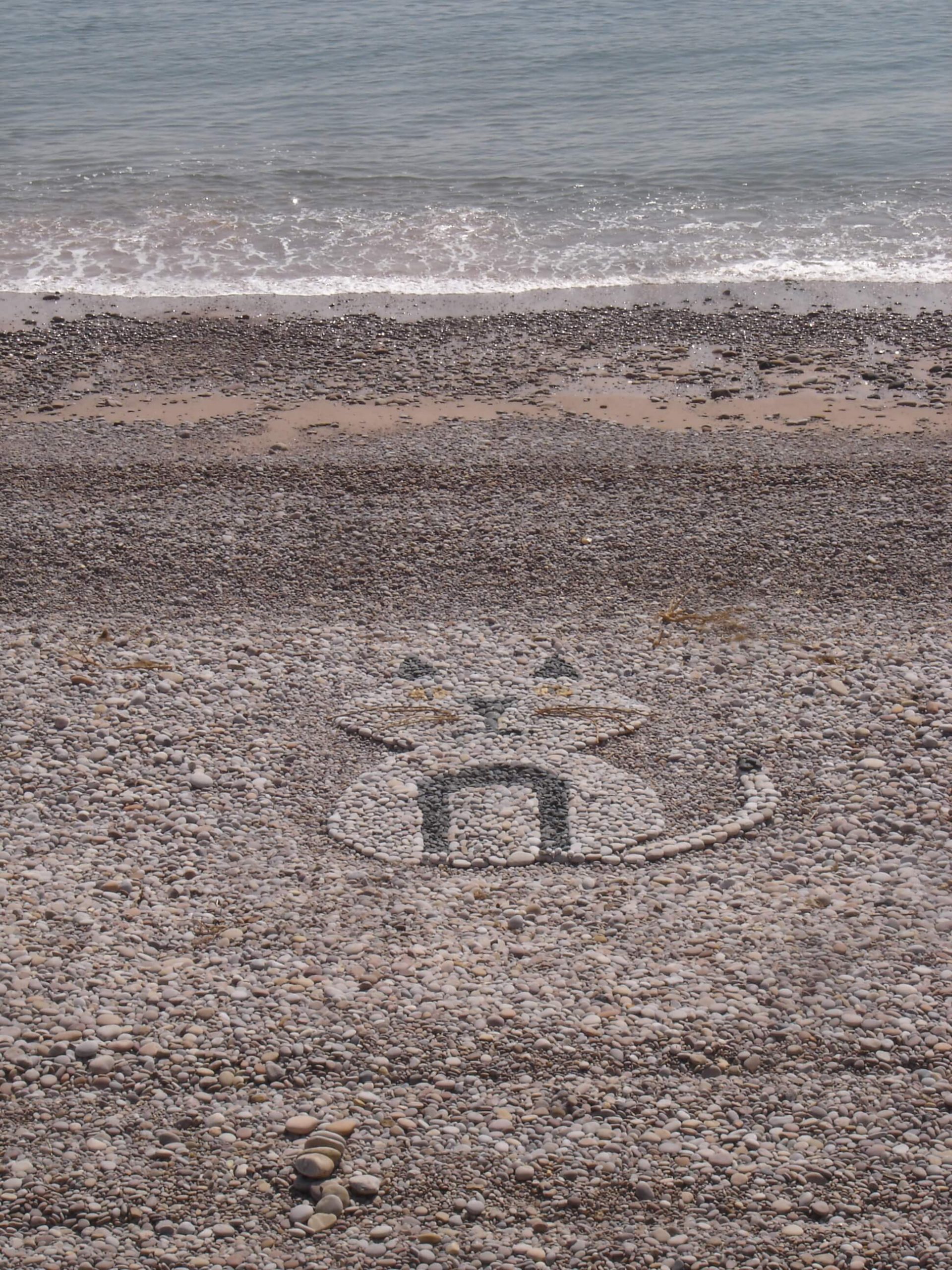 Animal-lover Simon’s latest design, in memory of his cat, Gracie.

Simon, whose art has decorated Budleigh beach above the shoreline most summers since 2014, said: “It took me a week, in stages, to complete and I have had small rounds of applause and numerous thumbs up from walkers up on the foot path at Steamer Steps, and shouts of ‘well done’.

“It felt good because it made people feel good.”

Simon was dubbed ‘Budleigh’s Banksy’ several years ago when his designs first appeared on the beach and sparked the hunt to identify the mystery artist.

In recent years Simon’s stone designs were made with love for people close to his heart, past and present.

Simon, a gardener, began his popular beach art around six years ago, heading for the shore as therapy after breaking his hand, which made day-to-day work difficult.

Using his left, uninjured hand, he picked up and placed hundreds of pebbles into large designs.

His beach creations have included a panda, made with love as a tribute to his long-term partner, Bridgee Malone, who died suddenly in August 2011.

The couple’s home had scores of the panda ornaments, pictures and trinkets as a nod to a private joke they shared throughout their relationship.

Favourite designs of Simon’s were a bumblebee made from yellow and hard-to-find black pebbles.

This year he has planned some new designs, but is remaining tight-lipped about what they will be, apart from to say expect animals and abstract art.

Some of the designs, which are sketched out carefully on paper, take weeks to complete. 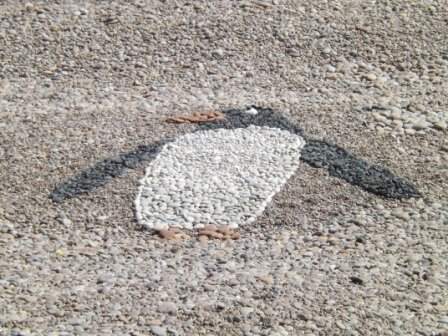 Some of Simon’s earlier designs. All photos: Simon Wood 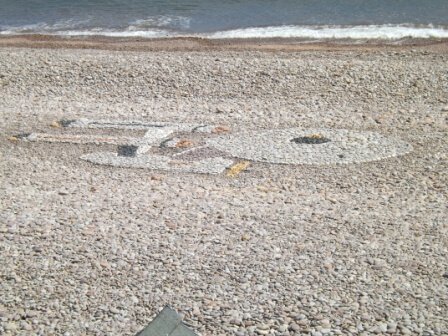 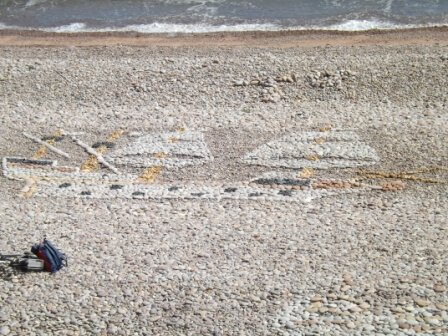 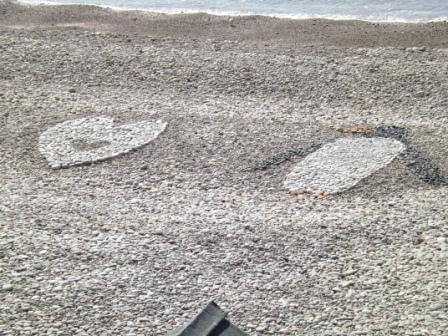 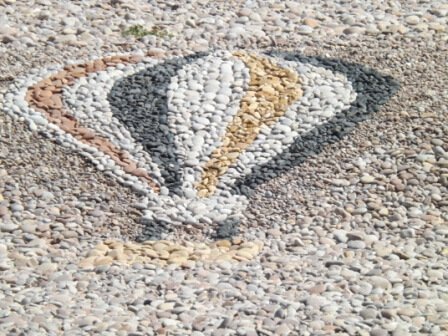 Simon said if his knees hold up to the challenge, he plans to work on his designs throughout the summer.

And he will make pebble tower sculptures, which he can knock down overnight and reconstruct quickly the following day.

Simon said: “I can tower them up quite quickly between working on whatever I am working on.

“The last couple of years the bit of beach I have worked on hasn’t been left in the best shape for me to work on, with the winter storms.

“The level I work on, it was too narrow. It sloped down too much.

“In previous years when I was working there it was a very different area to work on.”

“People walking along the top probably wouldn’t notice, but It’s quite narrow this year.”

He added: “I will be taking it one design at a time. If the body holds up, I will keep going through the summer. I know people will be pleased to see them back.” 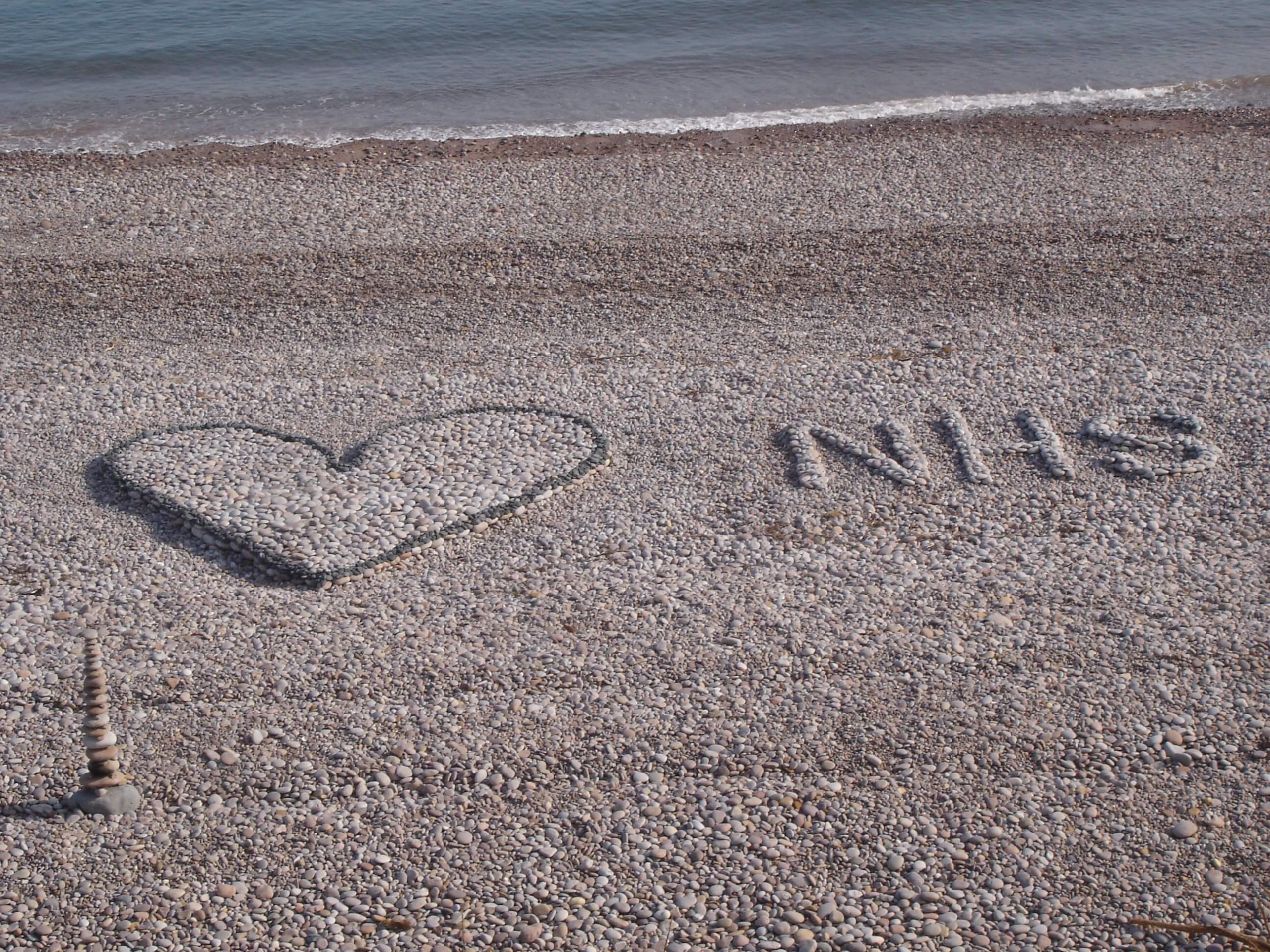 The NHS tribute on Budleigh beach. All photos: Simon Wood. 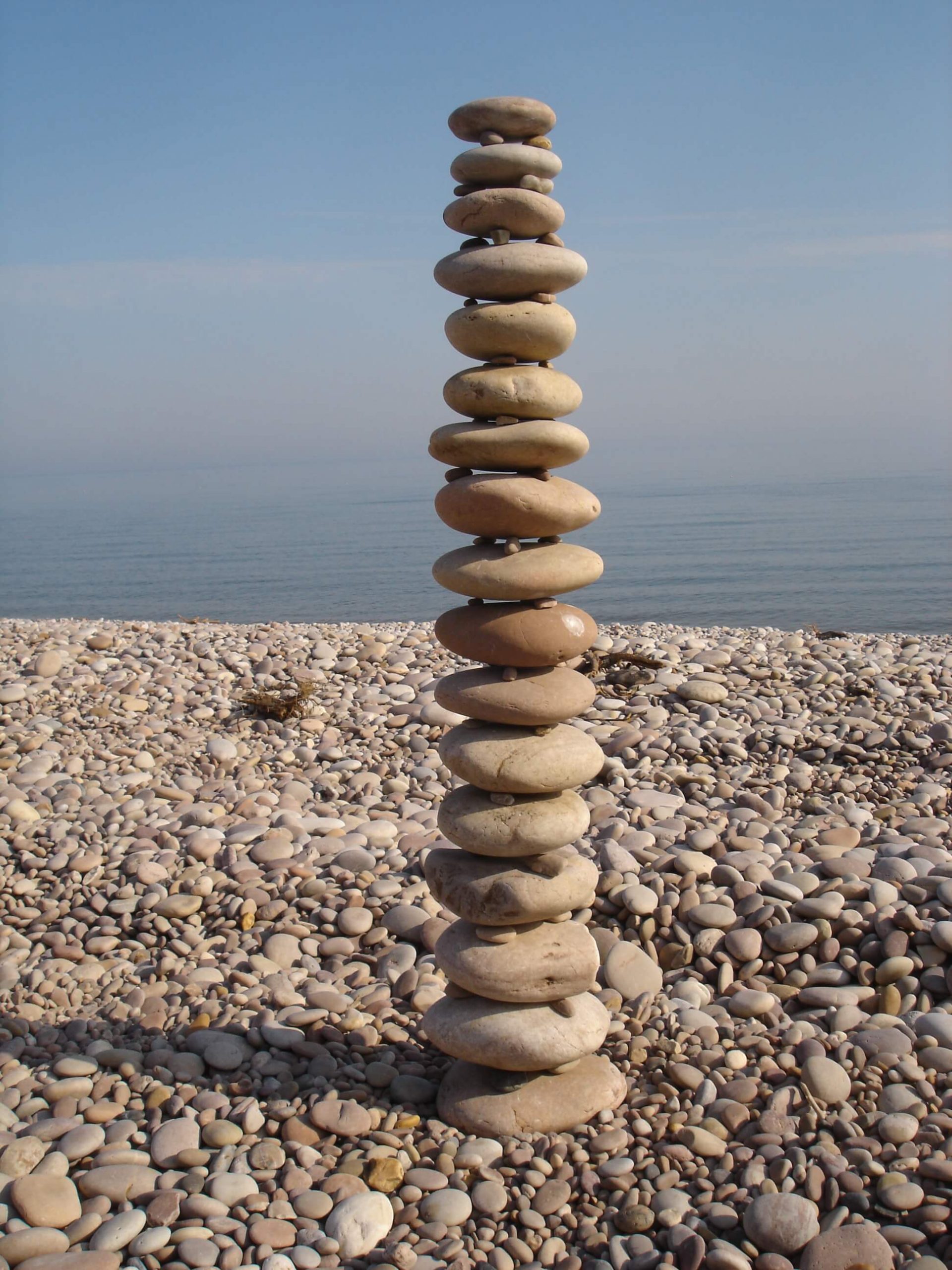 Some of Simon’s other pebble designs, past and present. 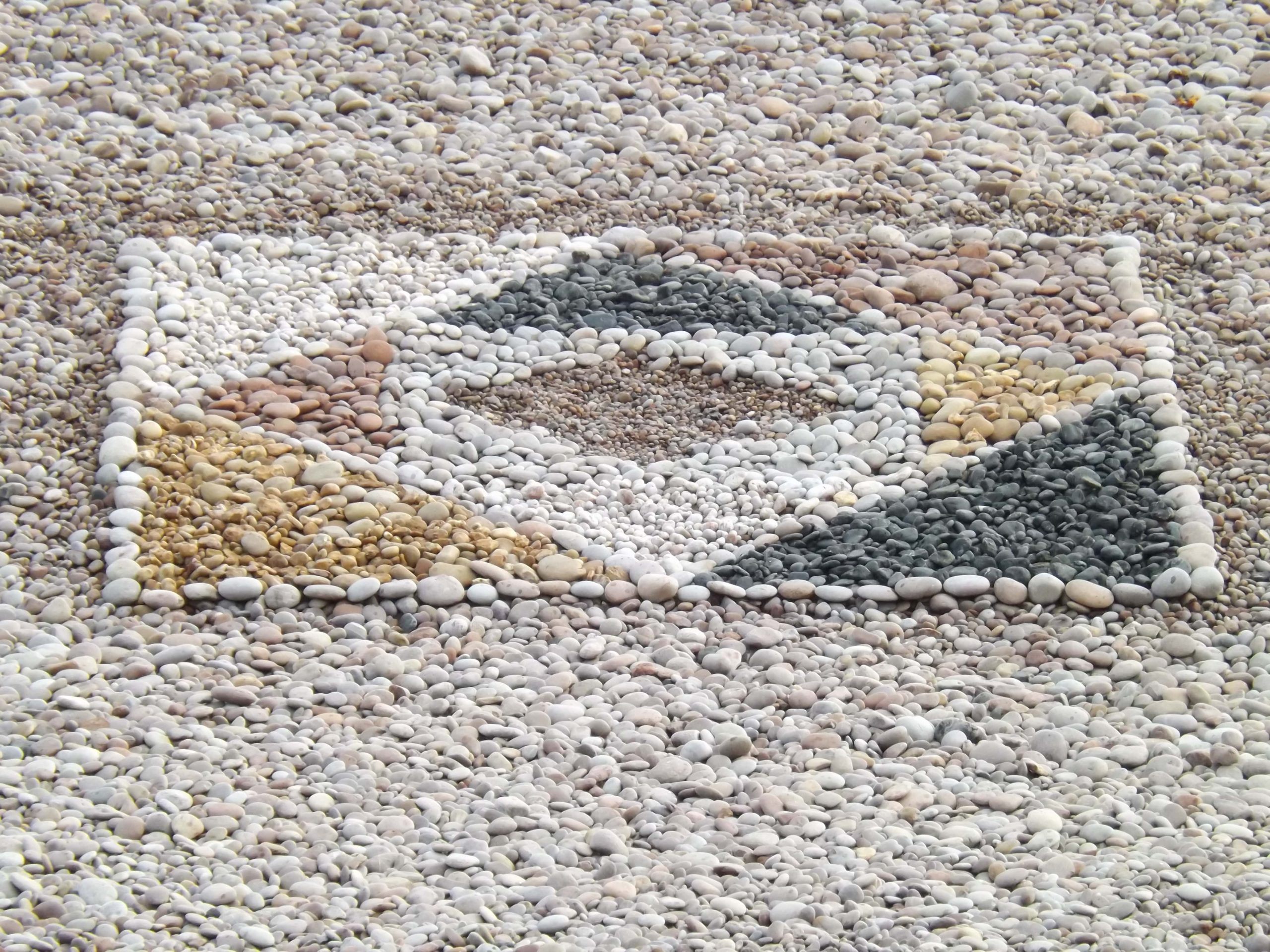 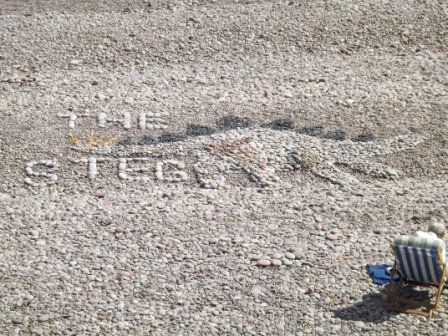 In previous years beach visitors have tried to guess what the finished designs will be as they take shape, watching Simon scour the pebbles for hundreds of stones the right size, shape and colour.

His beach art has touched the hearts of scores of strangers and has been enjoyed by hundreds of holidaymakers who have visited Budleigh from across the world.

When Simon told a curious pensioner his reason for recreating the Ark Royal had been led by thoughts of his son who was in the Army, he learned the stranger had been the Chaplain of the old Ark Royal aircraft carrier.

And when Simon went to the top of Steamer Steps to take an aerial look at his finished pebble elephant, he spotted a woman entranced by the design.

She told Simon how she had lived in Thailand, cared for a group of elephants and brought up a female’s calf.

His pebble art has raised more than £900 for the National Deaf Children’s Society (NDCS), after Simon asked passers-by to donate if they enjoyed the al-fresco exhibition, which included the Starship Enterprise.

The spacecraft took three weeks to make, baffled a lot of onlookers as Simon started with one engine then the other beneath. Only one visitor guessed the design ahead of its completion. 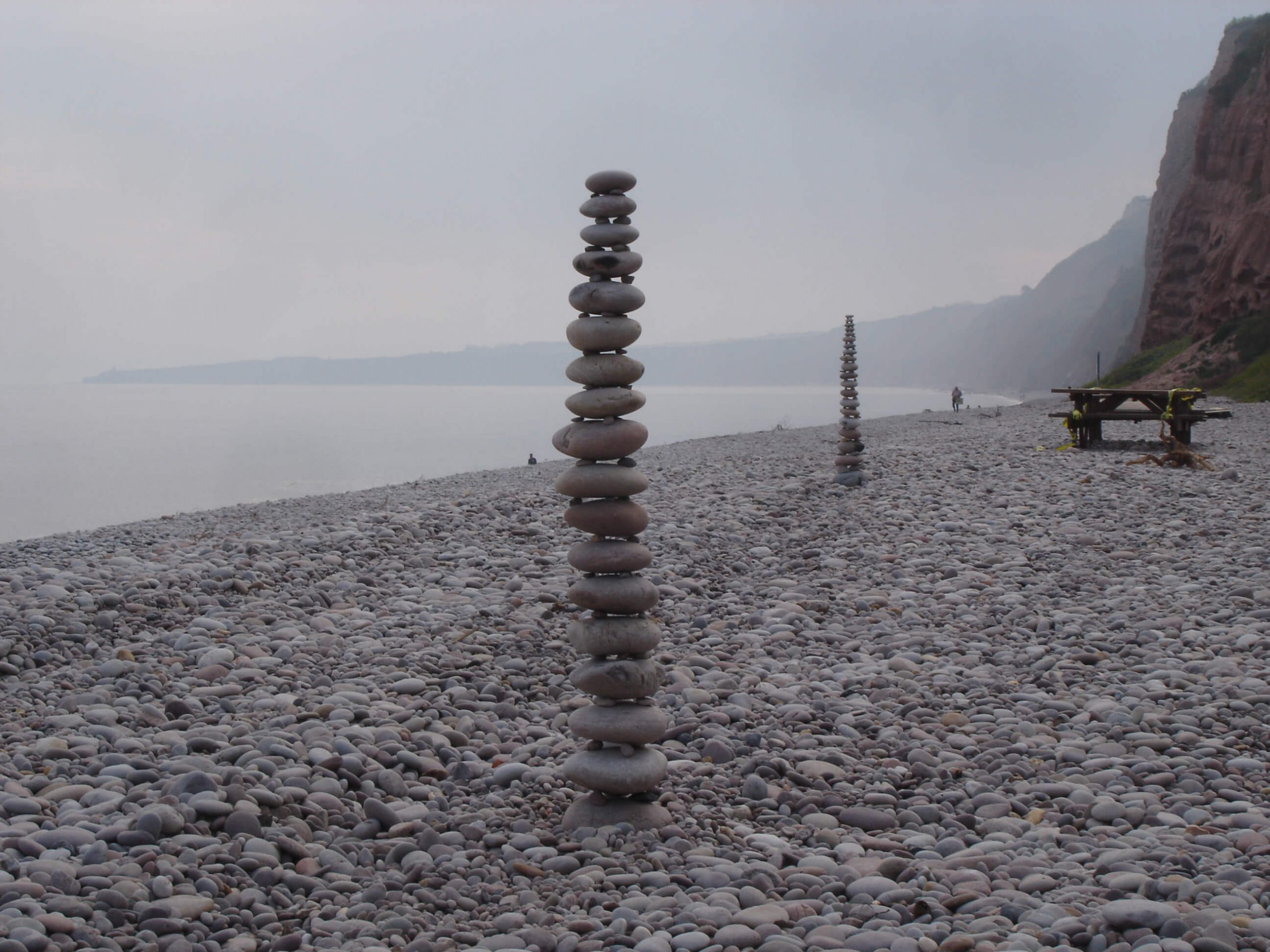 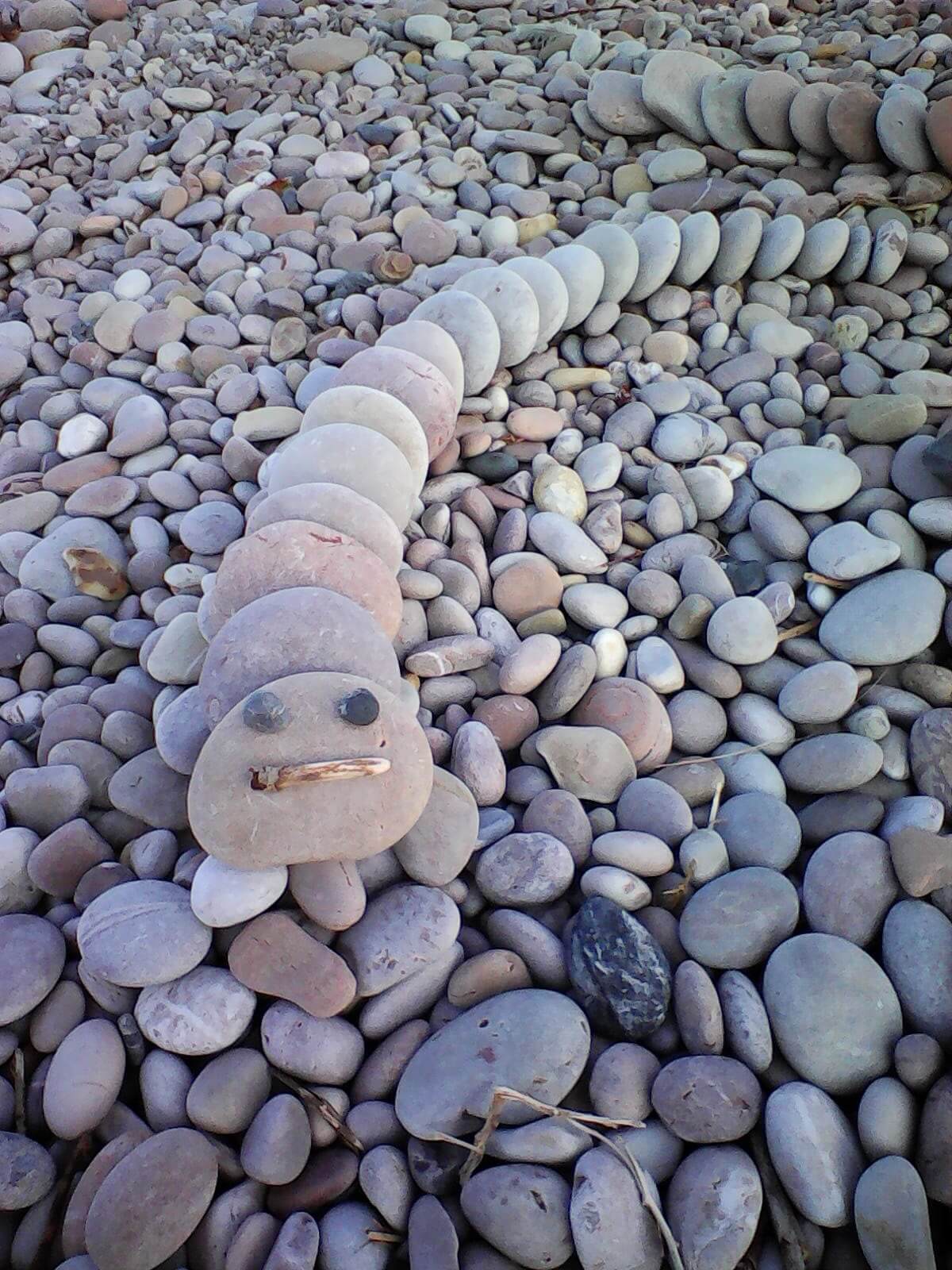 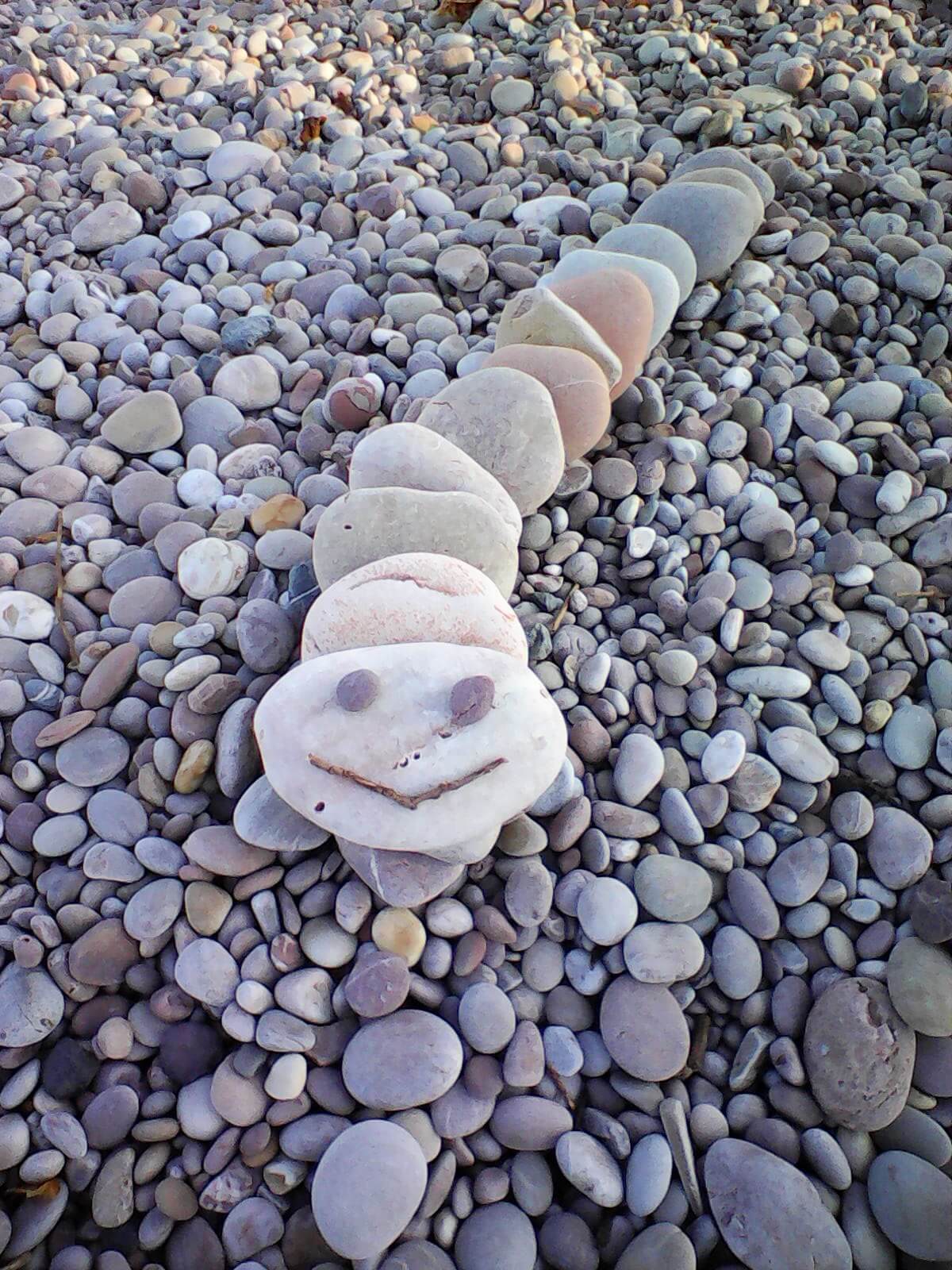 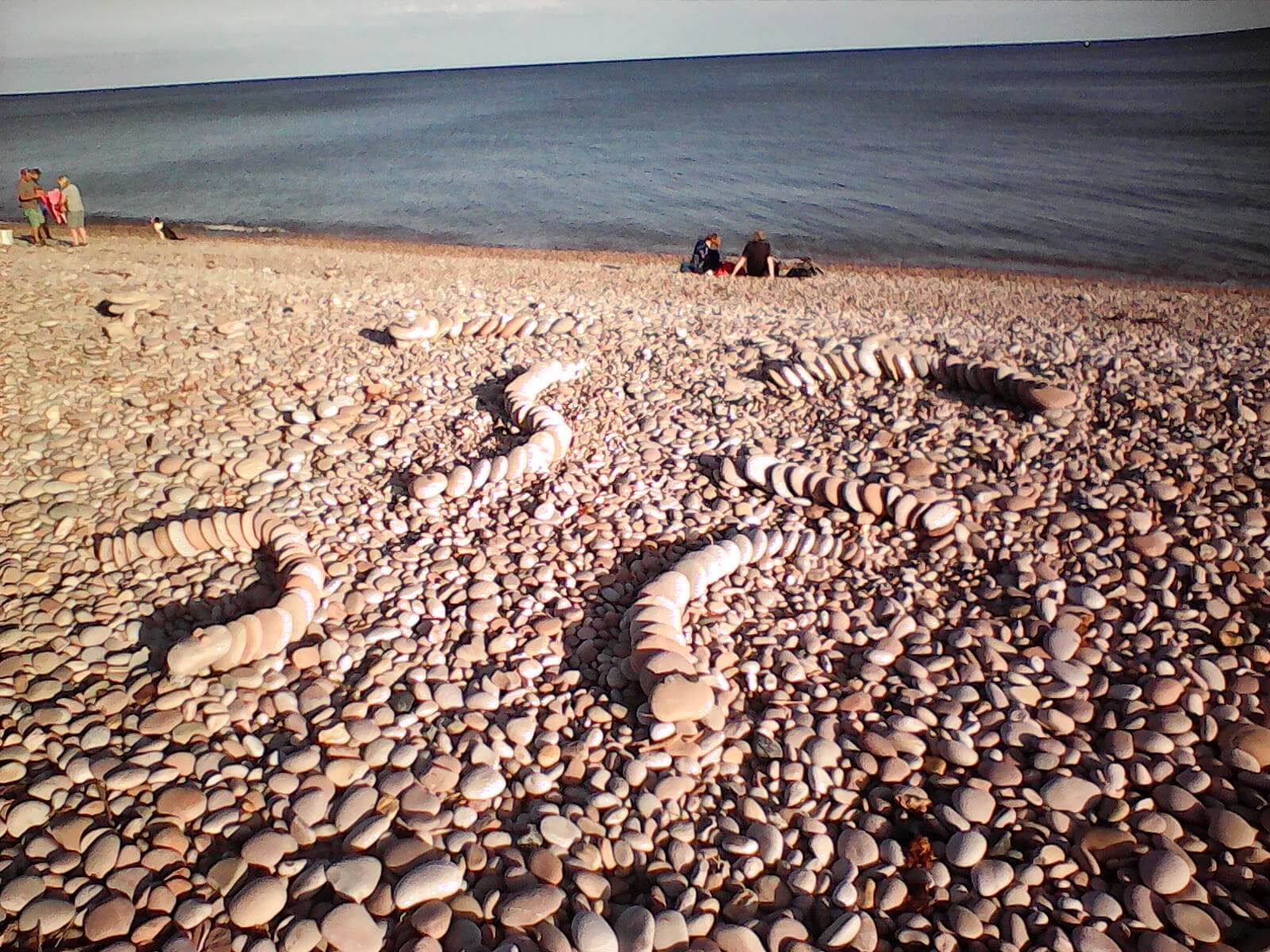 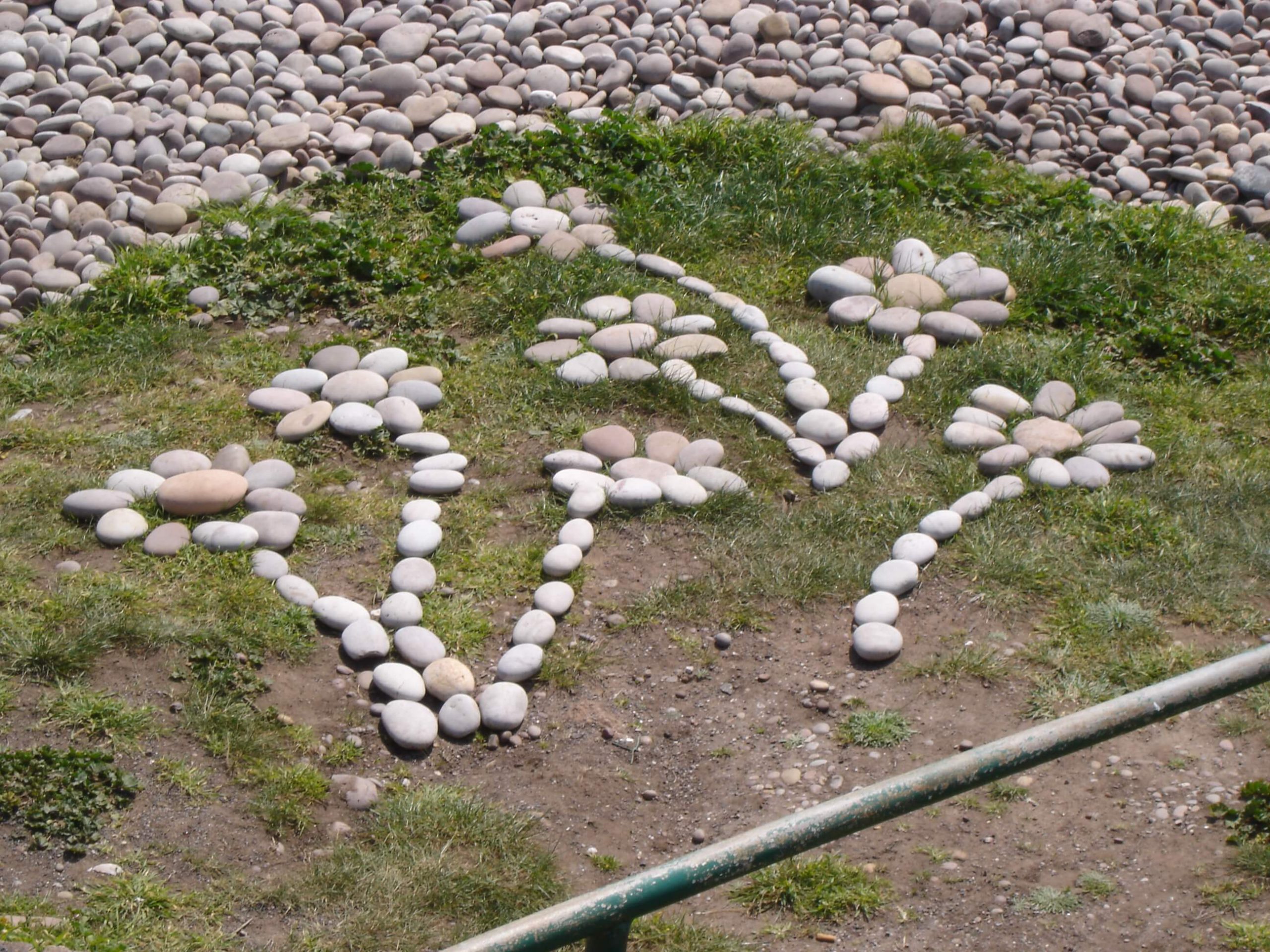 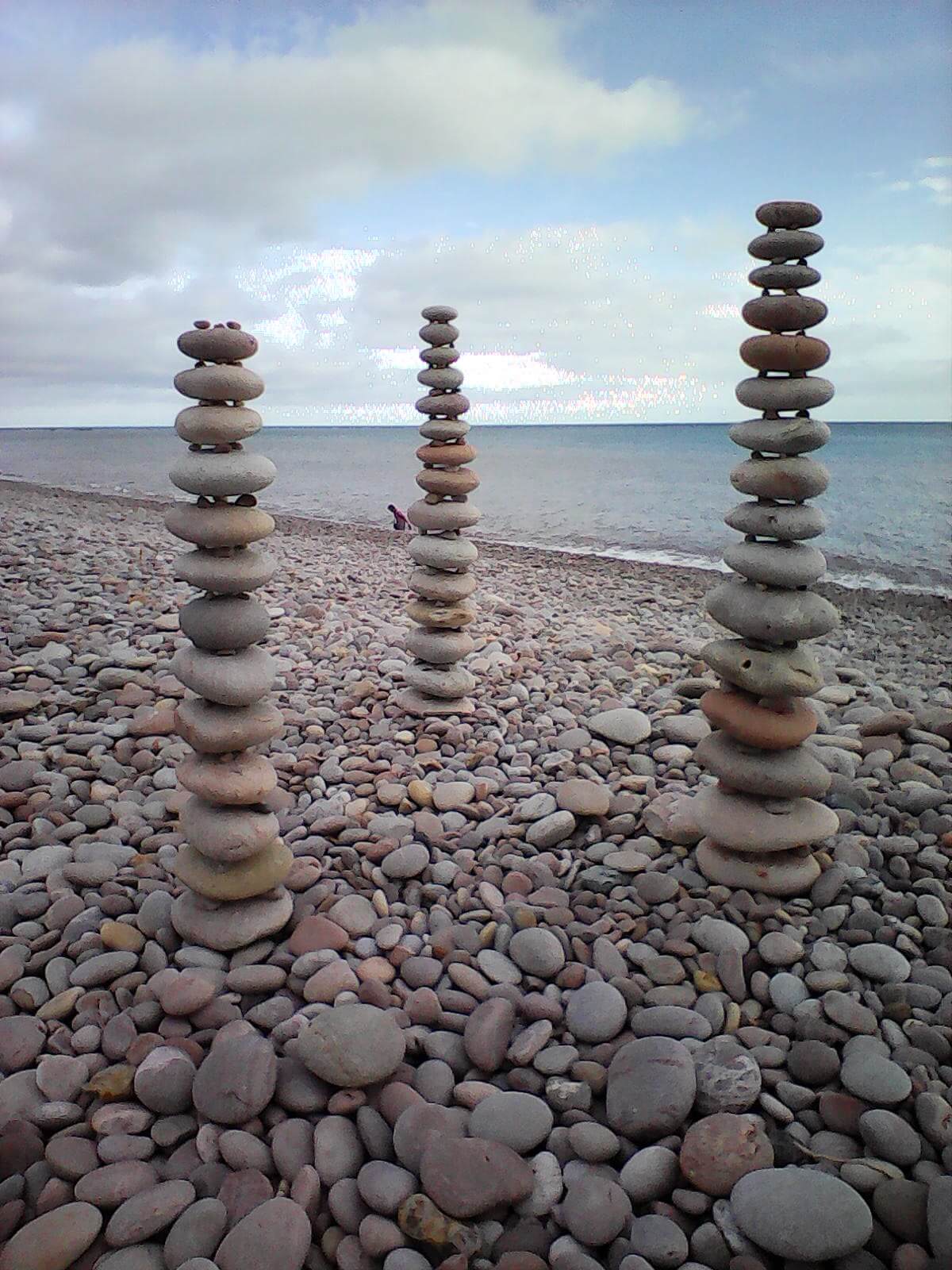 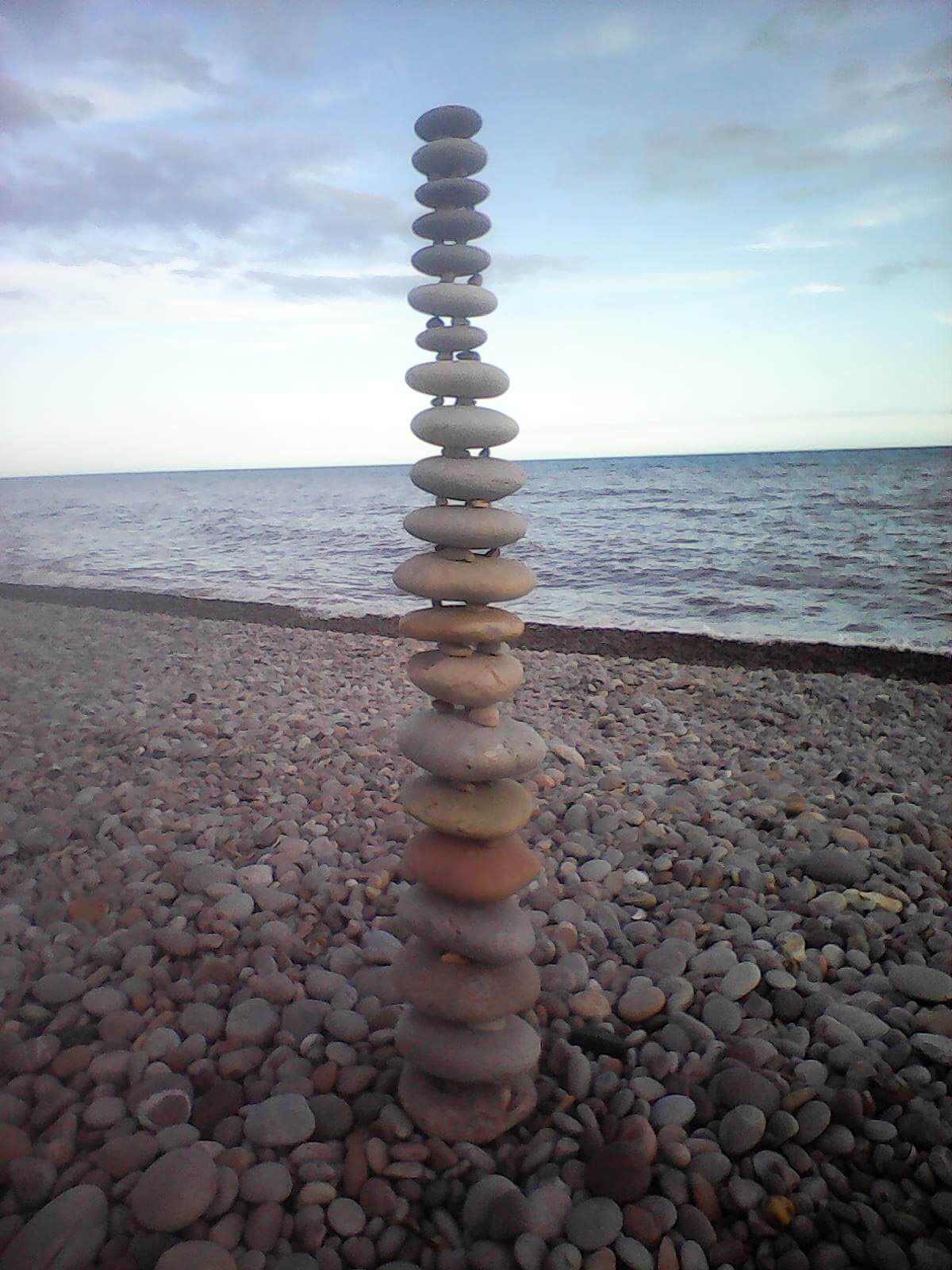 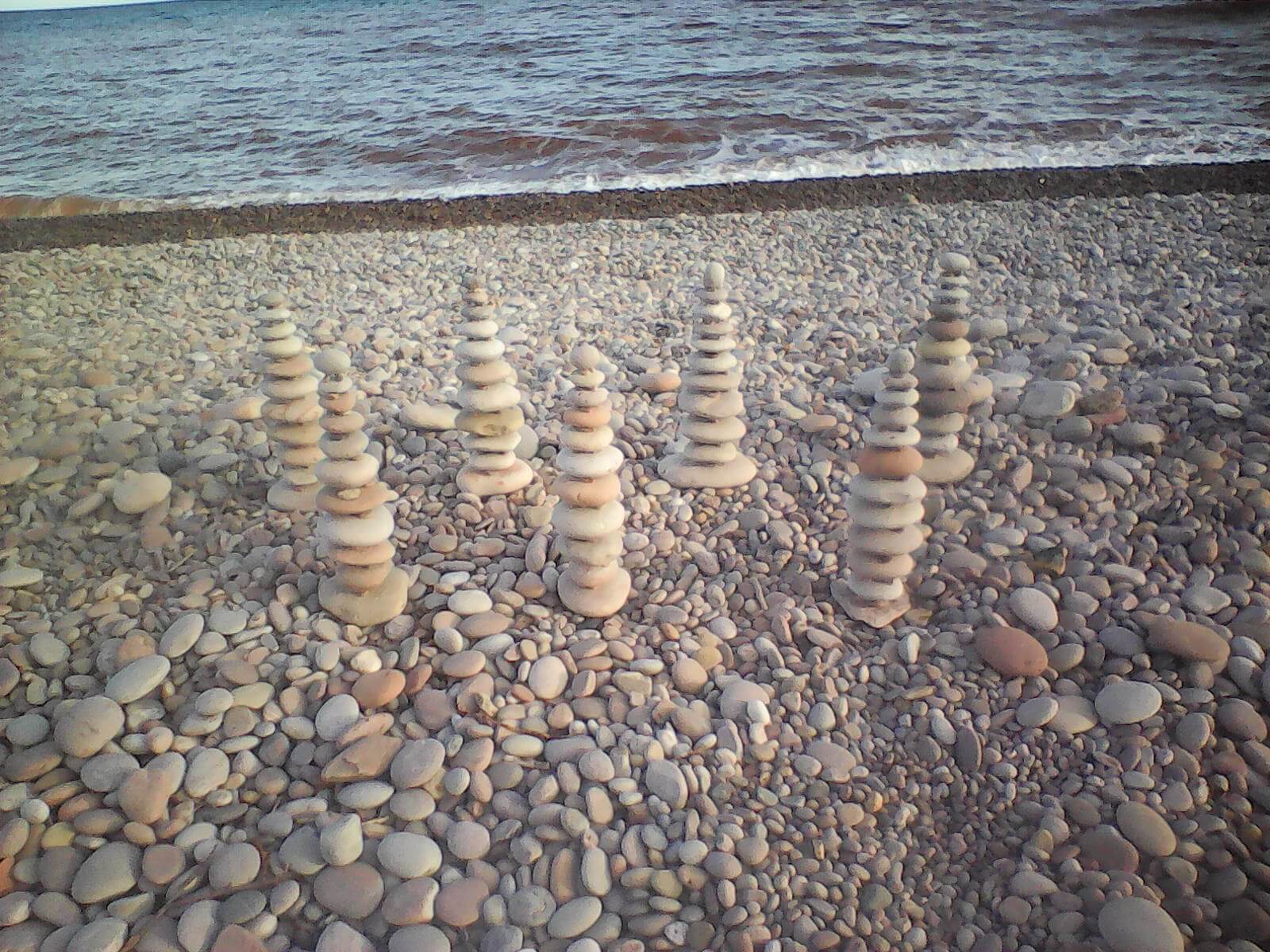 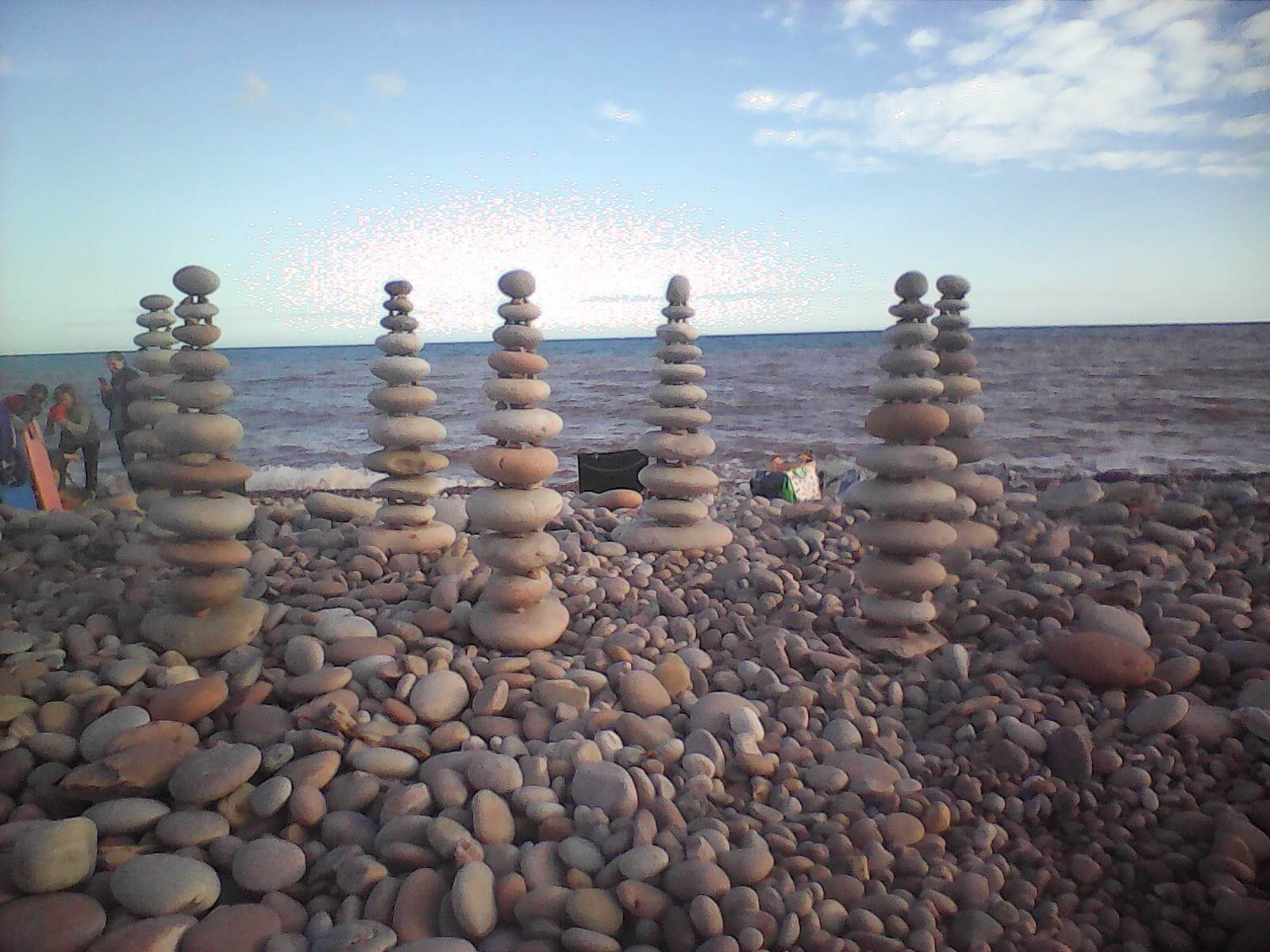 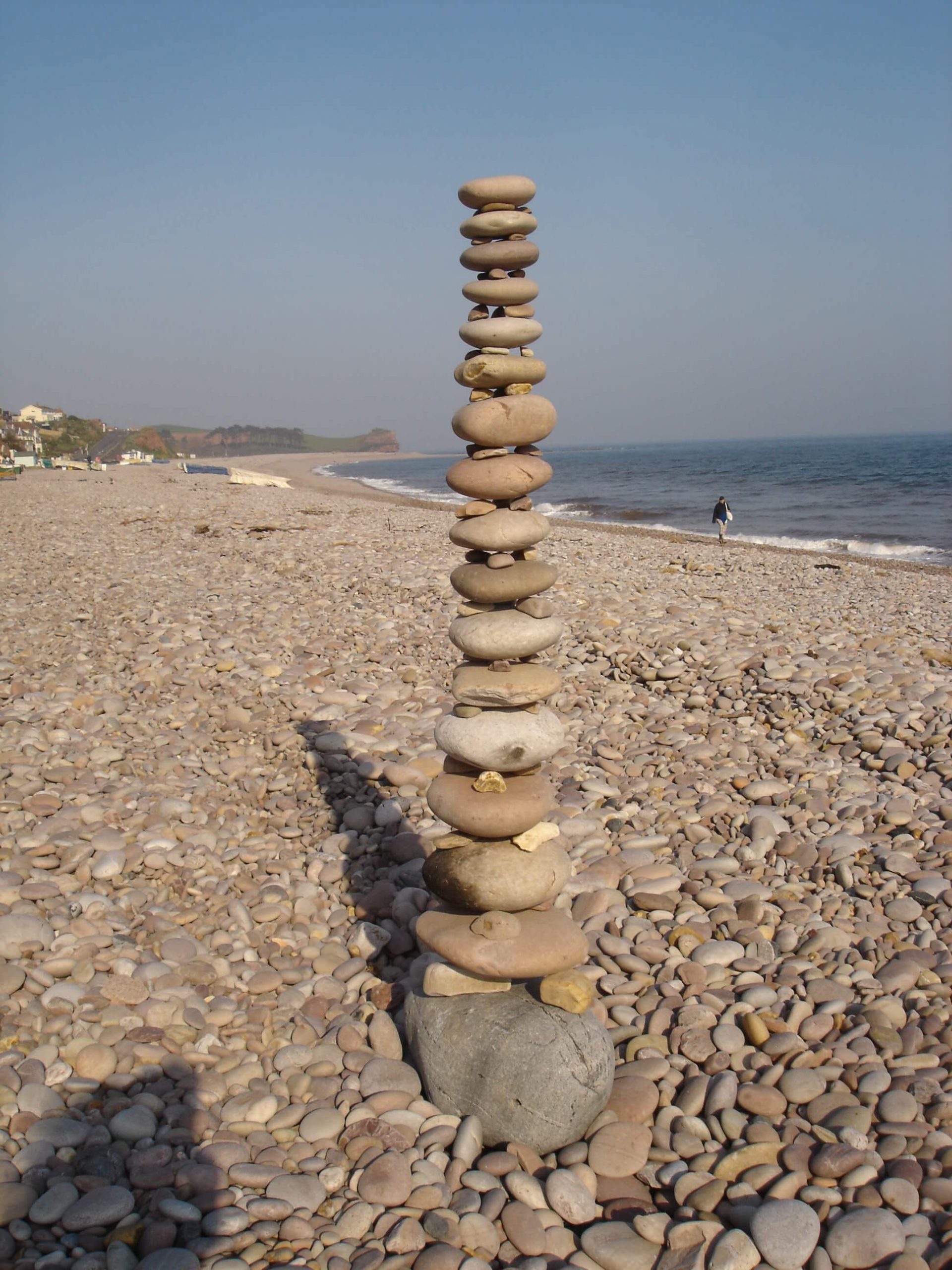 Often his pebble art highlights Budleigh’s culture and heritage. In past years, to coincide with a Fairlynch Museum exhibition, Simon created a tribute to Budleigh’s ‘adopted son’ On the Busses star, Reg Varney, who retired to the town.

He kick-started his 2015 collection fashioning a dinosaur from stones – The Steg – plus a galleon to coincide with Budleigh Salterton Fine Art Society’s latest project.

Simon said at the time how stormy winter weather had claimed back part of the beach, restricting the depth of the pebble shelf where he worked, leaving him less room than the previous year.

In 2016 youngsters from St Peter’s Primary School joined the outdoor artist, helping him create a shield on the beach – complete with the school’s logo, to link in with a pupil project.

The designs remain on the beach throughout the summer, with Simon tending to any scattered outlines to keep the images crisp.

He accepts with a heavy heart when the winter storms arrive and wash the pebble art away.

Vandals trashed the pop-up gallery in 2016, leaving Simon ‘upset’ and the town shocked as pebbles were kicked around, images destroyed, and rearranged to form phallic symbols.