An Australian historian and author is searching for descendants of a distinguished Royal Navy captain who died in retirement in Honiton in 1881.

Author and historian Frank Uhr, from Brisbane, is keen to trace any descendants of William Jolliffe for his latest book about the Frontier War.

Frank hopes his appeal for help will unearth documents, church records, log books, or diaries written by Jolliffe, that may remain in Honiton.

Frank, who last year co-wrote The Battle of One Tree Hill, focussing on the Frontier War in the country west of Brisbane, said: “My next project to do a similar job on The Wide Bay District, north of Brisbane and includes Fraser Island and Maryborough.

“This was pretty much unknown until four men, including William Kynaston Jolliffe, rowed into groups of very hostile Aborigines, and were lucky to make their escape. That was early 1842.

“Two of the four in the boat were known to us here, but Jolliffe and Walter Wrottesley – a son of Lord Staffordshire – are almost unknown to us.”

Frank added: “My hope is that he left his log books or diaries, and in those we can learn more about him and his time here in 1842-3.

“So are there descendants, or are his logs in the church he is buried in, or in a museum?”

He added: “I am looking to see if there was an obit for RN Captain, William Kynaston Jolliffe who died in retirement at Honiton in 1881, after a long and distinguished career in Royal Navy.

“I am after some information – maybe there still are Jolliffe descendants still in the area.” 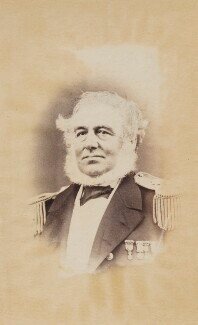 So far Frank’s search has uncovered William Jolliffe was born in Southampton in 1814 to John J and Maria Kynaston.

He joined the Royal Navy at the age of 14 and passed his lieutenant exams in May 1835 and emigrated to Australia in 1840.

Frank said: “For some reason he comes out here and becomes a sheep station manager, and then joined the exploration in Brisbane to Wide Bay.

“He escaped but then took 25,000 sheep right back into the same country and formed a station called Tairo, which he resigned from in early 1843 and went back to UK and the Navy.”

In December 1845 William Jolliffe was linked to HMS Flamer, then in 1854 he commanded HMS Arrow in Crimea.

After he retired, William Jolliffe went to live in Honiton, where he died in 1881.

If you have information that can help Frank Uhr with his book research, email frankuhr@bigpond.com