Coronavirus survivor Exmouth town crier Roger Bourgein last night rang his bell ‘for those that saved my life’ when he joined the country in applauding the NHS. 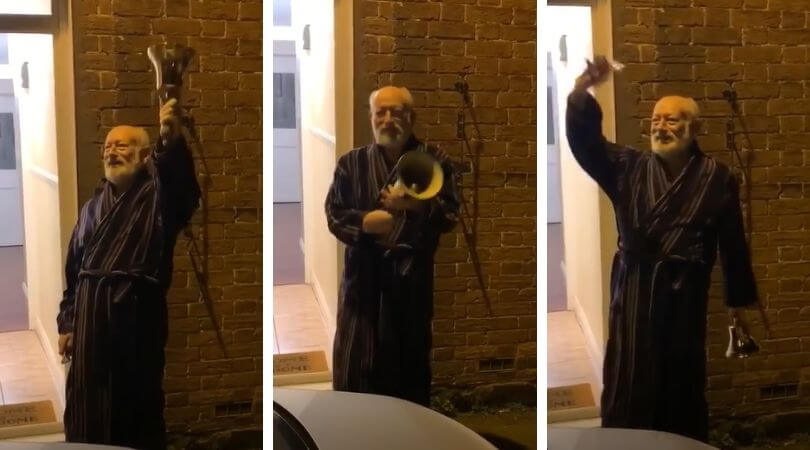 Exmouth’s town crier stood on his doorstep in his dressing gown to ring out his bell to thank the doctors and nurses who saved his life.

Applause, cheers and music erupted from the towns and villages of East Devon on Thursday night, when the UK came together at 8pm to pay public tribute to frontline coronavirus carers.

Roger, aged 72, survived the virus but not before his family was told on day six of illness there was nothing more medics could do.

Last night Exmouth’s town crier stood on his doorstep in his dressing gown to ring out his bell to thank the doctors and nurses who saved him.

“It was lovely,” he said. “It was for those that saved my life.”

Residents in their thousands from across East Devon stood in gardens and on doorsteps, joining together in the dark to make some noise.

Musical instruments could be heard, and saucepans were hit with spoons, as cheers and applause rang out from the streets, cul-de-sacs and gardens, when millions across the country showed their appreciation for those at the forefront of the fight against the coronavirus pandemic.

Sarah Luchetti, joined in the applause in Sidmouth with parents, John and Joy, and her daughter, Chloe.

She said: “It was very moving and it was almost as if we were making as much noise as possible for not just NHS workers but all who are giving so much to help the cause, whatever capacity, to hear our thanks.

“Big or small, every effort, every thought or kind word gives comfort to the vulnerable and those most isolated.

“Not everyone was out but there were some. In fact, we could hear better than we could see in the obscurity.”

Al Shaw, who recorded Ottery St Mary’s applause, said: “I just wanted to say thank you to the NHS because they have helped me so many times.”

Gem Watson, who filmed Cranbrook’s cheers and applause from Hayes Square, said: “It was great to feel so united. The sound was lovely.”

Joining the applause across Britain was the royal family, as the Duke and Duchess of Cambridge shared footage of their children, George, Charlotte and Louis, clapping and giggling in the garden of their Amner Hall home in Norfolk.

The Prime Minister Boris Johnson stood outside 10 Downing Street with the Chancellor, Rishi Sunak, to applaud and thank frontline carers.