Tuesday, March 31
Trending
You are at:Home»News»East Devon»‘We want to feel safe where we live’ – Woodbury mum’s plea to motorists to slow down as she has three cars written off in a year

A professional driver campaigning to get rid of the rat-run through Woodbury – after she had three cars written off in a year – says ‘we want to feel safe where we live’.

Mum-of-one Kim Bates, aged 55, of Broadway, claims she has been told by the authorities two people must die before new speed restrictions and traffic measures can be actioned in the village.

Since February 2019, three of Kim’s cars have been written off by motorists when they were hit outside her home – one was shunted onto the pavement after just six days of ownership.

Now Kim wants the council to act to slow traffic through the village, in the bid to prevent serious injury or death, saying ‘we want to be safe where we live’.

The county council said its records showed two non-speed related ‘slight’ incidents had been logged, and offered to arrange a site meeting.

Kim, a coach driver for 30 years, said: “People of this village are now fed up – as am I obviously – of being treated with speeding complacency and the disrespect of through-traffic, and those in authority.

“We are now taking action, with or without help, to stop two people being killed.”

She added: Hopefully we are going to have some sort of residents’ meeting and look at speed measures. It’s got to be practical and measured.

“I think they have to be told. This has got out of hand now.

“People say ‘they are insured’. It’s only a metal box. I get that. But it’s the stress and it’s the money you have to pay out before you get it back.”

Kim’s Citroen estate was wrecked and written off outside her house on February 1, 2019, when a car ploughed into it.

“My car was shunted approximately eighteen-feet into my neighbour’s car, which was pushed further up the road. It was parked legally,” she said.

Kim bought another car, and six days later, while it was legally-parked outside her home, a skip lorry crashed into it and insurers declared it a write-off.

“The driver this time said he was tired and was trying to avoid the traffic coming down Broadway and his brakes didn’t work,” said Kim. “I had this car for six days.

“Again, it was pushed up onto the pavement even though legally parked on the road.”

Kim’s latest car was wrecked on February 26 this year when a van smashed into it while it was parked on the road outside her home.

“This time it was another tradesman in a van,” said Kim. “This time he said he was tired. His mind went blank. He thought it was a line of traffic and the classic was ‘I was only doing 30mph.

“I’m now getting used to the excuses, the stress, and it’s becoming nerve racking just waiting for the bang. 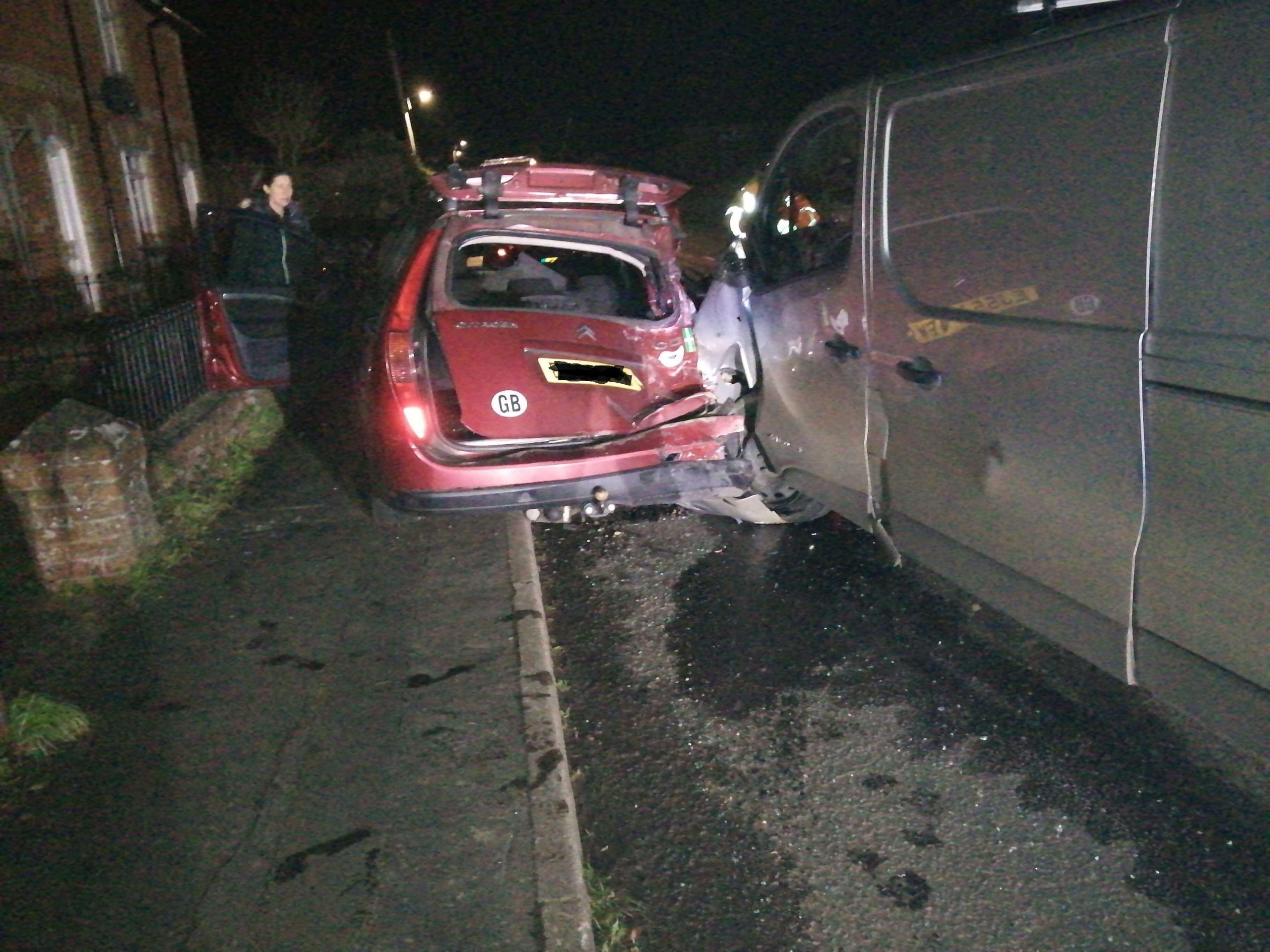 Since February 2019, three of Kim’s cars parked outside her home have been written off by motorists – one was shunted onto the pavement after six days of ownership. 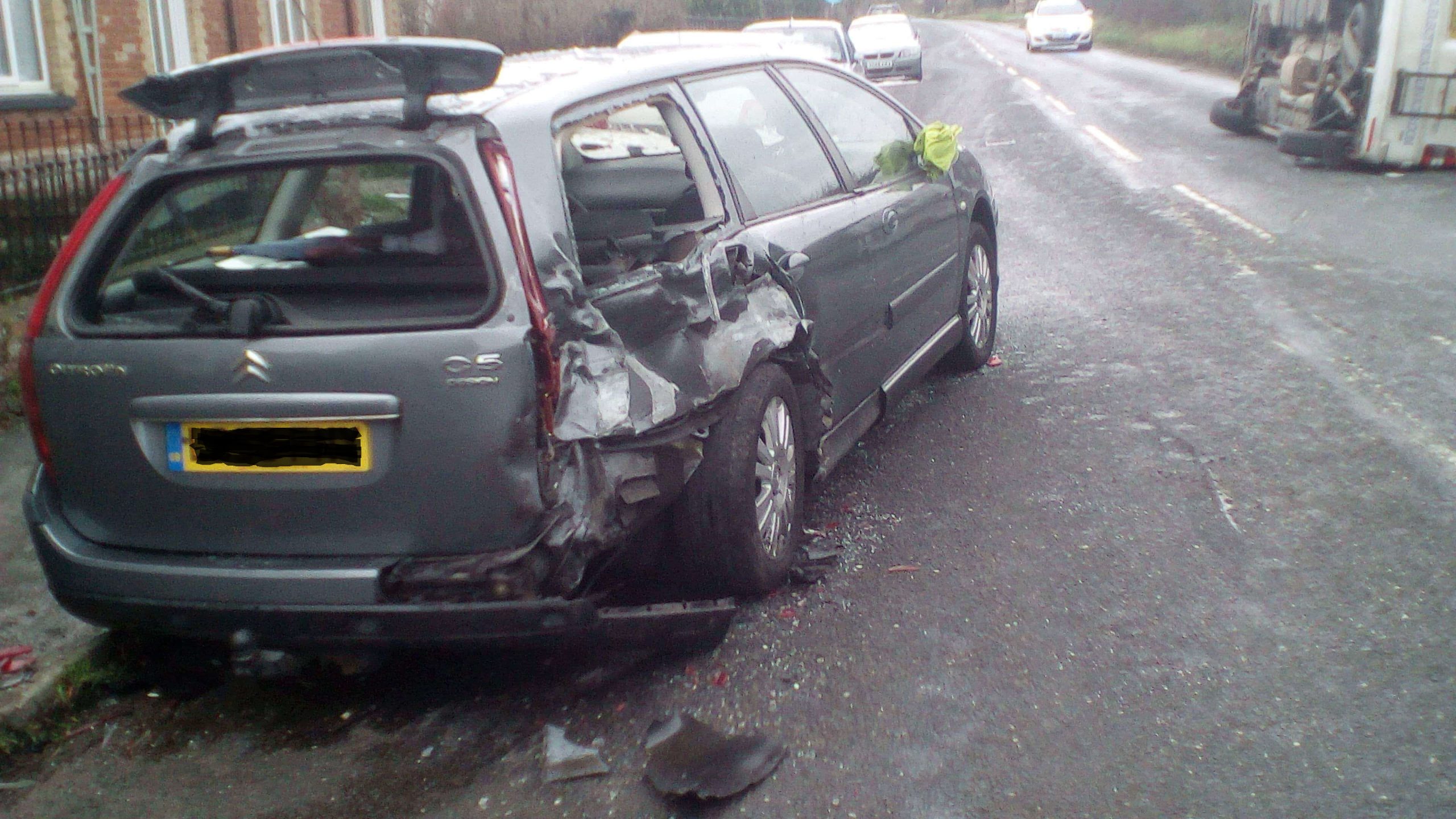 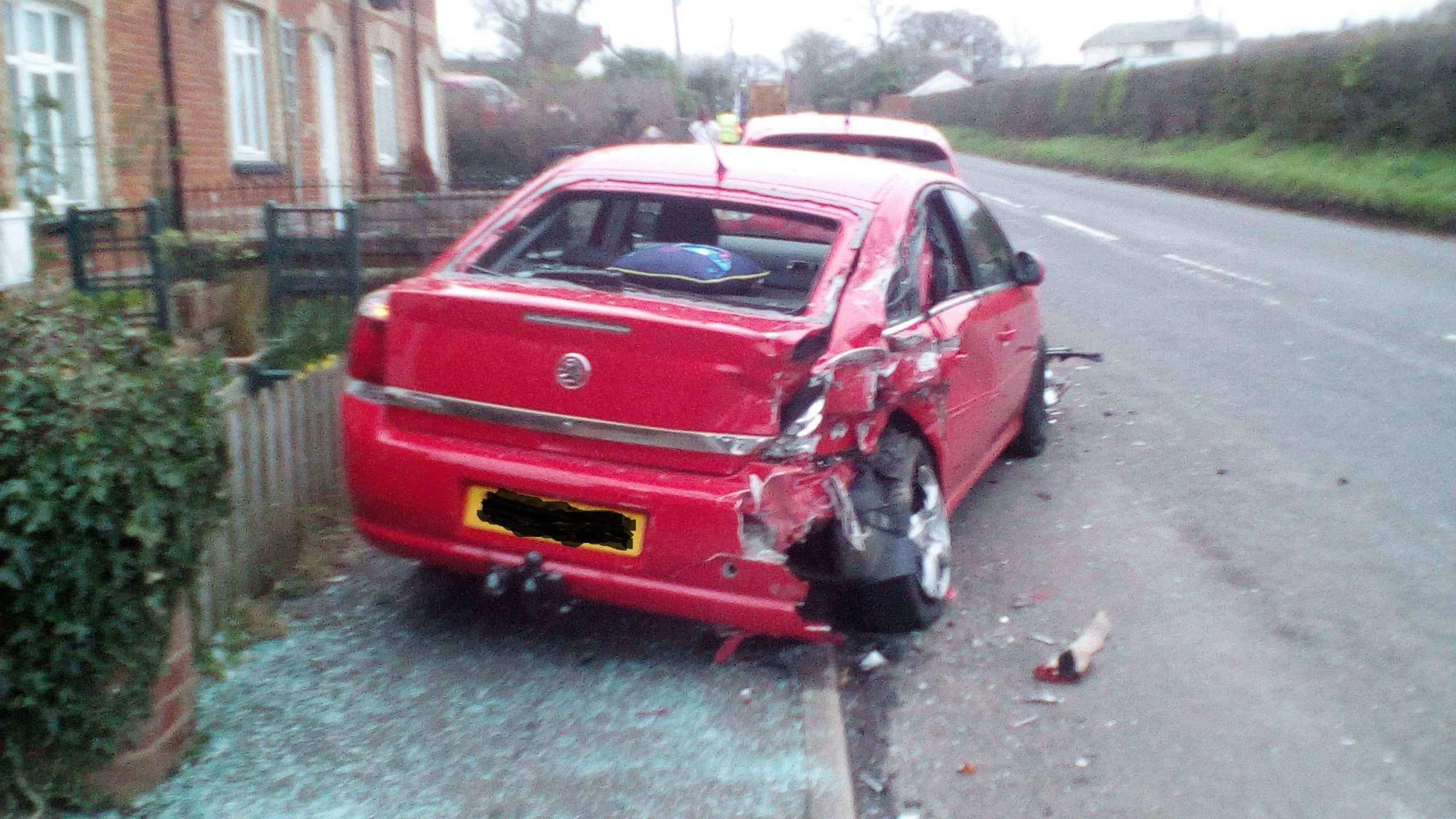 The mum-of-one said she and her New Buildings neighbours park on the road because they do not have driveways or a lay-by.

She believes there have been nine write-offs in as many years, from crashes.

Kim said: “We have no protection and no means to stop the traffic from damaging vehicles in this way.

“We have inadequate street signs. We have a speed light which is too far down the village and even worse are the hatch markings which are making matters worse on a B road and really shouldn’t be there.

“We have no signs saying that we have a zebra crossing in the village and some drivers are using it as a race track.”

Kim has formed a Facebook group, Safer Woodbury, gathering support for her campaign to cut speed through the village.

And she has set up a paper and online petition calling for action, saying residents’ pleas to the authority have been ignored.

“I am compiling village stats at present, but according to reports coming in we have now had at least nine full incidents that involved the vehicle being written off in the last nine years,” said Kim.

“The majority of car drivers, they’re in their metal boxes, they are not looking, they are probably on their phone or eating a sandwich.

“My last car was nearly two tons. He pushed that car into my neighbour’s car. They all had their handbrakes on. Mine had its handbrake on and was in gear, so he actually pushed a solid wall.”

A Devon County Council spokesman said: “Our highways and road safety team would be happy to arrange a site meeting.

“The last five years of our validated records show there have only been two reported slight incidents within the 30mph limits on Globe Hill and Broadway and these were not speed related.”

“The most recent speed data we acquired showed the speed in that area was below the enforcement threshold.

“This is consistent with previous speed data obtained in previous years.

“Collision data for Woodbury shows very few collisions in that locality over the last five years.

“We do take the issue of speeding very seriously and review serious collisions in conjunction with our partner agencies to examine the contributory factors and decide what, if any, remedial action might be required to prevent repeat events.

“Ultimately the roads are owned by Devon County Council and the speed limits are deemed to be appropriate at this time.”